The M.A.D.Gallery unveils the Nixie Machine series by Frank Buchwald, a collection of 18 exclusive pieces.

Frank Buchwald’s “Machine Lights”, an impressive collection of handcrafted lamps, were part of the initial line-up of artists showcased at the inauguration of the first M.A.D.Gallery in Geneva. They have inspired the admiration of MB&F founder Maximilian Büsser from the start, landing Buchwald’s work a permanent exhibit at the M.A.D.Galleries.

The first “Nixie Machine” followed a few years later: a clock created around vintage Nixie tubes, following the same alien-like, sci-fi aesthetic. Introduced in the 1950s, Nixie tubes – also known as cold cathode displays – became a popular way of presenting numerals using glow discharge. The name Nixie is thought to derive from the Burroughs Corporation’s “NIX I,” which in turn was believed to have stood for “Numeric Indicator eXperimental No.1.”

Each glass tube is filled with a low-pressure neon-based gas and includes a wire-mesh anode and layered cathodes shaped like numerals; a separate cathode is needed for every digit 0 to 9. A distinctive orange glow discharge surrounds each cathode when power is applied. Assembled in multi-digit arrays by connecting electronic circuitry to several tubes, Nixie tubes were often used for computers, clocks, and frequency counters. However, these were eventually supplanted by more practicable, less costly – though arguably less charming – displays such as light-emitting diodes (LEDs). 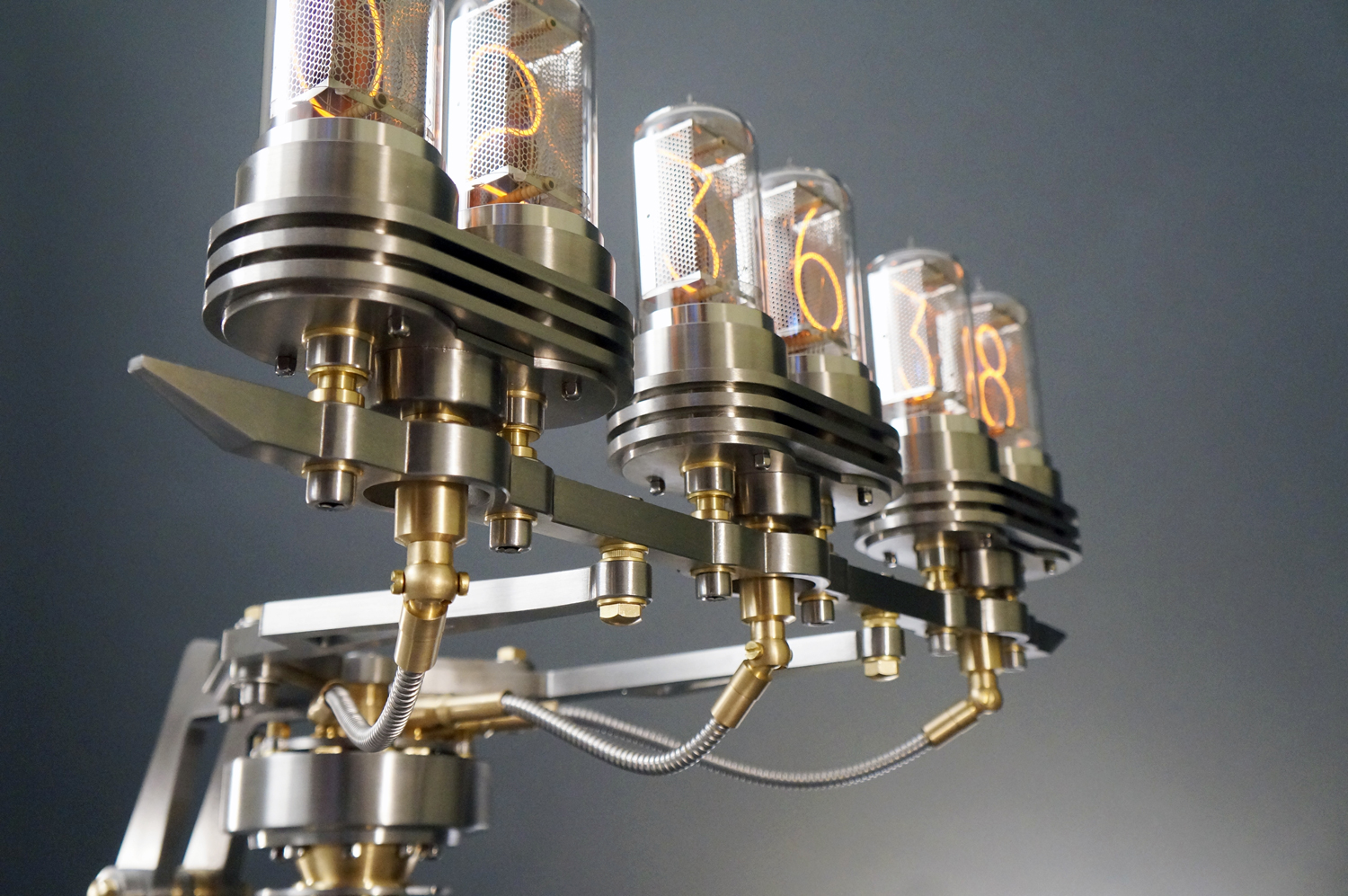 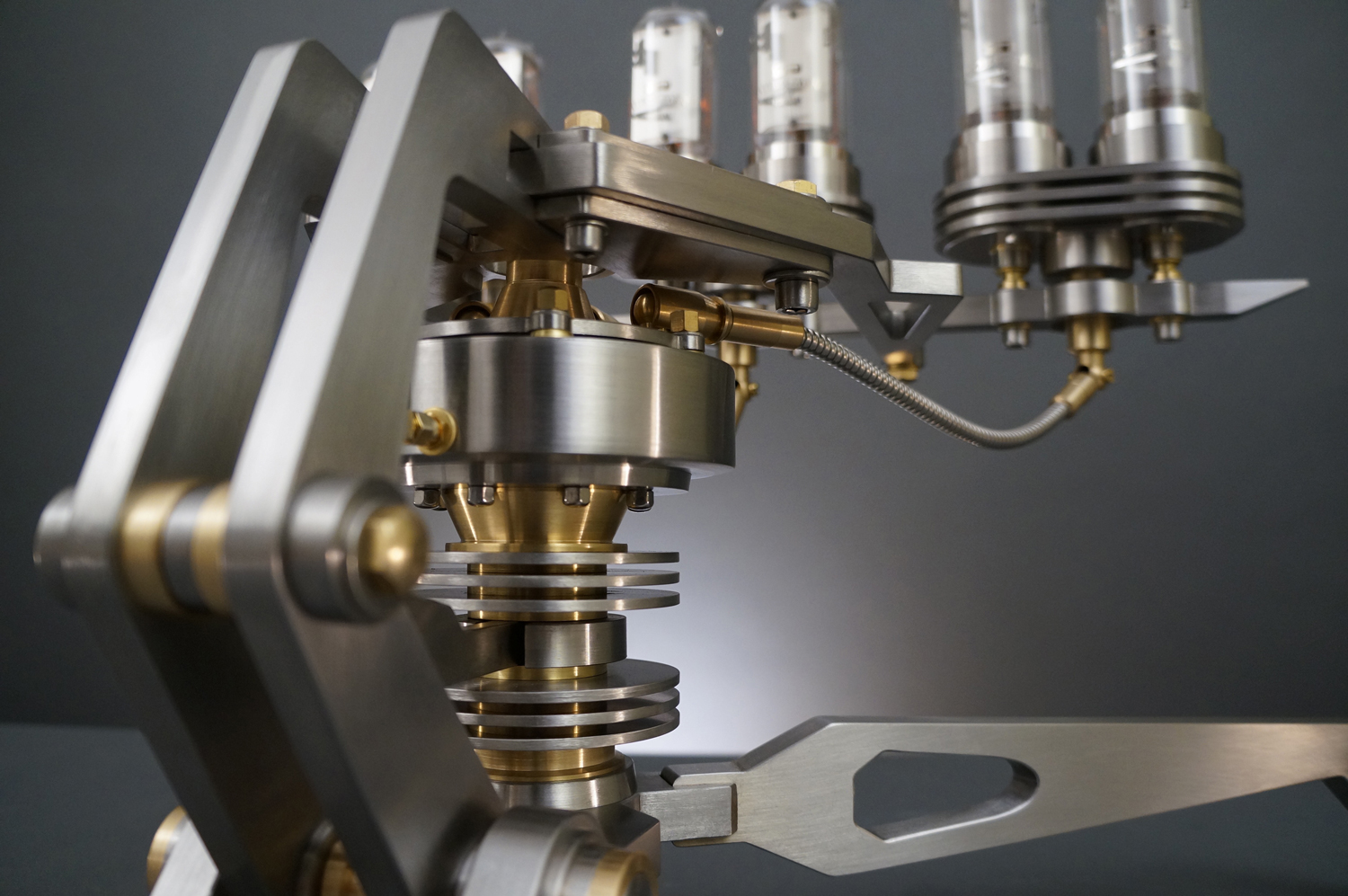 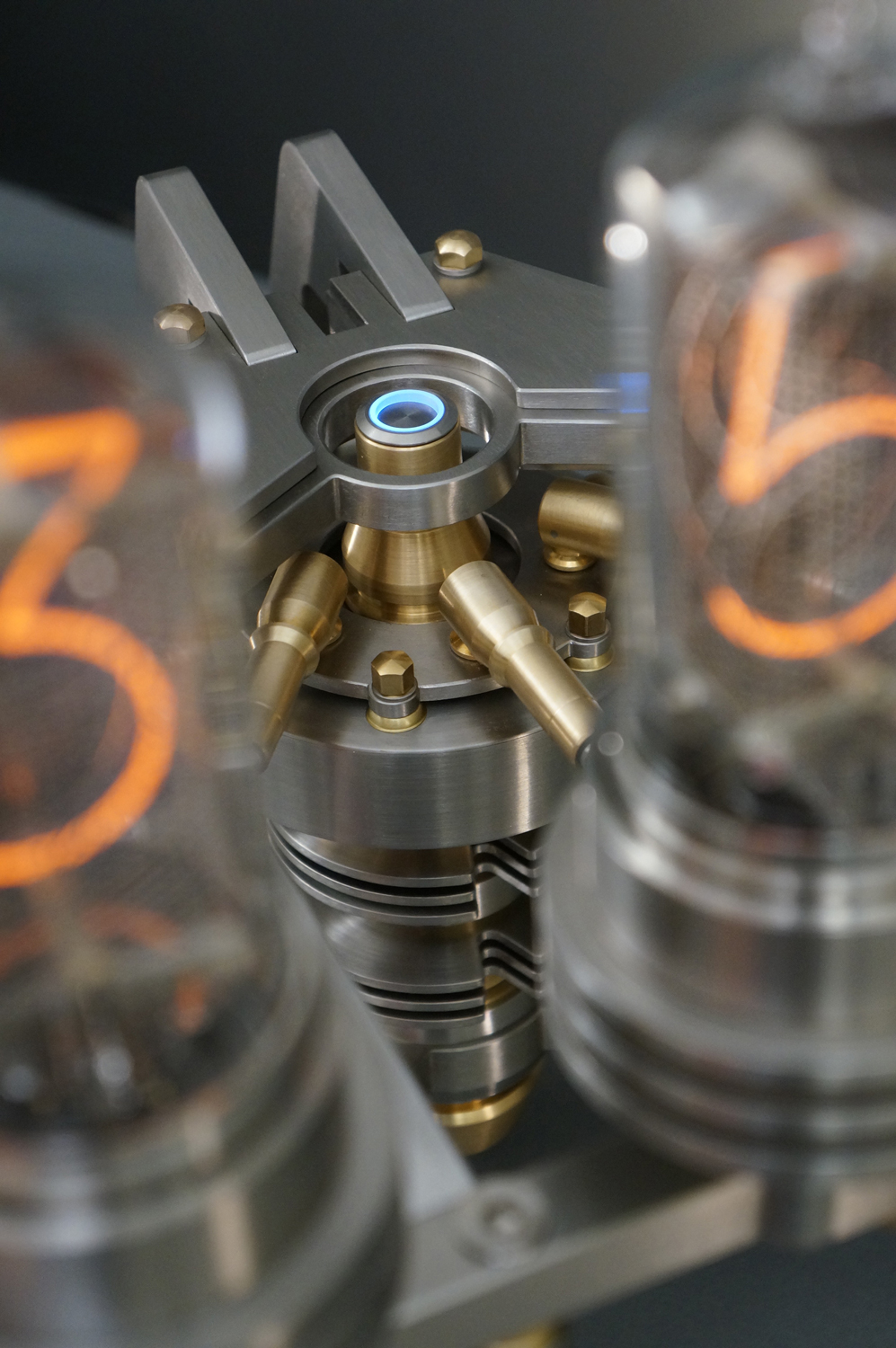 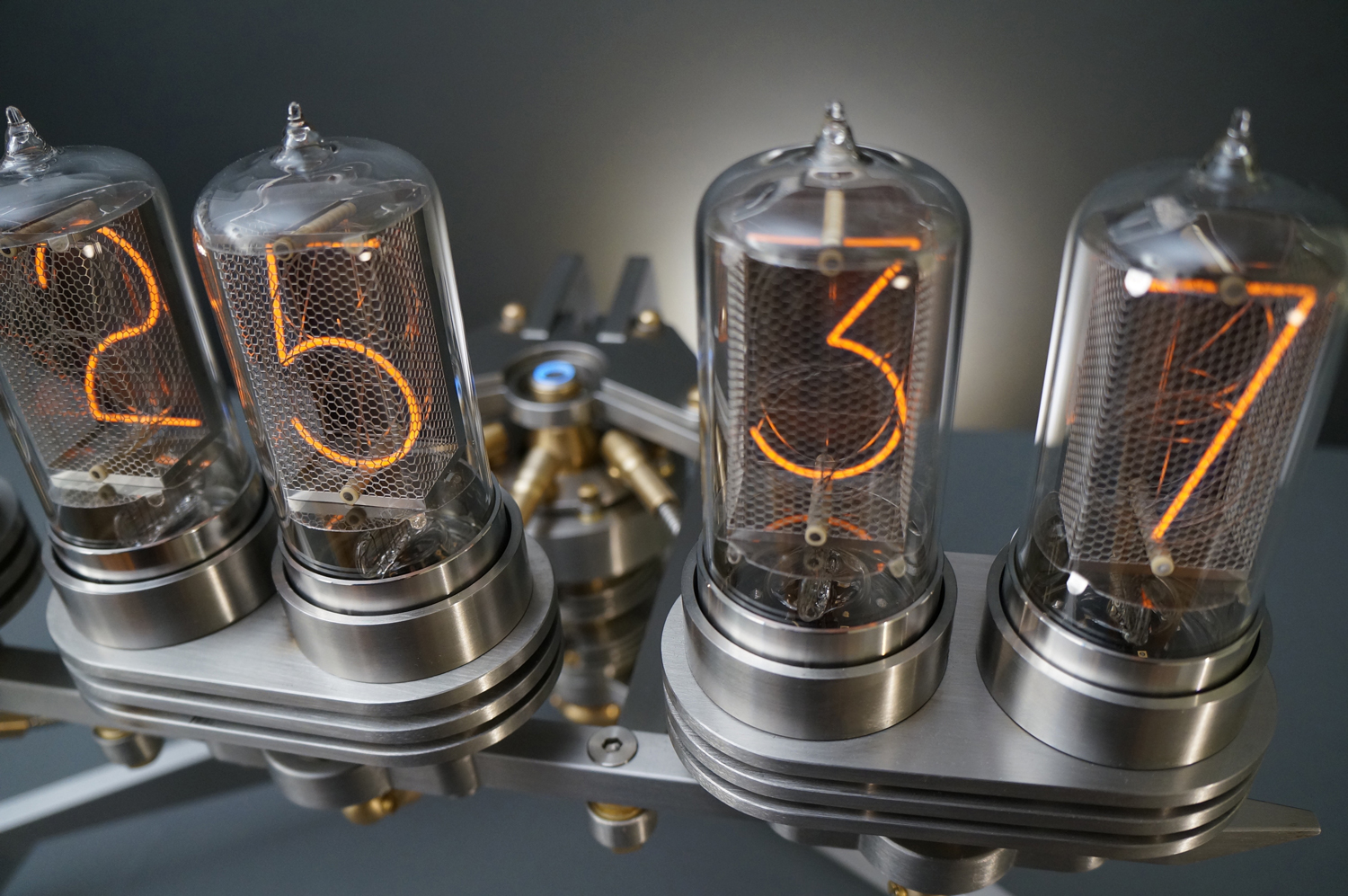 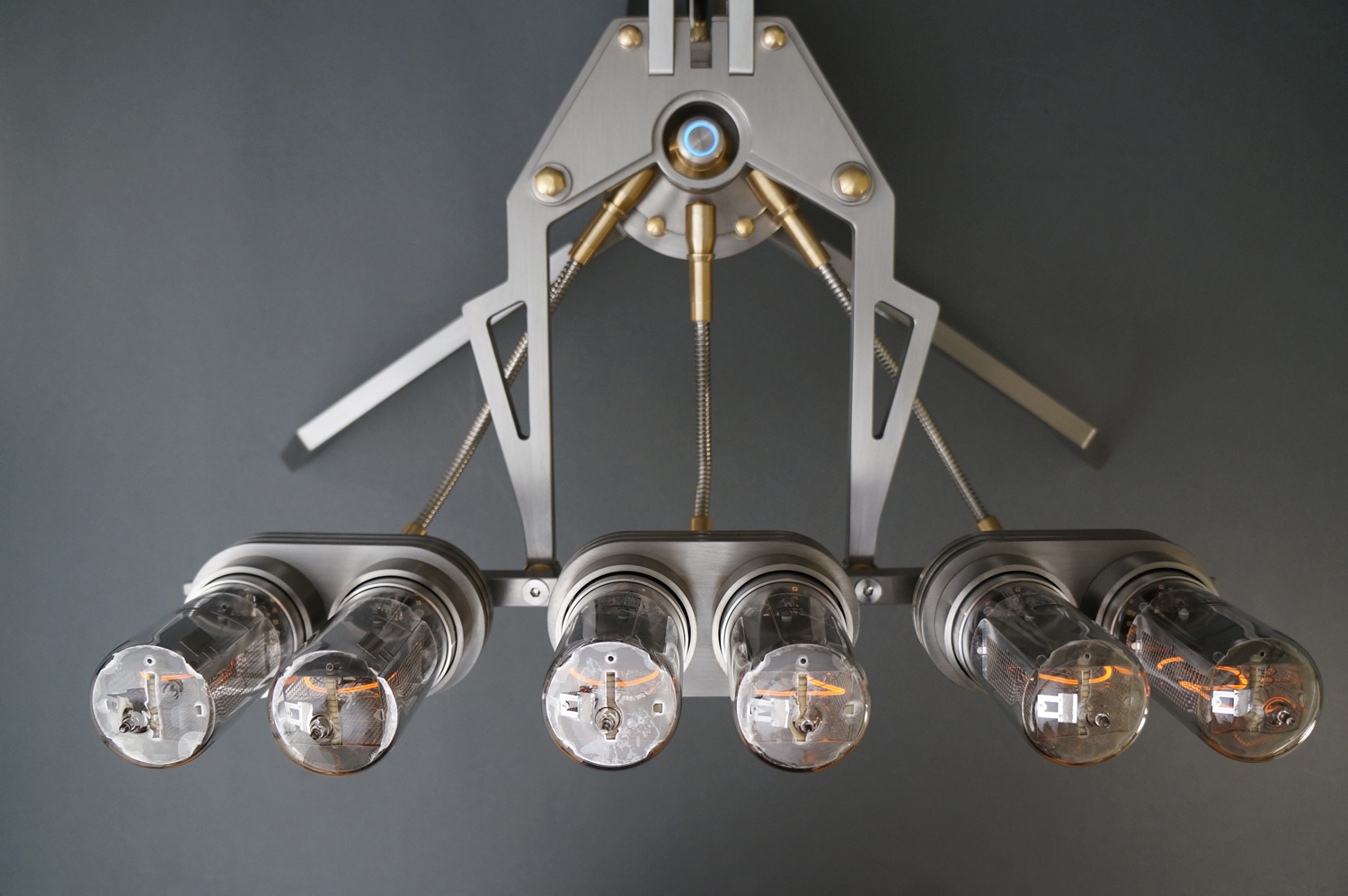 The new Nixie Machine III is the next stage of work from Frank Buchwald. Every detail has been manually handcrafted: from design, construction, and detailed workmanship of the clock to the six Nixie tubes fabricated by Dalibor Farny.

Forging onwards from the first and second editions of the Nixie Machine series, this third and final edition consolidates Frank Buchwald’s design and structural principles into a futuristic work of art. The machine-like character of the design dominates the dynamic emphasis, and the form is compact and vigorous with perfectly executed proportions.

At first glance, the succession of six Nixie tubes seem to hover above the substructure, pulling the eye instinctively inwards to the numeric information floating within the confines of each glass bulb.

Closer scrutiny reveals piece by piece the intrinsic principles comprising the quintessential structure of the machine: a duo-support bracket riveted with massive steel bolts, steel and brass discs to the solid base construction and a central cylindrical tower. Extending from the duo-support bracket is the additional structural support, holding the row of tubes like arms, which ‘hand over’ time to the viewer.

Flexible metal hoses feed the Nixie tubes energy and information from the electronic core of the machine, which also houses the main central switch, illuminated like a blueish preternatural ‘eye’. The unique design of this third edition of the Nixie Machine necessitated the development of a new electronic circuit board with circuit components and 66 contact pins compressed onto a small round surface corresponding to the size of the machine’s central body. This innovation was no small feat for Dalibor Farny, creator and engineer of the repurposed Nixie tubes and collaborator with Frank Buchwald on Nixie Machines II and III. 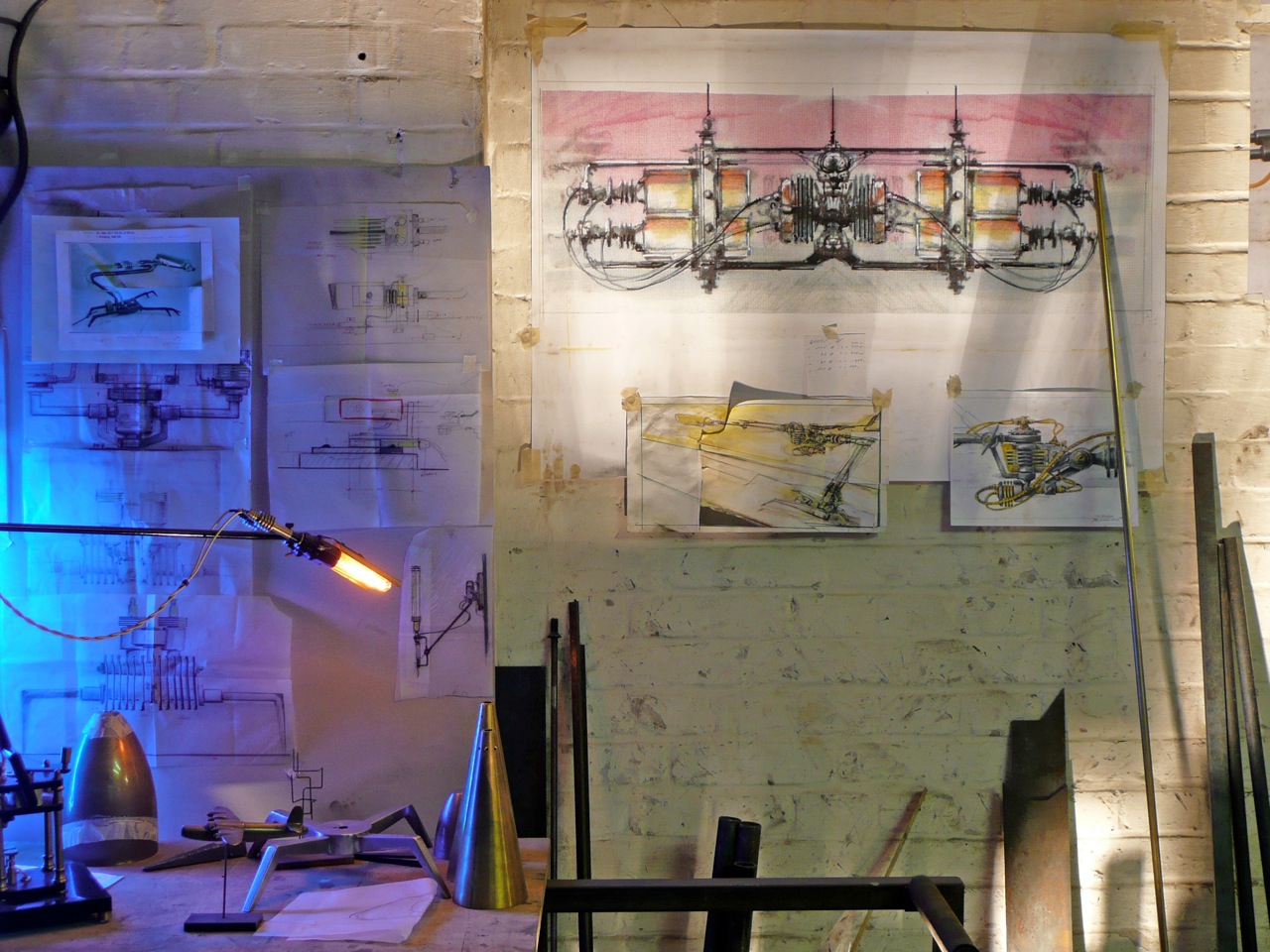 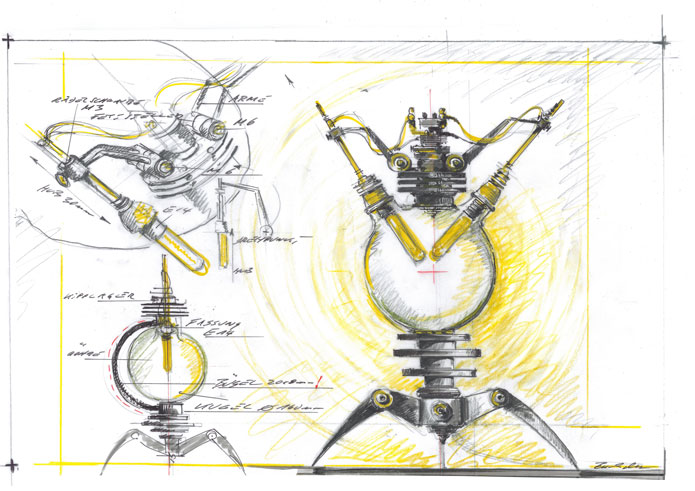 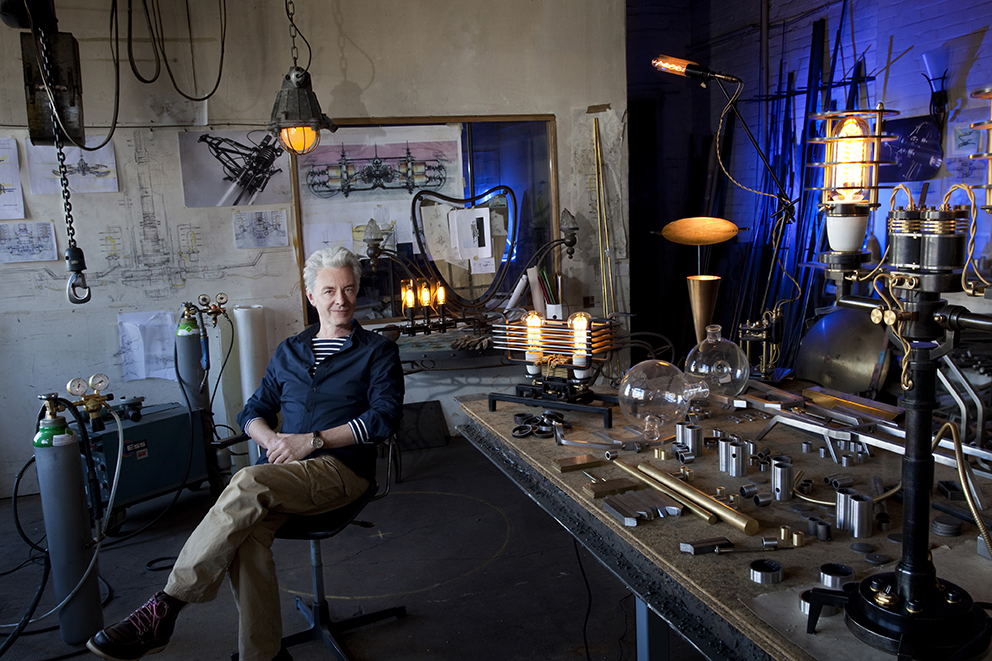 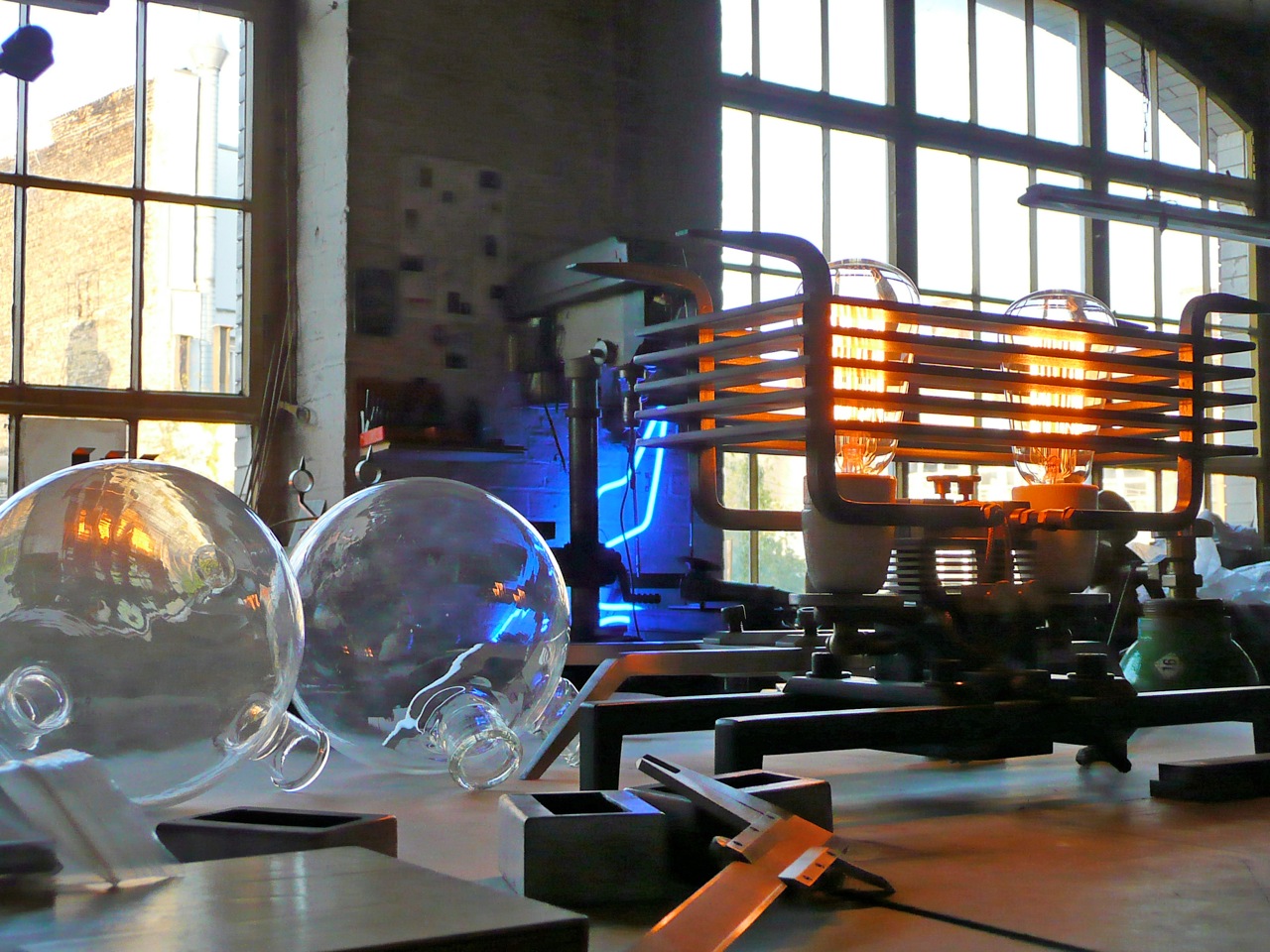 The Nixie Machine III is made of solid stainless steel. All components have been exclusively hand-sanded and polished.

The electronic heart of the Nixie Machine III takes on an unprecedented approach to telling time: at the machine’s core are powerful, wi-fi enabled electronics, allowing internet connectivity and guaranteeing both ceaseless accuracy of time and emancipation from manual setup.

All settings and special features (including scroll effects, day/night mode, digital-light dimming, time-zone settings and more) can be set online – obviating the need for a user manual. The clock itself is, however, autonomous: it can operate both on- and offline.

Describing his creations, Buchwald says, “the attentive observer will not fail to notice that the machine Lights live from a source other than the hand of man. Although I have worked for over ten years on them, I don’t really regard them as my own work: they are beings in their own nature.”

It took Buchwald many years before he felt that the designs of his sculptural lights were moving in the right direction and an even longer time until he could say he was completely satisfied.

“The individual lamp models were not designed spontaneously in a moment of inspiration, It was rather a long groping for a hard-to-comprehend, meaningful form.”

Each lamp is made using more than 200 individual components in an intricate combination where burnished blackened steel throws the rich patina of brass and the warm, yellow glow of visible light filaments into sharp relief. Every brass component is meticulously hand-polished, while the steel is repeatedly hand-burnished with chemicals to achieve an impressive silky black oxidation. The creation is often completed with the addition of a hand-blown glass globe.

After dedicating more than a decade to the collection of his Machine Light designs Buchwald admits, “I have the feeling that the Machine Lights now portray what I imagine them to, I think that they have now reached the right level of completeness and perfection.”

The purpose of Buchwald’s work is to endure through generations. He does not follow a specific design formula, which provides him with the freedom to create objects that eschew modern trends or market requirements, nor does he feed on the positive reactions of customers and art connoisseurs.

Buchwald’s philosophy and inspiration result from past and everyday experiences.

“Pencil, glue and cardboard… railway stations, steam engines… childhood memories. Creativity and enthusiasm form the golden thread that has weaved throughout my life. They’re my fuel.” he explains.

The development process begins with a simple, quick sketch that usually forms the foundation of a new project, followed by several iterations of drawings. Typically, the rough drafts are executed with pencils and marker pens, allowing Buchwald to find the essence of a new object by effortlessly making changes.

“My work has to be open, capable of being quickly modified: any detail can change with one stroke at any given time. It’s an evolutionary process in motion. I follow ideas and impressions. I am passionate about sketching and drawing because they allow me to bring my visions to life. If I don’t manage to make something of the ideas in my mind, then I feel unsatisfied.”

Once the sketch is complete, an engineering draft follows, but the artistic process continues in the workshop. The nature of the material or a spontaneous idea can still transform the original concept, making for an excitingly dynamic process.

For Buchwald, metal is the perfect material with which to work creatively, and he applies a variety of techniques: melting in blast furnaces and shaping by massive machines feels like an “act of creation” for him, bringing energy and power into the metal.