One of the oldest and most respected names in yacht construction, is boldly forging into new territory says Kevin Koenig, who rates the CLB88 as a significant step forward for this tried-and-true builder.

CL Yachts, or more accurately its forebear Cheoy Lee, was founded by the Lo family in Shanghai over 140 years ago. What began as a commercial shipyard eventually branched out into the leisure market. Cheoy Lee was first renowned for its bluewater sailboats then its solidly engineered, longdistance, trawler-style cruisers.

By the 1980s, the builder decided that a move into the larger powerboat market would be a good fit. The latest vessel to benefit from that ancient – in yachting terms – lineage is the CLB88, which made its international debut at the 2020 Fort Lauderdale International Boat Show (FLIBS).

While very much utilising the rich, shipbuilding heritage of the parent brand, the CLB88 remains very much about the future, creating a new identity for the CL brand and attracting a new cadre of buyers seeking adventure-related experiences without forgoing luxury.

CL had planned her debut at FLIBS from the beginning and, despite the COVID-related hiccups that reverberated throughout the industry, she arrived in sunny Florida the Saturday before the show, squeezing into her slip with just enough time to spare. 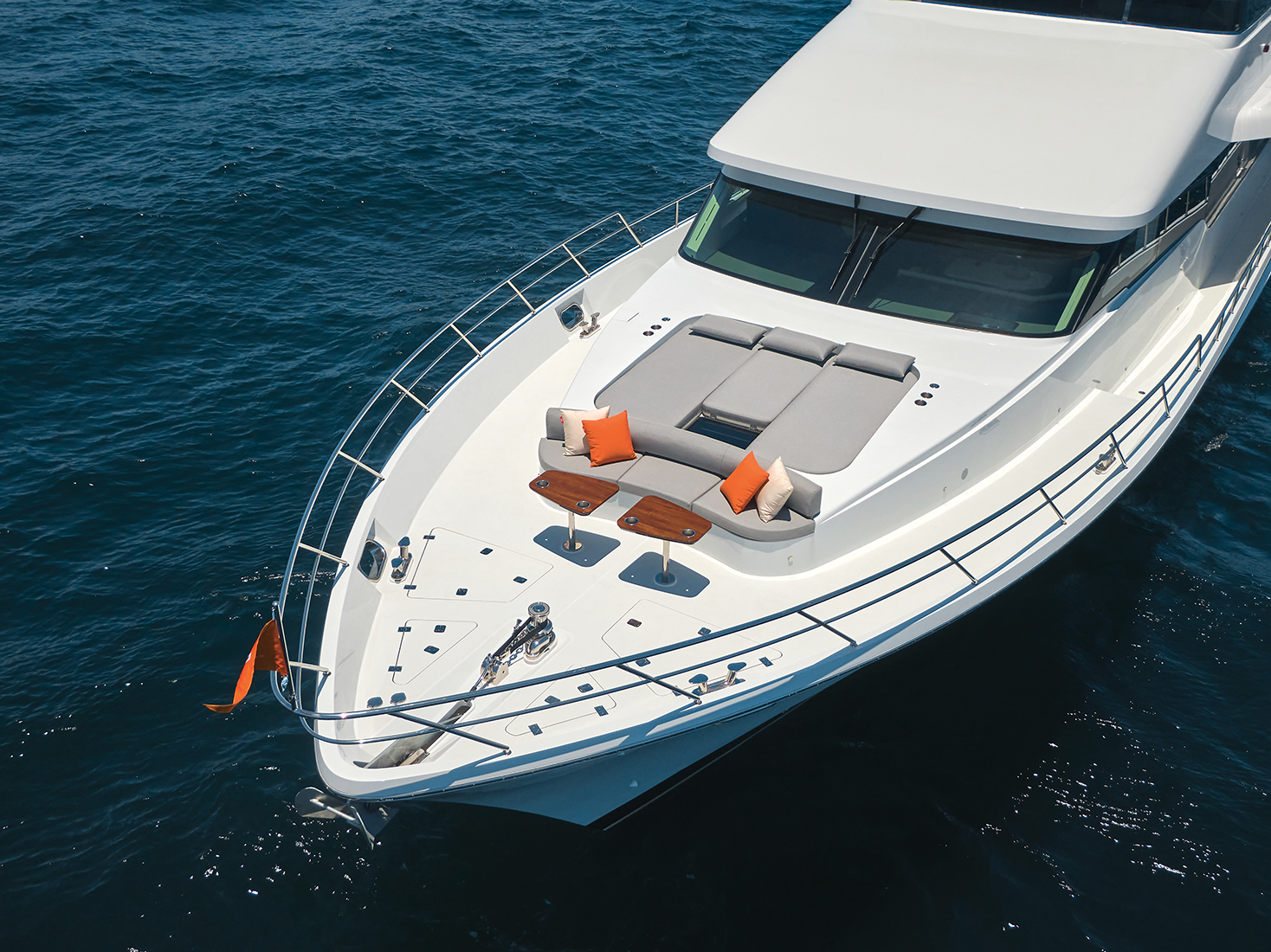 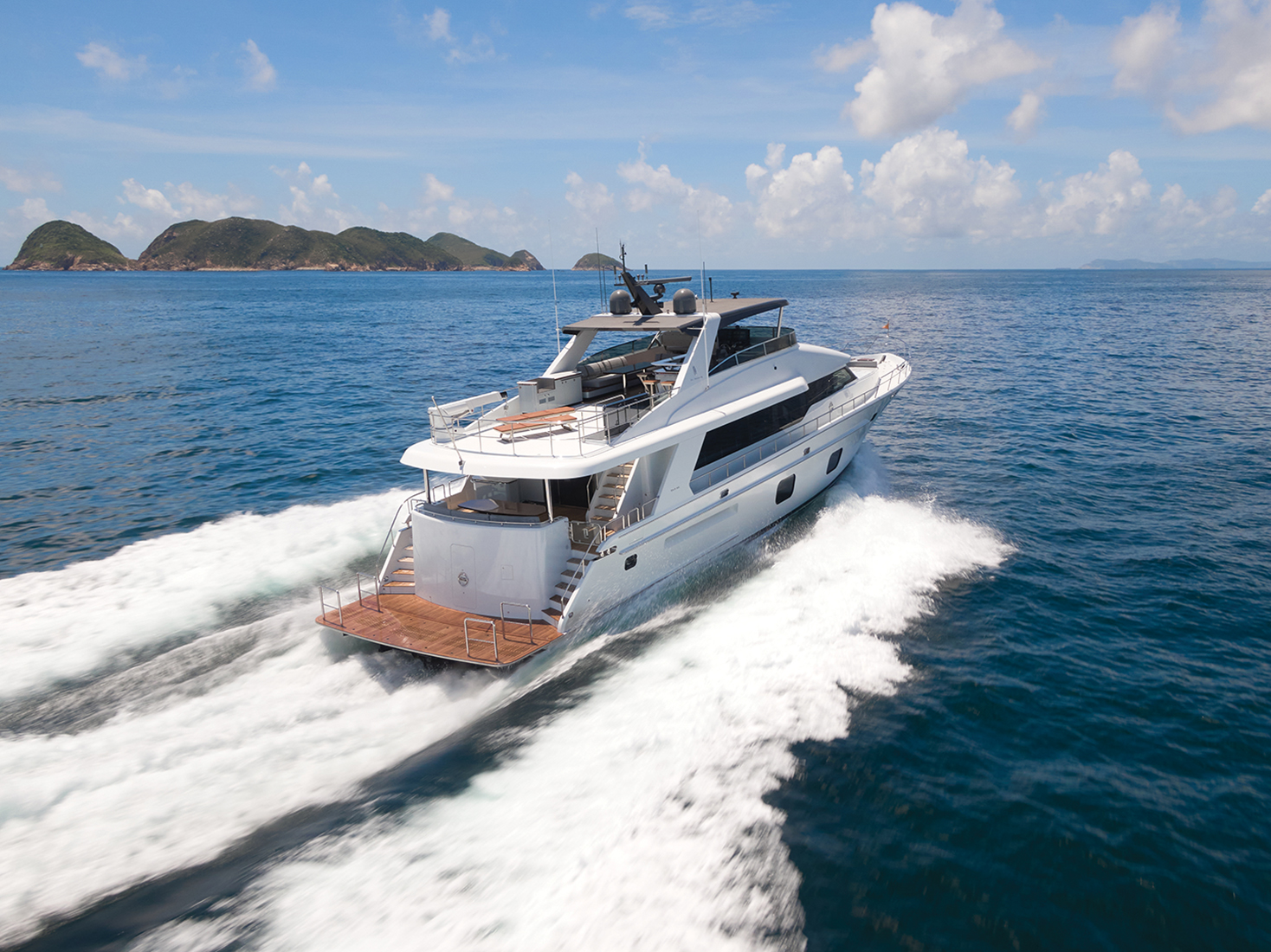 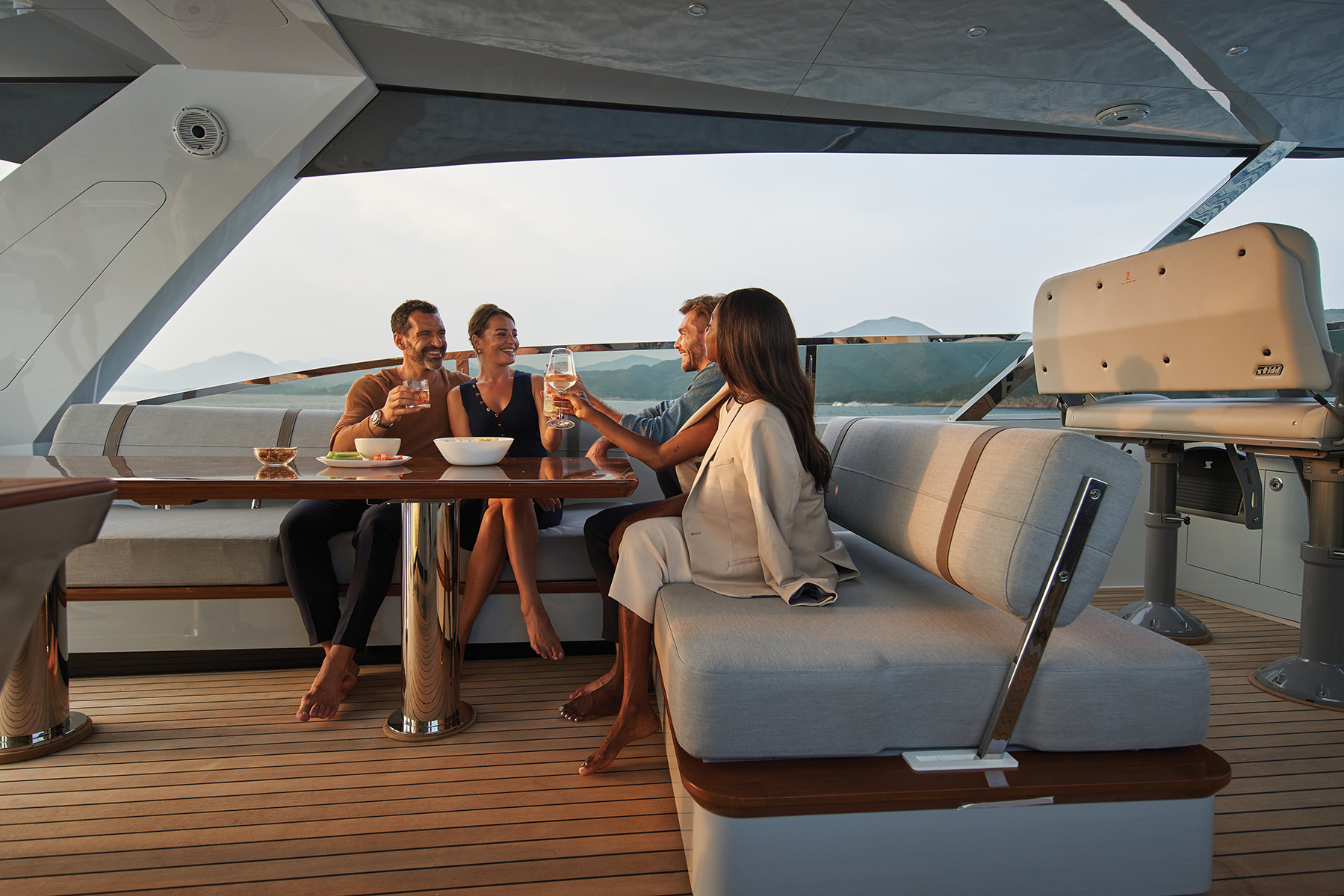 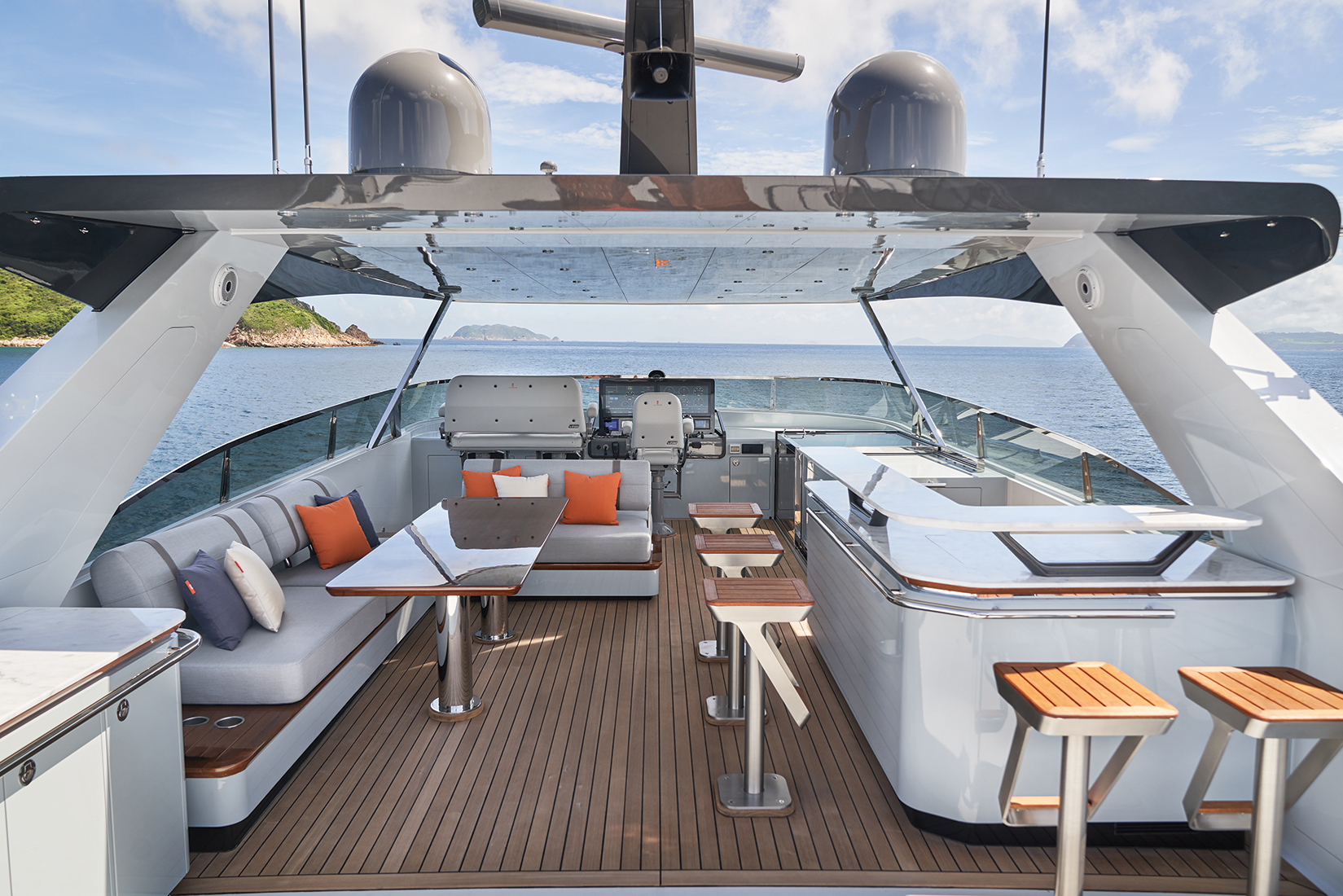 It was a worthwhile bet. The CLB88 proved one of the marquee yachts at FLIBS and managed to entice plenty of interest from potential owners, journalists and envious competitors.

Artful design The CLB88 was designed in conjunction with Jozeph Forakis, a Milan-based New York City native. For his efforts, the CLB88 won a prestigious 2019 Good Design Award for transportation, presented by the Chicago Athenaeum Museum of Architecture and Design. At first glance, it becomes clear why.

The yacht’s lines are at once sleek, yet still call to mind something substantial, safe and seaworthy.

A perfectly straight sheer line uses a delicately curved hardtop as a foil to create something both alluringly feminine and militaristically masculine.

The sense of strength that the boat’s lines convey is no accident. Its construction process was centred around building a vessel that could handle intimidating conditions with gusto, thanks to some of the strongest building materials in the world.

“The carbon fibre is used on the boat where it strategically benefits the construction – on the swim platform, the hardtop and several other areas, like ceiling stringers. It benefits the overall strength of the hull because it’s so strong; we use it where and when we have to.”

Interestingly, Virtanen adds: “We also use it artistically. In the pilothouse, we have a carbon fibre handrail that does little structurally but looks very good. And, of course, there are weight savings too.”

The CLB88 has a resin-infused hull for optimum resin distribution. Gurit Composite Engineering, an outside firm, is charged with that task.

The hulls are then presented to RINA for certification – every single hull is inspected by RINA several times during the build process before the approval certificate is granted. What’s more, every single buyer gets their RINA hull certification, assuring them of their yacht’s seaworthiness and rigorous construction standards. Virtanen clarifies: “Our competitors do not do that.”

Building to such strict standards does come with its challenges, however. “Quite often a client asks why don’t we have as huge a window as one of our competitors. Quite simply, we can’t. RINA won’t allow us to for structural strength reasons.

“It’s sometimes hard for consumers to understand we’re bound by a third party, but it’s our way of assuring the customer that the boat is built right. It’s always easier to build a boat differently than we do, but we never take the easy way out.”

The attention paid to the boat’s seaworthiness and strength during the construction process is further exemplified by the CLB88’s fuel tanks. Made of integral fibreglass, they’re designed to make the hull stronger.

CL also places the tanks very low in its vessels’ hulls, so in a critical at-sea situation, they act as extra ballast. And beyond the added ballast, that hull is rather slippery. Virtanen says owners can expect to see a range of 600 nautical miles at 20 knots with twin 1,600 horsepower Caterpillar C32 ACERTs.

He asserts this legginess is due in part to the generous use of honeycombed foam coring during construction, which helps keep the boat relatively light, displacing just 79,378 kilograms. Those big Cats live in an engine room the envy of some much larger builds.

A white gelcoat sole ensures spills are easily spotted while handrails abound for stability when traversing the area in a seaway. Access to both of the engines, as well as the twin 53-kW Kohler gensets, is excellent. There’s even a sink and a standard hatchet for emergency use. Down here, it’s clear that CL Yachts has thought of everything. Other areas of the boat exhibit the same level of attention to detail.

The spacious saloon has a day head situated aft, which makes it equally easy to access whether you’re indoors or luxuriating in the open breezes in the cockpit. 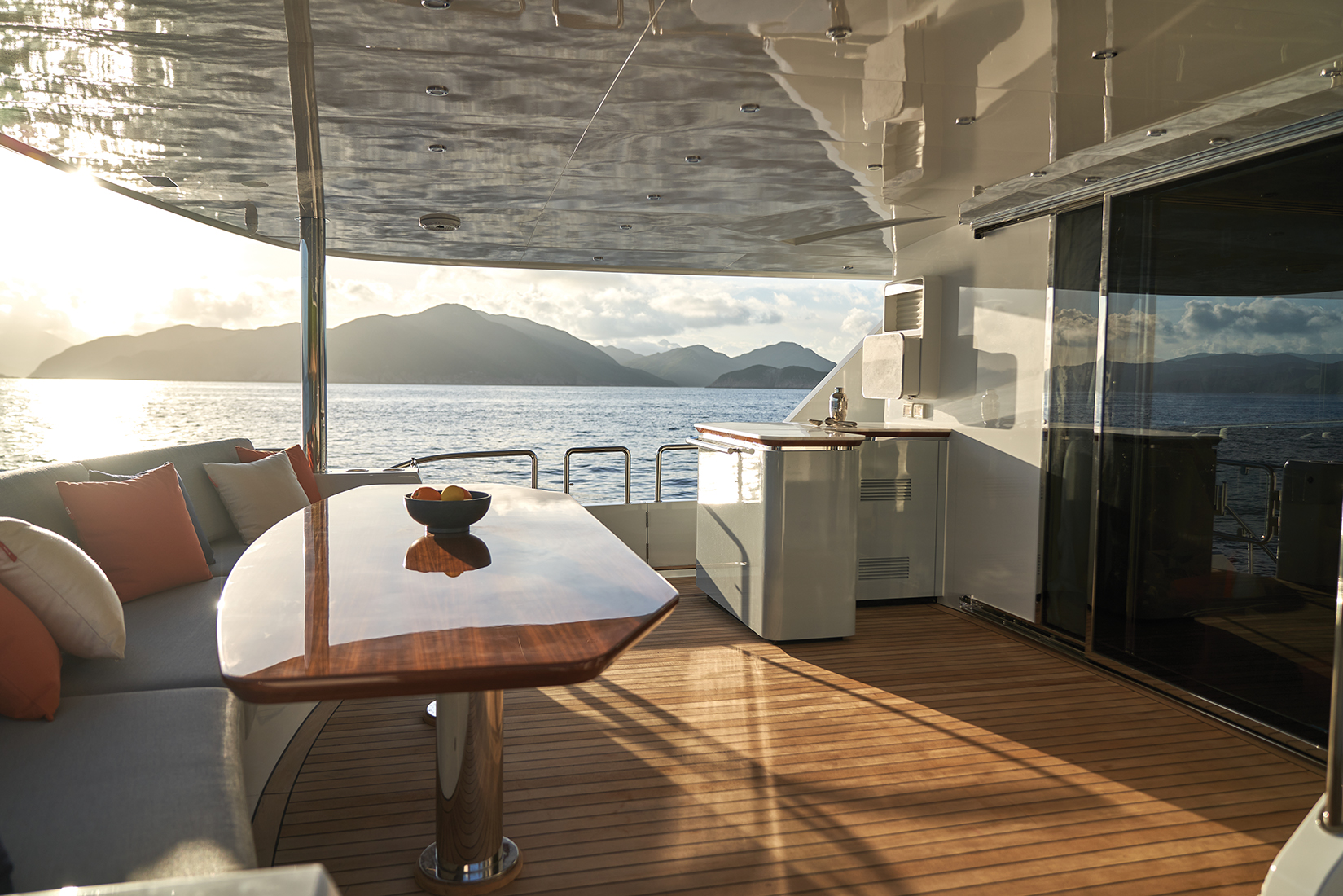 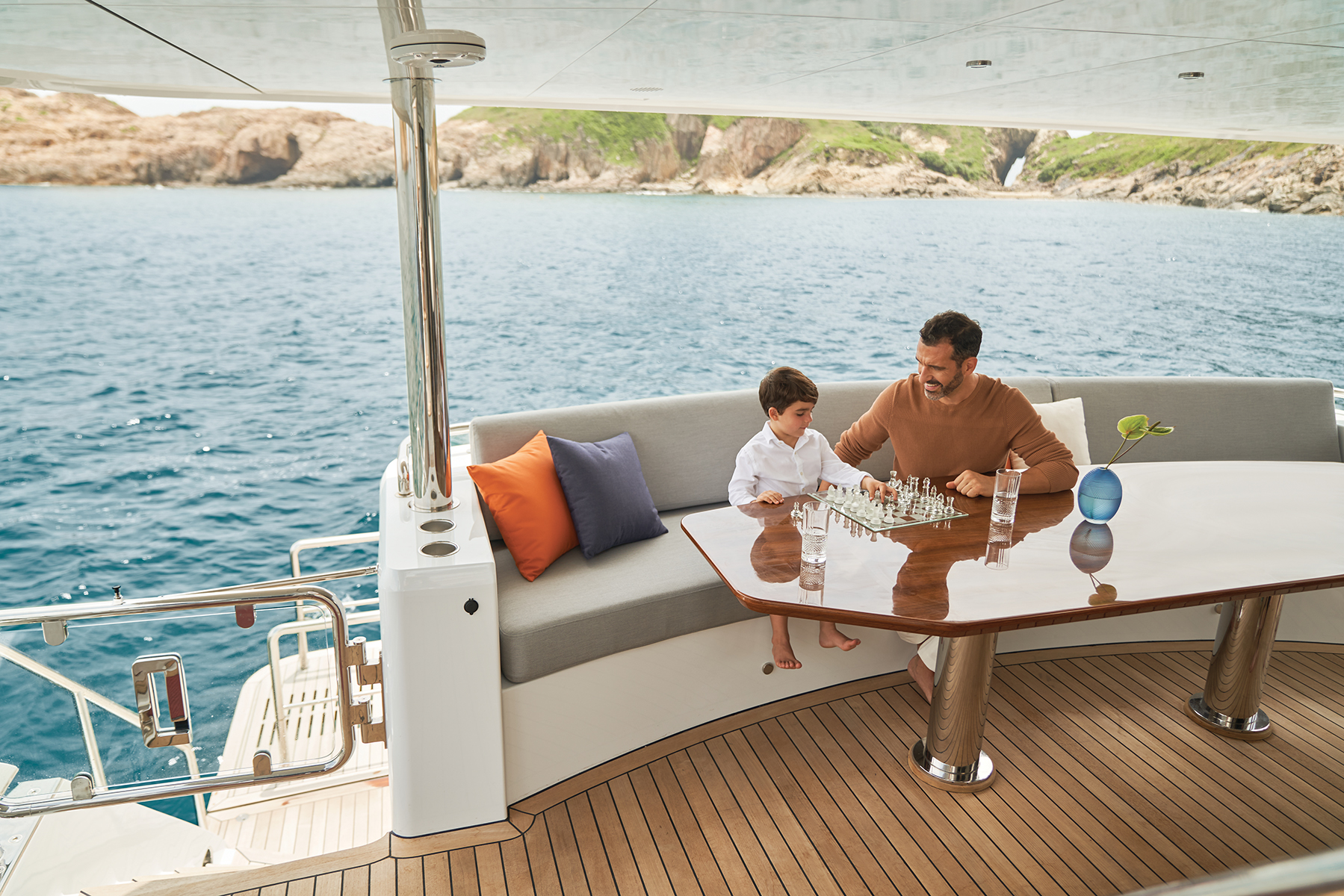 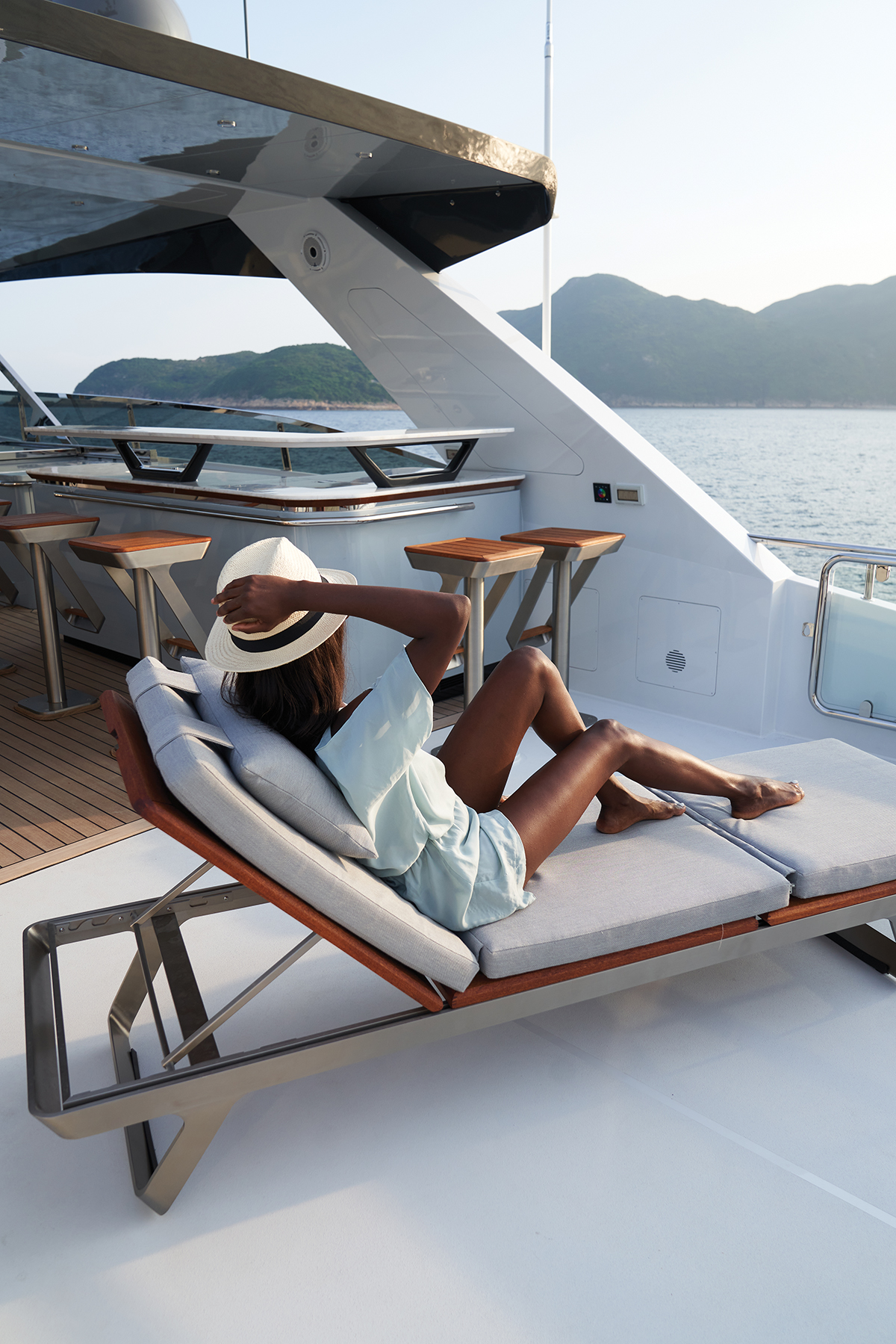 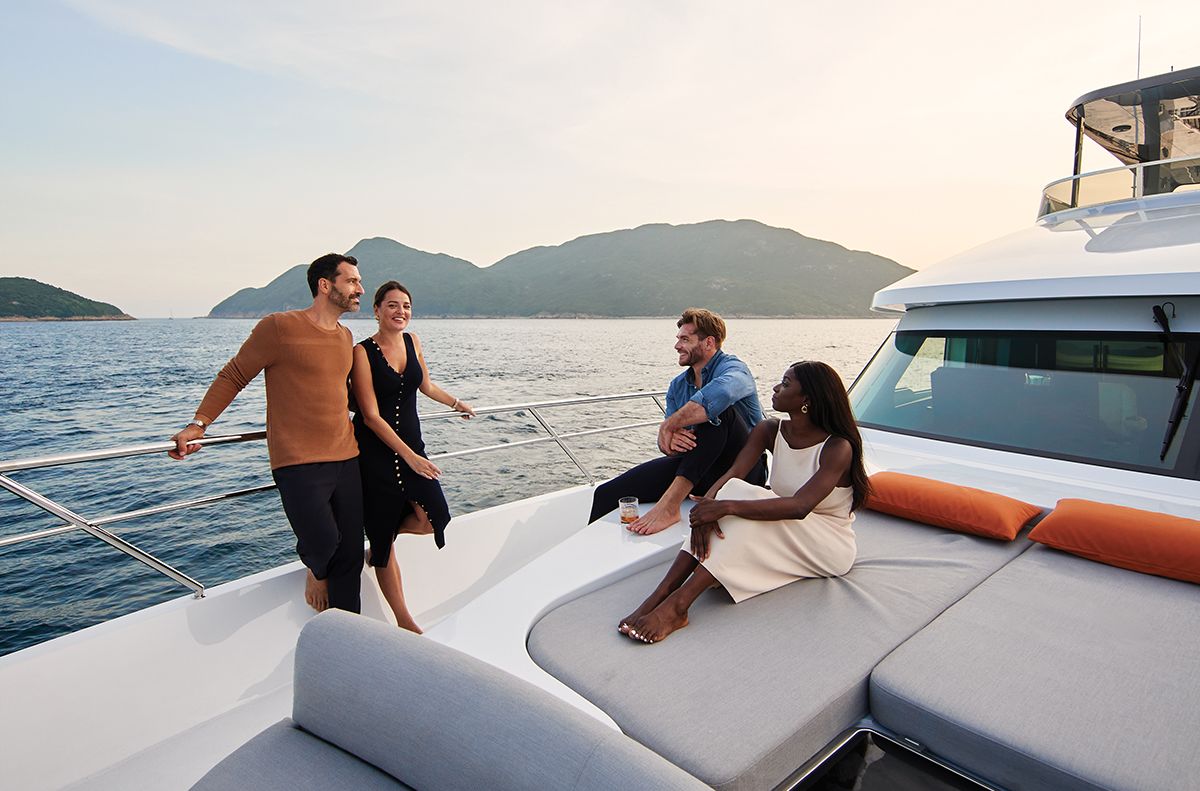 Sealed teak (good in case of spills) on the saloon sole is mirrored above by teak on the ceiling. The nexus for many of those spills may very well be the wet bar to starboard, while a dining table to port easily seats eight. The galley forward of the dining table speaks to the 88’s ability to be crewed or owner-operated by a particularly able client.

The cooking space can be open or enclosed thanks to an electrically operated, opaque glass panel.

So, if the chef is included in the party, they can easily join in the conversation at the table. However, if more privacy is desired, that can also be arranged.

A breakfast nook forward of the galley enjoys excellent natural light thanks to the raked windshield. It’s a great spot for a quick nosh, and also doubles as the best place to keep the captain company while under way as the helm is directly to starboard.

That helm benefits from the windshield in a different way as sightlines are excellent. Twin Garmin screens and an easy-to-use CZone control panel are surrounded by more of the carbon-fibre accents to which Virtanen earlier referred. 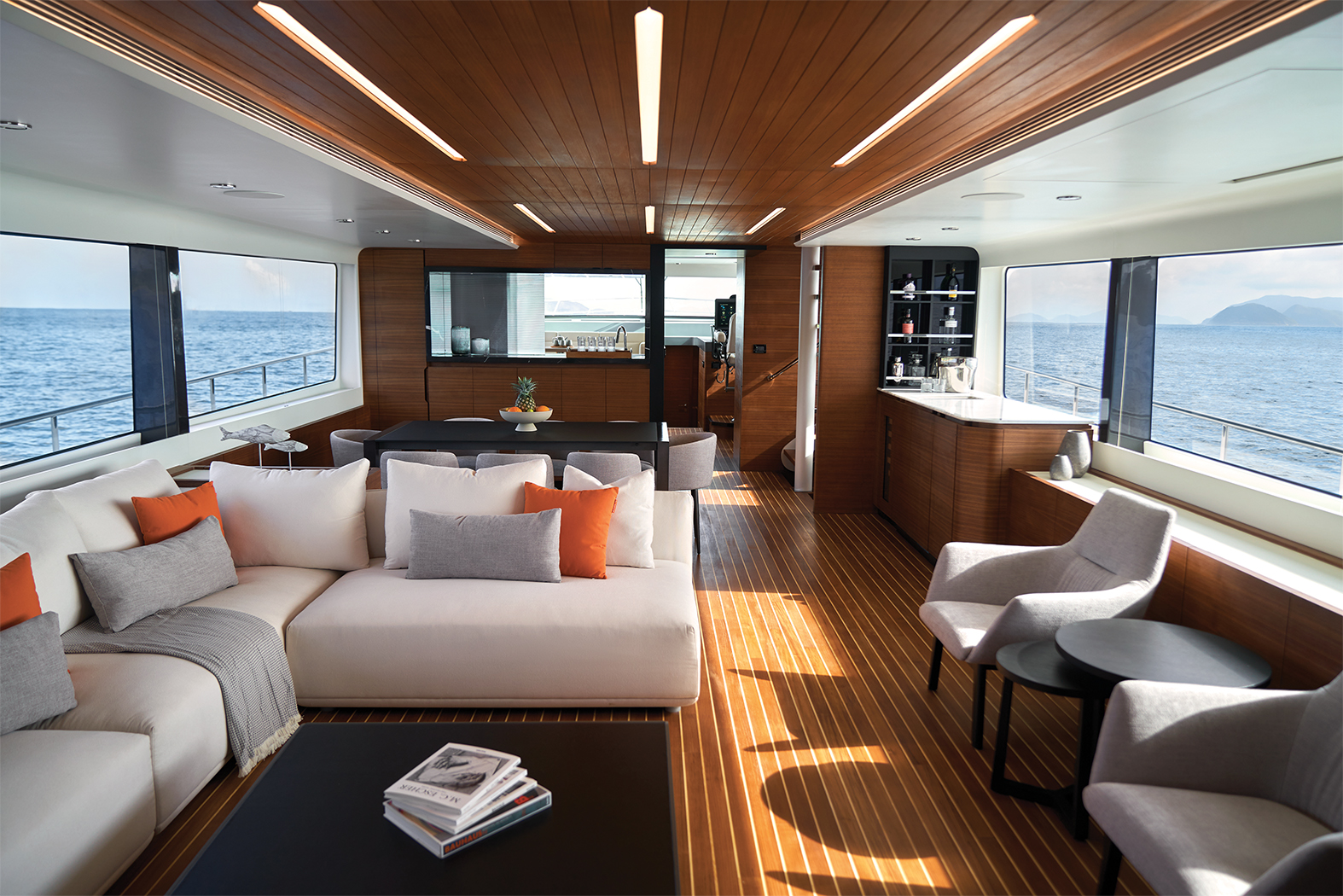 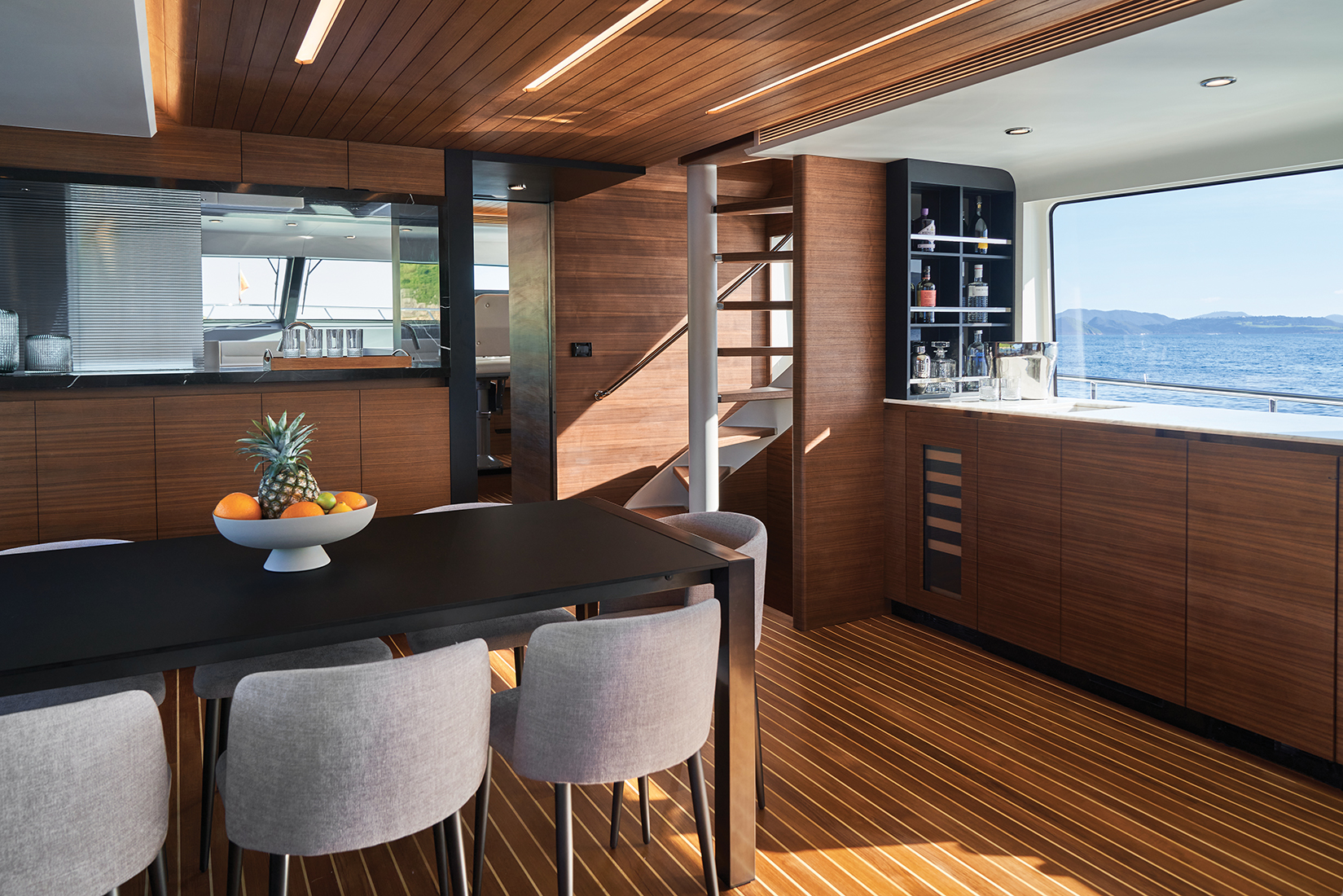 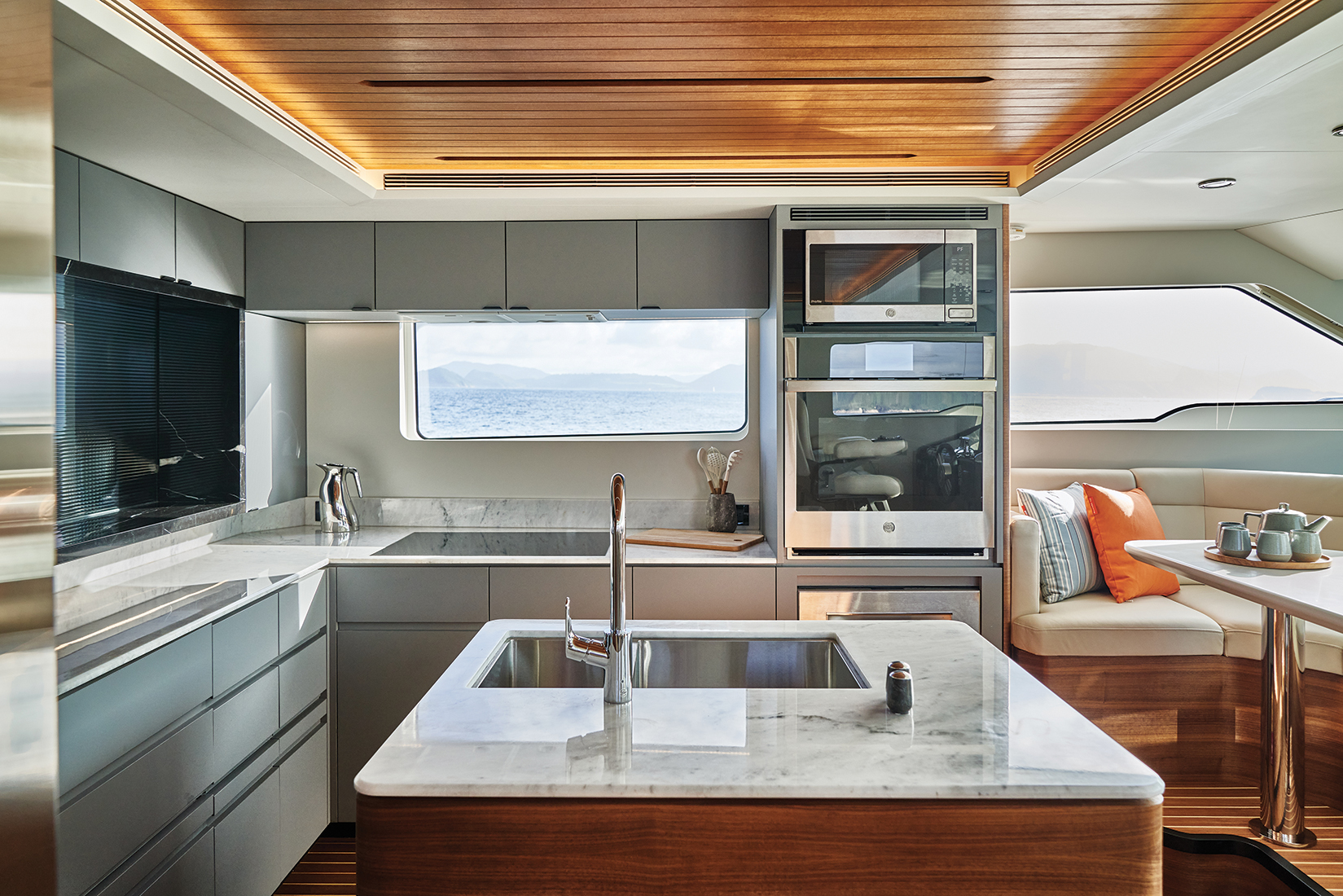 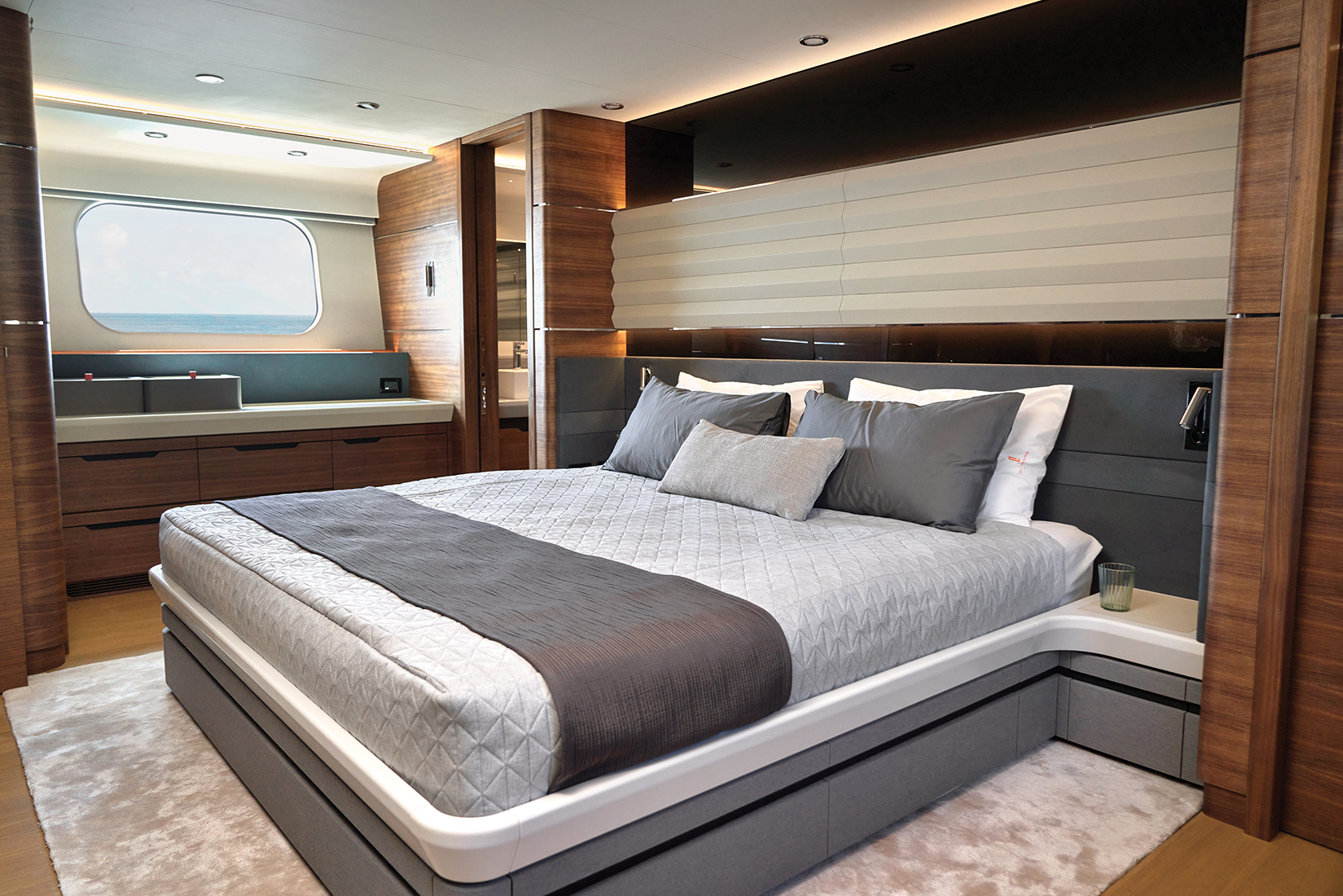 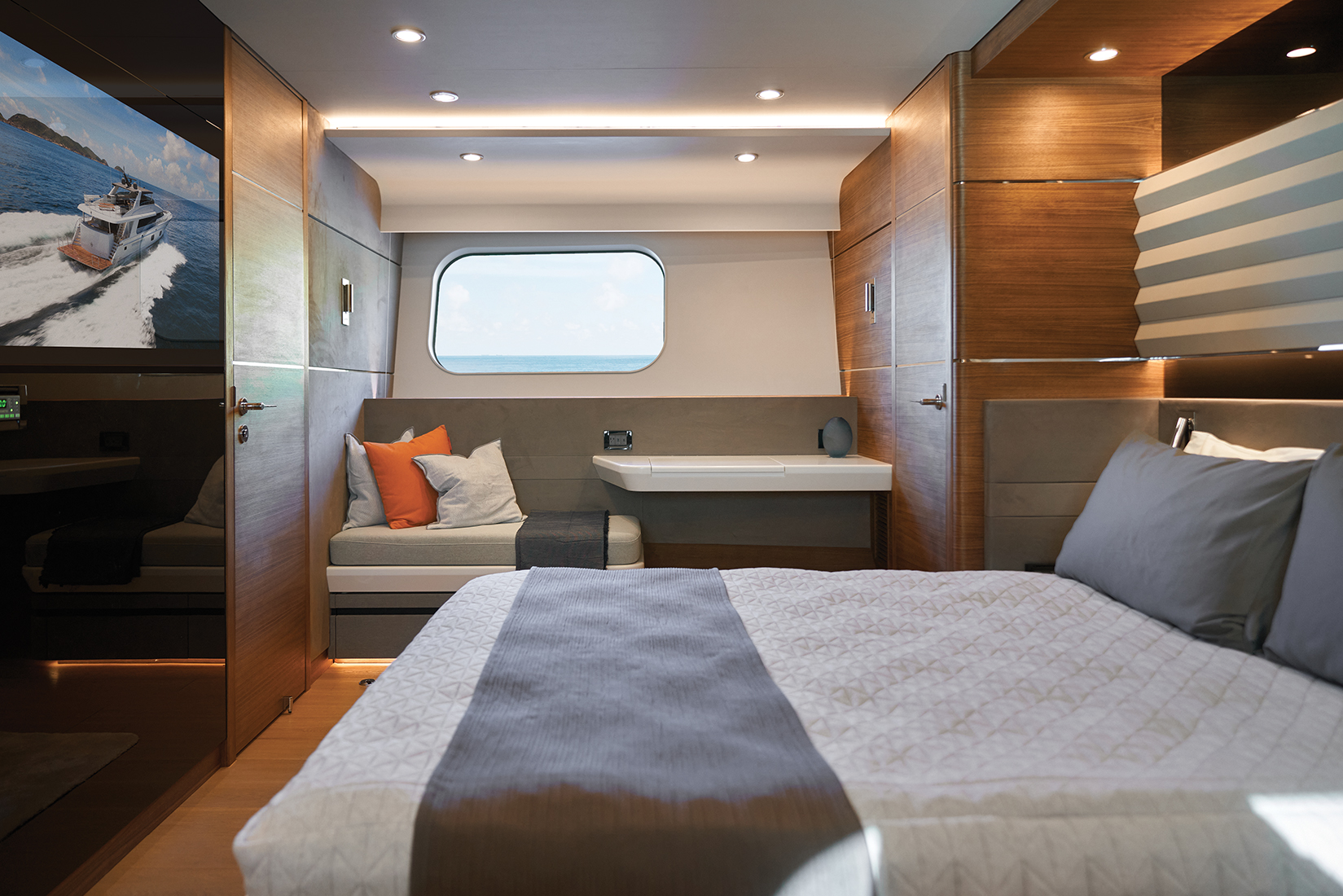 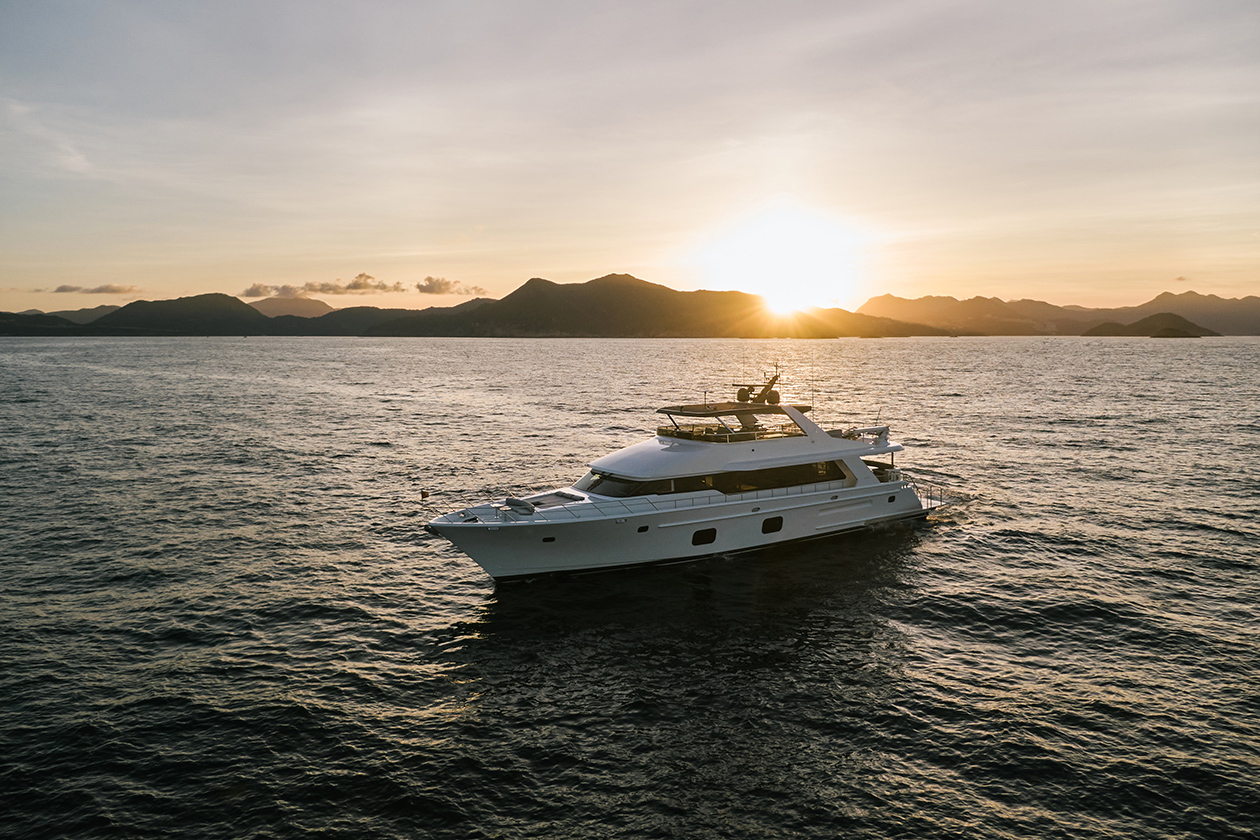 Down below, the CLB88 has a somewhat unorthodox layout. A full-beam amidships master is well-appointed with a plush grey carpet, a walk-in cedar-lined closet, a rain shower with over 2-metres of headroom and a full-size island king. All that is about on par for a yacht this size. What is different is that the VIP effectively mirrors the master, just a bit forward.

That space is also full beam, and feels much like the master, just at a slightly smaller K-factor. For example, headroom in the VIP head is 1.98 metres.

Moving forward on the accommodation level, there is a washer-dryer to starboard that strongly hints at this yacht’s ability to travel long distances.

A guest with twin berths is to port while a large forepeak cabin could effectively function as a secondary VIP. The highlight of the CLB88’s outdoor entertaining spaces is the massive flybridge, which benefits from an overhang that extends fully aft to shade the cockpit.

The flybridge is locked and loaded for a party. At amidships, an alfresco wet bar with seating for five will help orchestrate any social affair, while a second dining table nearby handles mealtime duties.

Aft, twin chaise longues with pillows upholstered in CL’s signature orange make prime real estate for sun worshippers as the rest of the deck is shaded by a carbon-fibre hardtop.

A crane for the 88’s tender can be located here, but most would probably opt to have it on the submersible swim platform.

The super-lightweight construction material up top helps keep the yacht’s centre of gravity low, while the hardtop is a component piece that serves double duty by making the passengers more comfortable, aiding in the 88’s seaworthiness.

The combination of engineering prowess, design innovation and meticulous craftsmanship means the CLB88 succeeds in its stated purpose of reimagining the classic motor yacht – the final result is nothing less than an effortless display of mastery. CL may make it look easy, but in fact, it was hard-earned over decades. Surpassing expectations takes time, but it’s time well spent.