An action-packed weekend of fishing in the 2020 Riviera Port Lincoln Tuna Classic has once again proved the fishing grounds off the Eyre Peninsula as superb.

In its 14th year, the Riviera Port Lincoln Tuna Classic is a 10-kilogram line class competition that shines a light on sustainable fishing practices. It is a catch and release event that only targets Southern Bluefin tuna and is the first of its kind in Australia to disallow three-pronged fishing hooks.

Twenty-three boats with crew from far and wide took part, but it was a mix of local knowledge and a sense of adventure by the skippers of two Riviera luxury motor yachts that saw them haul in the major trophies, including a record $37,080 cheque for the heaviest fish as part of the Calcutta bid.

At the shotgun start on 21 March, while most vessels headed full throttle in a westerly direction, one hung back before taking off east towards Roslyn Shoal.

The move paid off and earned David Buckland a back-to-back win for Overall Champion Boat with 45 fish caught on Longshot, a Riviera 51 Flybridge.

“It was a chance and it paid off,” Mr Buckland said. “We knew there were tuna elsewhere, but I’d been out to Roslyn Shoal the year before and done well there. I thought a few more boats would have followed us this year, but for a while we were only three.” 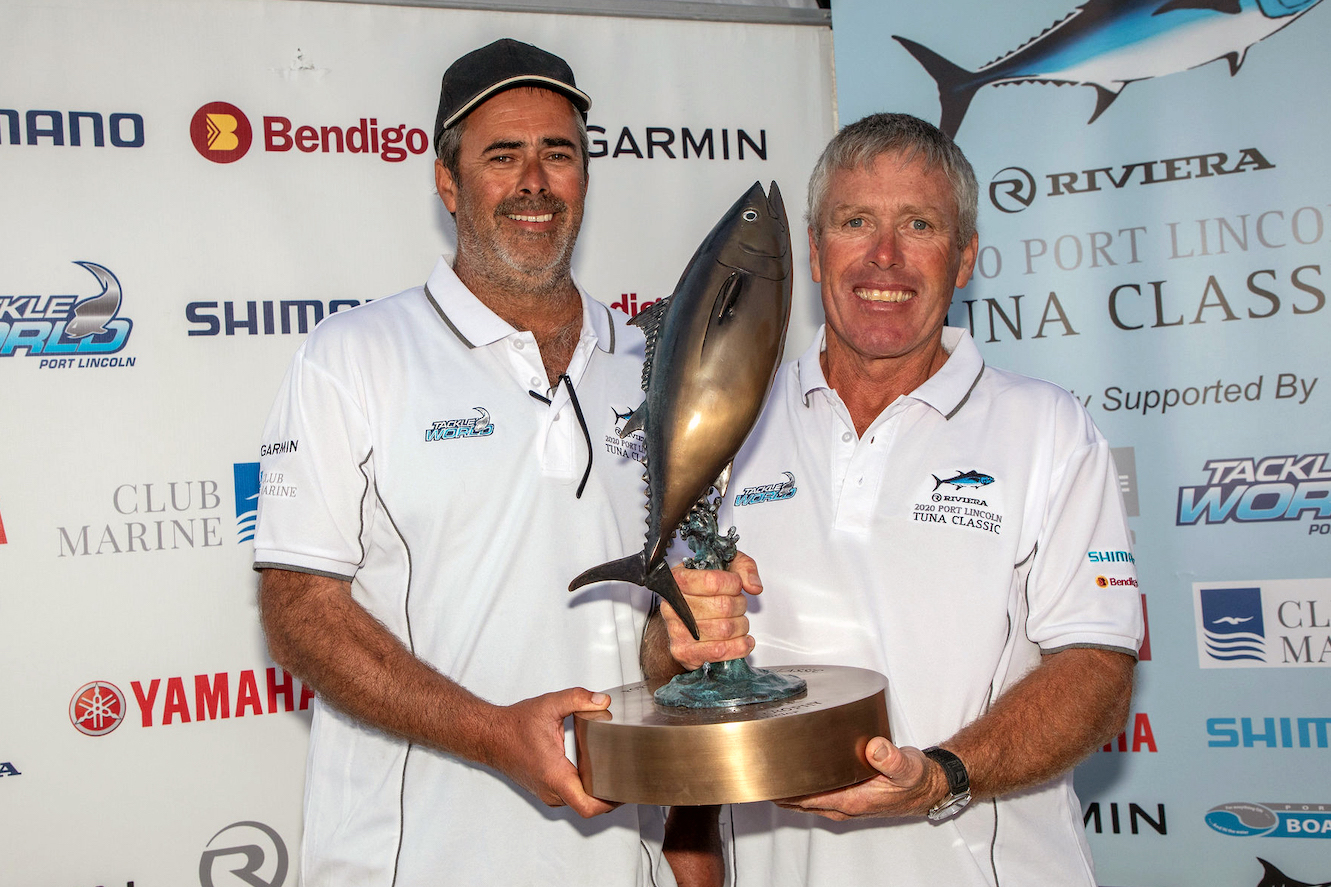 The fleet assemble as they await the call for the official start before heading for open sea in the chase for success at this year’s Riviera Port Lincoln Tuna Classic.

Mr Buckland said within minutes they’d worked out what lures the tuna were biting.
“We put out four lines and started getting them hand over fist.”

Longshot is the beloved fishing vessel of the late Ron Forster, who passed in August last year. He was a founding member of the Tuna Classic and a perpetual trophy has been created in his honour.

“Ron was an avid fisherman and his boat has been set up for fishing. We went out in his honour and it was a fantastic weekend. It was great to get away for a couple of days given everything that’s been going on. The best place to be is on a Riviera out at sea.”

A total of 145 fish were caught and released across the weekend.

Weighing in at 15.8kg, it was Gilbert Le Brun’s bluefin caught on Laila Jane that won the Calcutta and secured $37,080 for himself and the crew on the Riviera 525 SUV.
Like David, Laila Jane’s skipper Mark Waller made the decision to take a risk and not follow the rest of the fleet.

“We could’ve ended up with absolutely nothing and just been out there catching whiting,” Mr Waller said. “It took us a good half an hour going backwards and forwards before all of a sudden we ran over some fish and away we went!”

“We were quite shocked at the trophy presentation; it was nearly a clean sweep. That’s fishing,” Mr Waller said. “Right spot at the right time. We just got lucky.” 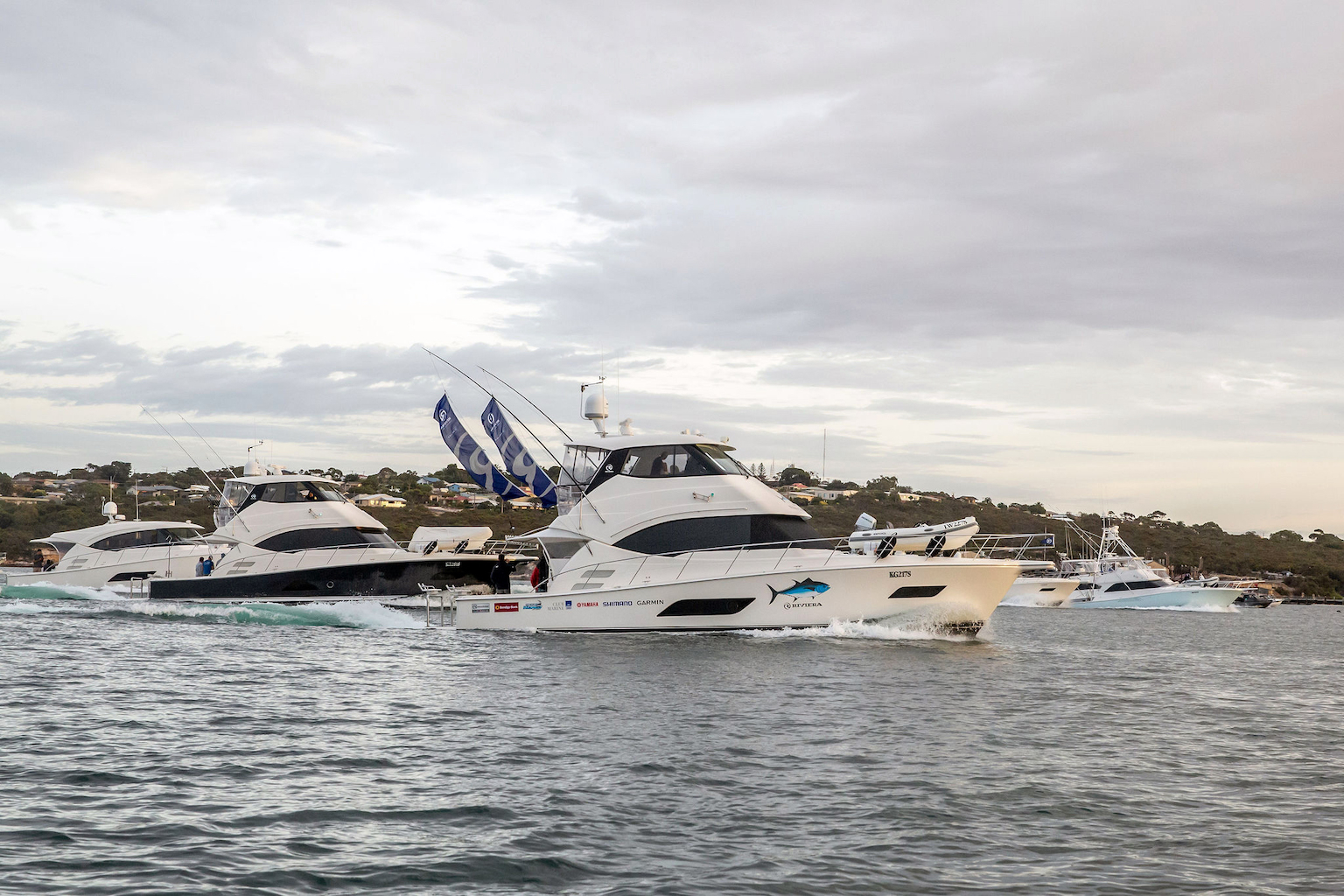 The chase begins as the throttles are eased forward for the 2020 Riviera Port Lincoln Tuna Classic and skippers set their sights on where they can land the best catch of the day.

By mid-Saturday, another 10 boats arrived at Roslyn Shoal and by Sunday the majority of boats were there.

One skipper who didn’t make it east and chose to try his luck at the well-known and usually-guaranteed Cabbage Patch fishing grounds was Mark Hand on his 52 Flybridge Aussie Battler.

“It was a very social weekend, but not many tuna caught for us,” Mr Hand said. “We had a fantastic time anyway.”

Hailing from all over South Australia and mainly the Riverland, Mr Hand’s crew rarely get a chance to go sea fishing. “It was a great opportunity to enjoy the social company on the back of the boat and then fish for squid at night,” he said.

They also enjoyed socialising off the boat and in the wide-open spaces provided on the beach at Engine Point. With a two-kilometre stretch of beach, there was plenty of room to celebrate the trophy presentation.

“Both Saturday night at Memory Cove and Sunday at Engine Point were extremely well catered for by [event organisers] Russell Bianco and Gabi Gabbana. There was a lot of fellowship over the weekend and it was just a magnificent event.”

The Riviera Port Lincoln Tuna Classic is a not-for-profit organisation. It donates 10 per cent of the total funds of the fiercely contested Calcutta to keep the voluntary radio operations functioning.

As its founding sponsor, Riviera enjoys a longstanding relationship with the Tuna Classic.

“We’re also especially delighted that the Classic encourages the whole family to participate in what has become a great and growing annual tournament on the Australian fishing calendar.”