After months of simulations and trials on a smaller-scale model while the full-sized model was being built, the Luna Rossa Prada Pirelli Team revealed their new, totally black, AC75.

The official ceremony took place at their home base in Cagliari, Sardinia. Following a blessing from His Excellency Monsignor Arrigo Miglio, Archbishop of Cagliari, Miuccia Prada, standing alongside her husband Patrizio Bertelli (President of the Luna Rossa Prada Pirelli Team),

Agostino Randazzo (President of Circolo della Vela Sicilia) and Marco Tronchetti Provera (CEO of Pirelli, the co-title sponsor of the Luna Rossa team and technological development partner), christened the boat by breaking a bottle of Ferrari Maximum Blanc de Blancs over her bow, marking the launch.

This innovative flying monohull will be sailed by the Luna Rossa Prada Pirelli Team in the Prada Cup, the America’s Cup Challengers’ Selection Series, followed by the final match of the 36th America’s Cup presented by Prada, scheduled to take place in Auckland, New Zealand from January to March 2021.

At the end of the ceremony, the Italian Prime Minister Giuseppe Conte took time out from an official trip to Cagliari to visit the Luna Rossa Prada Pirelli headquarters and the new yacht, and to talk to the crew and team members. 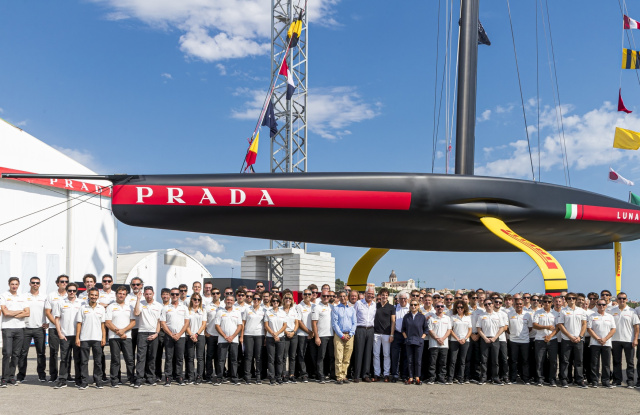 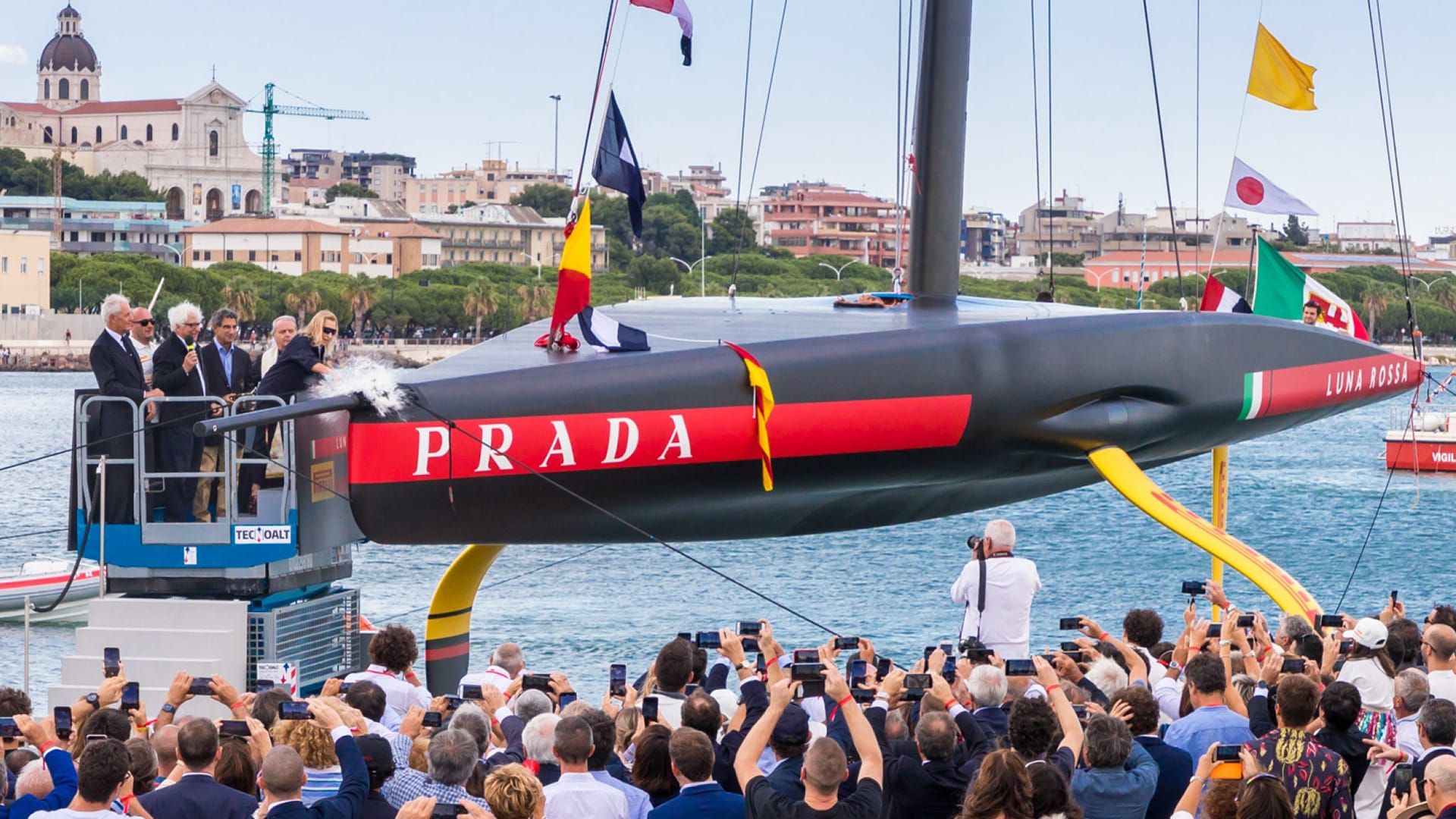 Patrizio Bertelli, President of the Luna Rossa Prada Pirelli team, said: “This is our sixth America’s Cup challenge, but launch day is as exciting as ever: it is the magical moment that brings together many months of work and dedication and the anticipation of finally seeing on the water what was until now only a design”.

“This time, the revolutionary and innovative way the entire monohull concept has been reinterpreted heightens expectations still further.”

The AC75 Luna Rossa, built by the Persico Marine boatyard, involved over 90 people in her construction, including 37 team designers, and took almost two years to build, for a total of 78,000 work hours.

7,000-square-metres of carbon fibre and 400-square-metres of aluminium honeycomb were used to create the hull. The two innovative carbon-fibre ‘foil arms’, weighing 500 kilograms each, have been designed to support a maximum load of 27 tonnes.

Another innovative feature of the AC75 is the ‘soft wing’ rig, with two sails hoisted in parallel and in-built systems to control the sail shape. This provides the efficiency of a hard wing combined with ease of use and handling akin to a traditional sail. 20,000 kilometres of carbon fibre thread was used to create the mainsail, in addition to 5,000 kilometres for each jib and 12,000 kilometres for each ‘code zero’, used to sail downwind in light breeze.

The AC75 Class represents a return to the monohull but with a revolutionary new interpretation, featuring pioneering technology that opens up a new approach to yacht design.

The first series of preliminary regattas of the 36th America’s Cup presented by Prada, the America’s Cup World Series (ACWS), will take place in Cagliari from 23 to 26 April 2020.

Max Sirena, skipper and Team Director of the Luna Rossa Prada Pirelli team, said: “We can’t wait to get acquainted with the AC75, a boat who will sail almost entirely in foiling mode: the hull will barely touch the water, allowing us to reach very high speeds”.

“A lot of effort has gone into reducing the transition time between the phase where the hull is fully in the water and the flying phase; it is a difficult balance to achieve, and we will continue to work on it during the development stage. I would like to thank the entire team, and the shore team and design team in particular, who have worked tirelessly on the project for months.”

Marco Tronchetti Provera, Pirelli Executive Vice Chairman & CEO Pirelli added: “Luna Rossa is today a reality – very beautiful and technologically cutting edge. It is born of passion, the pleasure of the challenge and pride of representing our Country in the world’s most prestigious sailing contest.

“Here, as in Formula 1, tradition and history merge with advanced research and continuous innovation. This is the combination that has been at the heart of Pirelli’s entrepreneurial culture for almost 150 years. We take on this new sporting challenge with enthusiasm and also support the team with our knowhow in the materials’ field. We are proud to be taking part in this challenge.”

Agostino Randazzo, President of Circolo della Vela Sicilia said: “I am thrilled to see the Circolo della Vela Sicilia burgee on such an innovative and high-tech boat, who will represent Italy in the 36th America’s Cup presented by Prada. The launch of the new Luna Rossa is a key moment in this challenge, which will undoubtedly reinvigorate the Italians’ love of sailing.”