Award-winning wildlife and underwater cinematographer, Tom Campbell and his scientist and filmmaker partner, Beth Davidow have realised their dream of owning a Maritimo motor yacht.

Tom and Beth travel the world capturing spectacular footage and images for a variety of clients and media.  Their next big adventure all started with a clipping on Tom’s bathroom mirror.

The couple, who live in Prescott Arizona and have a second home in New Zealand, have fulfilled a life-long dream by purchasing a luxury Maritimo motoryacht, an image of which has been on Tom’s mirror for several years.

The couple who produce wildlife and nature documentaries for media outlets such as the BBC, National Geographic and The Discovery Channel, along with a wide variety of private clients, plan to spend the next stage of their adventurous lives travelling to exotic locations in their M51 Maritimo motor yacht and filming everything from giant manta rays and blue whales, to great white sharks and other marine wildlife. 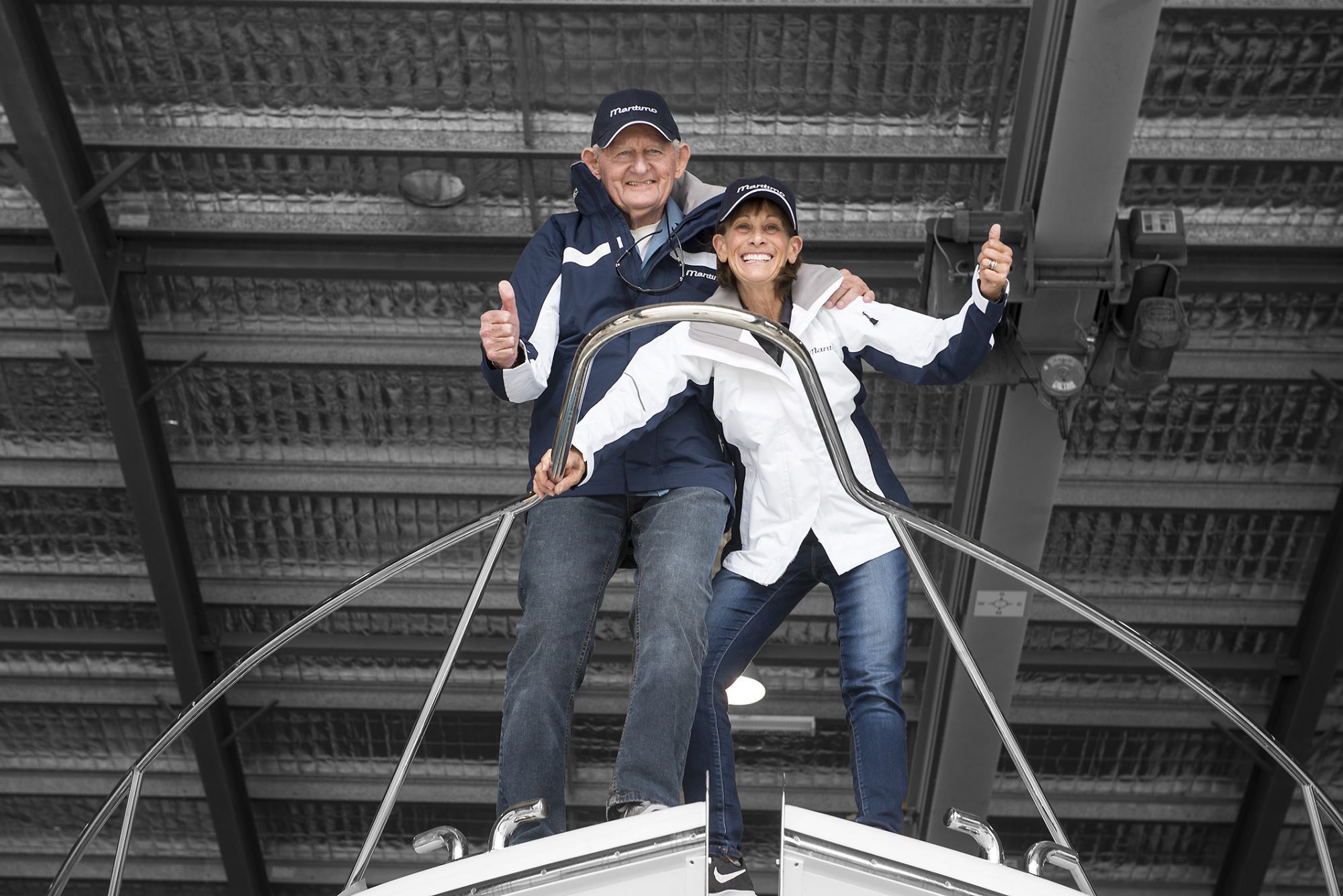 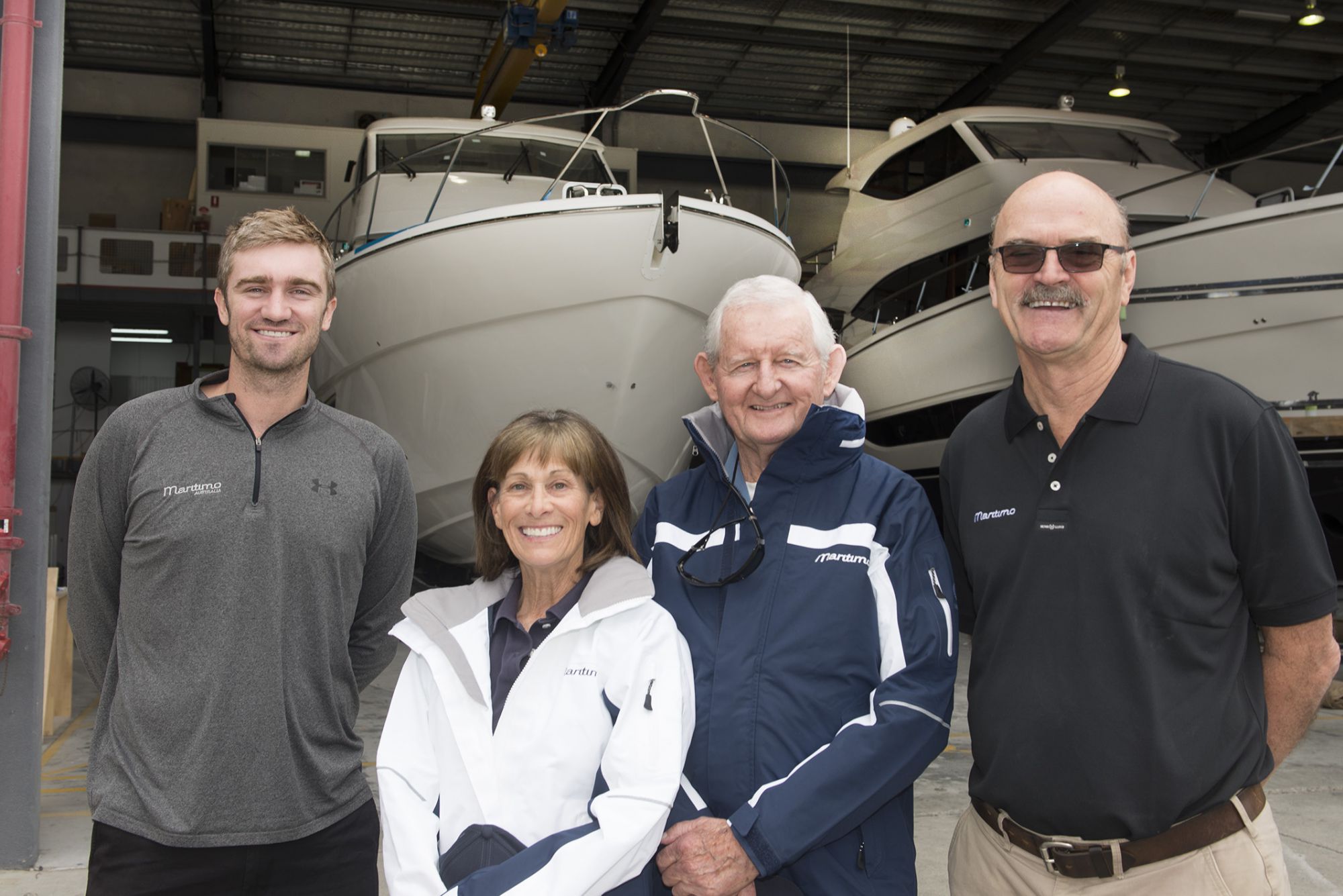 Tom and Beth with Maritimo lead designer, Tom Barry-Cotter and Operations Manager Phil Candler at the factory in front of their yacht 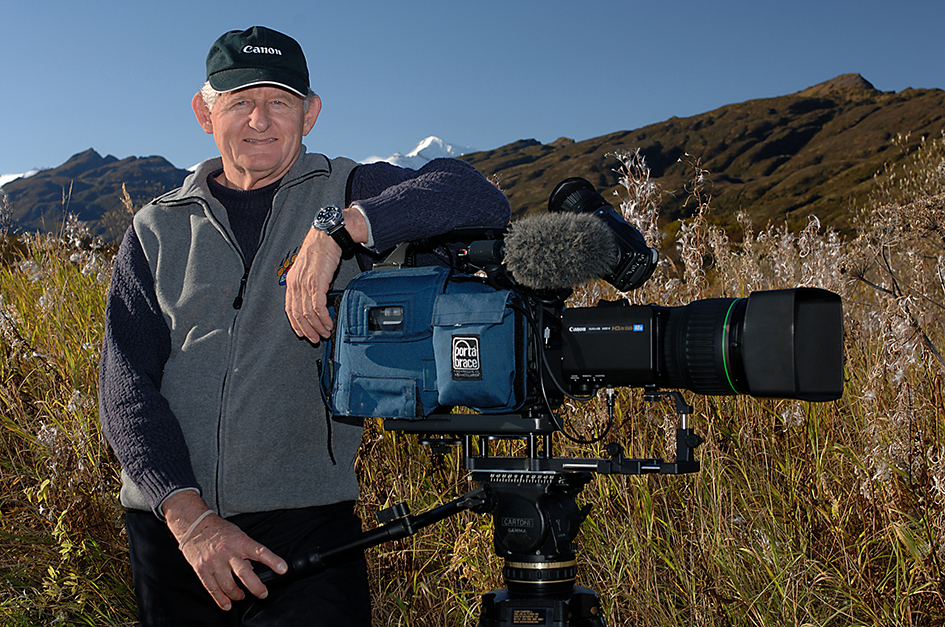 Tom on a shoot 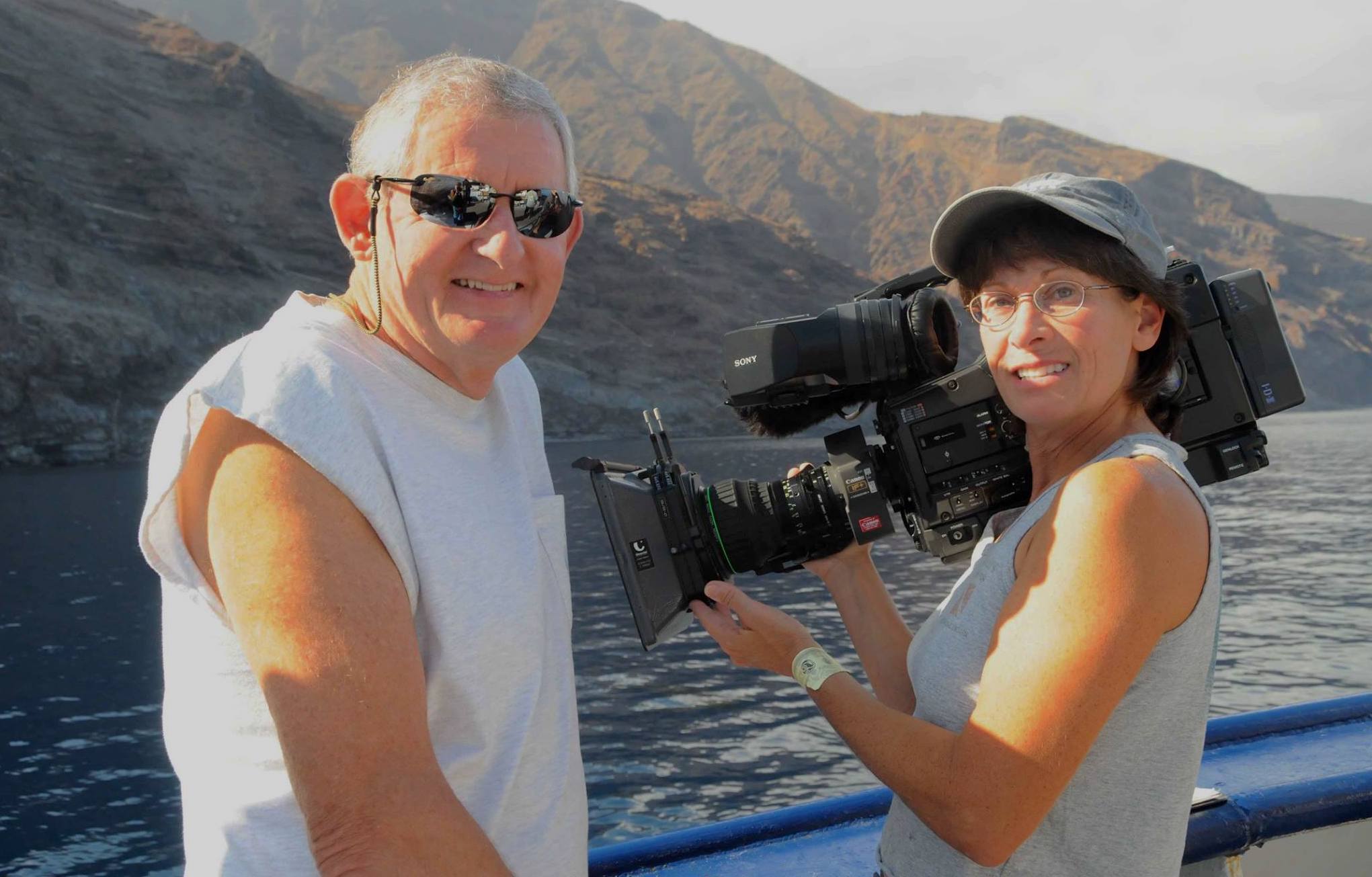 Tom and Beth in Guadelupe

“When I want something and have a plan to get it, I put a picture of it on the mirror to use as motivation,” said the distinguished cameraman and diver.

“I did it when we wanted a Tesla car, which we’ve now owned for four years, and then again when we wanted the M51 motor yacht. And now we have achieved that goal.”

In the early 1990s, Tom was diving with white sharks before cages were required. He’s logged hundreds of hours diving with sharks around the world. He was the first cinematographer to take large format High Definition cameras underwater.

Tom has been a diver for 60 years and spent six years as a combat diver in the US Marine Corps Special Forces 1st Force Recon Company. He served in the Vietnam War in 1964-65 working in highly-classified operations orchestrated by the CIA. Combat divers frequently deploy from submerged submarines then swim a few miles to shore to complete their objectives.

His military career was followed by 22 years working for the California Highway Patrol, a top law enforcement agency in California. A decorated officer, Tom spent his free time as an avid underwater photographer & dive instructor. When his sales of underwater images matched his CHP income, he chose to pursue photography fulltime. 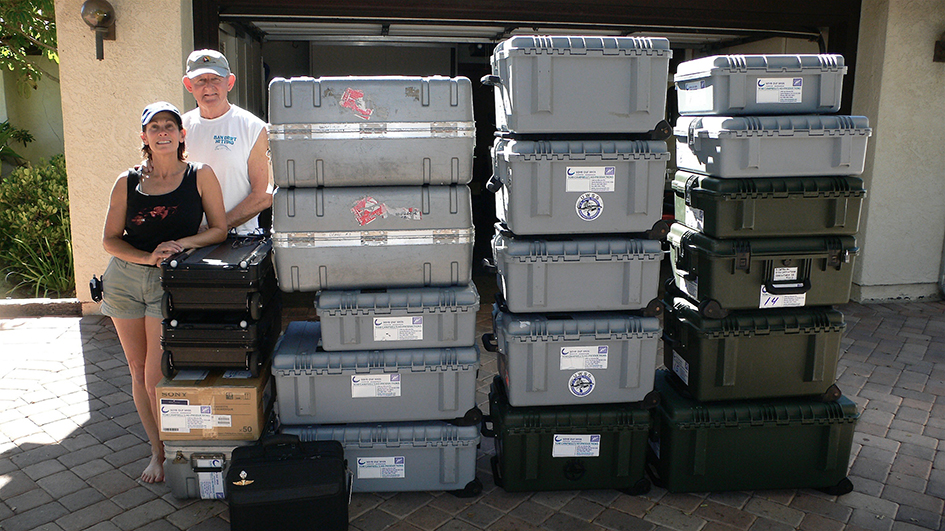 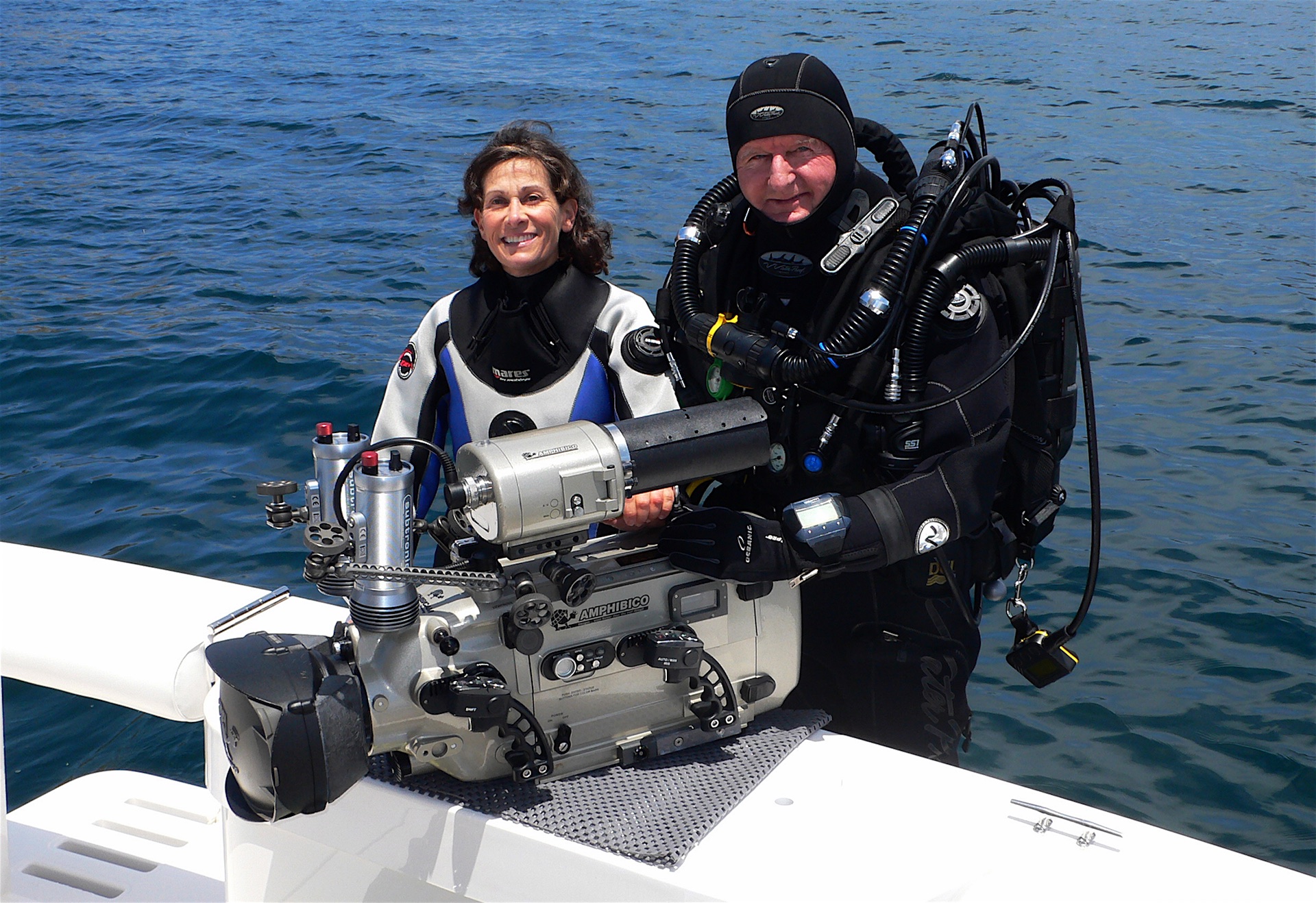 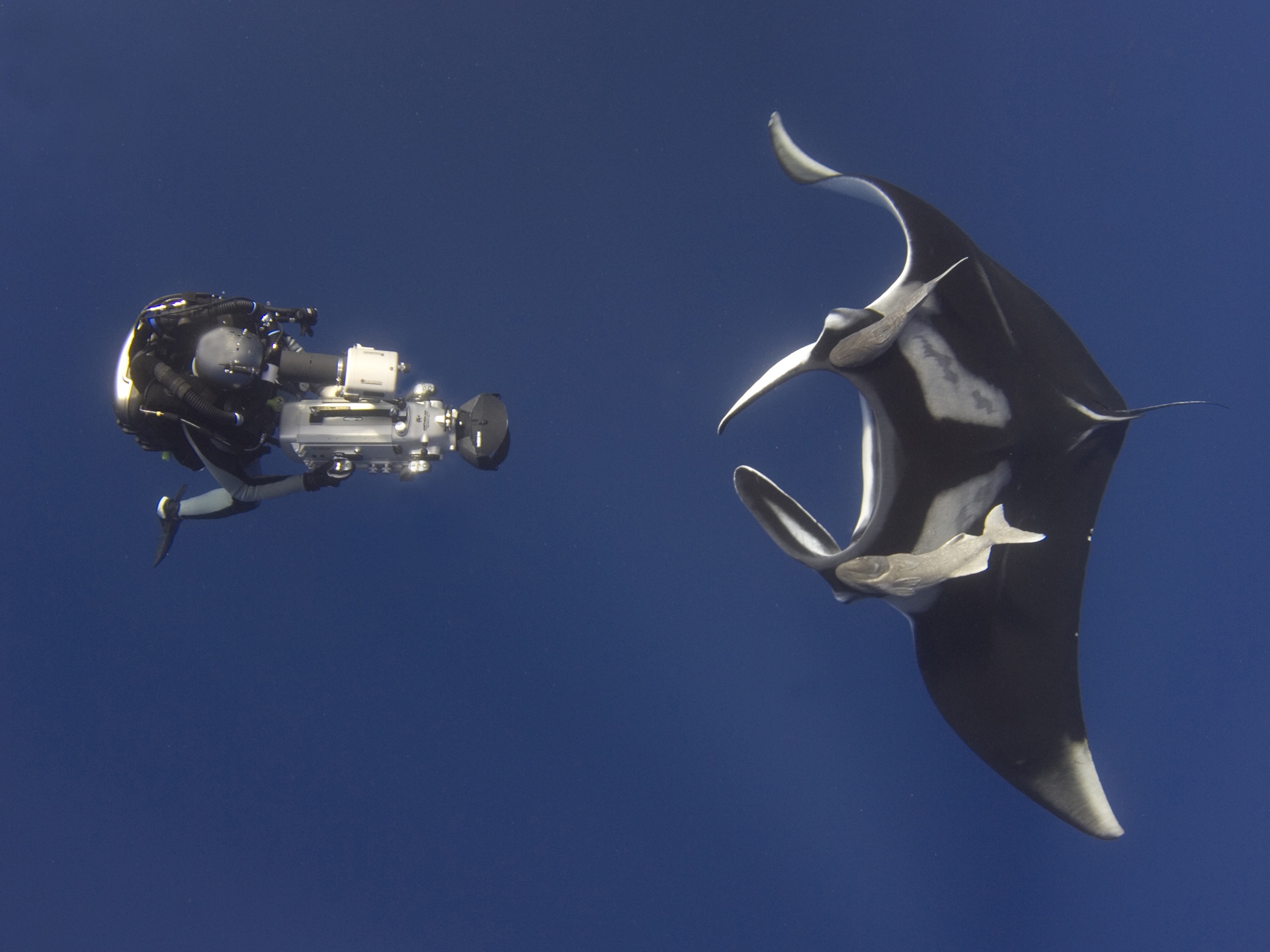 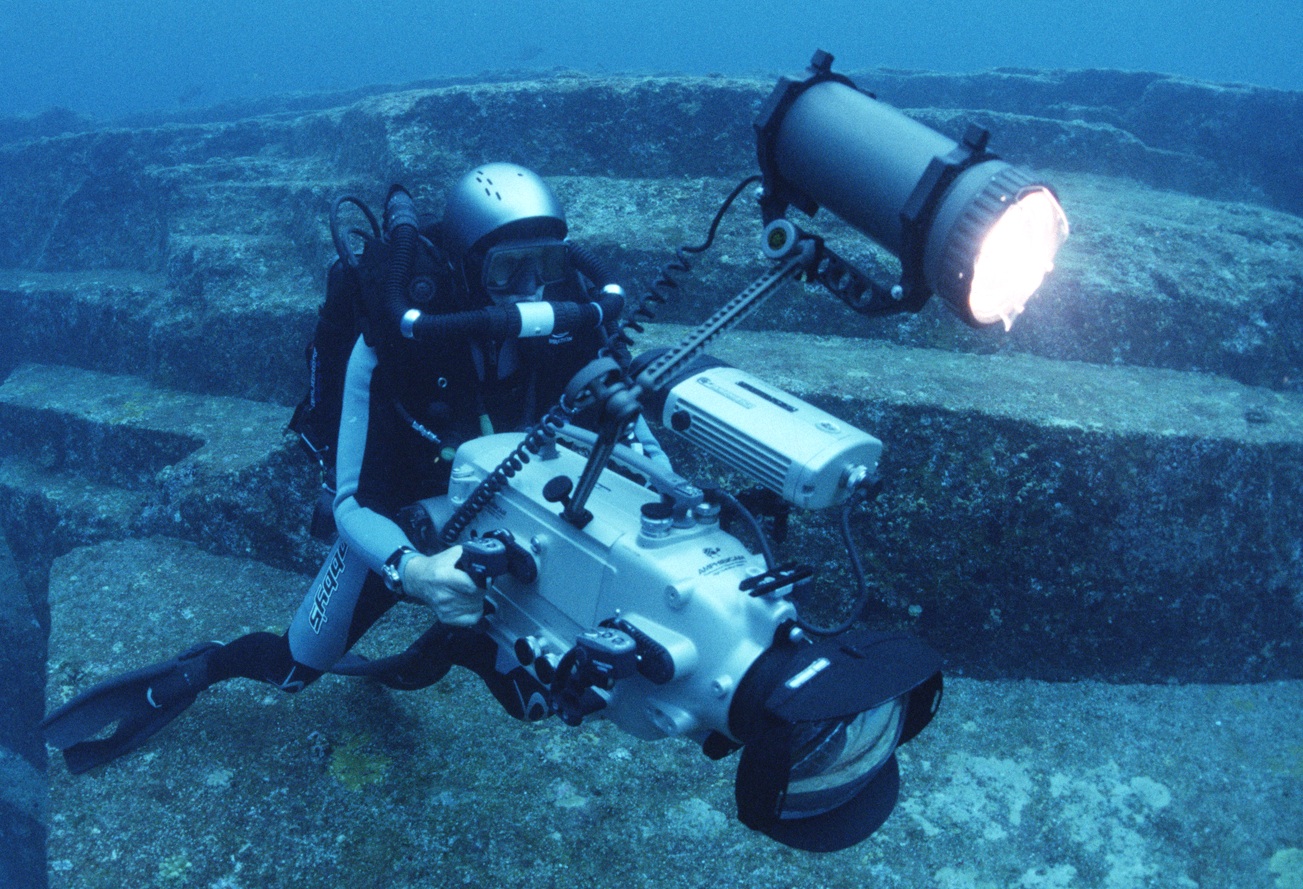 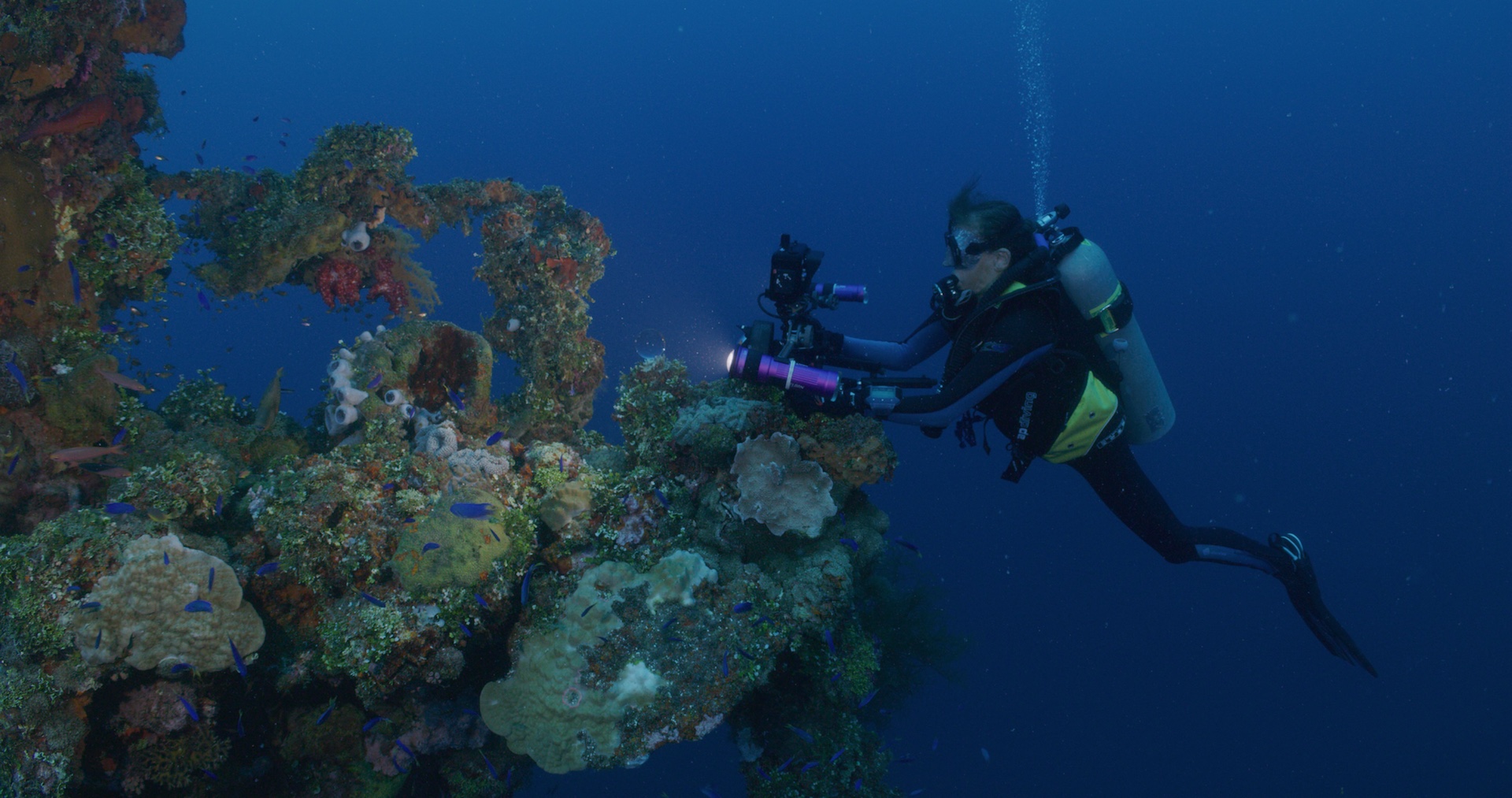 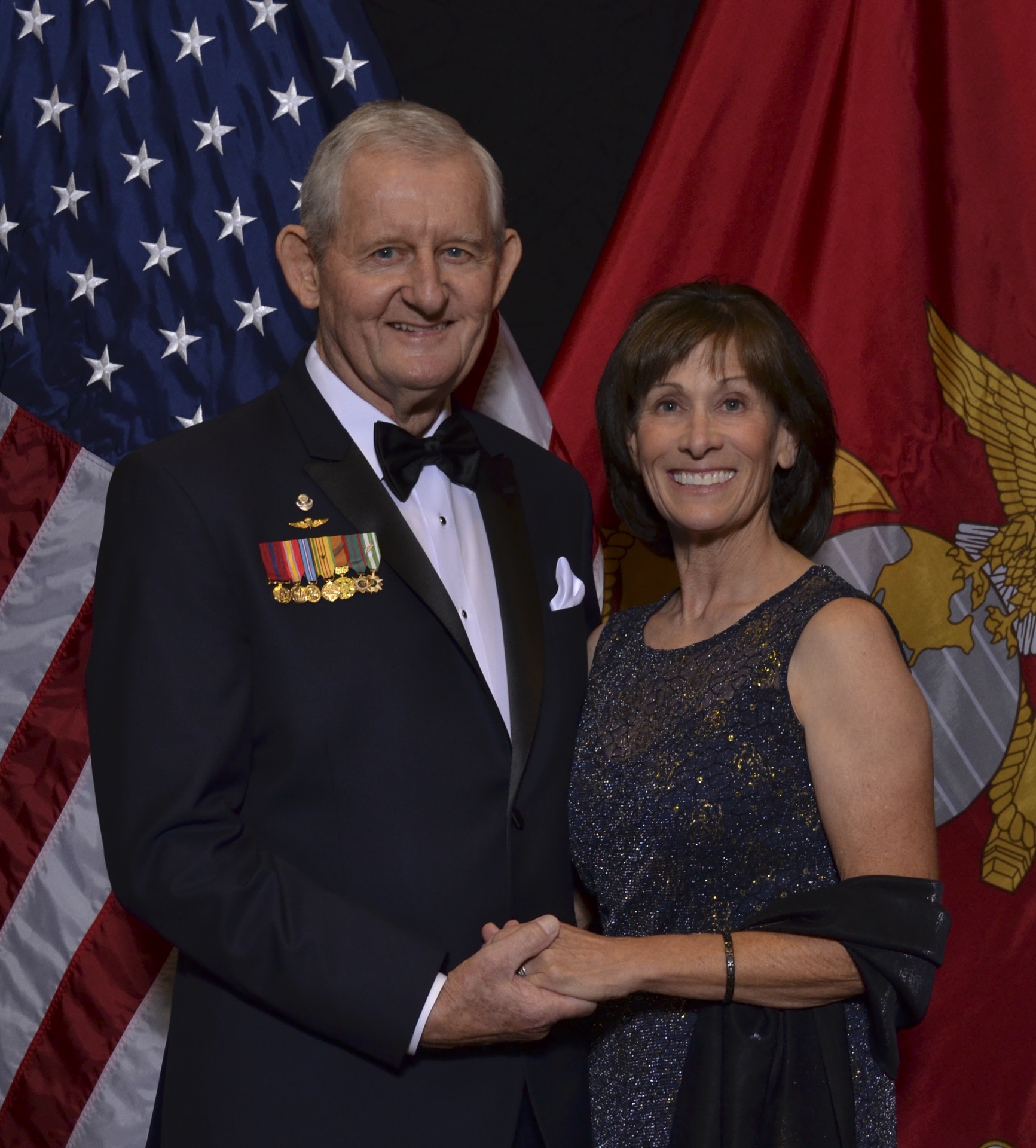 Beth turned her passion for wildlife studies, nature photography, and writing into a career after obtaining a master’s degree in natural sciences. As a naturalist lecturer in National Parks and aboard expedition ships, she traveled from the Arctic to the Antarctic adventuring and filming wildlife from polar bears to penguins.

At least once a year now, she heads out (often for weeks at a time in her truck and camper) to film wildlife and wild places through the Rocky Mountains, up to Alaska, or into the Arctic.

Tom Campbell’s Productions has a worldwide reputation. Tom has received numerous awards for photography and cinematography, including the prestigious BBC Photographer of the Year award. Together, Beth and Tom have garnered awards for their nature productions. “We’ve dedicated our lives to educating people about nature, both on land and underwater,” said Beth.

“We’re fortunate to live a fascinating life and are now at the stage where we are financially able to do what we want to do and that is spend time in nature and on the ocean in our own boat while sharing our adventures and experiences through blogs, films, and articles,” he said.

Together they travel to at least one dive destination a year, such as Truk Lagoon in Micronesia, Papua New Guinea, Komodo, or elsewhere. Soon they are off to film sperm whales in the Caribbean and manatees in Florida.

“We have wanted to film and dive off our own liveaboard boat for many years,” said Tom,  “but there has always been the next big project or we have been commissioned to shoot something for someone so never got the opportunity,” said Tom.

“Now we have the time and opportunity, which is very exciting. Beth and I want to demonstrate to people that if we can do this on our new boat than others can to.

“We want to show people that if you really want to do something you can and you don’t need to be a multi millionaire to achieve a goal like ours. You just need to have a dream that becomes a goal for which you make an action plan that results in the dream becoming a reality.”

Tom and Beth previously owned two boats together, including a 35’ CABO sports fisher, and they conducted international research before settling on their M51, which is boat number five for Tom.

“We went to a number of boat shows and looked at a wide variety of brands,” he said. “The vessel had to meet many requirements for us, including long range cruising capacity, seaworthiness, reliability and workmanship, space, storage and ease of maintenance. The Maritimo range was the perfect choice.”

Because they plan to live fulltime on their Maritimo for up to five years, the luxurious comfort was also important.

“We also wanted an enclosed bridge on a vessel that could take us a long way to some very remote locations for our diving and filming,” he said.

“We carry a lot of gear to film in both warm and coldwater environments including wet and dry suits, scuba tanks, an air compressor, and my closed-circuit rebreather. The large lazarette below the cockpit deck on the M51 has room for all that and more. Additionally, we use large 8K digital cameras with special underwater housings and lighting systems, which take up a lot of room.

“Maritimo’s Bill King was most helpful in trying to find us a used 51, which was our initial choice. He located a perfect one for us, but we found that used Maritimos are very quick to move, and we just missed out on that boat.

“Connecting with Maritimo America’s President Dave Northrop was fortuitous and he convinced us a new 51 was possible.”

In February 2020, Beth and Tom will take delivery of their M51 and will then head to the Sea of Cortez, stopping to dive and film at a number of offshore islands along the way.

One of their favorite locations is San Benedicto Island, a volcanic outcrop some 225 nautical miles out to sea southwest of Cabo San Lucas, Mexico.

After a year in Mexico their travels will only be restricted by their imaginations and the next stop planned at this stage will be Alaska’s Inside Passage.

The couple say their commitment to nature, the ocean, and education has been a lifelong passion and as they move into this next stage of their lives that will continue and also offer up more opportunities for them to educate people about the importance of protecting the last frontier on our planet.

“Now is our time for us to share an adventure doing what we love together,” Tom said. “We also want to prove to people that they can do it, too.”

“My parents never owned a new car or a house of their own.  In their later lives we looked after them so none of this has come to us easily through an inheritance, for instance. If you set a goal and work towards it you will succeed. It gets back to the image on my mirror of the M51. That reminded me every day what I was working towards.”

Because Tom and Beth have lived in New Zealand for many years, they selected the Maori name Tangaroa, which means Guardian Of The Sea, for their M51. Tangaroa will leave the Maritimo shipyard in Australia at the end of December for delivery in Newport Beach, CA, where it will be outfitted with specialized equipment for their production work. Tom and Beth will take delivery in February and head south to Mexico.

“We could not be happier with our boat, our experience with Maritimo and the people with whom we have been dealing,” said Tom on a visit to the Maritimo Gold Coast manufacturing plant.

“We’re excited to see what the next phase in our lives hold, living aboard our M51.”