Columbus Yachts have announced the launch of their range, Atlantique.

Columbus Yachts, a brand under Palumbo Superyachts, have officially announced the launch of a new line devoted to elegance and versatility.

Named ‘Atlantique’, this series will see three models under its umbrella – the first of which being the 43 metre Atlantique 43m. A model that reflects designer Hot Lab’s philosophy of style, function and enjoyment – or, as Columbus Yachts have defined it: Architecture for Voyagers.

Responsible for the large exterior and seamless interior design, Hot Lab has pushed the interaction of how these spaces interact with the marine environment to its peak.

For example, the hull silhouette is reminiscent of yachts from a bygone era, while the stern, which contains a large panoramic swimming pool, is only 50 centimetres above water – a feature complemented by the ‘sailboat-style’ stern.

Indoor, the main saloon is characterised by two relaxation areas: the first, at the further aft, is furnished with a large C-shaped sofa and a small sofa adjacent to the entrance while the second is designed like a cinema with a large sofa facing an 82-inch wall TV with the option of two sliding windows forward of the main saloon. 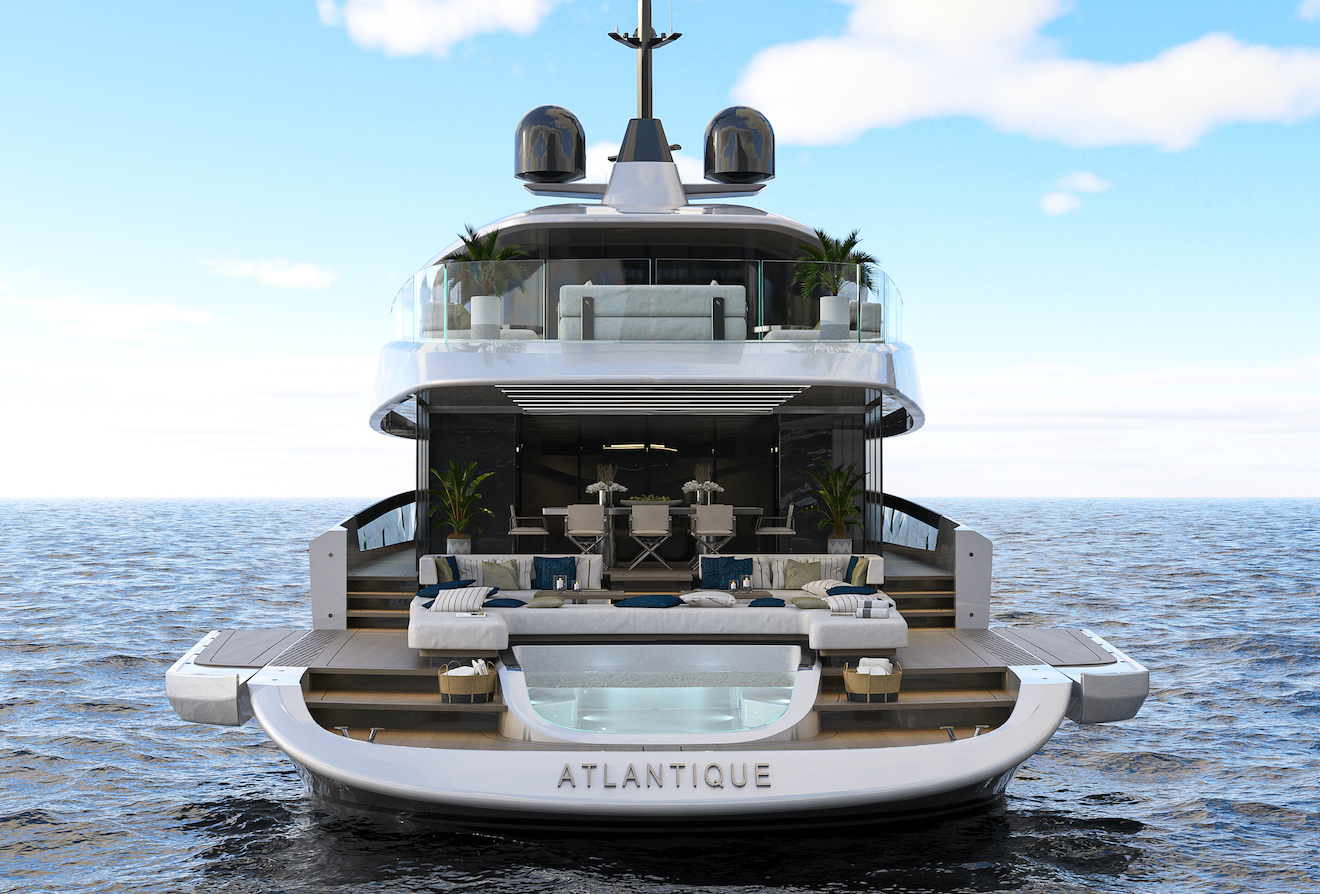 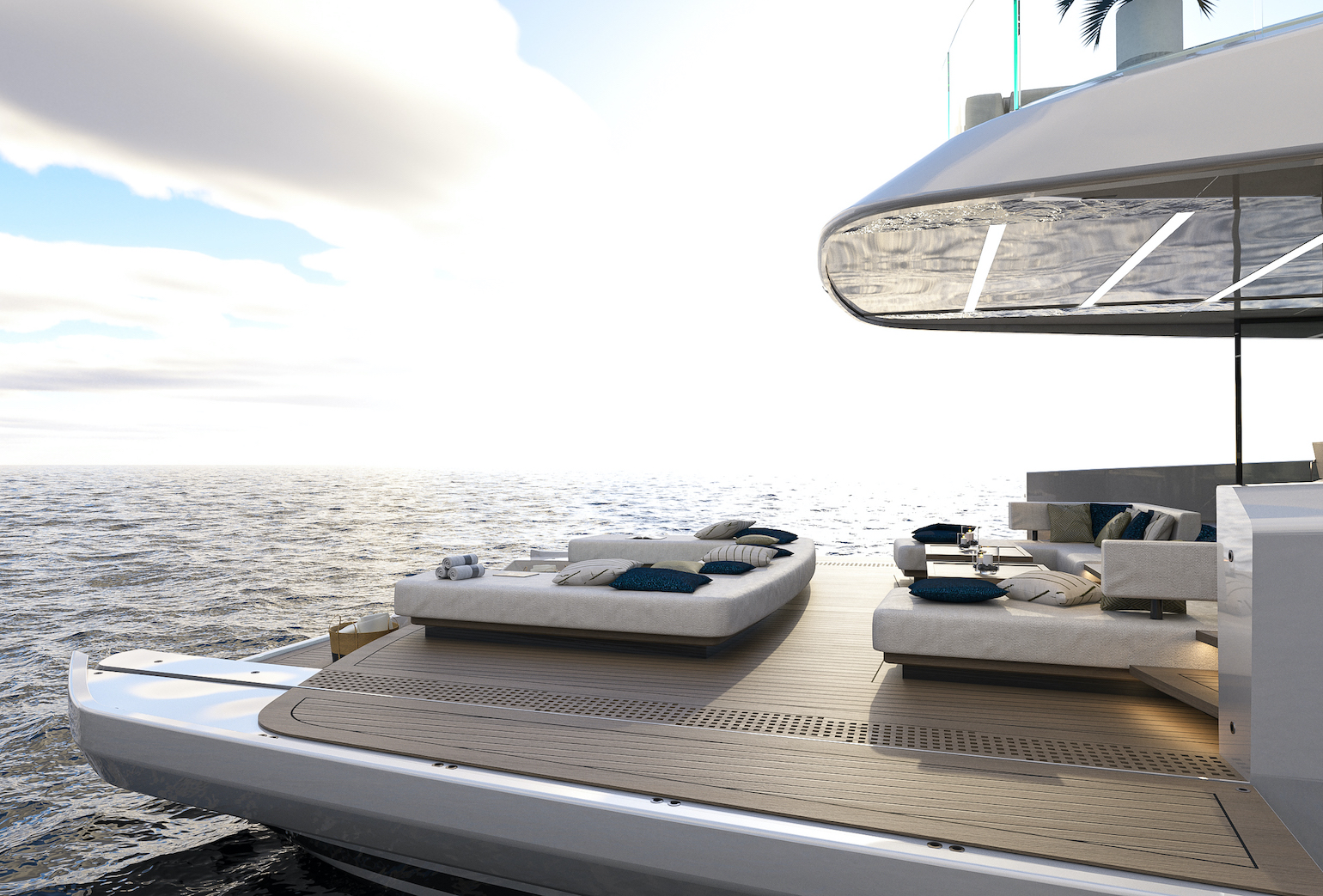 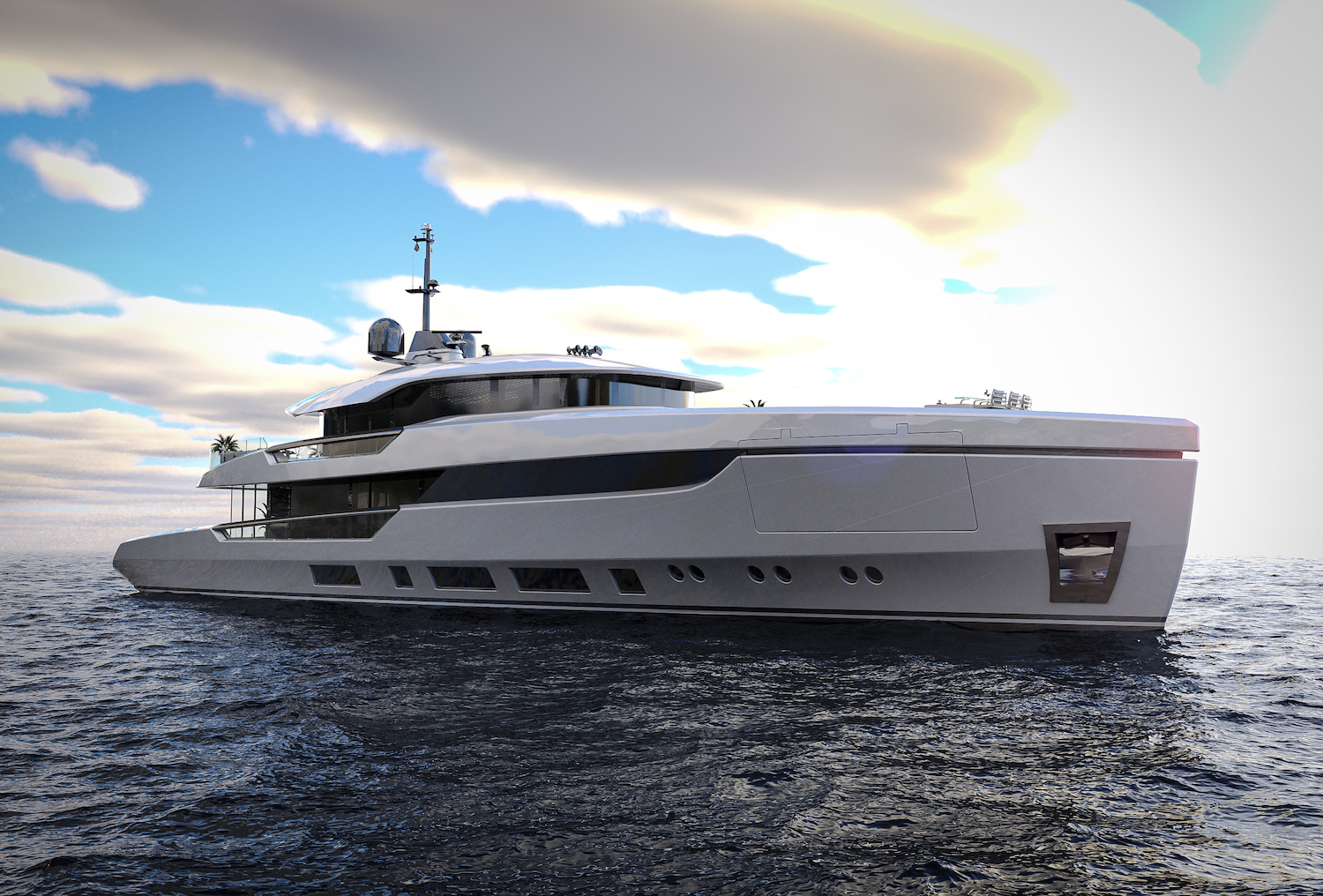 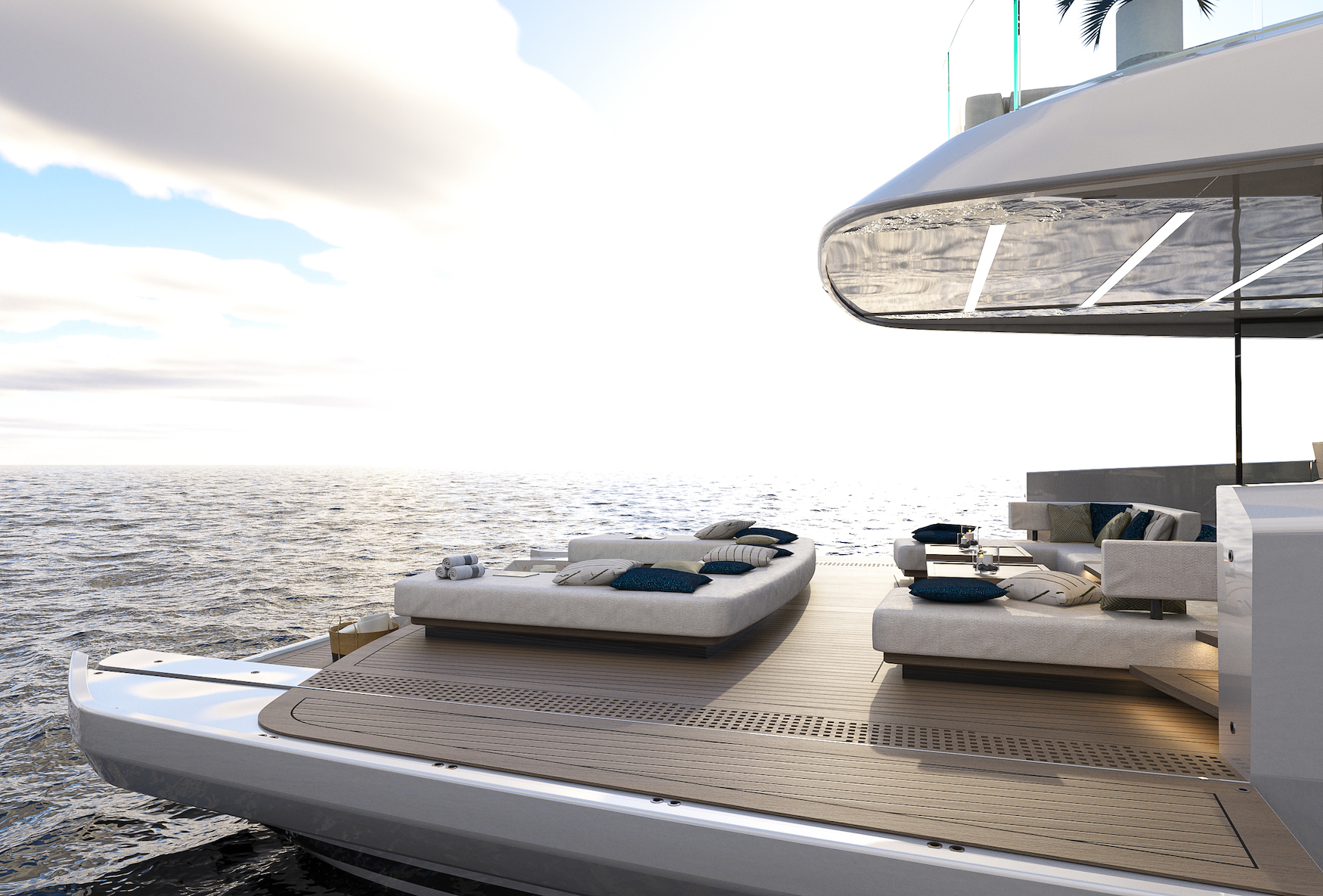 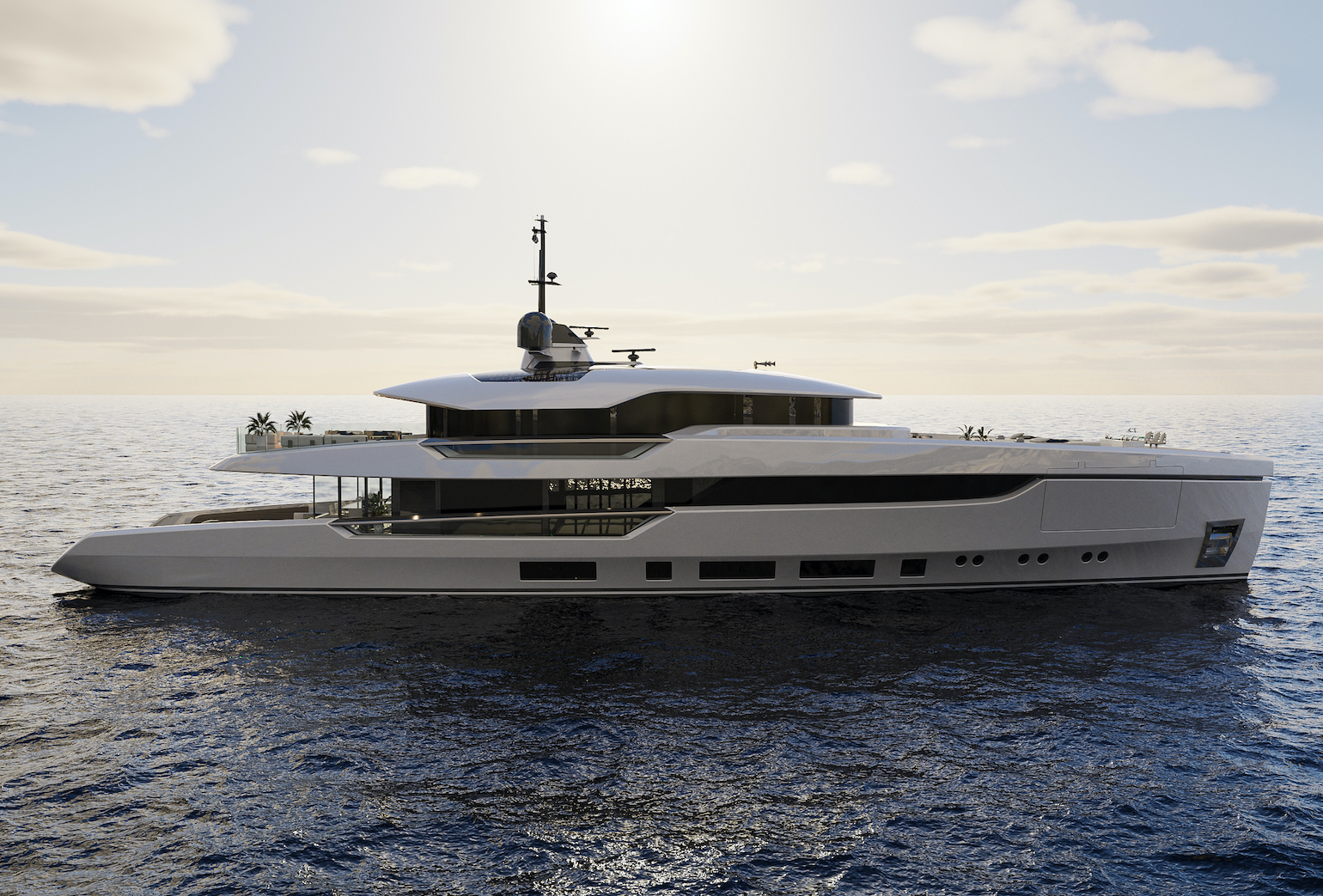 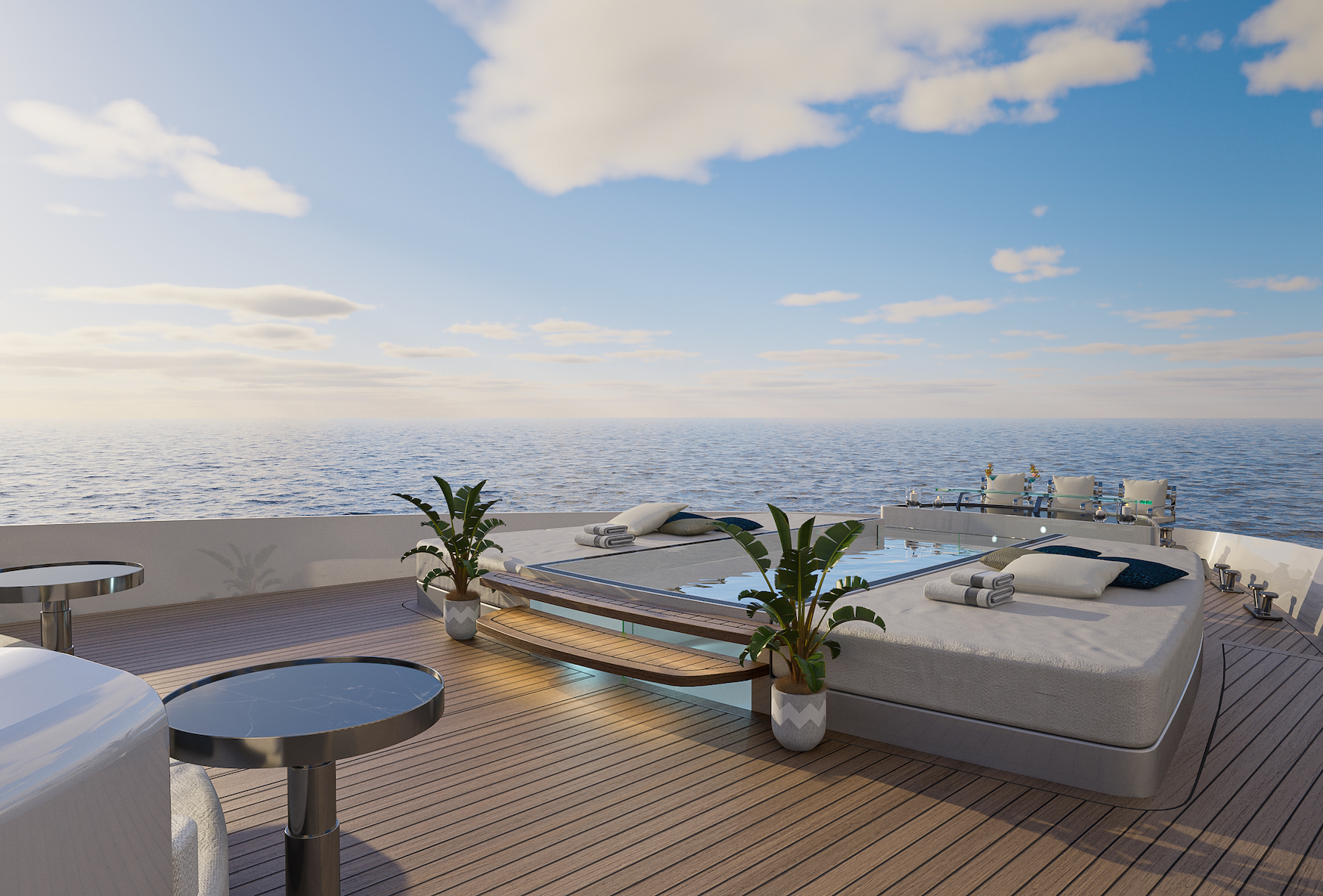 The rest of the main deck is divided into several areas including a stairwell, double exit lift and additional guest area that can be used as a small gym or library. The forward port area of the main deck is dedicated to the crew and houses a pantry, cold room, laundry and the main galley. The deck is completed by the captain’s cabin, including ensuite bathroom, and a second garage to house any rescue tenders or toys.

The interior also features a suite with a king size bed facing aft and is surrounded by floor-to-ceiling windows, enabling a 180-degree view to the horizon. The owner studio additionally includes a large dressing room with comfortable sea view vanity and the private bathroom with bathtub and shower complete.

Available in either a six-cabin layout with an almost private apartment on the aft or a sundeck version, the lower deck in both layouts houses five cabins with two VIP including side bathrooms, two twins and a full-beam VIP suite.

Forward of the lower deck is dedicated to the crew which features four double cabins, all with their own bathroom, and a dedicated staircase leading to the second crew area on the main deck.

The 5.5-metre tender garage is in the port side aft while the forward of the main deck has been arranged in order to house both the second tender and two waverunners.

Completing the wide ambit of features of the Atlantique 43m are its number of eco-friendly solutions including solar panels, water purifiers and low fuel consumption propulsion system. A decision that allows this ‘architecture for voyagers’ to ensure that voyage is fair to the planet.