Regan and Sandra Fleming took their 11-year-old son out of the classroom last year and into the school of South Pacific life on their Riviera 68 Sports Motor Yacht.

Regan and Sandra Fleming decided to journey across the Pacific. What ensued was the trip of a lifetime lasting almost six months aboard their Riviera 68 Sports Motor Yacht, Living the Life.

Perhaps the best way to describe Regan and Sandra Fleming’s journey through the Pacific is as a half-year fishing trip. Regan notes, “We’re mad fishermen. Sandra is the maddest of us all.”

Together with Joel’s school tutor Dan and his partner Krissi, the Flemings sailed in May last year from the Gold Coast to New Caledonia, through Vanuatu and Fiji. In five and a half months they clicked over 7,000 nautical miles, 553 engine hours and 1,600 generator hours.

“It’s a very aptly named boat,” says Regan. “Not to be confused with living the dream because, on this boat, life is better than a dream.”

In fact, it’s the Flemings’ third Riviera, having dipped their toes in the water first with a 51 Flybridge before graduating to a 56 Flybridge. 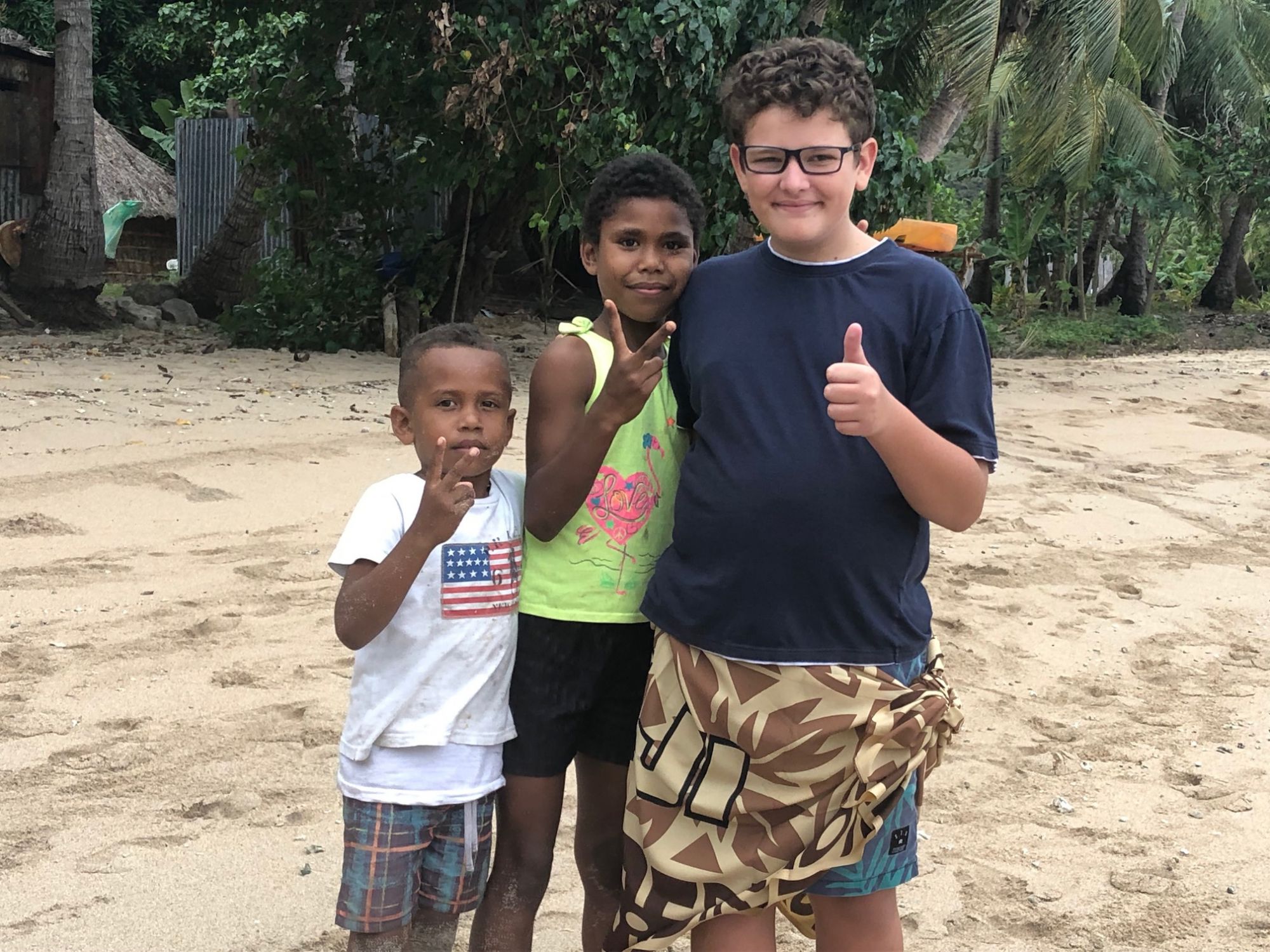 Fiji was the best of both worlds between remote village experiences and five star tourism. 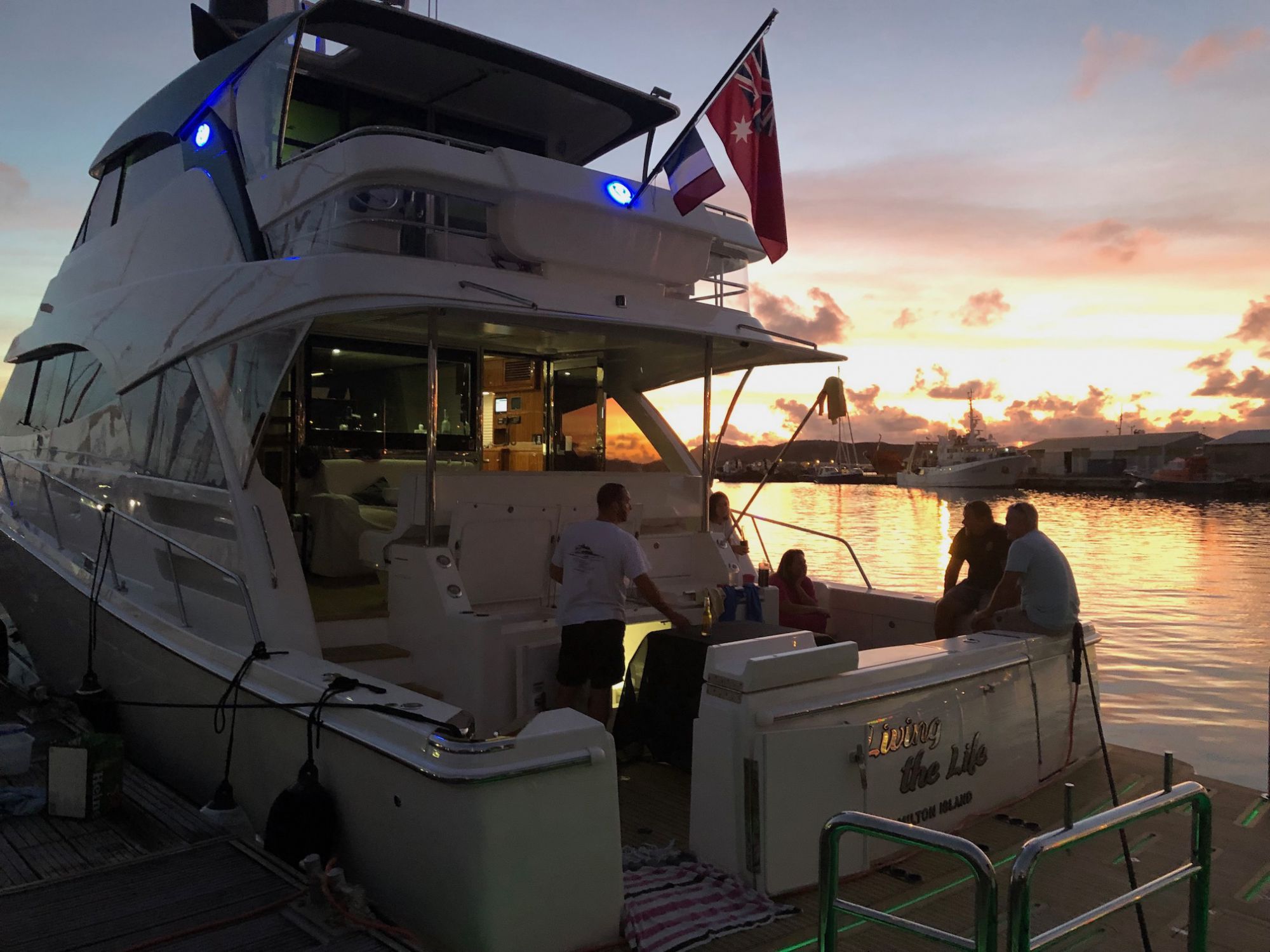 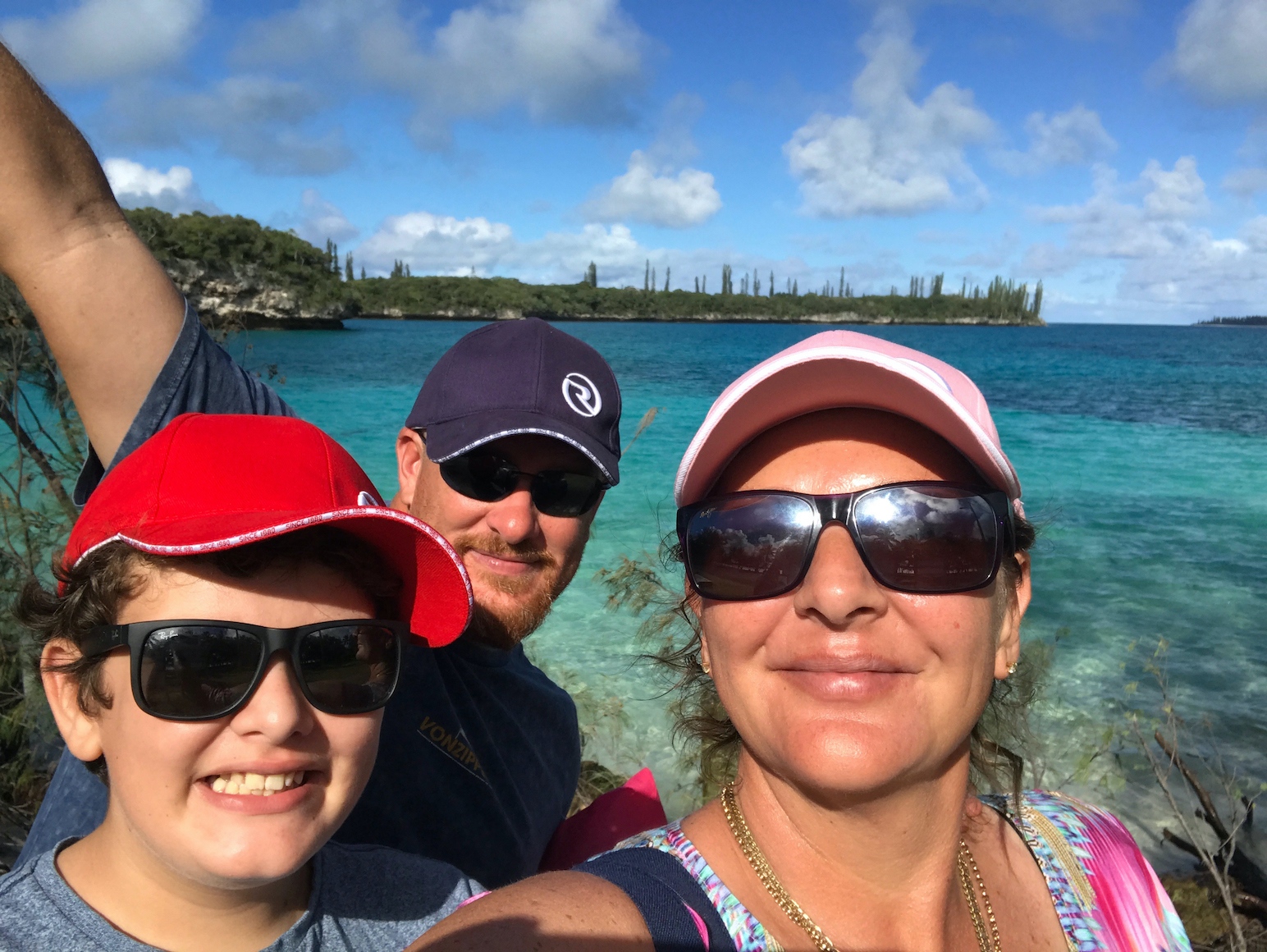 Time to connect as a family on their five and half month long adventure. 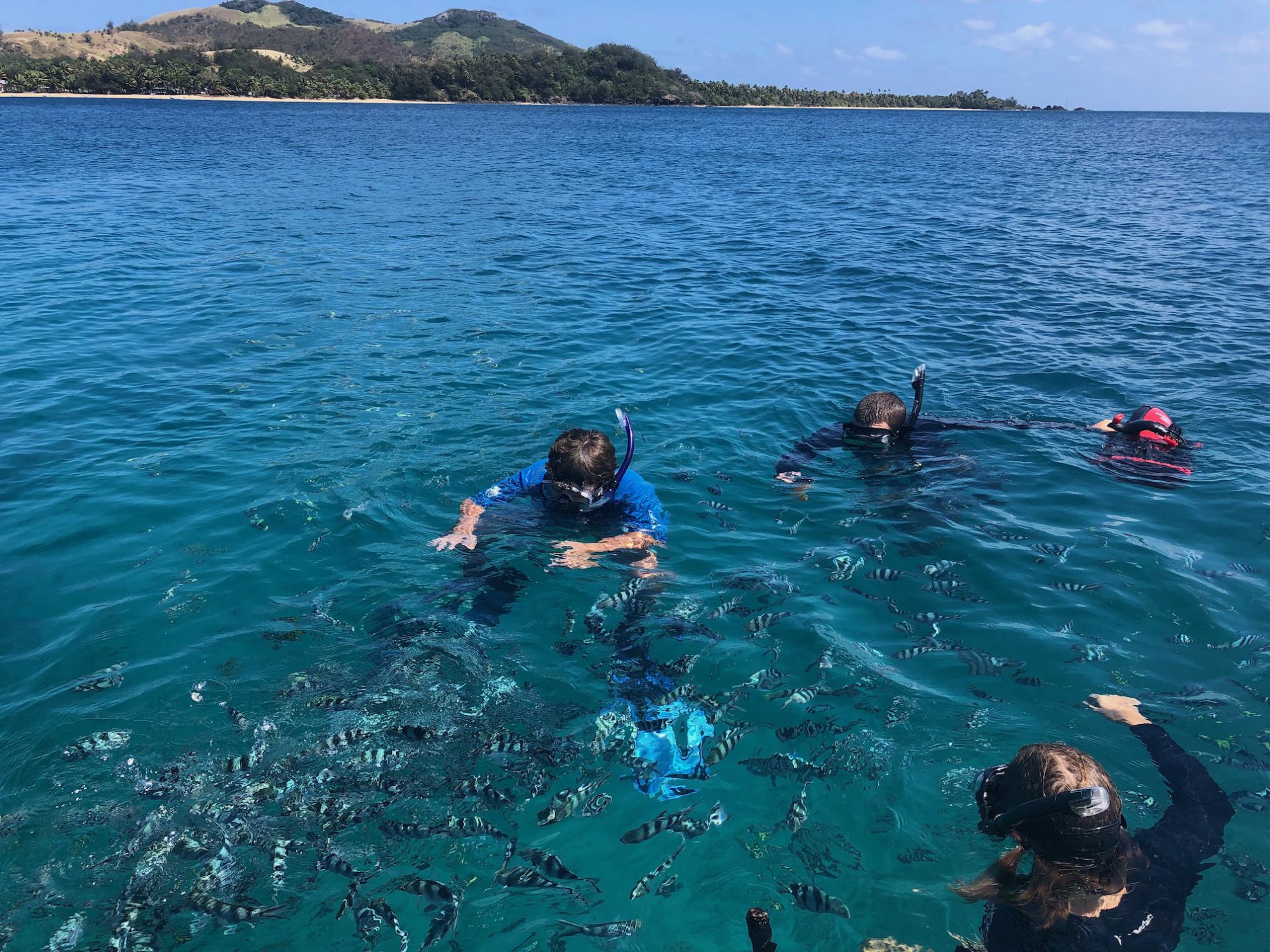 On Living the Life, the big blue was Joel's real life lesson book. 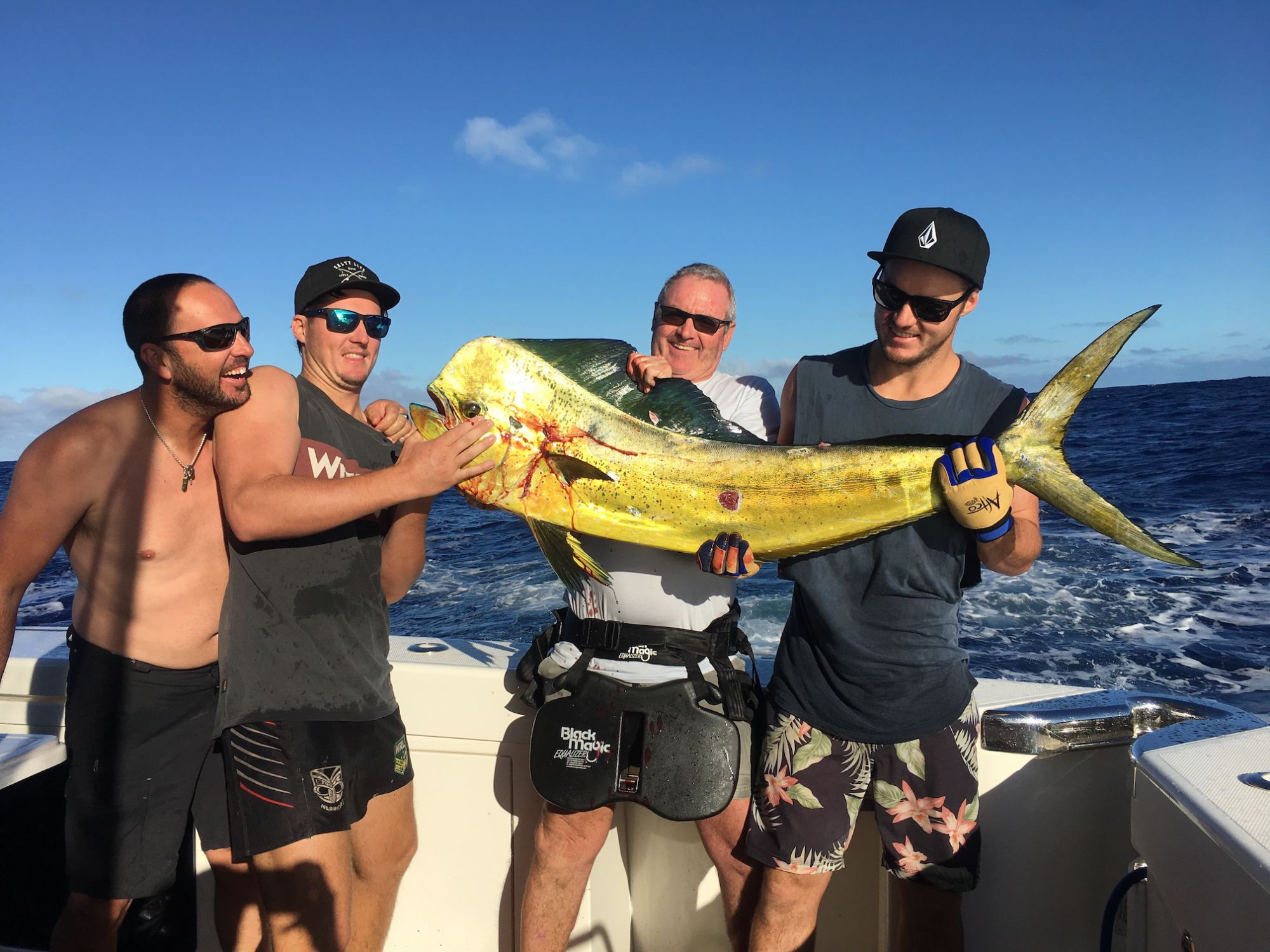 That'll be right, another mahi-mahi for the boys! A floating five star home away from home. 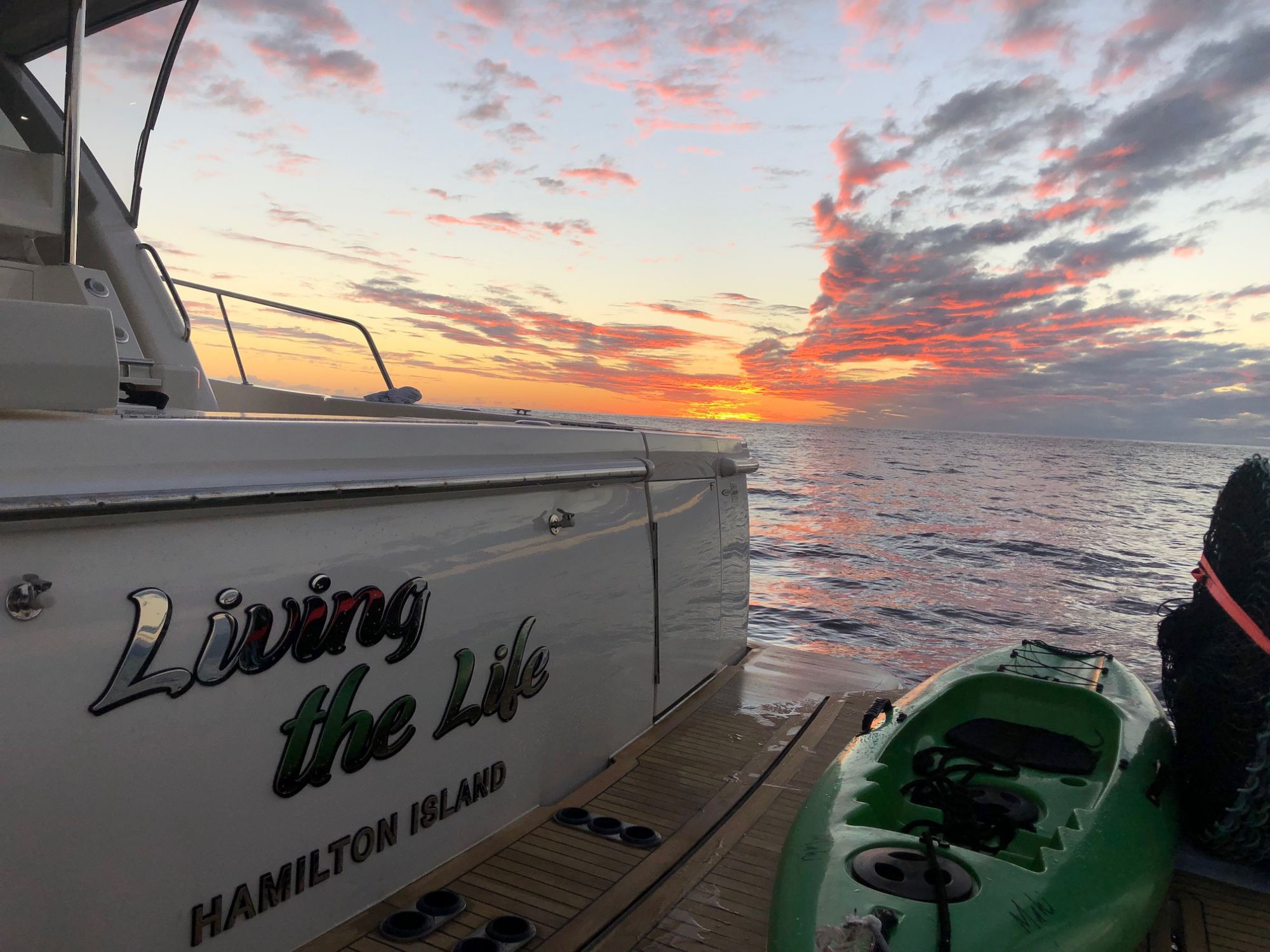 Because life is better than a dream.

For Sandra, the fishing gets better on each Riviera they purchase. “It’s just turned into a huge passion,” she says.

“There’s a lot more space on the 68, even with more people fishing it’s not as chaotic. And there’s room for the bigger fish! Plus, the downstairs day head is awesome because no-one has to go inside when they’re all grubby.”

But it was the tease of an extended Pacific voyage that called for a larger vessel, one with greater ocean-going capabilities.

Regan says, “With Riviera building boats with longer range travel in mind, and with this level of luxury, the 68 Sports Motor Yacht ticked all the boxes for us.”

The Riviera 68 (and 72 Sports Motor Yacht) boasts a hull designed in partnership with Dutch naval architects Mulder Design. These hulls are extremely capable at varying speeds and in a wide range of offshore conditions. On Living the Life, Regan opted for gyro stabilisation.

“First, we took the boat from the Gold Coast to Hamilton Island for a shakedown cruise. We did a fair bit of fishing in different sea conditions as well. The gyro stabiliser effectively helps eliminate any side-to-side roll so, in conjunction with the hull design, it’s a really comfortable ride.”

The real offshore test though was the 780-nautical-mile passage from the Gold Coast to Nouméa: “We knew the fuel figures for the boat, but in an open sea situation with winds and currents, it’s hard to predict. We were amazed at the fuel economy.”

Including running the generator 24 hours a day, fuel usage worked out at a little over five litres per nautical mile at a rate of 8.5 knots. “For a boat of this size, that’s exceptional. The passage took 92 hours, and we used a shade under half a tank; she performed above expectations.”

From Nouméa, Living the Life cruised south and dropped anchor in the gin-clear lagoon waters of the Isle of Pines – known as the closest island to paradise – for five weeks before heading to Vanuatu via the Loyalty Islands and Ouvea.

“We were shorthanded on that crossing. It was just Dan and myself over two days. Interestingly, we decided to fish during the passage. Luckily, the boat basically drives itself, and we managed to land two very nice mahi-mahi.”

They were also shorthanded in Port Vila, this time just Sandra and Regan were on board and, as might be imagined, one of them was fighting “a decent black marlin”.

Designed with docking – not fishing – in mind, the 68 Sports Motor Yacht features an EJS joystick located at the forward and aft helms and in the cockpit. The joystick’s location facilitates clear communication between the driver and the deckhand.

Destination: Across the Pacific on a Riviera 68 Sports Motor Yacht

“There are a few different systems on the market and, in my opinion, this is the best fingertip control. It’s designed for anyone to handle. While I reeled in the marlin, Sandra drove, reversing up on the fish using the joystick.”

North of Port Vila the Flemings arrived at the volcanic island of Ambrym, then the narrow strip of Pentecost Island where they missed the land-diving season by an inch, and from there to the island of Santo. Snorkelling at Million Dollar Point where the Americans dumped all their surplus army equipment at the end of World War II proved to be a remarkable history lesson for Joel.

“Joel experienced history firsthand – above and below the water. From an academic point of view, the boat schooling was fantastic, and he is now well ahead of where he needs to be. Dan had a curriculum prepared and a routine based on the weather!”

For Sandra, watching her son learn in the great outdoors was special. She says, “It’s been amazing to see Joel grow not only in his schoolwork but also in what Regan has been able to teach him about fishing, driving the tender, learning about the weather and water movements, on top of all the water sports.

He appreciates it now, but when he gets older, I think it’s going to be the highlight of his childhood.

While the saloon doubled as a classroom, the capaciousness of the 68 Sports Motor Yacht ensured room aplenty for everyone. Sandra says, “They could be studying in the saloon and we could be in the flybridge if we wanted airconditioning, or the flybridge deck, or on the foredeck or the mezzanine. There were plenty of areas we could go to. Our master stateroom was a beautiful space to take some time out in as well.”

With the five onboard, Regan says they could have had another five and not noticed. She says, “There’s so much liveable space. It’s very serviceable and easy to maintain, not to mention luxurious. It’s like turning up to your own personal five-star hotel on the water.

“The amount of storage space is second to none, especially with a utility cabin for a workbench and tools, and not an inch of space is wasted in the galley either. We loaded up with our favourite brands including 20 jars of Vegemite, tonnes of tinned tomatoes and UHT milk for months.”

Earlier this year, Joel returned to the classroom at Hamilton Island and, for now, Living the Life has remained in local waters. But with the knowledge the Flemings have gained from their Pacific adventure, Sandra admits that anything’s possible.

“Our first trip will always be the most memorable, with what we’ve accomplished together and everything we’ve learned, but yes, there’s definitely the potential for another trip of a lifetime. This is definitely not the last.”