Salt in the veins

Hylas Yachts’ new M49 was developed to meet the demands of prospective owners looking for a larger model, and offers more room in the aft lounge, an increased capacity to carry water toys such as kayaks and paddleboards, and enhanced stowage for the dinghy.

The M49 was built in collaboration with New Zealand yacht builder, Salthouse. The Salthouse family has a tradition dating back over 65 years designing and building motor yachts in the Southern Hemisphere.

Dean Salthouse designed the yacht for a demanding lifestyle, and the M49 has proven to be a fast and seagoing yacht, with a maximum speed of 31 knots.

“Firstly, it is very noticeable how stable the Hylas M49 is in terms of the beam to beam roll. As for athwartship stability, with the longer waterline, the M49 handles the seas. You cannot have enough of that,” Dean Salthouse said after sea trials.

“Second, in large head seas, the additional length and comparatively modest beam allow the waves to slide by without a lot of bow lift. And as the bow does not lift, it certainly does not slam. This makes the boat very comfortable and cuts back the head seas’ effect, making a 4′ wave seem like a 2′ wave.” 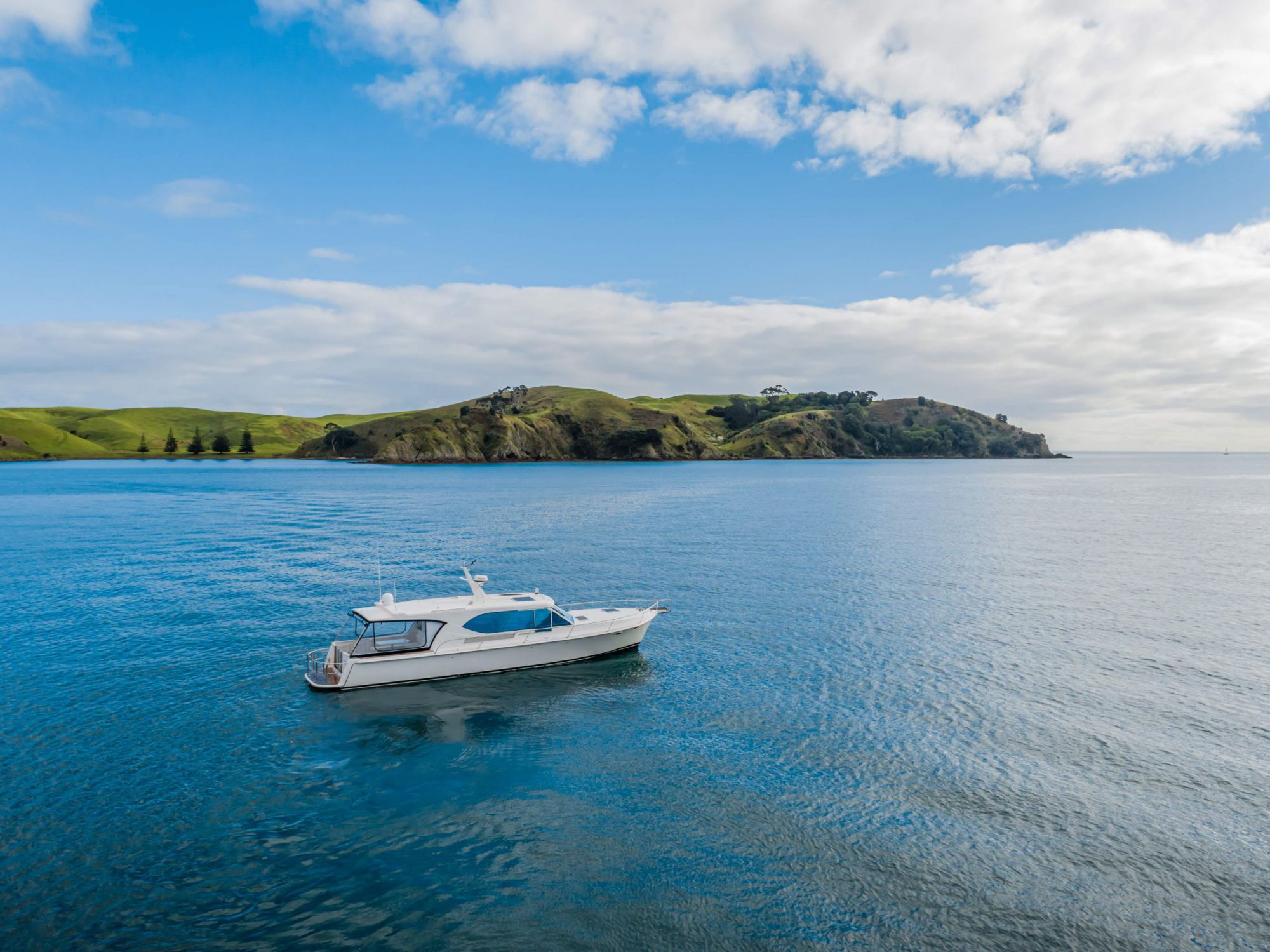 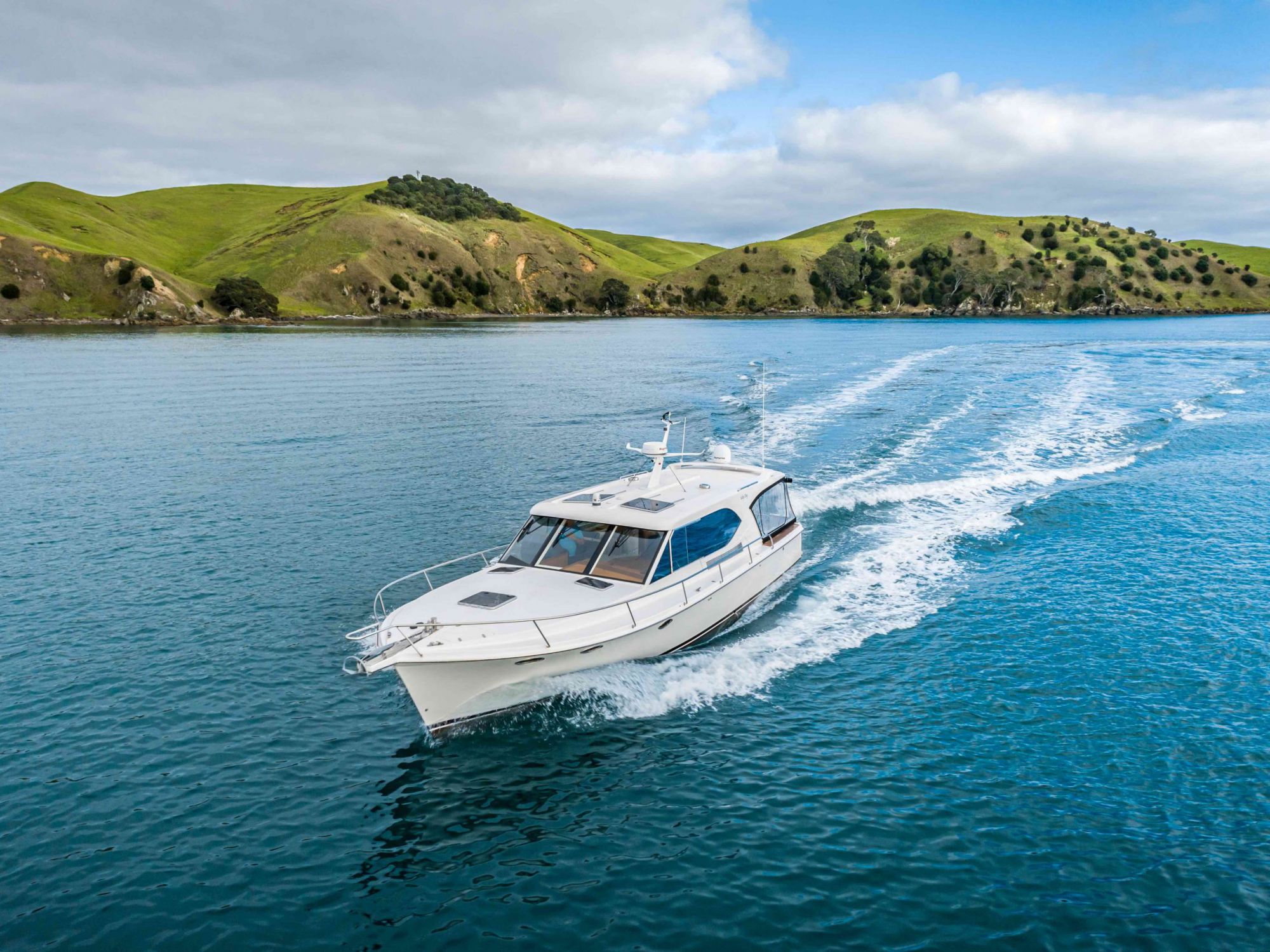 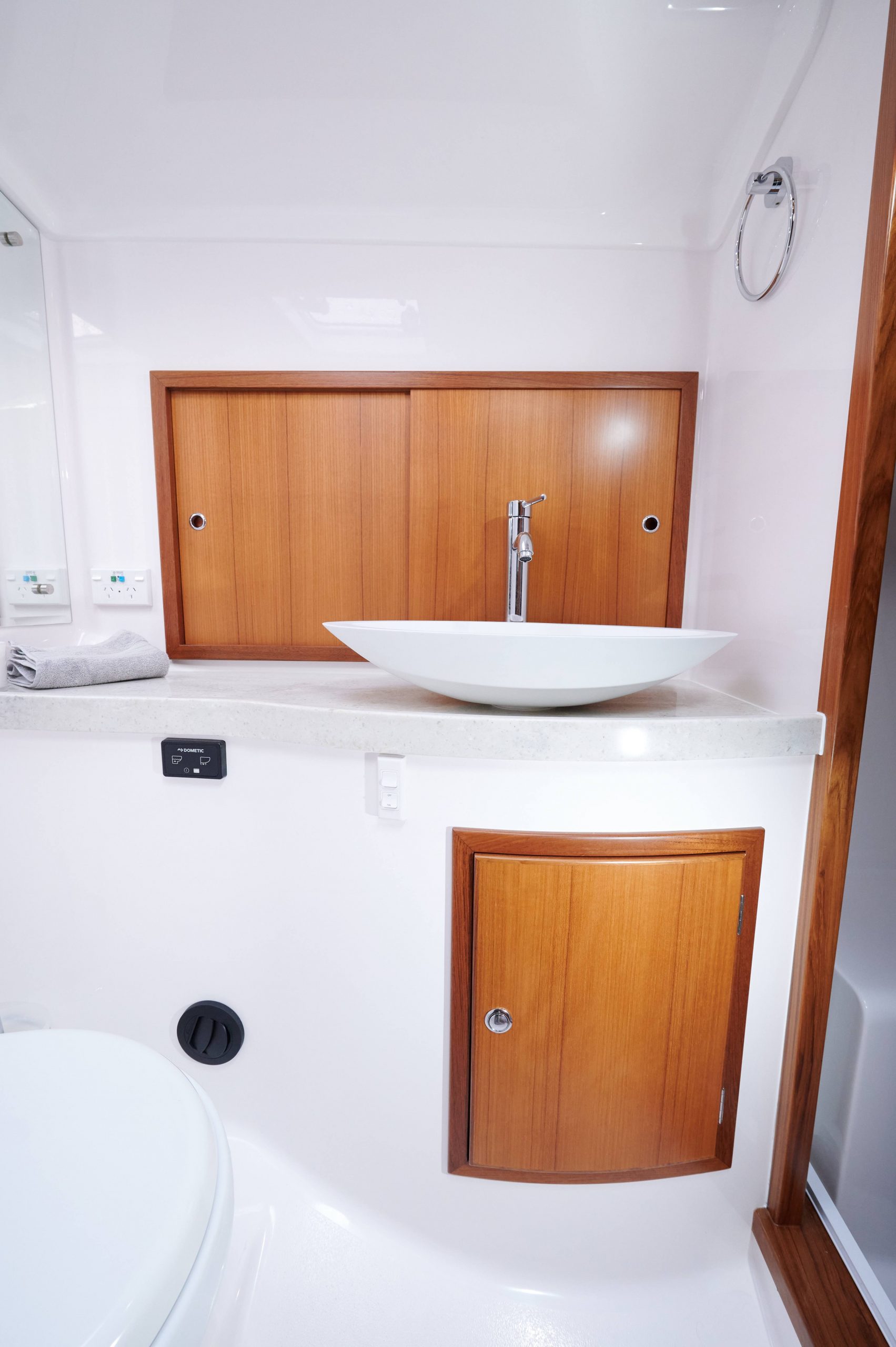 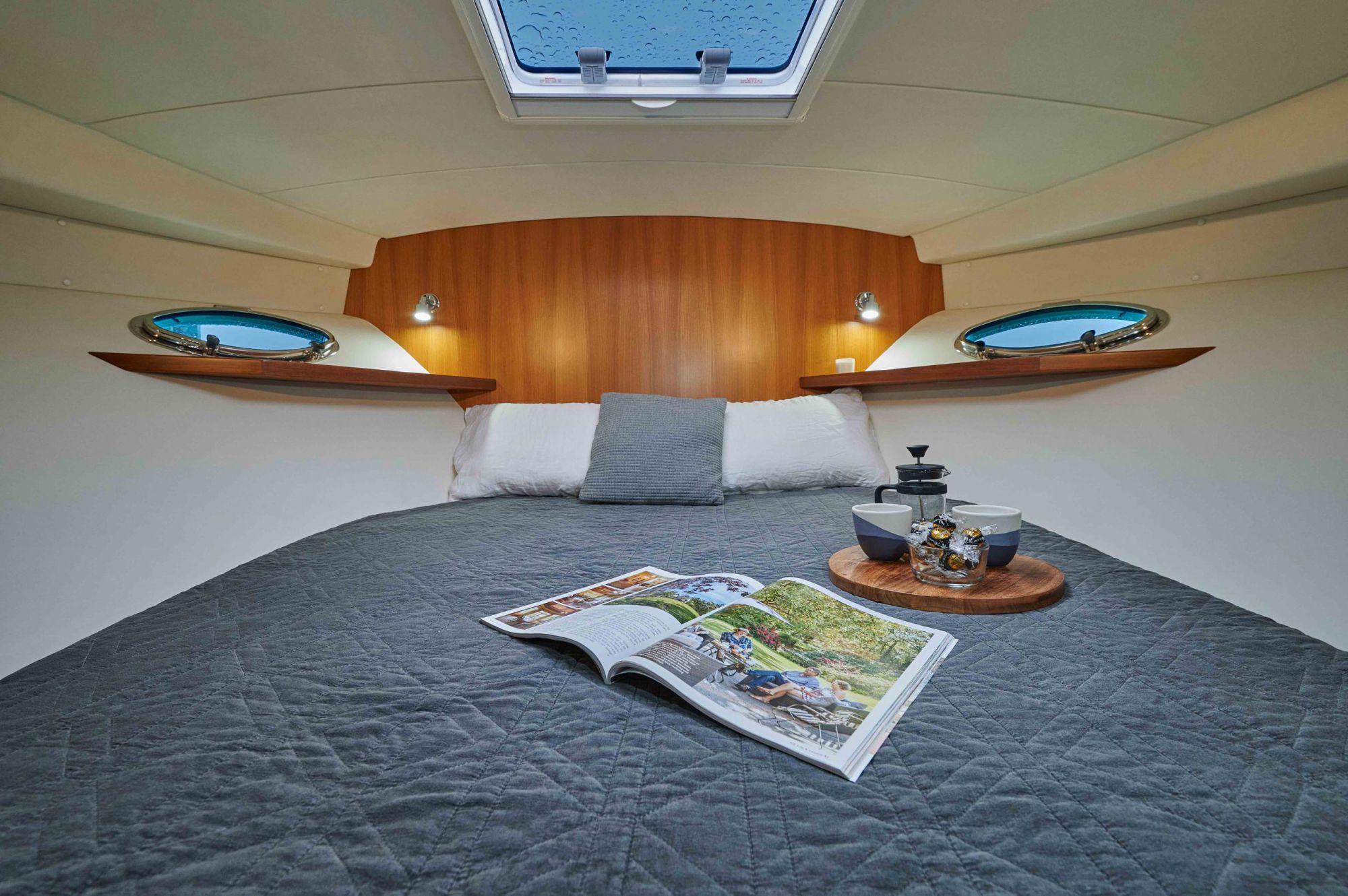 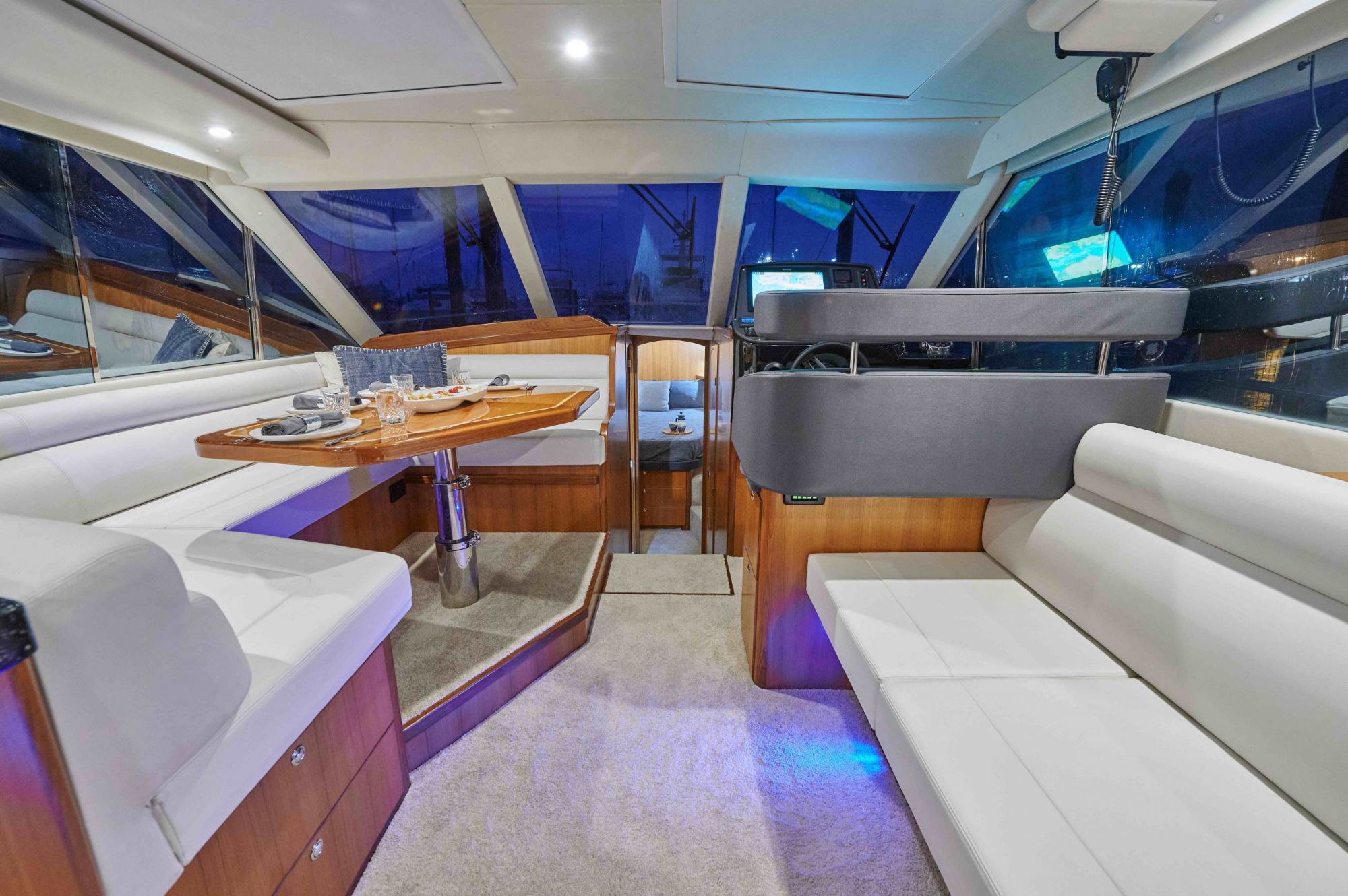 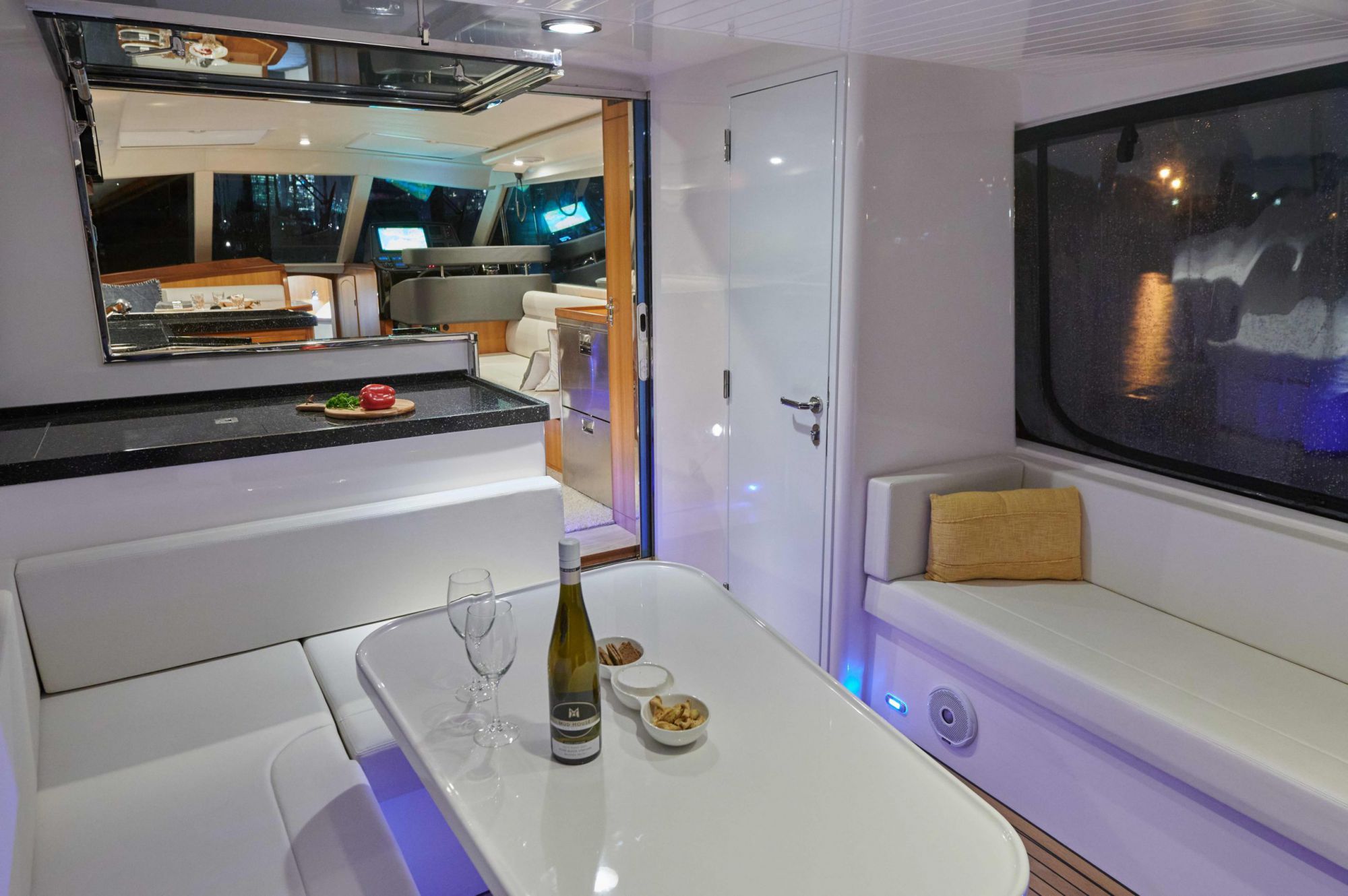 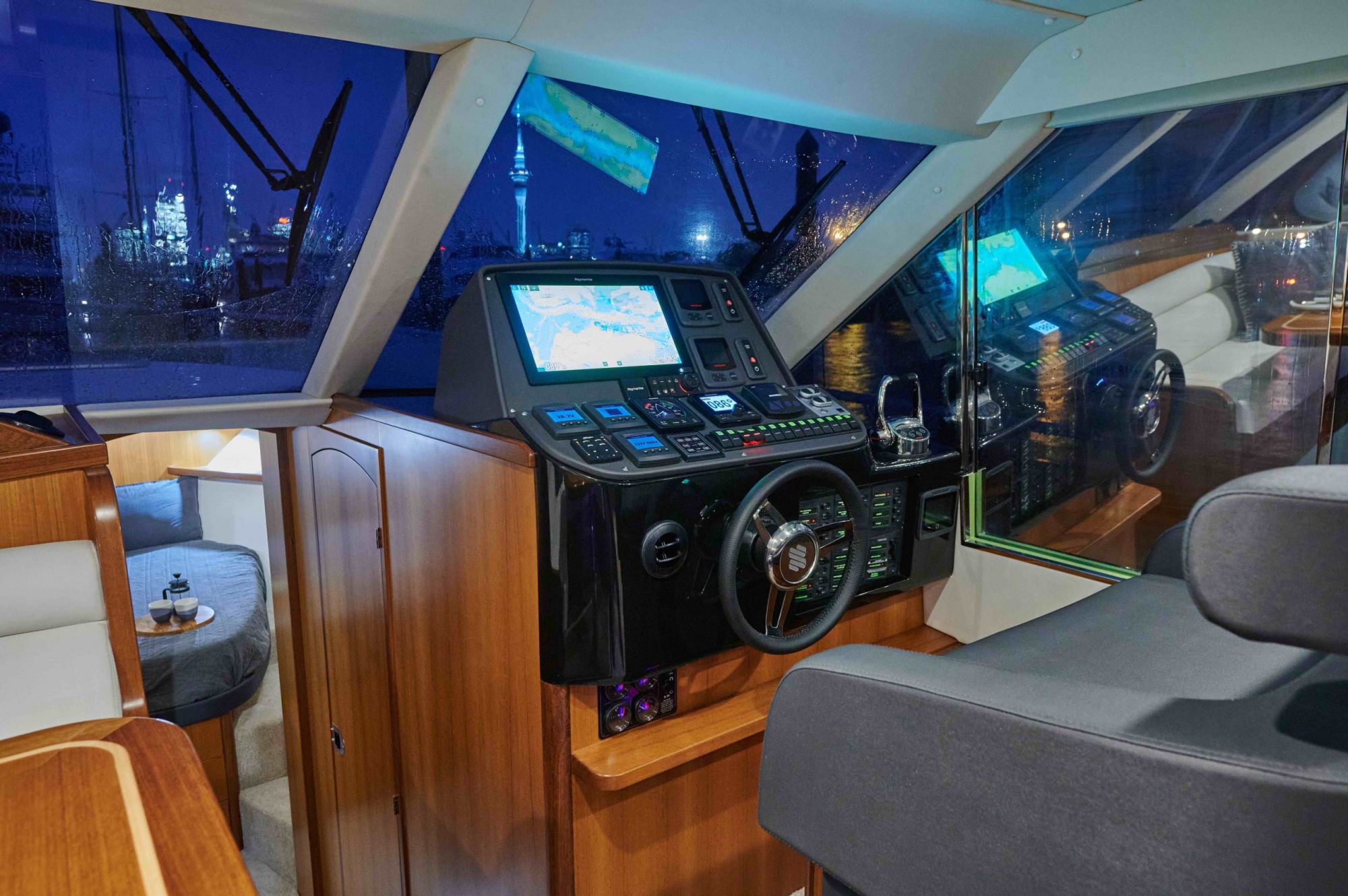 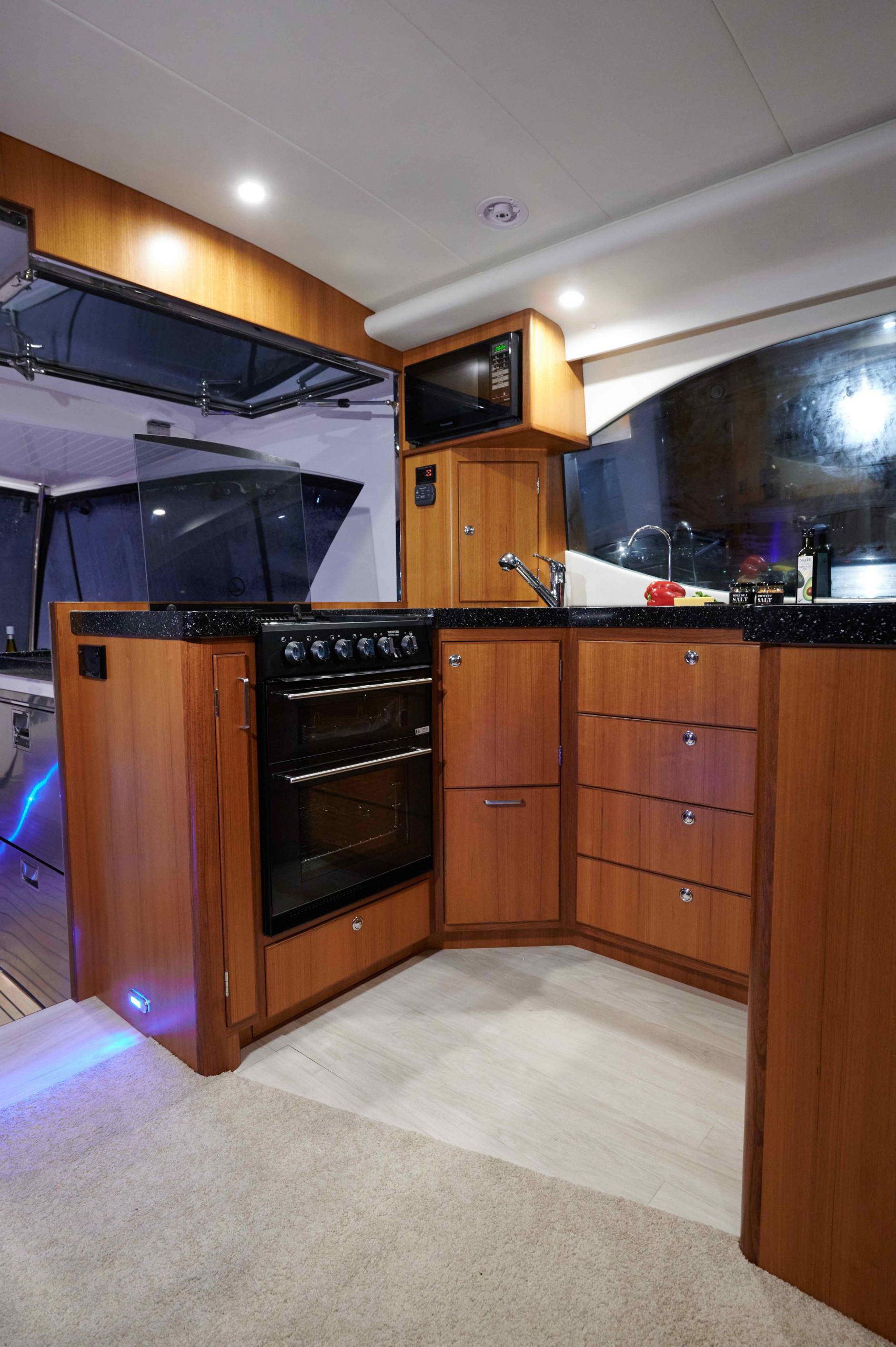 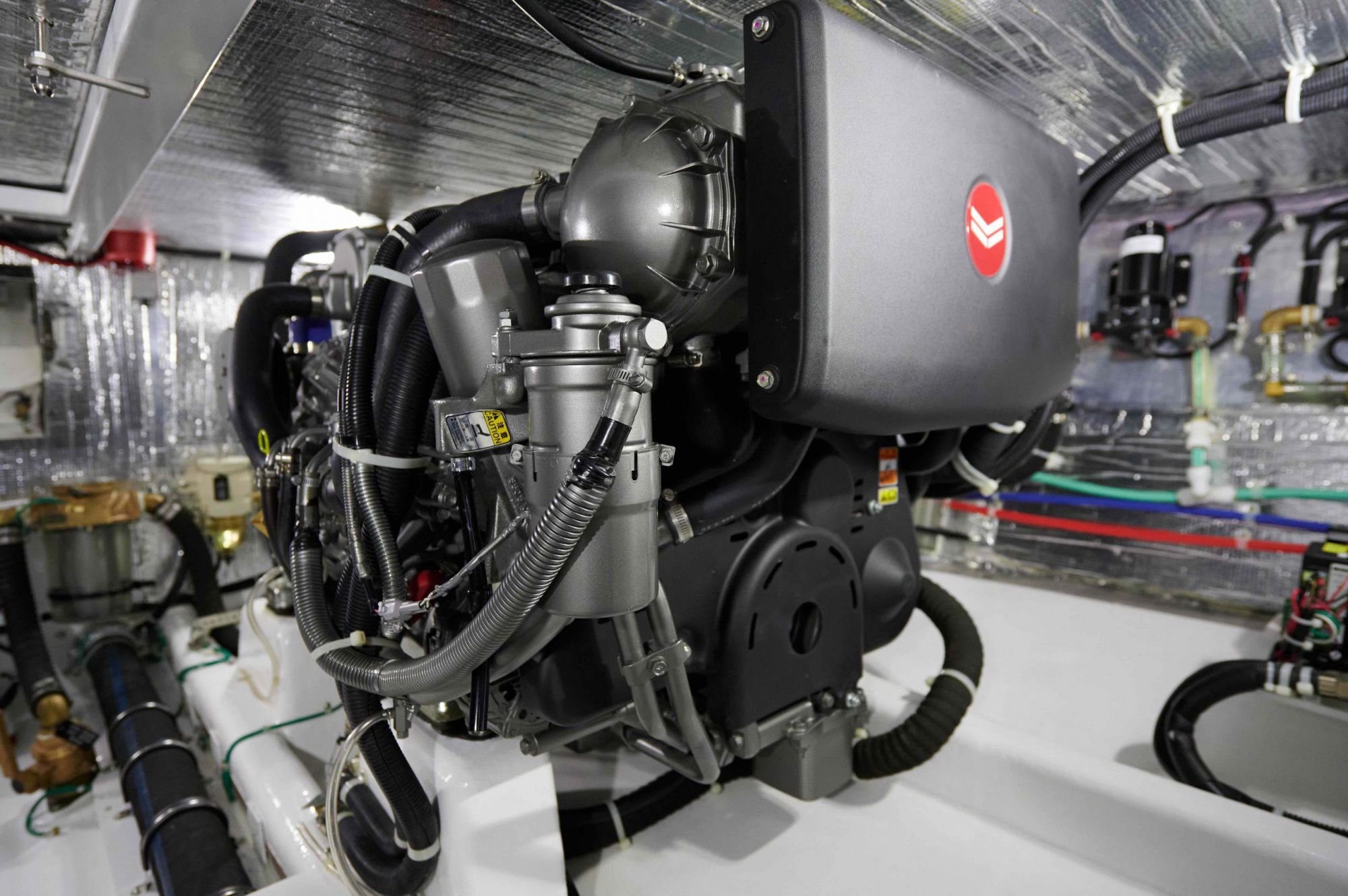 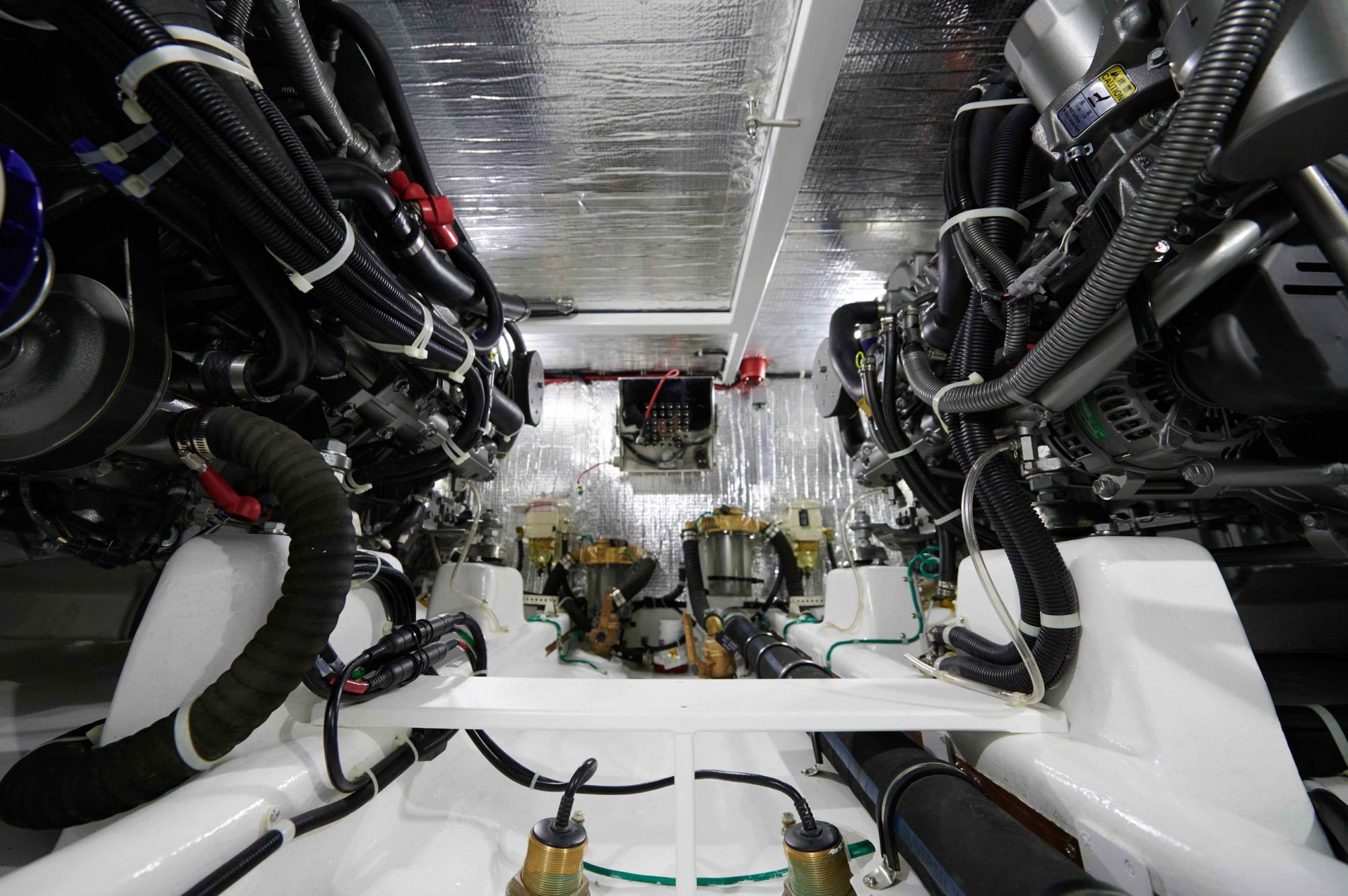 “Having owned and operated five M44, and seriously tested both the M44 and M49 in extreme conditions (and I mean New Zealand extreme), both vessels have many similarities and different strengths when directly compared,” explained Salthouse.

“Whether it’s steaming from Australia to New Zealand in the M49 after the launch of the first hull, crossing Cook Straight (the body of water between the North and South islands of New Zealand) in 30′ seas, or delivering an M44 from Auckland around the top of New Zealand and then down to Nelson at the top of the South Island, these experiences only increase the faith and reputation of these models.”

The original M44 design from Salthouse, on which the M49 is based, has an enthusiastic following. In New Zealand, its applications vary from customs patrol, police patrol, commercial fishing to deep-sea game fishing.

The Hylas M49 features a lengthened aft cockpit over the M44 on which it is based, adding 1.40-metres to the LOA and 0.81-metres to the waterline.

The M49 features an airy interior layout, which offers two large accommodation cabins and two heads – Master and day heads. The forward owner’s cabin can be configured with a conventional island double or with five single bunks.

The guest cabin position just aft to port comes as standard with a twin berth with infill and a further bunk berth above and outboard, which can be converted to storage space. The large lower deck heads compartment features an electric head as standard (switchable between fresh or saltwater), acrylic stone counters, and a dedicated shower cubicle.

The forward end of the pilothouse features the helm station to starboard. There is a double helm seat and a large instrument console capable of accommodating twin 12″ plotter/radar screens. A stainless steel framed sliding door allows access to the side decks.

Opposite the helm station is the dinette featuring a large U-shaped settee and a large dining table, which is height adjustable. An infill to create a daybed or occasionally double berth is included as standard.

Aft of the helm station is a further lounge settee followed by cabinetry containing the twin stainless steel drawer fridges and the pullout pantry. Opposite the pantry is the U-shaped large galley with cooker, microwave, freezer and twin sinks set into the acrylic stone counters. Access to the cockpit is granted via a stainless steel framed sliding door.

Ventilation in the pilot house is a notable feature of Hylas Motor Yachts. In addition to the cockpit door and the helm station deck access, there are also two larger sliding ‘sunroof’ deckhead hatches, a further sliding window adjacent the dinette, and a fantastic opening stainless steel framed window aft the galley, enabling the pilot house and cockpit areas to be joined together with no visual interruption.

The cockpit consists of an L-shaped settee to port with a height adjustable table, which can be turned into a sunbed or occasional outdoors double berth using the infill supplied as standard. Opposite to starboard is a linear sofa. The extended cockpit in the M49 allows for fitment of a wet bar, further locker space and “pop up” grill for alfresco dining.

The aft end of the cockpit can be opened out to allow a tender to be brought up into the cockpit area (there are also dedicated dinghy tie-down points on the pilothouse roof). At the stern is a large bathing platform area with stainless steel guardrails. For those transiting inland waterways, the antenna mast can be hinged to reduce air draft to just 3.36-metres.