From a fuel-cell 50-metre hitting the water in 2024 to a new line of multihulls, Italian yard Sanlorenzo is aiming – and riding – high.

Sanlorenzo has thrown down the gauntlet to other yacht builders with the announcement by Executive Chairman Massimo Perotti that, off the back of Sanlorenzo’s exclusivity agreement with Siemens Energy signed in September last year, the yard is building a 50-metre yacht equipped with fuel cells that it is aiming to launch in 2024. It’s a dramatic statement of intent by the Italian yacht builder in what many consider to be the future of power generation on yachts.

Sanlorenzo appears to be riding the surge of a wave at the moment, with its latest financials – released to the press on 3 February – suggesting a strong position with more than €1 billion backlog of orders, 90 percent of which are backed by contracts from final clients.

The announcement came with more details of new model ranges that are being added to Sanlorenzo’s line-up, including the new SP line of yachts, the 44-metre entry-level X-Space explorer unveiled last year, and the new multihull series that will be known as BGM being built under the Bluegame brand.

Perotti also outlined plans for expansion in the Asia-Pacific region over the coming years, citing encouraging signs from the Chinese government toward marina investment as a sign of evolving market potential. 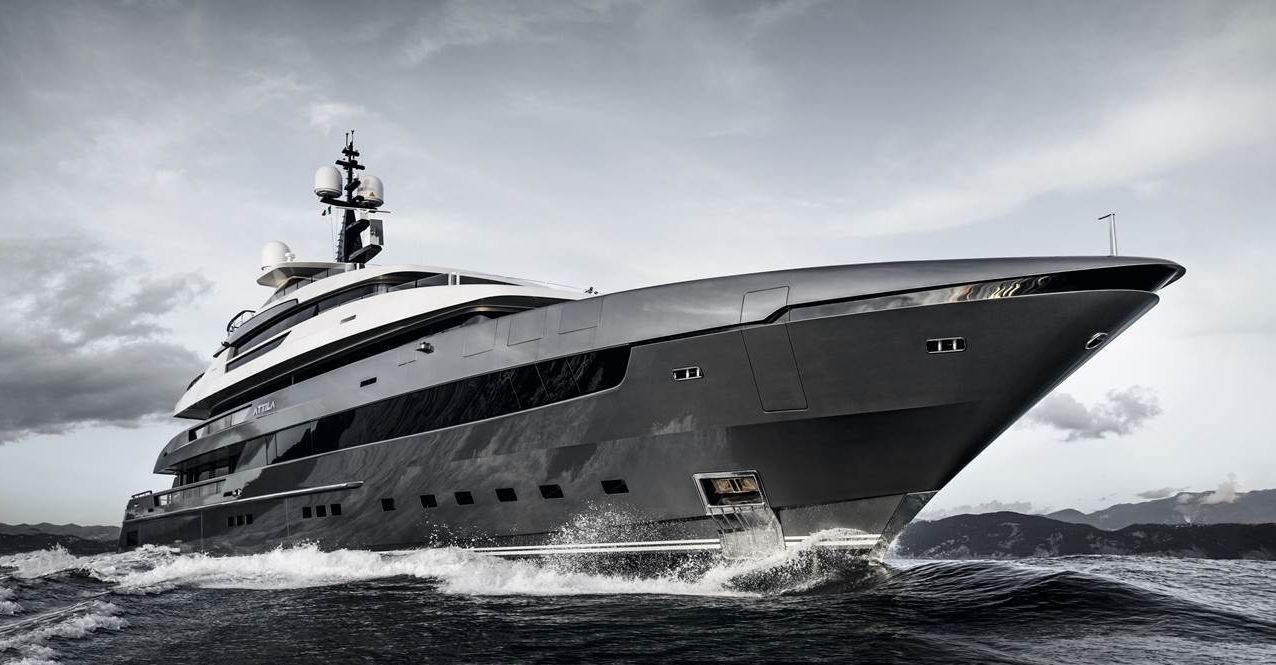 Sanlorenzo's range stretches from the innovative Bluegame yachts to the 70-metre Steel, and wlll soon include a hydrogen fuel cell yacht and multihulls. (Supplied: Sanlorenzo.)

“Our goal for 2022 and the beginning of 2023 is to increase our strength in the distribution of Sanlorenzo and Bluegame boats in Asia Pacific,” Perotti said.

On the hydrogen yacht, which will use a methanol-reformer to create hydrogen for a fuel cell that will cater to the domestic power requirements, Perotti says that it is a part of the yard’s sustainability goals and as such will be a milestone for the brand and for yachting as a whole.

“What is extremely important for Sanlorenzo but also for the yacht business worldwide is that we are going to launch the first 50-metre yacht within 2024,” he offered.

The research being undertaken with Siemens Energy – and the exclusivity deal, which Perotti confirmed relates to boats between 24 and 80 metres LOA – is designed to counter the problem of installing large banks of batteries on board yachts.

“We think that system does not really work well for large yachts,” he explained, “because we have no possibility to recharge the batteries, and we load the boat with too much weight.

“The real solution for a sustainable product is to invest in fuel cells and we confirm that Sanlorenzo is at the top of this research, supported by Siemens Energy.”

Perotti alluded to larger fuel cell projects currently underway, and clearly is aiming to set the benchmark not only by including the tech in a more accessible size of yacht but also by getting a jump on some well-known Northern European competition.

“Our aim, our goal to be on the sea with the first 50-metre by 2024 is a really important sign to the market for the investment toward sustainable technology. It’s proof of the position of Sanlorenzo worldwide.” 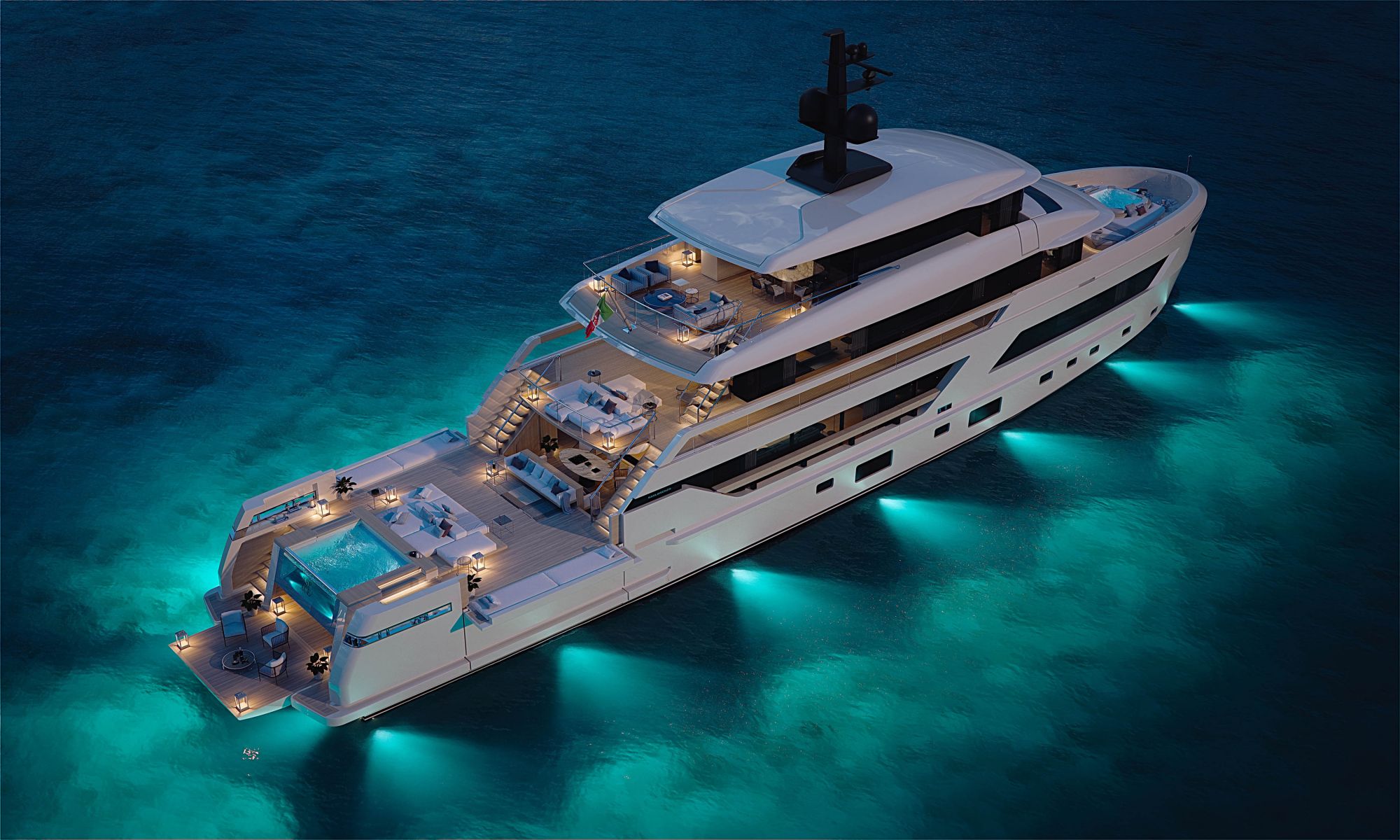 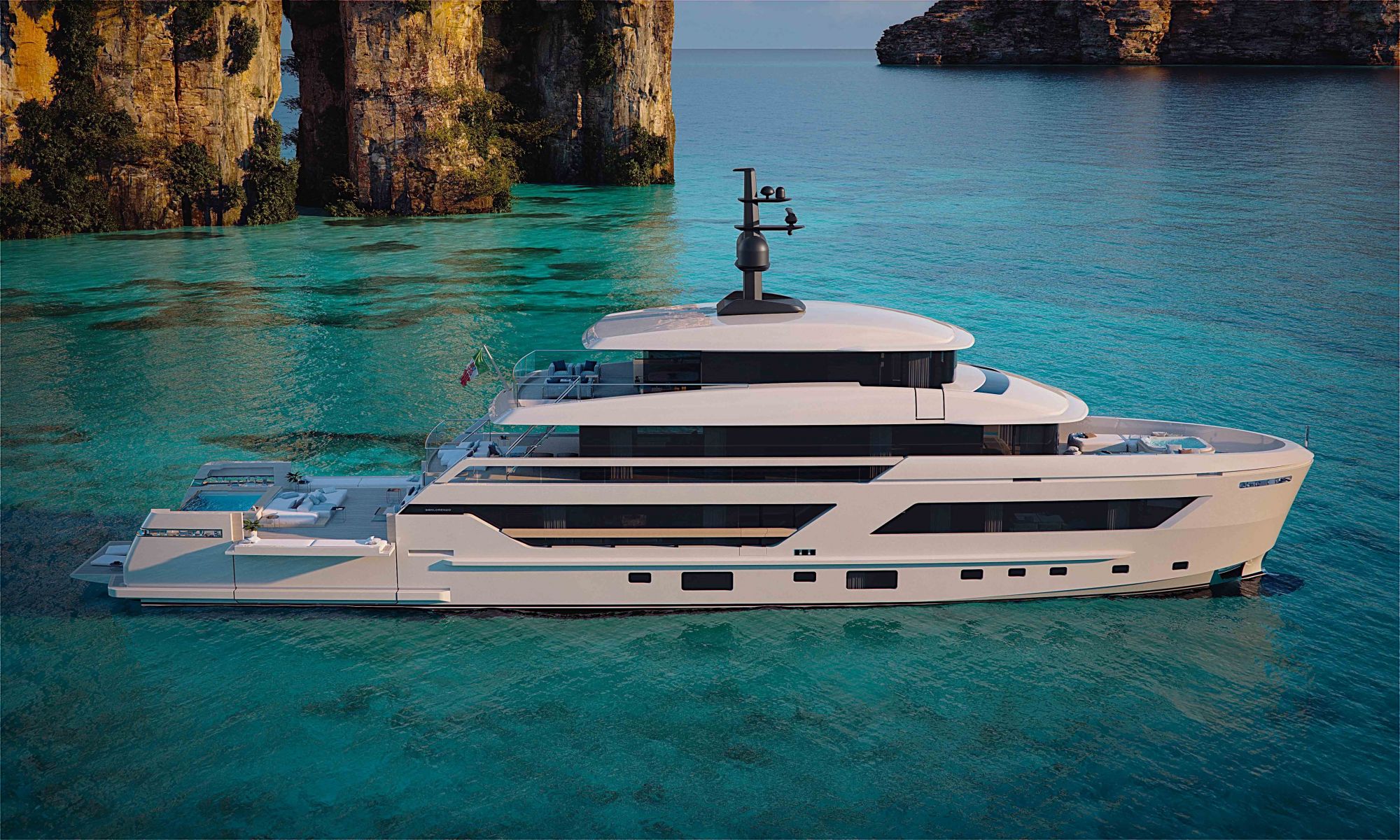 Sanlorenzo is clearly taking its sustainability mission seriously, as evidenced by the development of the BGM series. Details are still hard to come by, but Carla Demaria – CEO of the Bluegame division – hinted that the first model would appear sometime in the Spring.

“You won’t find a sketch of the BGM,” she teased, “because it’s a top-secret project. However,” she added, “it’s a stunning yacht in terms of profile and interiors that incidentally has two hulls. It’s a market with very big potential, and having two hulls gives lots of advantages.”

The naval architecture borrows from America’s Cup design to create ultra-efficient hulls and has been undertaken by legendary designer Philippe Briand.

Vacuum infusion construction includes the use of recyclable materials with carbon reinforcement to ensure light weight, and it will be powered using the first application of Volvo Penta’s hybrid powertrain, thanks to an exclusivity agreement Sanlorenzo signed with the manufacturer.

The BGM is, according to Demaria, the first model for which Sanlorenzo has built a prototype, and testing on that prototype has turned in some impressive results. The team compared their full size BGM75, featuring twin 600hp Volvo Penta engines, against a 90-foot equivalent semi-displacement yacht powered by twin 1,200hp MTUs.

“Over the use of 300 hours at an average speed of 18 knots [which Sanlorenzo estimated as a typical season’s usage] we save 175 tonnes of CO2,” Demaria explained. “That means 66,000 litres less fuel, and if we consider the customer, they will save €100,000. We consider this a big, big result.”

Also due to launch in Spring is the first of the SP line, where the SP stands for smart performance. The first to launch will be a 110-footer and sustainability was once again a keyword. Aside from lightweight construction, the yacht will feature an SCR exhaust system to control emissions and an expanse of solar panels linked to a lithium-ion battery bank.

Watch this space for more on the hydrogen yacht and BGM.