The latest addition to Riva’s new flybridge range, Riva 90' Argo is an exciting chapter in the brand’s story, with its extremely sizeable spaces, new cockpit layout and double master cabin.

In addition to its mythological name, the new Riva 90’ Argo boasts captivating innovation and design. Its eye-catchingly streamlined and dynamic profile will soon be available in seas all over the world.

With a length of 28.49 metres and a beam of 6.50 metres, the creation is based on a naval project that combines and enhances the strengths of its two Riva predecessors, the 100’ Corsaro and 110’ Dolcevita.

“We chose a name from Greek mythology for the new flybridge in the Riva fleet: the Argo was the first ever ship to sail the seas and the famous Argonauts set out in it on their quest to find the Golden Fleece,” statedAlberto Galassi, Ferretti Group CEO.“The Ancient Greeks were the first to lay down canons of beauty and perfection that are still espoused in creativity and designs today. The 90’ Argo is a flybridge that masterfully combines the spellbinding charm of timeless aesthetics with practicality, stylistic research and technological innovation.”

The Riva 90’ Argo is the fruit of a partnership between Officina Italiana Design (the studio founded by Mauro Micheli and Sergio Beretta) and Ferretti Group’sProduct Strategy Committee (headed by engineer Piero Ferrari) and Engineering Department.

The aerodynamic qualities of the new flybridge’s profile are highlighted by a number of distinctive, striking exterior design features, such as the large hull windows, the long, full-height glazed windows on the main deck and the aft lateral structures with glass surfaces. 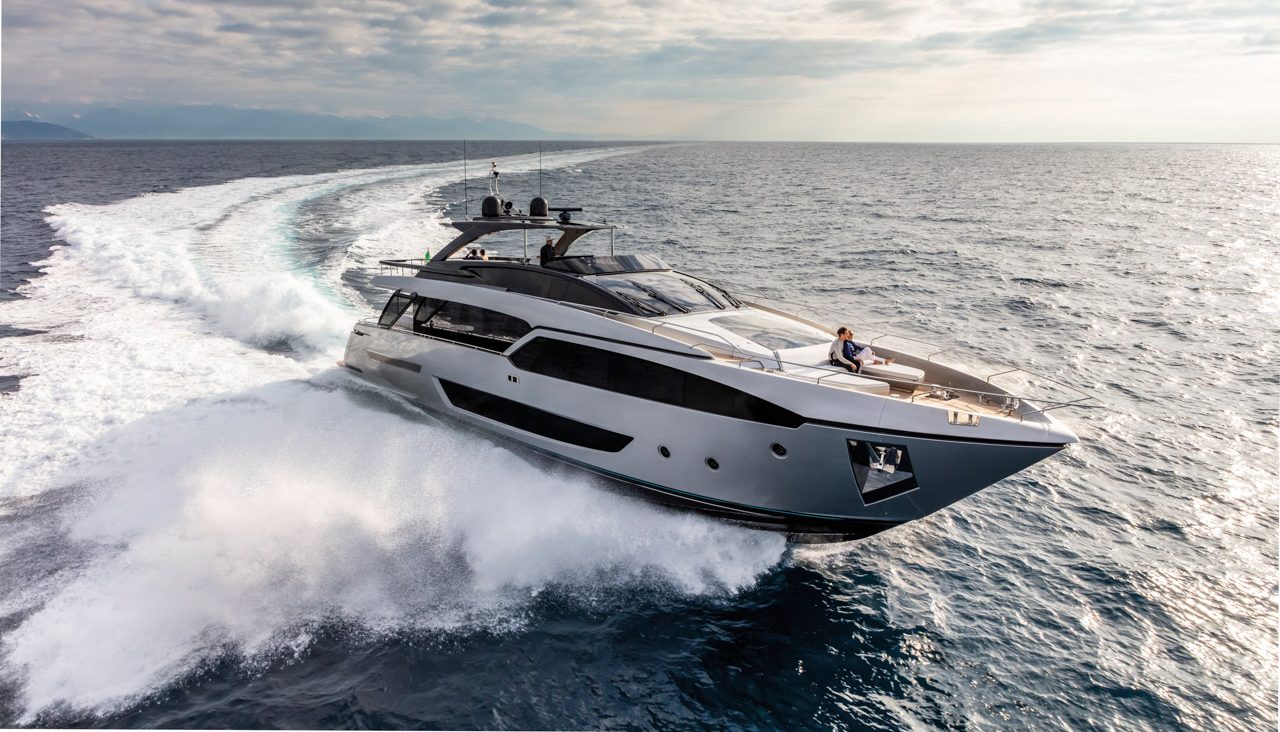 MAIN DECK
In the stern, the garage can accommodate a Williams Sportjet 395 tender and a jet ski, which can be launched independently: a real boon for a vessel of this size. The  six-square-metre swimming platform is equipped with an innovative retractable ladder: during underwater movement by the swimming platform, the steps on the right become partially submerged and reveal additional steps in the upper part of the stern, providing a single, convenient stairway for getting into the water and back on board. Consequently, there is no need to use the electro-hydraulic steel ladder, although it is still available.

The cockpit spans more than 30 metres squared, ina new layout that enables it to be used not only for socialising, but also for dining. Protection is provided aft by a fixed steel and glass windscreen. The furniture comes in the shape of two large sofas that are arranged lengthwise and a low central table. The sofas can move towards the table in the middle to form a big sun pad covering approximately six metres squared. The table can also serve as a dining table for up to eight people. This area was created to enhance the experience at anchor, as there are no architectural features that block direct contact with the maritime surroundings. The flybridge access staircase is recessed in the superstructure, which protects it and conceals it in side views, thus raising the standards of comfort and safety. To cater to the needs of the American market, an alternative cockpit layout has also been developed. It comes with a bar unit, two stools, two sofas and a coffee table by Paola Lenti.

On the main deck, a large frame supports the superstructure and runs around the outside of the full-height glass windows. The spacious lounge covering almost 40m2 is open to the sea and reaches heights of over 2.1 metres. It is furnished with two lounge chairs, an L-shaped sofa and a TV mounted in a panel with a stainless steel perimeter and mirrored surfaces. Beyond it is the dining area, with a large table and seats for eight people. A special touch is added by incorporating a panoramic balcony on each side, near the windows.

Just like on large ships, the central area regulates guest and crew flows and separates their paths. On the port side is the entrance to the galley, which also has a dedicated access door on the outer walkway and stairs down to the crew area. Moving starboard, you will find the entrance to the raised helm station, which is equipped with an electro-hydraulic steering system and an integrated LOOP bridge developed in conjunction with Naviop-Simrad. The latter features a number of 16” or 19” touch screens that encompass all of the on-board monitoring systems and navigation instruments, allowing the captain to run the entire yacht. Beyond this area is the 30-square-metre full-beam master suite, with a bed in the centre, a walk-in wardrobe behind it and a large bathroom in the foredeck, at a slightly lower level. A central skylight helps to fill the suite with natural light.

There is a private lounge in the outdoor forward section that is screened by curtains and furnished with a C-shaped sofa. On request, a retractable table can be added to turn it into an additional dining area or sun pad. There are two large storage lockers for the crew.

LOWER DECK
The entrance to the lower deck is on the starboard bulwark of the main deck. It contains a day head and three VIP double cabins with ensuite bathrooms and ceilings over two metres high. The 20-square-metre aft cabin is effectively a second full-beam master suite that makes guests feel like real owners. Behind the bed are a walk-in wardrobe and a large bathroom that contribute to the outstanding acoustic insulation, along with the distance from the technical zones and the specially developed soundproofing.

The crew area is in the foredeck of the lower deck. It contains a handy dinette and two twin cabins with bunk beds, each with its own bathroom and separate shower.

FLYBRIDGE AND INFINITY DECK
The vast flybridge of the new 90’ Argo spans a huge 46 square metres and it comes with freestanding aft furniture. In the middle on the port side, there is a bar unit with two stools. Opposite is a dining area with an L-shaped sofa, a Corian table with a stainless steel perimeter and some chairs. On the starboard side of the foredeck, there is a retractable monkey bridge with a co-pilot’s sofa on the port side. A glass skylight in the hard top helps to increase the natural light in the area.

Like the Riva 110’ Dolcevita, the 90’ Argo has an ‘infinity deck’ with uninterrupted living areas running from the stern to the foredeck, thanks to direct connections between the flybridge, the outdoor area forward and the cockpit.

The atmosphere in the first unit is established by the classic stylistic features associated with iconic Riva elegance on both the main deck and the lower deck, with materials such as lacquer, wood, leather and steel on display.
The main type of wood used is English walnut, which is the perfect match for the dark tones of the ceiling, the leather furniture coverings and thelighter hues of the parquet, fabrics, sofas and upholstery. A prominent role is also played by mirrored steel surfaces, which appear on the structural columns on the sides of the vessel, a number of items of furniture in the open space on the main deck, the stairway down to the guests’ area and the associated lobby.

The interior design scheme in the lounge includes a large titanium-coloured, L-shaped Andersen sofa by Minotti, a coffee table by Acerbis, and two Rivera armchairs by Frag. Cassina black leather chairs surround a glass dining table with a chrome base by Acerbis. The blend of materials and colours on show in the lounge can also be found in the owner’s cabin and the three guest cabins. English walnut takes centre stage, along with black lacquer ceilings with white lacquer sections, and steel structural columns that create a marvellous mirror effect. Complementing all of this are the white leather covering the beds, headboard walls and bedside tables, the black leather and lacquer on the TV stand and desk/dressing table in the owner’s cabin, and the steel units with TV mirrors in the guest cabins. The furnishings are by Casamance, Penelopeoggi, RevéHome and Gentili&Mosconi. In the bathrooms, there is magnificent Calacatta Australe marble on the surfaces of the washbasins, showers and floors.

All of the pieces of freestanding furniture on the flybridge are by Roda.

One particularly innovative feature is Twin Disc’s E-Steer solution with Dual Bus and Speed Sensing technology: the electronic steering system uses reliable hydraulic power to control the rudders dynamically and independently. They are moved into the ideal angles at all speeds, thus maintaining speed during turns and improving handling.