Our America's Cup correspondent Rebecca Hayter reports on the extent of the repair job as American Magic attempts to get Patriot back into the Prada Cup.

Watching Terry Hutchinson’s leadership in action within hours of Patriot’s spectacular sky-jump, you had to wonder if he might want to live in a big white house on Pennsylvania Avenue when he’s retired from America’s Cup racing.

The boat that represented the dreams of his team had a hole big enough to drive a small car through, and hours before he had executed a Houdini-esque manoeuvre, including cutting himself free with help from his crew to get out from beneath a mainsail that was sealing him off from fresh air. Some people would check in for post-trauma counselling, but Hutchinson reassured his shattered shore team and sailing teams before facing the media the next morning, albeit with emotions only just in check.

In between, he had been involved in a desperate bid to prevent their boat from sinking to the bottom of the Hauraki Gulf.

Theories abounded on what heavy object might have flown through the boat and busted out in a square-shaped hole, but more likely, it seems, Patriot’s sky-jump and landing exceeded the limits of her structural engineering.

When Patriot launched from the sea on Sunday 17 January, she was doing more than 40 knots. The 6.5-tonne boat burned off little speed as she left the water, airborne for perhaps three boat lengths. At its peak, her bow was nearly a boat length above the water. She crashed down, impacting on her bow sections.

“The boat’s designed for a certain amount of impact, but that was well beyond the threshold,” said Hutchinson. “If she had landed on her keel, it would have withstood the force.”

Patriot was structurally engineered to be stiff, light and strong, around a structure of longitudinal and transverse frames, but the panels encasing them were not designed for such concentrated impact. If they were, the boat would be too heavy to race successfully.

Structural engineers decide those parameters through a complex process of finite element analysis (FEA) in the boat’s design phase.

Having “stopped the bleeding” in the words of the ever-eloquent Hutchinson, emergency services and challenger support boats nursed Patriot back to the dock, arriving at midnight. By dawn the next day, the hull had been scanned by ultrasound and tapped by boatbuilders to find areas of delamination and damage.

American Magic retired from the remaining races in the round robins, which gave it 11 days to get back on the water for the semi-finals. At base, they sat down to make a plan.

Silvio Arrivabene, American Magic’s design production manager, said watching three and a half years’ work go low in the water was hard, “but after the plan, everybody was in much higher spirits.”

Since Patriot was built in the USA, American Magic urgently needed an Auckland boatbuilder. Their fairy godmother was the defender, Emirates Team New Zealand. By 23 January, it had delivered the panel, about half a boat length, for insertion in Patriot’s hull. It arrived as a blue plastic-covered, curved shape over a timber mould on a trailer behind a simple white pick-up truck, but it was a vital piece in American Magic’s recovery – and half a day ahead of the work schedule. The American Magic builders had the hull ready to receive it.

“I had to put down the tools to come over here,” Hutchinson said breezily to the assembled media. Everyone was suitably impressed that, apart from being a world-class sailor, he was also an America’s Cup class builder – but then he grinned. Oh, it was a joke. Seriously, someone nominate this guy for president.

But the hull panel was the easy part. 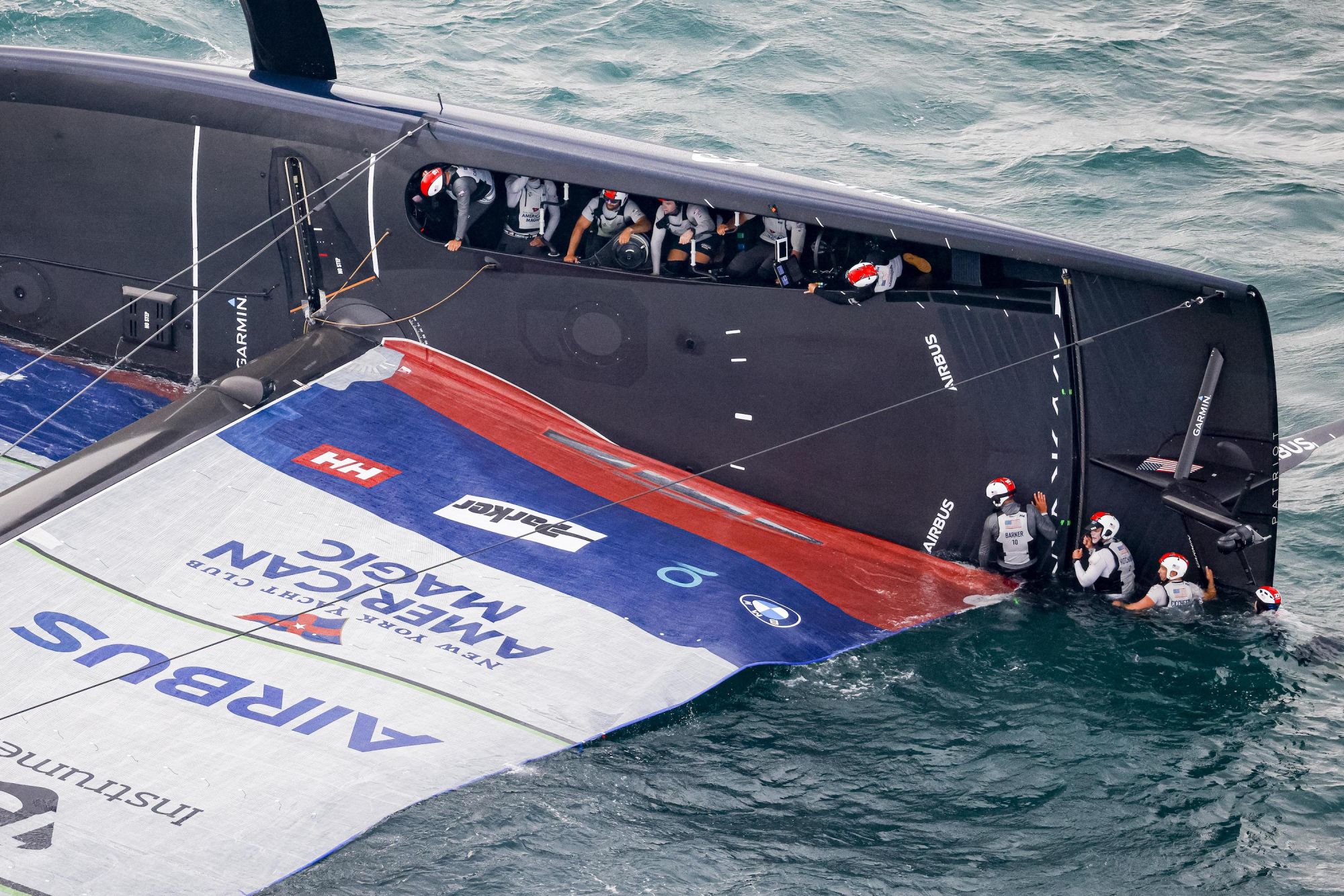 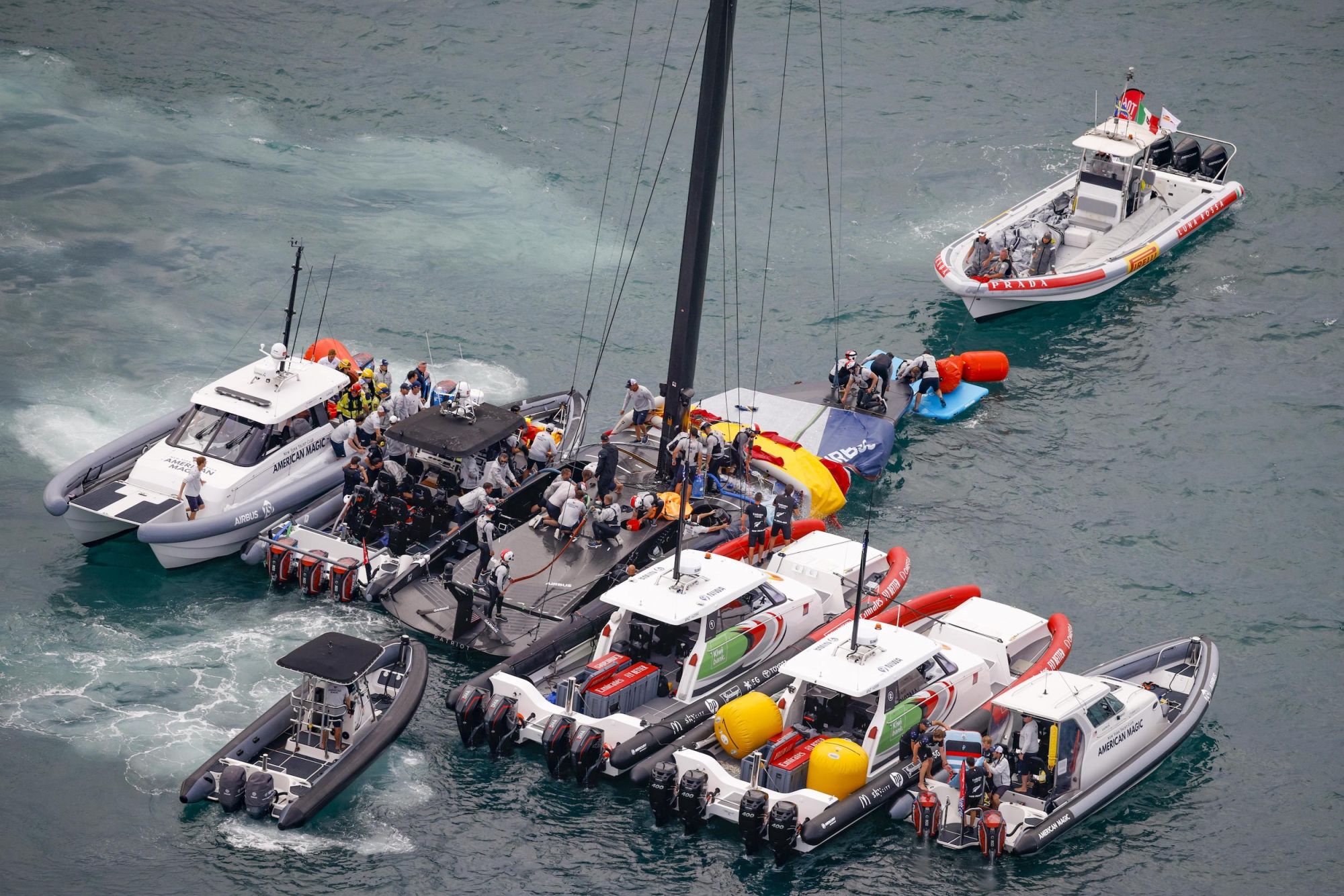 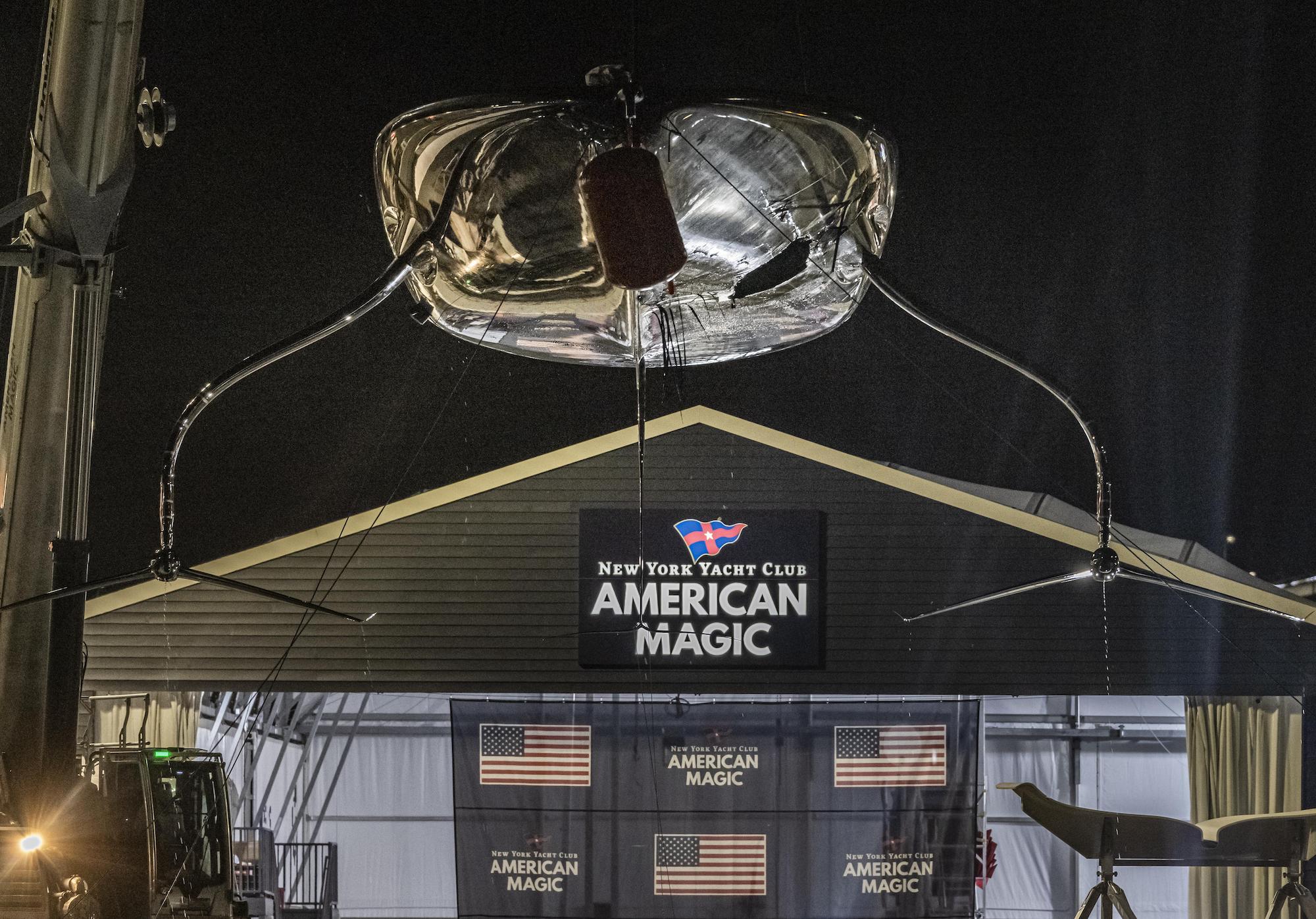 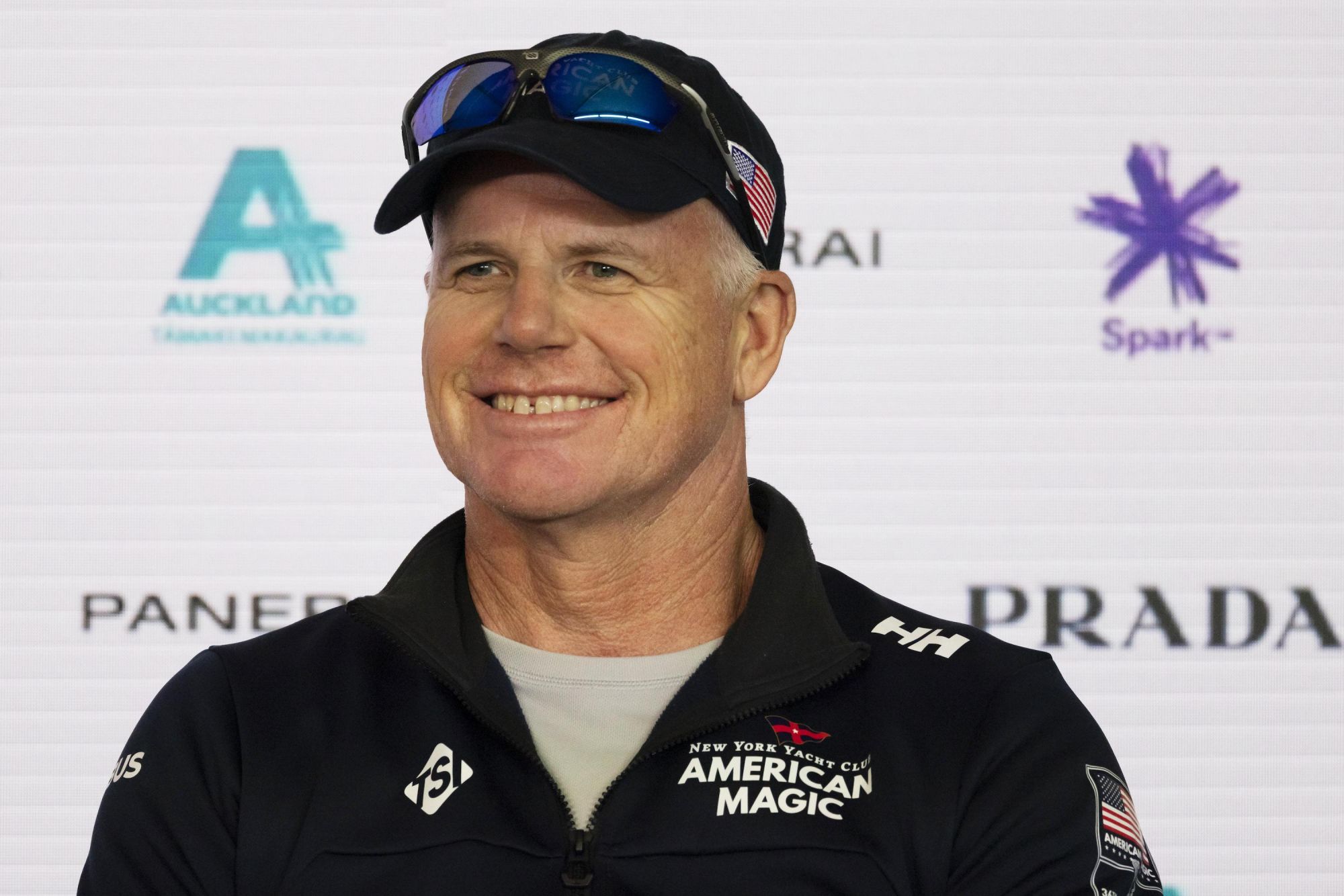 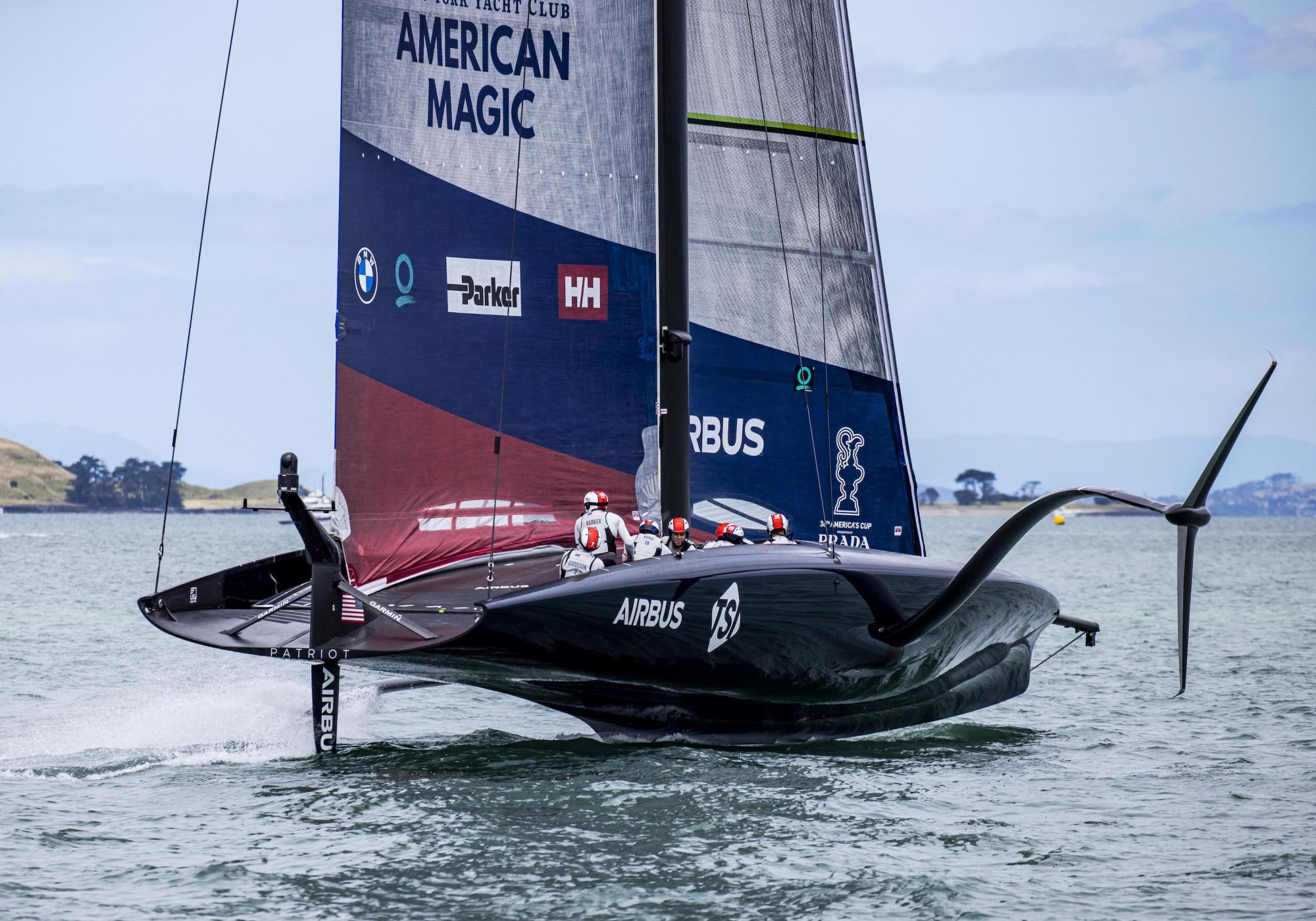 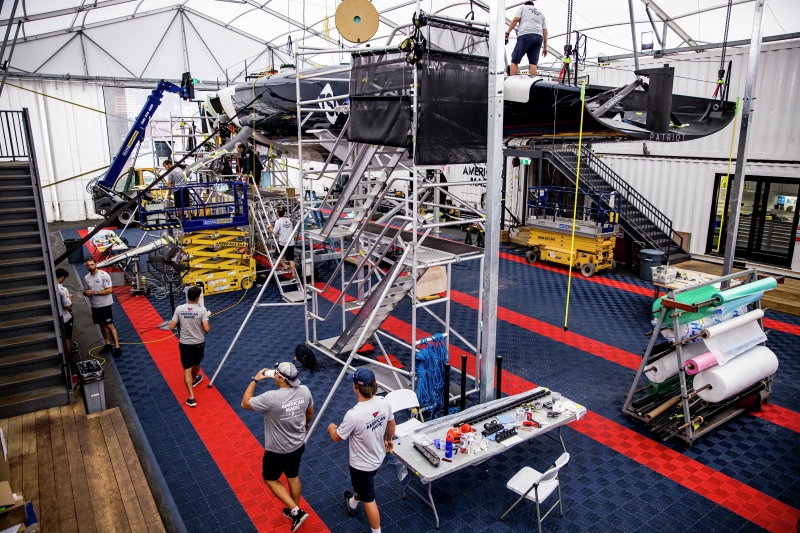 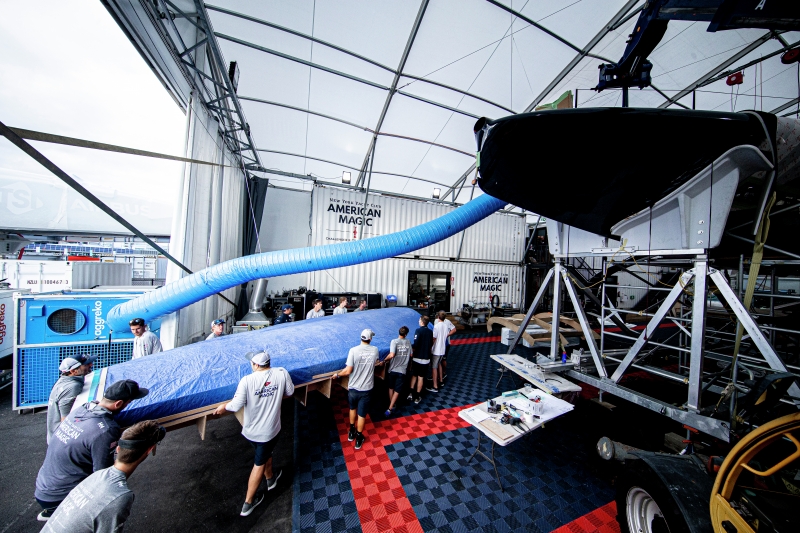 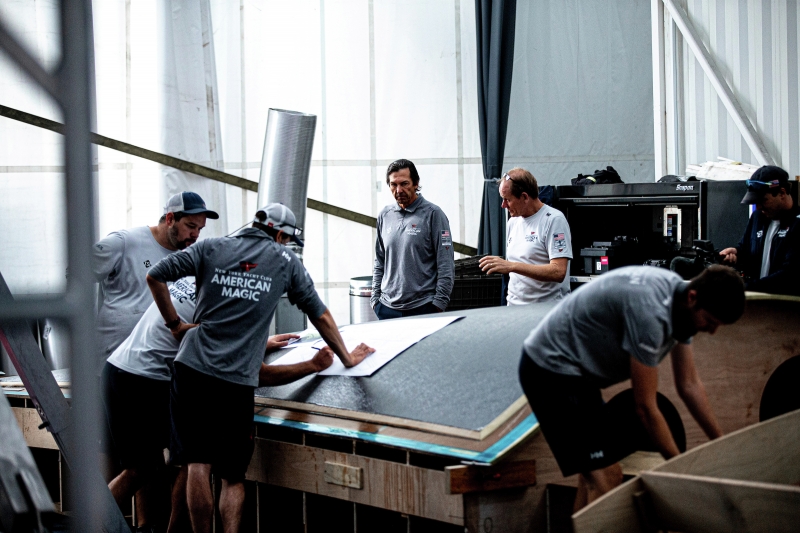 Patriot’s complex hydraulics and electronics are key to running the foiling, sailing and steering systems. The hydraulics, a closed system, were undamaged apart from requiring a thorough check, but the electronics were totalled after their salt-water submersion.

However, the American Magic shore team had recently overhauled a spare set of electronics that were being installed in Patriot. This is the most time-consuming part of the rebuild, and Hutchinson expects there will be a few gremlins to iron out.

“Everything has been taken out of the boat and tested. We are making great progress almost every hour,” he said. “The boat will be the same as it was a minute before we tipped her over.”

Of the foiling arms, Hutchinson said, “She’s done,” meaning at least one was beyond repair, but replacement foiling arms could be removed from Defiant, the team’s generation-one boat, for installation in Patriot.

“She coming to life pretty quickly,” said Hutchinson on 23 January. “We’ve had the foil cant system back on inside the boat and turned on as much as we can while they’re getting the structure back in.”

Hutchinson continued, “Getting the heartbeat of the boat going again is pretty exciting.”

They hope to be sailing by mid-week to gain testing time before their semi-final against Luna Rossa on Friday, 29 January.

Hutchinson thanked all the other syndicates who offered to help with labour and facilities to get Patriot back on the water, particularly Team New Zealand: “What the defender has done for us and what they have helped us achieve, because certainly without them it wouldn’t have happened,” he said.

The America’s Cup sees battles on the water and in the courtroom, but ultimately, it’s sportsmanship that will get Patriot to the semi-finals.