Oyster Yachts has a lot riding on the new 565. Still, the iconic British yard has created an exceptional design.

From the moment you step aboard the Oyster 565, it’s clear that every detail has been carefully considered to ensure maximum comfort and confidence at sea.

The spacious and clutter-free central cockpit manages to bag a great deal of prime space on deck for crew and guests without making anywhere else feel compromised. The result is that guests not only feel secure in the middle of the boat, but can move around easily without having to step over control lines, or indeed crew.

Separating the helm station from this area is another smart move. The twin wheels and their pedestals – which host all the necessary controls to manage the boat while under way, contributing to a clutter-free guest cockpit – are placed out to each side. This provides great visibility from the wheel under sail or power, and is also an easy and secure area to work the sheets and control lines that are led aft.

There is, of course, nothing new in the twin wheel, twin cockpit concept. On a large bluewater cruiser, you’d expect these features; what stands out is how it has been achieved on a 56-footer. 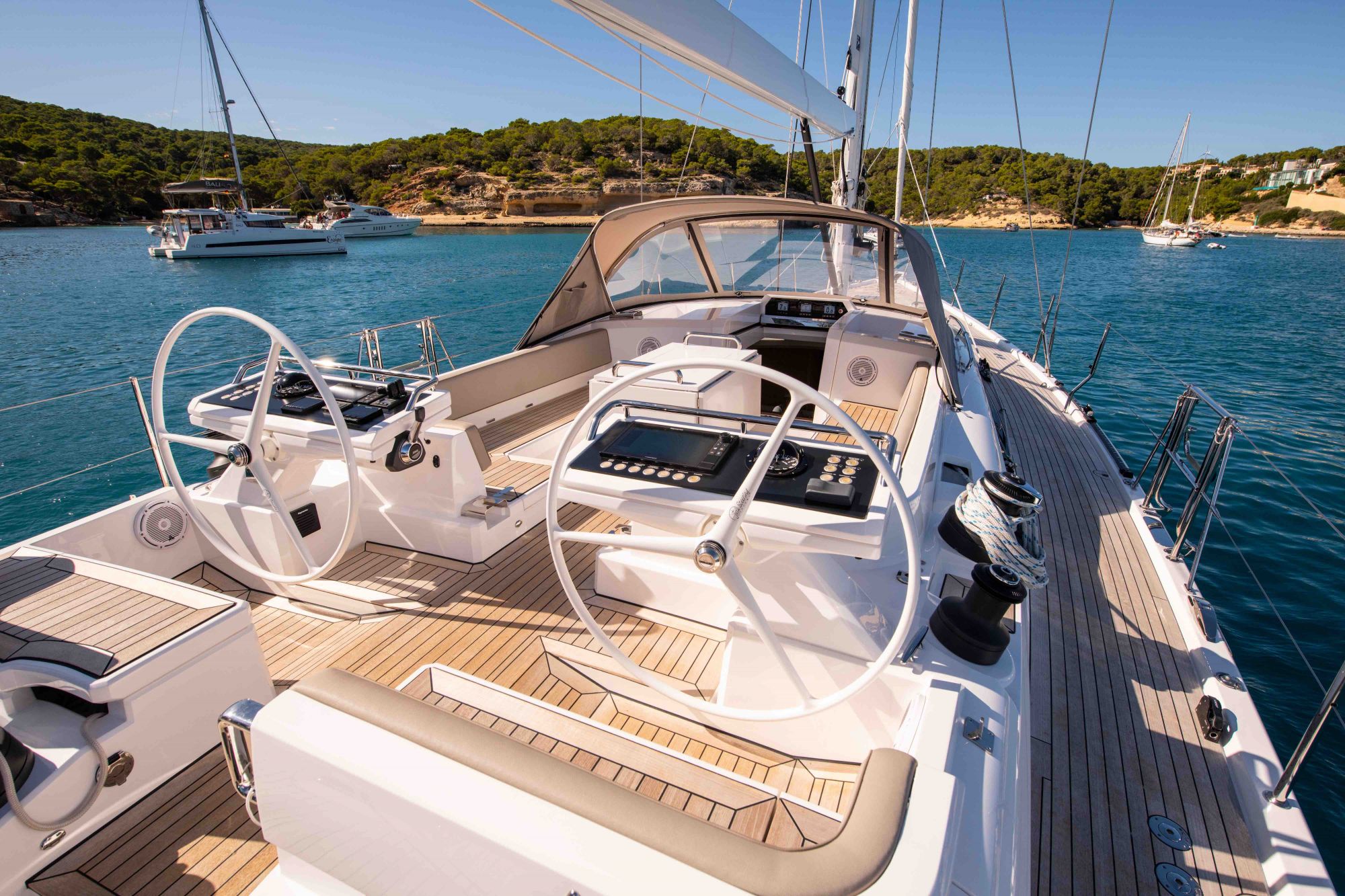 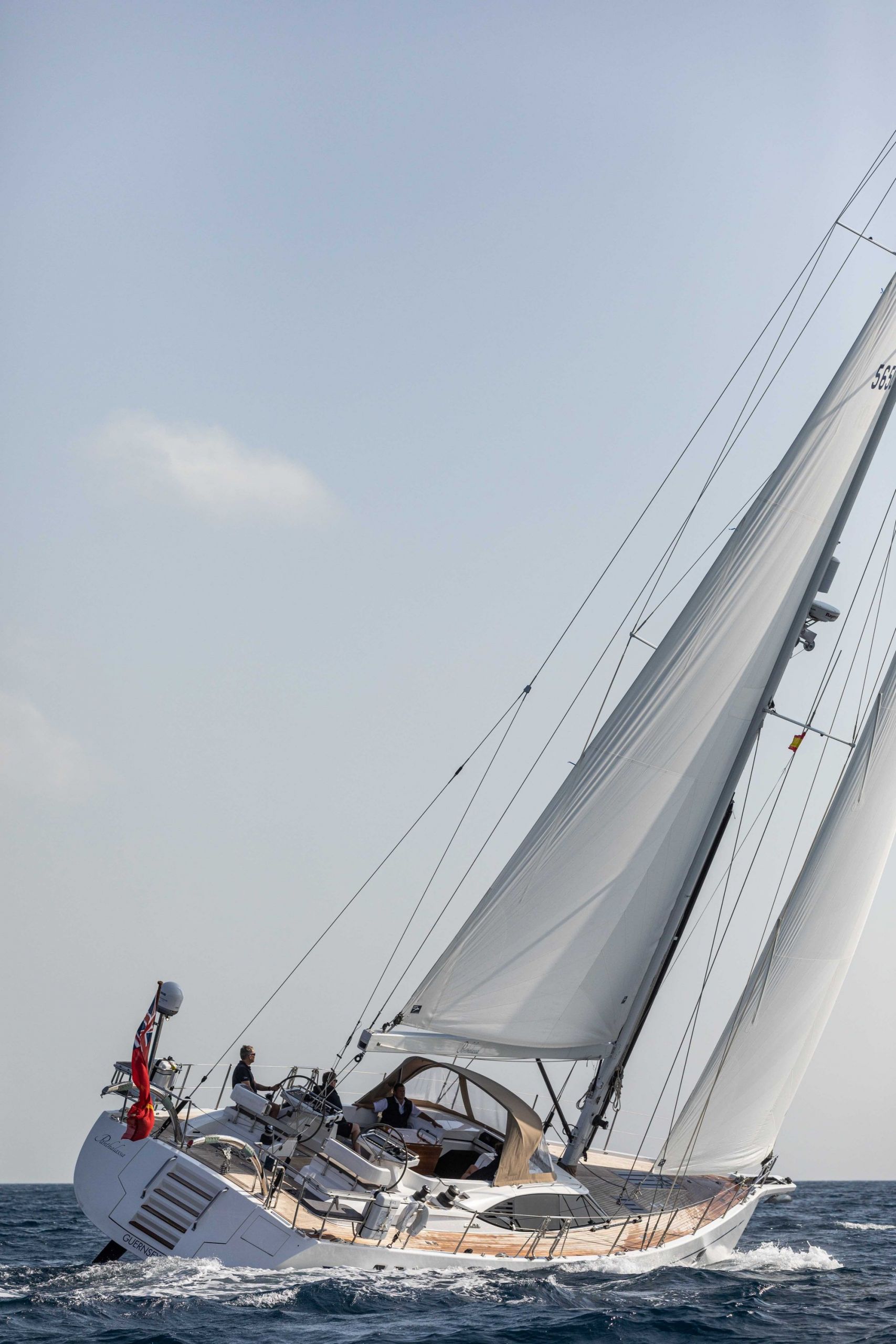 The blade jib means the 565 can point higher and tack or gybe faster and more easily than previous Oysters with cutter rigs. 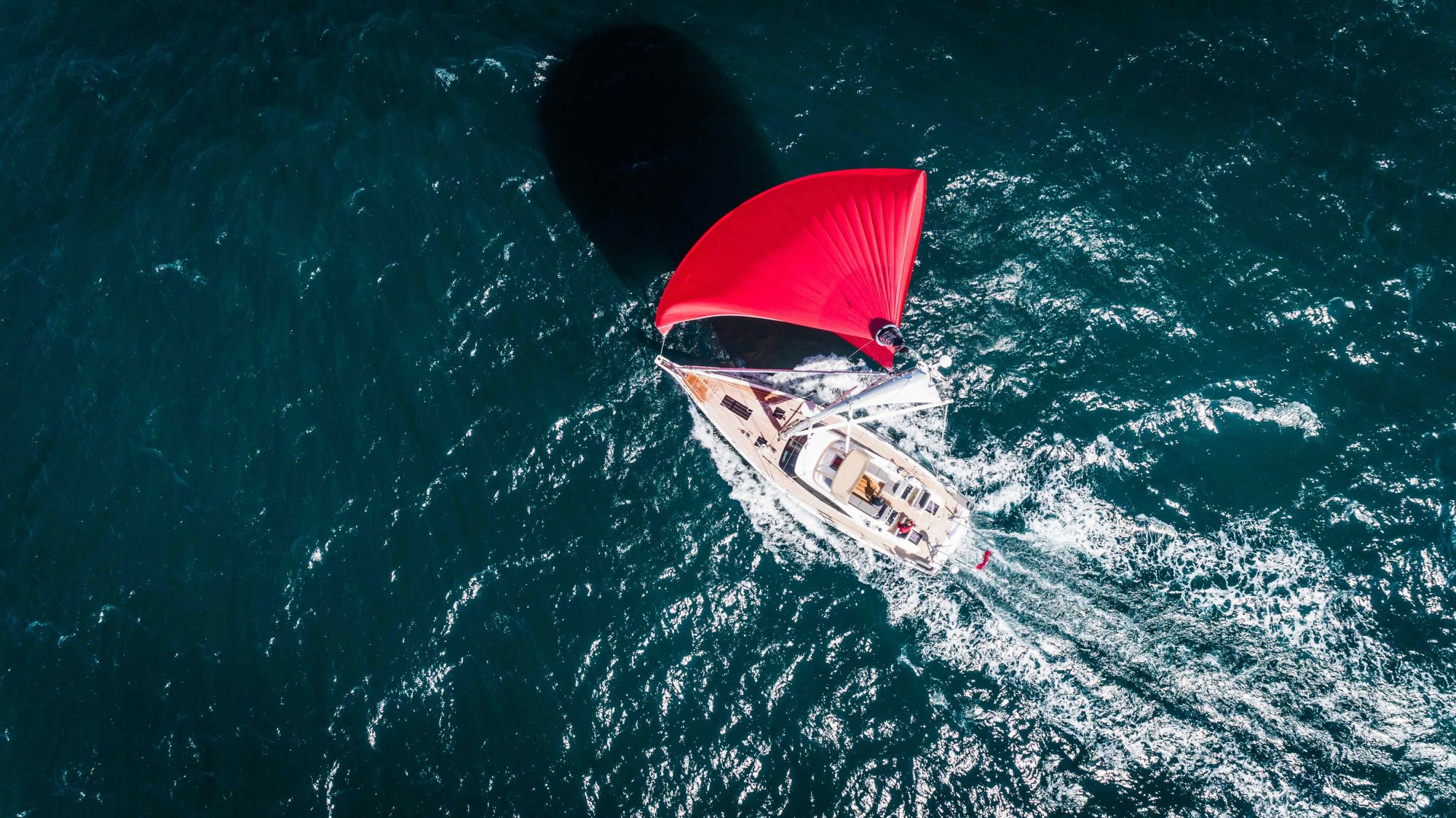 A powerful twin rudder hull form from Rob Humphreys delivers better performance at both ends of the breeze spectrum. 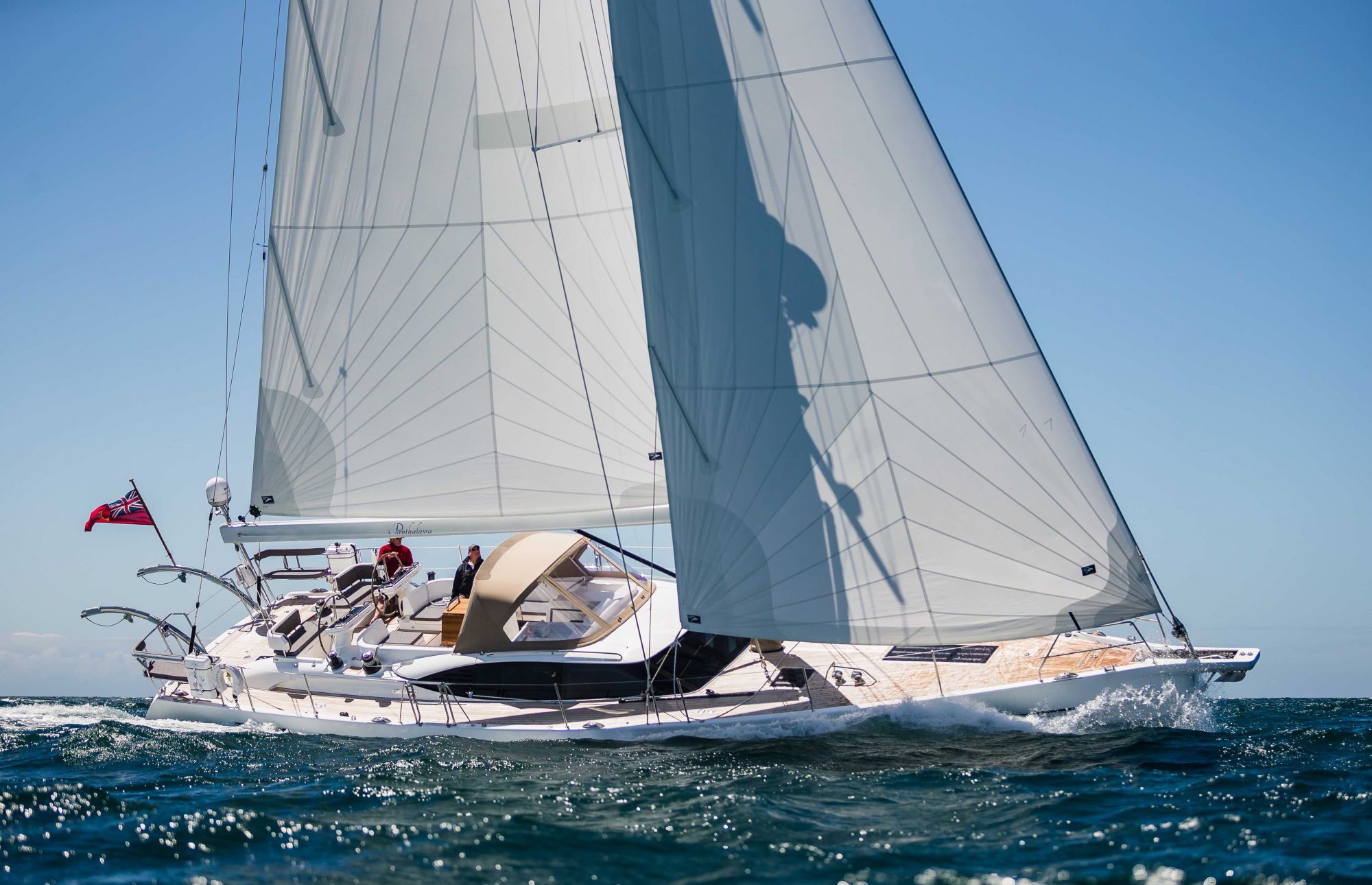 The 565 distills Oyster’s extensive bluewater pedigree into a new cruising experience that enables owners to go further and faster in luxury than ever before.

While the 565 has adopted a number of big-boat features, the knowledge transfer hasn’t been a one-way street. Far from it. The mid-50-foot range has long been a central part of Oyster’s work and success in this size bracket has influenced bigger boats in their range. One of the best examples is the Oyster 56, a model that proved to be a turning point for the company.

First launched in 1998, the Humphreys design marked a step change from a long line of Holman and Pye models. Aside from being a more modern-looking boat, the 56 had more powerful sections aft than her equivalent predecessors. Not only was she a quicker boat, she also had considerably more accommodation volume and more space on deck.

Over the course of 12 years, a total of 75 were built, making it clear that this size and design had hit the mark. So, when it came to her replacement in 2010, the 575 had big boots to fill. But once again, with 44 sold and launched, the new mid-50-footer proved to be another big hit.

All of which set the bar pretty high for the 565. With such clear success over two decades, producing a hat-trick was a bold and ambitious target. But just two years after her launch, 14 have been sold. The 565’s designer Rob Humphreys has incorporated the impressive common traits of its predecessors, configuring an attractive, slippery hull form with more volume, speed, luxury, practicality and stowage space.

“The 56 and 575s both made big contributions to Oyster and will always be considered landmark designs,” said Oyster’s Australian representative Michael Bell.

“But when it comes to the 565, features such as the twin rudders, the clean foredeck, sleek looks, a powerful yet manageable sail plan, her fixed prodder and bigger cockpit, these details highlight why this new model is another big step forward. In fact, I’d say this is the biggest change in any of our mid-50-foot models.”

Of course, you might have expected him to say this, but take the 565 out for a sail and it becomes clear why.

The twin-wheel helming position alone is a big change from the single system aboard the 56, allowing you to trim both the headsail and mainsail with control lines that are close to hand.

Upwind, the 105-percent overlapping headsail makes this far easier to manage shorthanded, while the fractional rigged sail plan contributes to the light and balanced feel on the helm. Downwind the fixed bowsprit provides good support for a range of efficient asymmetric sails and allows them to be gybed with ease.

In-mast furling comes as standard, which may come as a surprise to Oyster loyalists,
but it does enable one person to easily deploy and then furl the main without leaving the helm; a massive plus in shorthanded passage-making.

As you would expect given Oyster’s reputation for thoroughness, there is a failsafe: the sails can be manually furled in the event of a power or hydraulics failure. Both the mainsail and jib furlers have sockets that allow you to winch the sail by hand or, easier still, operate by cordless drill.

With an ample sail plan and more refined underwater lines, her light-weather performance is another step forward, as is her behaviour in stronger breezes. Surefooted, yet light on the helm, her beamy sections aft and the twin rudders play a big part in providing a powerful boat that is light and well-balanced on the helm.

Again, while there is little that is new in this configuration, it is the refinement of the complete system from the rudder blades, their sections and orientation – combined with a silky-smooth steering system – that contributes to the light, direct and balanced feel.

A number of keel configurations are available, including a standard 2.5-metre fin keel with a centreboard inside allowing shoal draft while maintaining upwind capabilities. 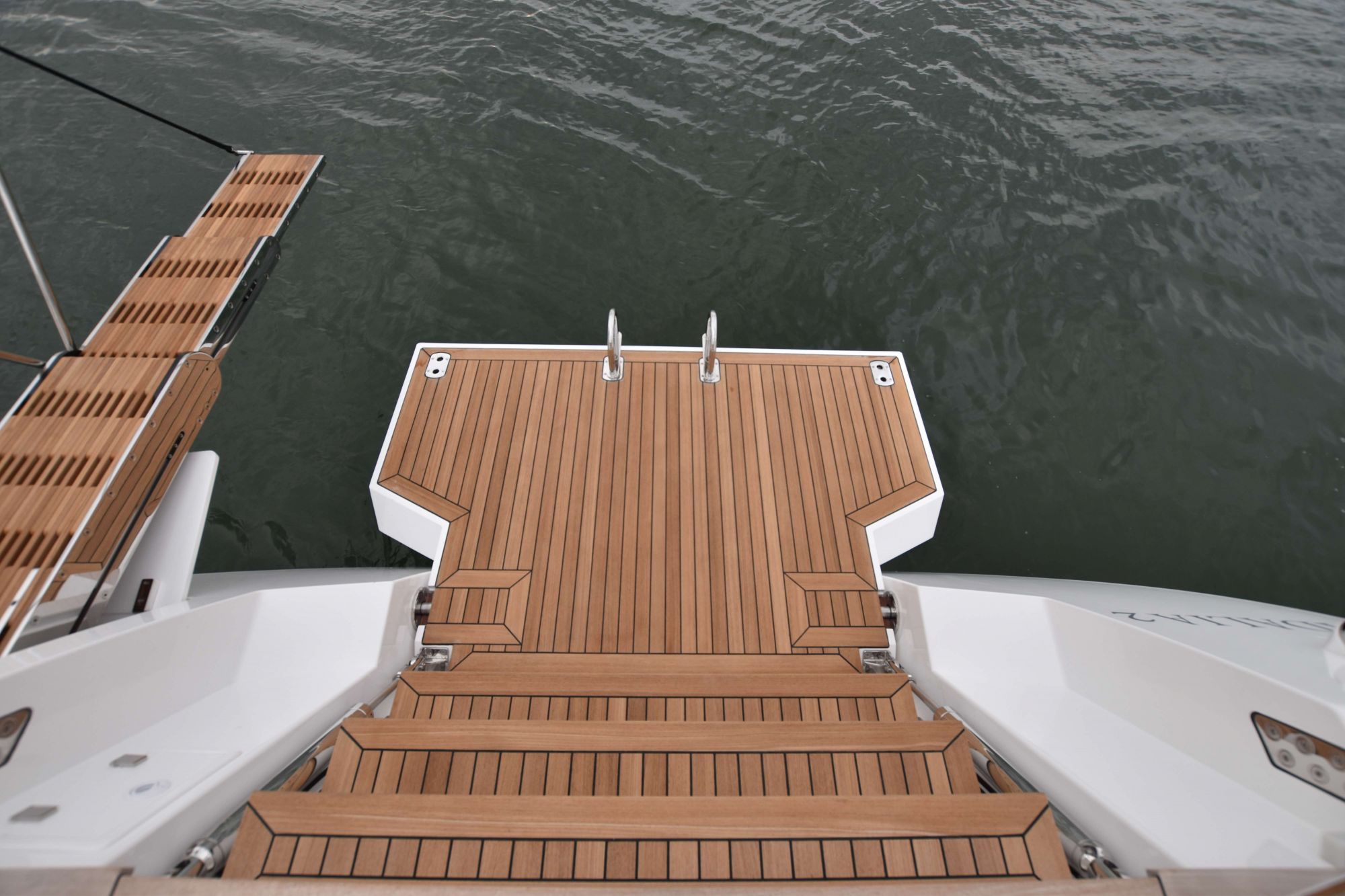 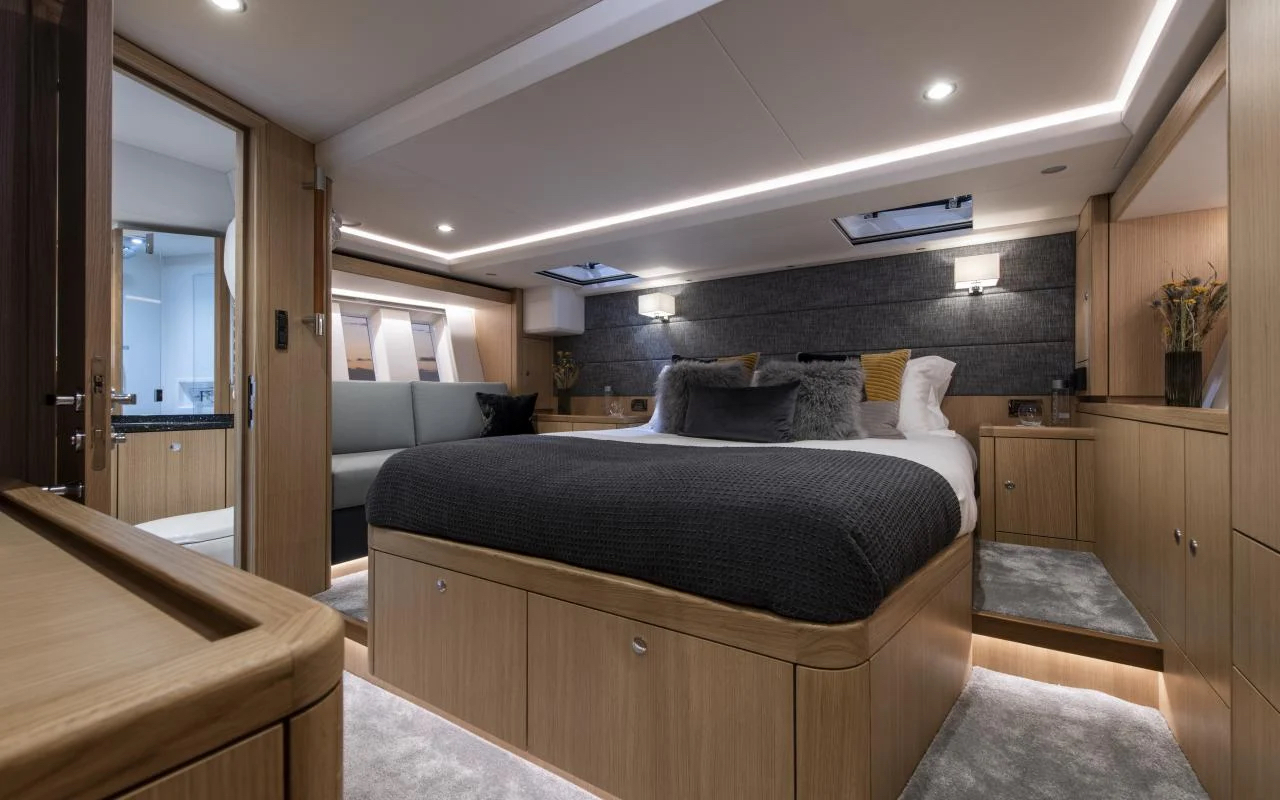 The owner’s stateroom aft enjoys ample headroom – a high level of craftsmanship and attention to the smallest details is apparent throughout. 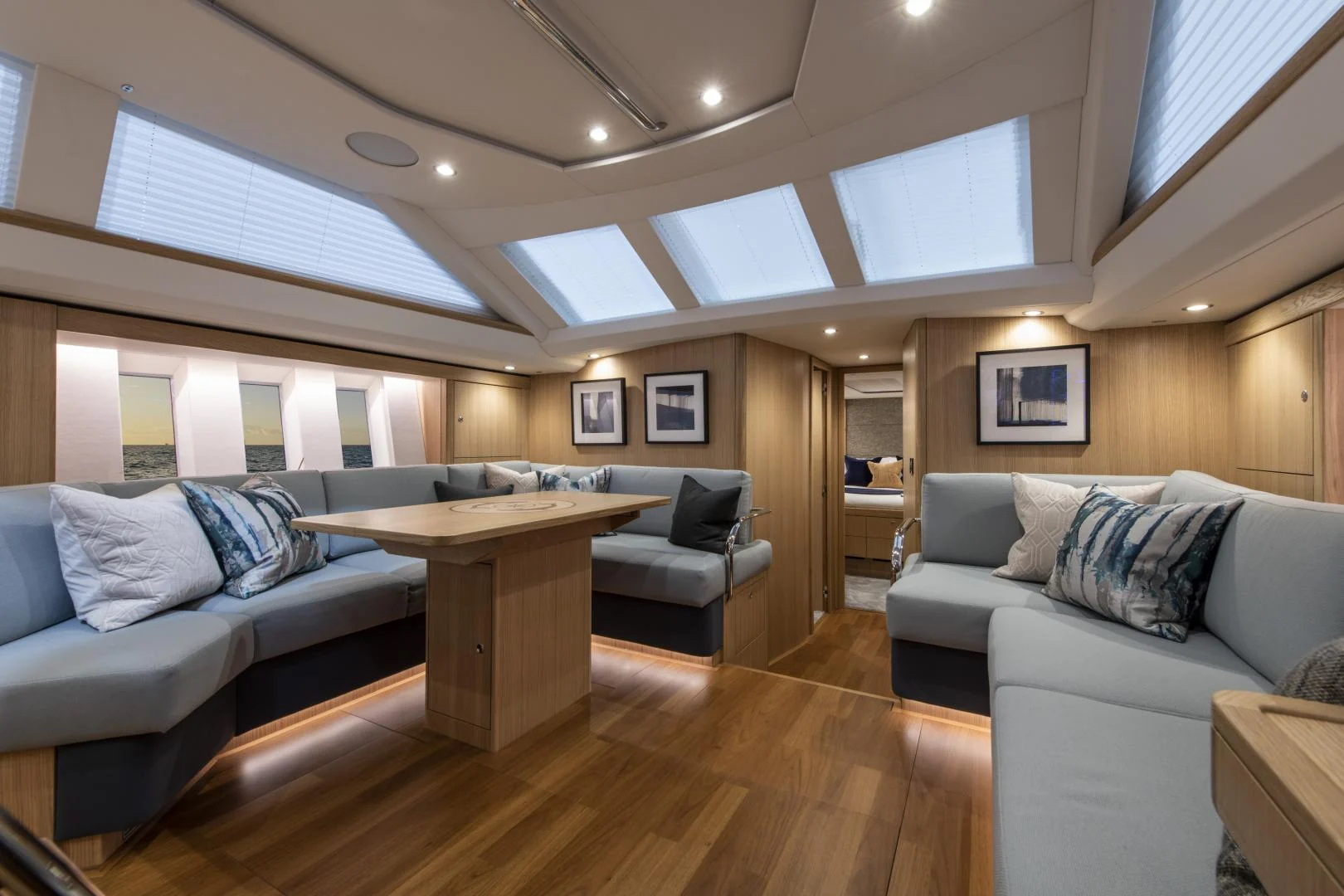 High ceilings in the saloon maintain the Oyster tradition while Seascape windows furnish an ever-changing view.

During our trials in the UK’s Solent aboard 565/02 Bruadarach, in just 10 knots of wind we were two-sail reaching at 8.2 knots. Downwind, her log sat at a steady 9 knots.

Later in the season, I sailed 565/01 Panthalassa at the 2019 Oyster regatta in Palma in the Balearic Islands, Spain. She delivered an impressive run of performances on the water against a fleet of 575s, regularly taking out line honours.

And while racing is not what she, or indeed any in the fleet, were primarily designed for, her performance was a perfect indication of how much of a step up this boat is and how she will eat up the miles.

Away from the race course and under engine, when berthing or manoeuvring in confined spaces, she continues to be a very easy boat to handle. The position of the twin wheels provides a far clearer view and are closer to hand to help with throwing or receiving a line.

When manoeuvring at close quarters, the lack of prop wash over the twin rudders would typically hamper handling, especially at slow speeds. But with a powerful, retractable bow and stern thrusters, she is exceptionally nimble at close quarters. From rotating around her keel to moving laterally onto the dock, there is little she can’t do in a tight fix. And while the use of thrusters might not gain the approval of the traditionalists, when you’ve used them in anger and nestled this 56-footer into a snug berth in a busy marina, it’s hard to argue against them.

For those familiar with the Oyster style, there are surprises in her overall layout and finish. Widely acclaimed for their high standard of joinery, the 565 continues the house style with a subtle and understated overall look. From the large, spacious saloon to the full navigation station on the starboard side, these are both further examples of well-proportioned and workable layouts. So too is the longitudinal galley on the port side, the double cabin forward and the twin cabin to port.

When it comes to the spacious master cabin aft, it’s easy to imagine that you’re aboard a far larger boat. One of the contributing factors here is the superb light and visibility afforded through the hull-mounted Seascape windows. While these longitudinally arranged hull portlights are not unique to the 565, they are new to this size in the range and make a huge difference down below, both here and in the main saloon.

Surefooted, yet light on the helm, her beamy sections aft and the twin rudders play a big part in providing a powerful boat that is light and well-balanced on the helm.

In the past, Oyster’s deck-saloon configuration – as opposed to other builders’ pilot-house style where the saloon sole is raised – has often been criticised for the cathedral-style feel below decks. The light streams in from above and the large windows don’t provide visibility when seated. The Seascape windows address both issues with ease, transforming the feeling below decks. Even in the forward cabin – where there are no Seascape windows – light floods in from the longitudinal skylight that runs down the centre of the deck.

Another significant improvement is the sea cabin/workshop/utility cabin that is sited on the port side aft of the nav station, pretty much amidships. This snug cabin is in the best part of the boat for a sea berth, is low down, close to both the nav station and the companionway hatch while also providing an area to carry out other tasks.

Again, while you might expect this aboard a larger boat, it’s impressive to see this on a 56-footer, especially as it appears to have been achieved without compromising other areas or services. There is also the option for an extended transom that opens up a large, full-width lazarette to store watersports gear and a dinghy.

Overall, this is every bit an Oyster Yacht. Beautifully built. Well-engineered. With the further refined looks of an already elegant house style. But the 565 also looks set to become a key model in the range, offering the ability to run her privately and sail her shorthanded. And, for those who prefer to operate with full- or part-time professional assistance, the accommodation and stowage capacity, along with an ingenious and clutter-free layout on deck, provides options at the other end of the scale.

Achieving all this in a mid-50-footer is impressive, but given the company’s track record, perhaps we shouldn’t be surprised.

Read the full review in Issue #93 of Ocean magazine.