R Marine recently led a flotilla of 34 Riviera yachts on an extended long weekend of fun and adventure to the natural wonders of Moreton Island.

With challenging access and a deluxe reputation, Riviera motor yacht owners jumped at the chance to join the veteran R Marine Jones crew for their annual Kooringal Experience.

At 6 am on 28 January, the fleet set off from the Gold Coast Broadwater led by Randall and Melinda Jones with their son Jack at the helm.

Tucked in the southwest tip of Moreton Island, Kooringal is a couple of hours from the Gold Coast, yet it may as well be another world away.

For those who dare navigate the half-mile between the end of the island’s buoyage system and safe anchorage, the rewards are plentiful: total serenity, abundant wildlife, a rustic beachside bar and freshly shucked oysters from the local farm.

For their first Experience event, Bret and Leasa Lashmar joined the flotilla in Moreton Bay at Peel Island, having cruised south from the Sunshine Coast on their recently acquired Riviera 395 SUV, Protector. 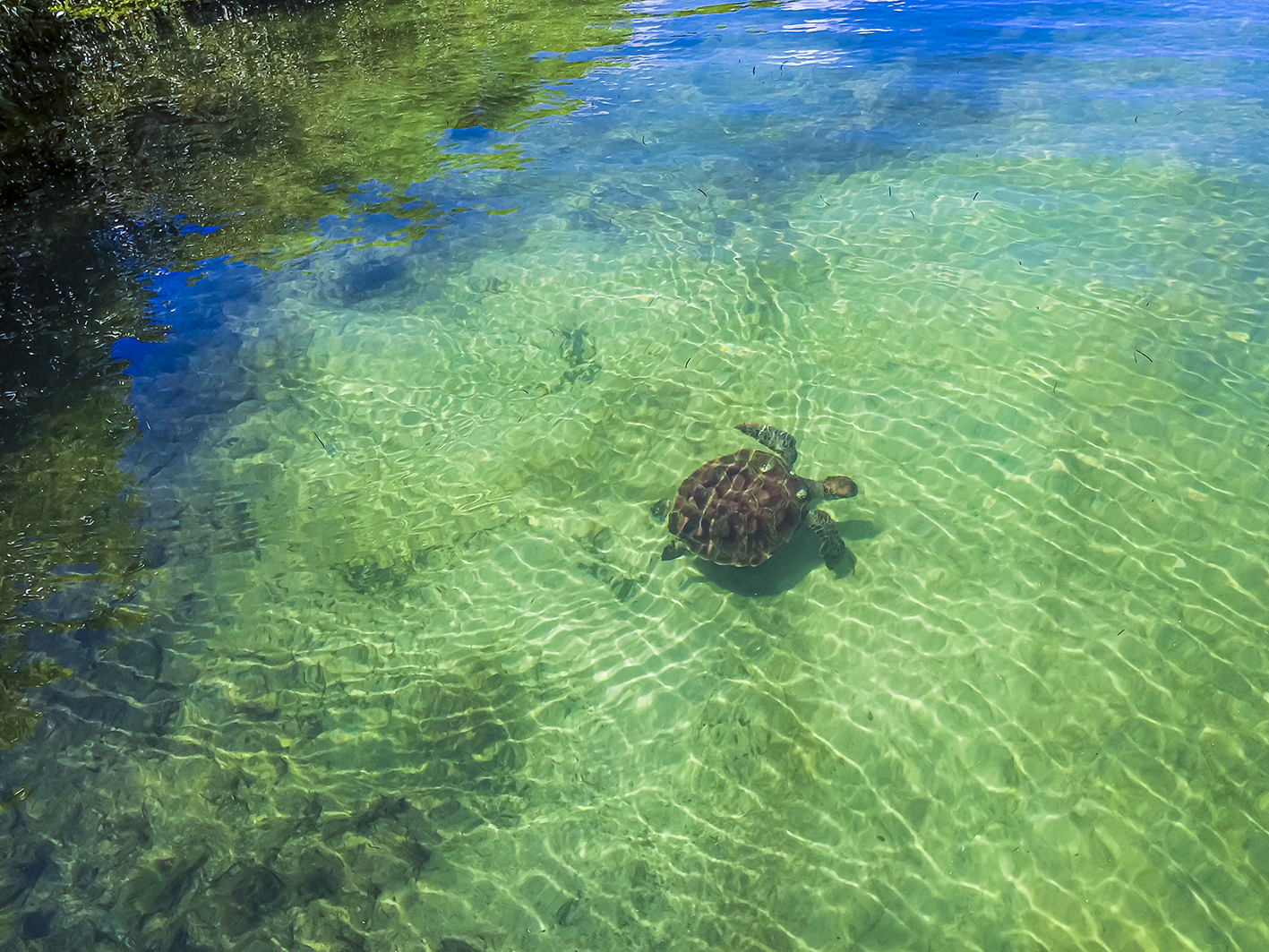 Getting close to the wildlife at Kooringal. 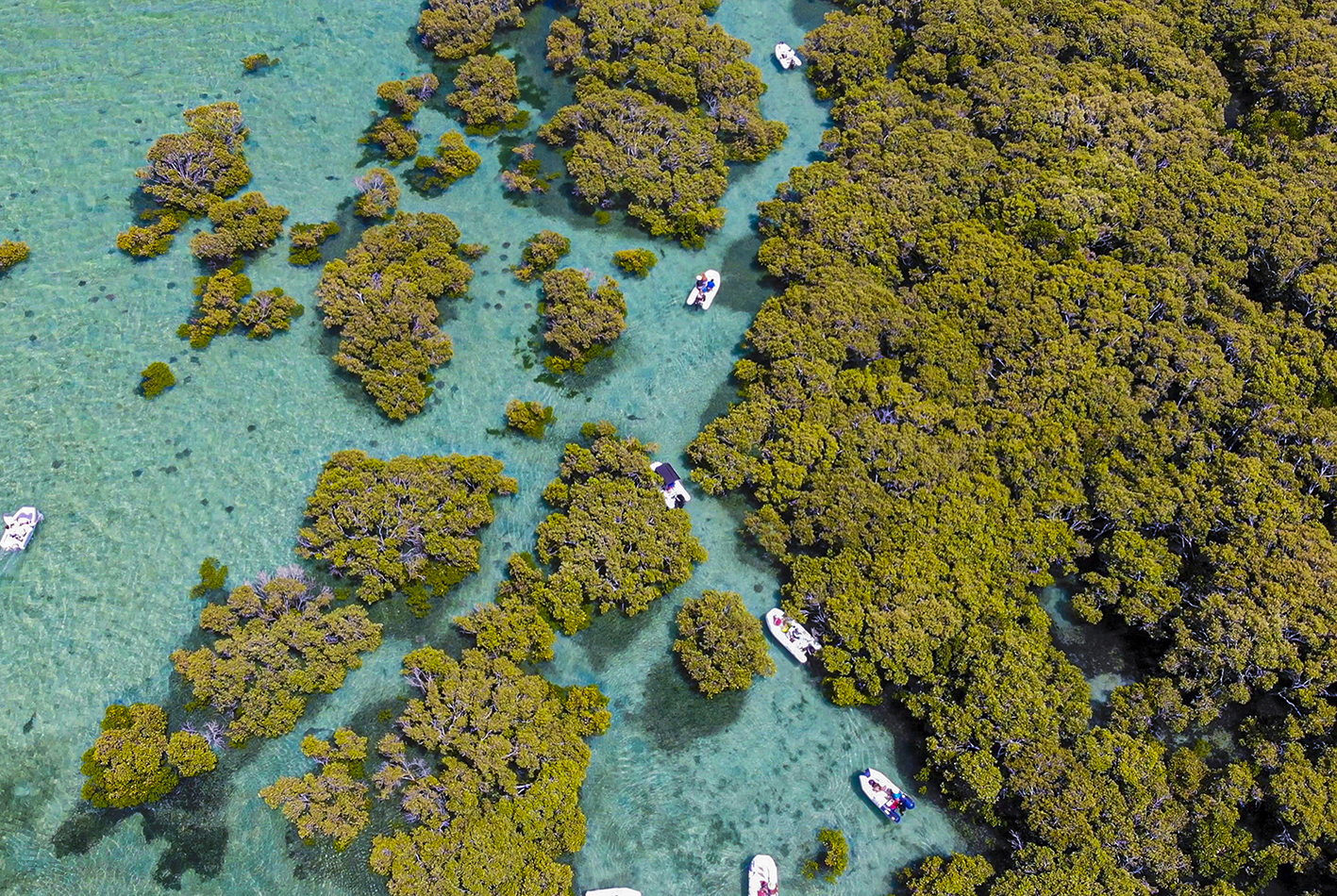 Venturing through crystal-clear waters, rich with mangroves and wildlife. 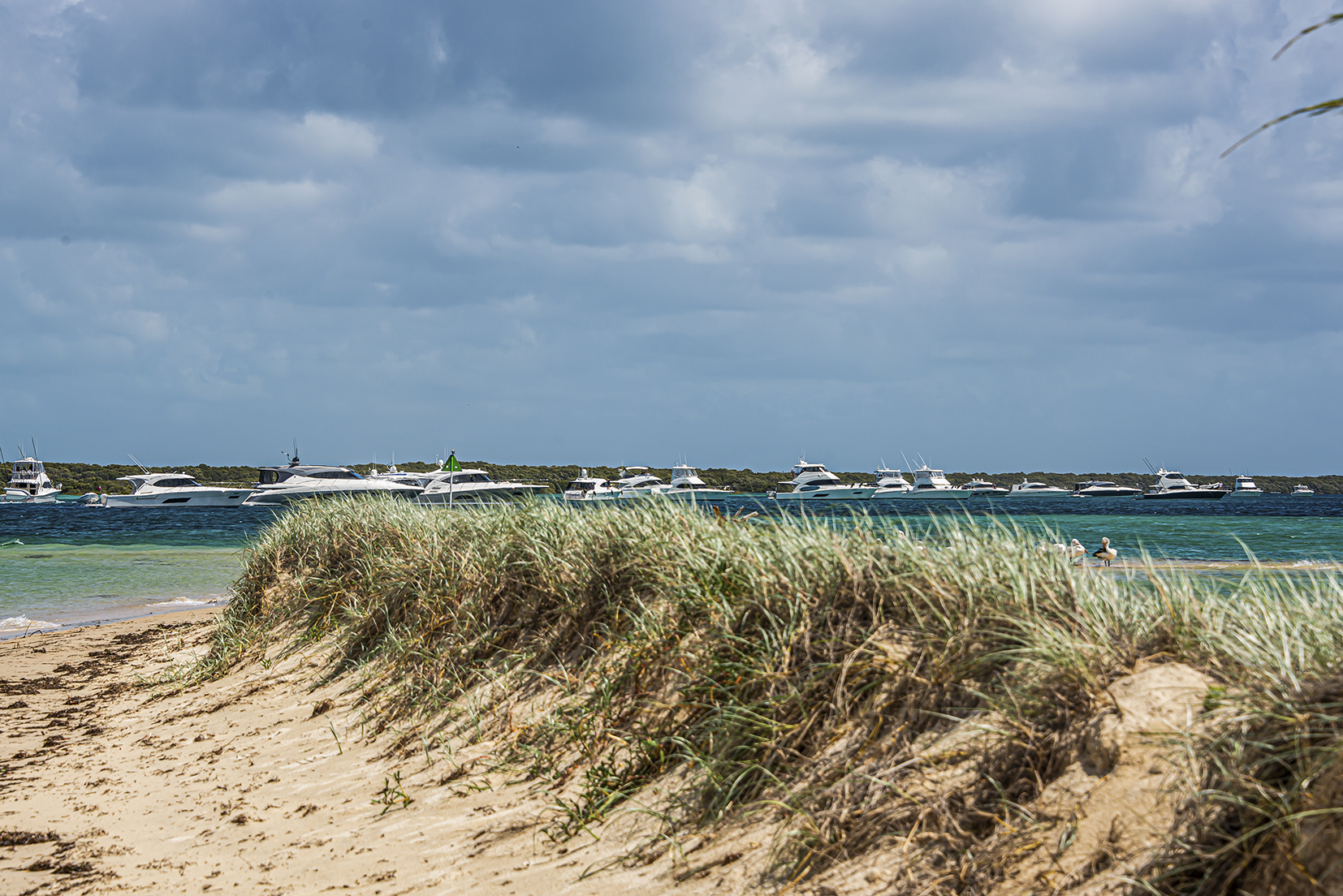 A boating haven for the Riviera family as they settled in at the safe anchorage off Kooringal at Moreton Island.

“Kooringal isn’t the easiest place to get into, which is part of its allure,” said Bret. “The trip with the team was great and we learned a lot, including some of the better anchoring techniques.”

By 10 am, all 34 Riviera luxury motor yachts had entered the passage on high tide, guided by markers laid out by the R Marine Jones team. While the arrival of over 100 Riviera adventurers more than tripled Kooringal’s resident population (45 in the 2016 census), the sheltered anchorage offered plenty of space for everyone.

“It was all well organised and the R Marine Jones team went above and beyond,” said Leasa.

“Even though it was superbly run it was also very laid back and relaxed; you could get involved in the activities as much or as little as you liked.”

“We met a lot of other owners that night at the Gutter Bar and the next day we joined a few other tenders and went exploring in the mangroves. There were stingrays, shovel-nose sharks and turtles; it was a really interesting experience.

“We explored on our own a lot as well, heading up another little inlet where we saw dolphins. The wildlife there is spectacular.”

Protector is the couple’s first Riviera, and they were impressed with the island-side Q&A session the team offered.

“The whole weekend was calm, the sun was out and it was just beautiful,” said Bret.

“It’s really exciting to have this amazing Riviera and after the weekend chatting with other owners, we have a few more places on the list where we can venture.”

Long-time Riviera owners Syd and Barb Yates joined the cruise from the Gold Coast on their 6000 Sport Yacht, Wall Street.

A sunny Saturday morning spent sitting on the sandbank savouring sweet Kooringal oysters and champagne was the Yates’ weekend highlight – a boating life that has changed a lot since their first little banana boat in the Pacific Islands decades ago.

“It was a magical weekend,” said Mrs Yates. “It’s so wonderful to find somewhere special like Kooringal with its crystal-clear water, mangroves, rays, sharks and turtles, and the Gutter Bar – now that’s a unique place!”

“We crossed the sandbar on the tender and arrived at the beach to wander down for drinks and dinner at the bar. On our way back along the beach, we realised the team had been a concierge service for us, shifting a long line of tenders further down the beach as the tide dropped – it was five-star service on a remote island.

“R Marine Jones is so well-organised and it makes it easy; all the stress is taken out so you can enjoy yourself from start to finish, and with Riviera owners, the camaraderie is really fabulous.”

Meeting old friends and making new ones is a focal point for the family-friendly Riviera Experiences. It’s a chance to learn and be inspired about new destinations, find new anchorages and swap stories, all in a relaxed environment.

“It was so enjoyable to play Finska on the beach of an afternoon, chatting away sharing drinks and nibbles,” said Mr Yates.

“Kooringal is an awesome place to visit. We’ve tried to get there a lot over the years but, in the end, this was only our second time there.

“You probably wouldn’t want to go alone unless you were really confident as it’s pretty tricky to get into, but the R Marine Jones crew were excellent.”

Having owned three different Riviera motor yachts over the span of a decade, the Yates are thrilled with their new 6000 Sport Yacht.

“I was at a boat show looking for a tender; we had a beautiful Belize Daybridge at the time,” said Mr Yates. “I ended up leaving the show with an order for a 6000 Sport Yacht.”

“Last year we spent three months in the Whitsundays with maybe only one night off the boat. It’s our holiday home; it’s all set up to just pick up and head off, it’s fantastic.” A mid-morning high tide on the Sunday marked the return to reality for most of the Riviera owners and friends. Randall Jones said he and his wife Melinda were delighted with the four days of boating.

“We love the water and catching up with our network of Riviera owners,” said Randall. “Some have been joining us for 20 years, and now more than ever we are seeing so many new families enjoy the boating lifestyle.”

“Queensland has so many boating destinations right at our doorstep and plenty more idyllic anchorages to explore. Enjoying our country is what we do, and we love it!”

“Exclusive events such as these provide a wonderful opportunity for Riviera motor yacht owners to meet and enjoy the great camaraderie that comes with being part of the Riviera family,” he said.

“It also gives Riviera owners greater confidence to make the most of every boating opportunity and in so doing, learn from the dealership team. That’s another part of the ultimate boating experience with Riviera.”