Stunning interior styling she may have, but the appeal of Pachoud Yachts’ latest Sportcat lies in her performance and efficiency on the water.

With her metallic Lamborghini Azurro Thetis paint job and sleek sedan styling, there is no doubt that F5 is a gorgeous looking vessel. Launched in December 2018, F5 is the fourth 18-metre Sportcat to leave Pachoud Yachts’ Tauranga manufacturing facility in New Zealand, and she marks Pachoud’s 56th custom build.

Constructed to New Zealand commercial survey standard, she has been put her to work with luxury charter company Cruise New Zealand, and one can’t help but think she will prove a very popular choice. The design’s appeal is easy to understand – offering superb indoor-outdoor flow and spacious one-level living, but with good separation for owners and guests, the vibe is like a swanky city apartment on the water. This is fitting considering F5 is usually berthed in Viaduct Harbour, overlooked by some of the most sought-after apartments and offices in Auckland.

The appeal, though, extends further, because F5 is a foiling catamaran capable of sustained high-speed cruising. Moreover, one of the many advantages of a catamaran design is the amount of deck area it affords, thanks to generous beam. Good design has maximised the available space aboard F5, not only at deck level but also below decks. 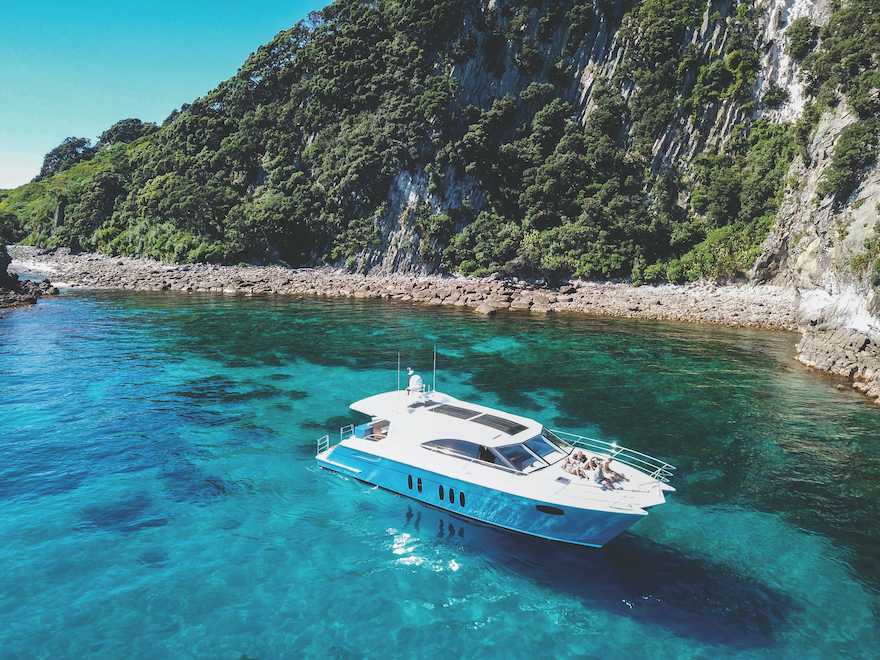 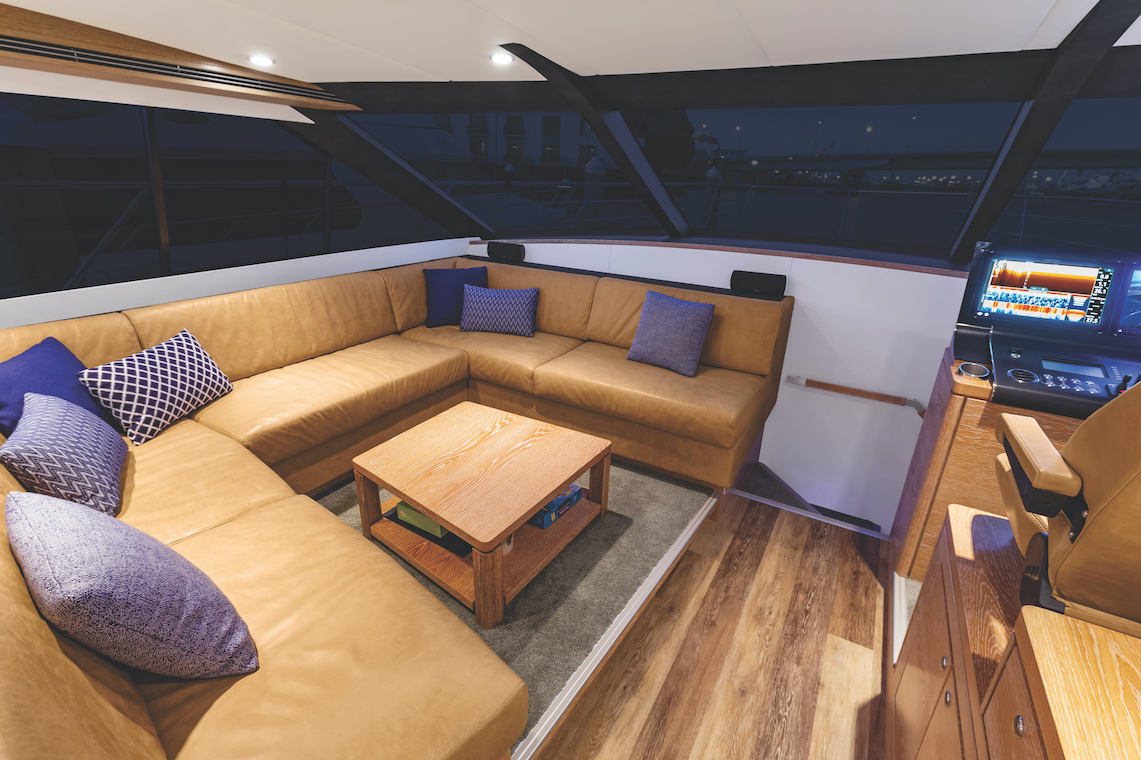 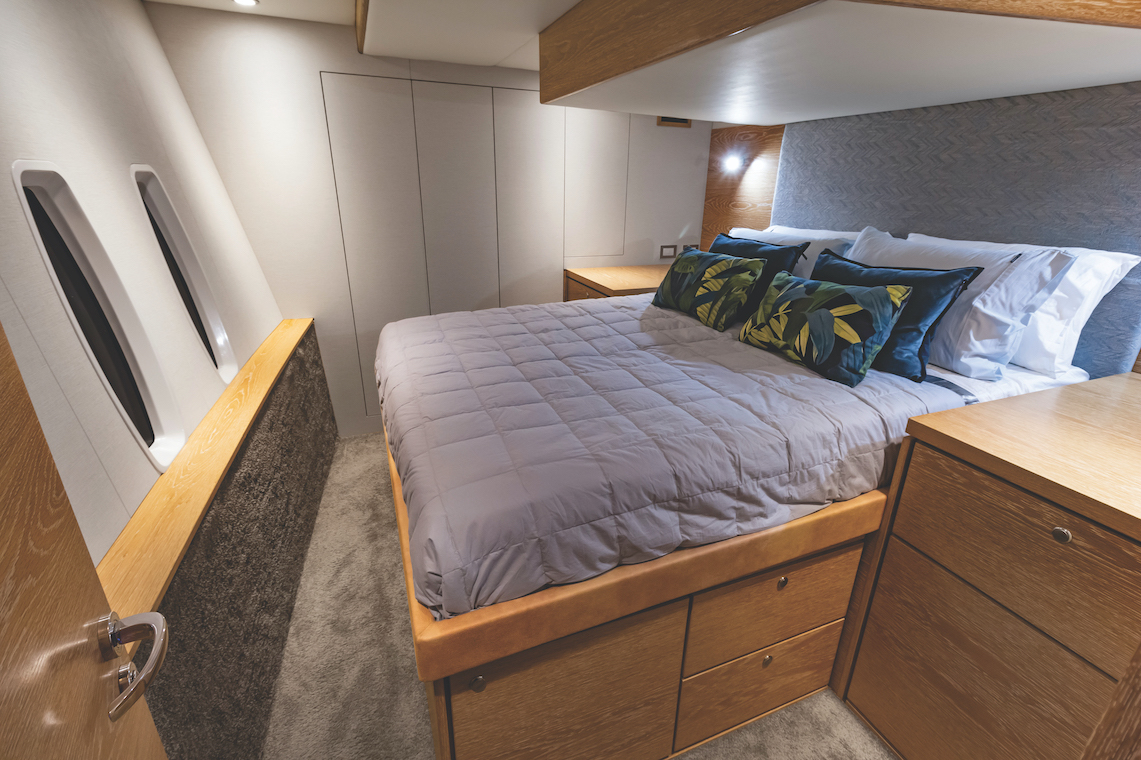 Pachoud Yachts has raised the cockpit and saloon soles to allow generous headroom in the cabins, which fit perfectly around the vessel’s wing deck. Picture windows for the master and guest cabins add further interest.

The upshot of raising the soles is taller topsides with improved freeboard and an excellent, commanding helm position well above water level – meaning superb forward visibility. The extra freeboard is welcome during offshore passages, says Dave Pachoud, who has been offshore in all three previous iterations of this design, which have all made voyages across the Tasman Sea or up to the Pacific islands.

“Each boat has been an evolution of the previous one,” he confirms, “with subtle improvements based on owner feedback and on new ideas from both designer Roger Hill and from us at Pachoud Yachts.”

The first cat of this design, Voodoo, was actually Pachoud’s own boat, and using it for several years informed some of those subtle changes to subsequent versions. A good example of this evolution is F5’s rear cockpit, which had straight seating in earlier versions but which is now curved. “It looks nicer,” Pachoud enthuses, “and it’s more social.”

Under the lounger, in a fire retardant-lined locker, is the vessel’s house bank of lithium batteries, with additional transom lockers either side for general storage. The lithium house bank takes care of the vessel’s electrical needs, via an inverter-charger, with a compact, high-efficiency, super-quiet generator firing up automatically whenever the bank needs topping up. Solar panels on the roof supplement F5’s charging capacity.

The hull construction is epoxy composite with a high-density plywood core, while the topsides and superstructure are foam cored to keep weight down. E-glass and carbon fibre is used extensively in the foam core bulkheads and beams and other high stress areas, which were structurally engineered by Nina Heatley at Clever Fox Projects for Plan Approval by Maritime NZ – for a foiling powercat, the engineering had to be first class.

Stepping aboard F5 via the wide, teak-covered swimming platform, I was immediately struck by the space – the platform is vast.

At the touch of a button it drops down to 500mm below water level to facilitate deployment of the 3.5-metre OC Tender sailing dinghy from the large garage, which features an electrically operated door.

The aft platform is a real activity centre with a full-width bench across the transom featuring a deep sink, a large live bait well, a 15 kilo per hour salt- and freshwater ice maker, a bait freezer, drinks fridge, and a networked Simrad multifunction display (MFD). The ice maker feeds directly into one of two large insulated bins set into the platform via a chute, and the Simrad MFD also provides C-Zone functionality control from the swimming platform.

If the swimming platform is an activity centre, then the main aft deck is the vessel’s social hub – as the large dining table and numerous drinks fridges attest. Enclosed by clears that retract into the ceiling, it is sheltered from the elements but maintains a wonderful open-air feel and excellent connection to the swimming platform, galley and saloon. The aft deck day head offers perfect convenience, eliminating the need to go below.

Inside, the city apartment analogy is neatly illustrated by the open plan saloon with its attractive bleached and dark oak cabinetry, laminated floors, and designer galley that opens directly onto the aft deck via sliding cavity windows.

The saloon itself is naturally divided into two distinct entertaining areas by companionways leading to the accommodation below. On the starboard side aft is an L-shaped seating area with a freestanding coffee table, and the extra-wide lounge makes a good back-up or occasional berth. Forward of the companionways to port is a large U-shaped lounge on a raised platform, and all the seating in the saloon features sprung bases and leather upholstery. A flatscreen television pops up under the front window and two Golden Ears Hi-Fi systems – one of them dedicated to the television – take care of the sounds.

The saloon’s large side windows slide open to let in light and air, while LED ceiling lights and clever concealed lighting banish the darkness when night falls.

The galley features Corian countertops and a full complement of in-built domestic appliances, including two under-bench convection ovens, an induction cooktop with in-bench extractor, a dishwasher, and a domestic fridge-freezer. Moreover, the storage provision for cooking and eating utensils, glassware and the like would put many apartment kitchens to shame. 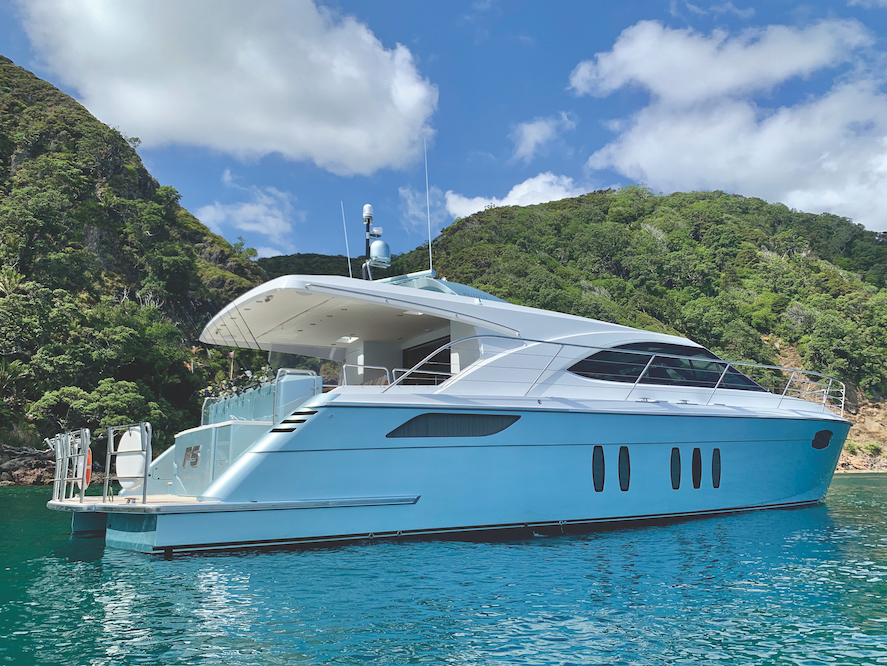 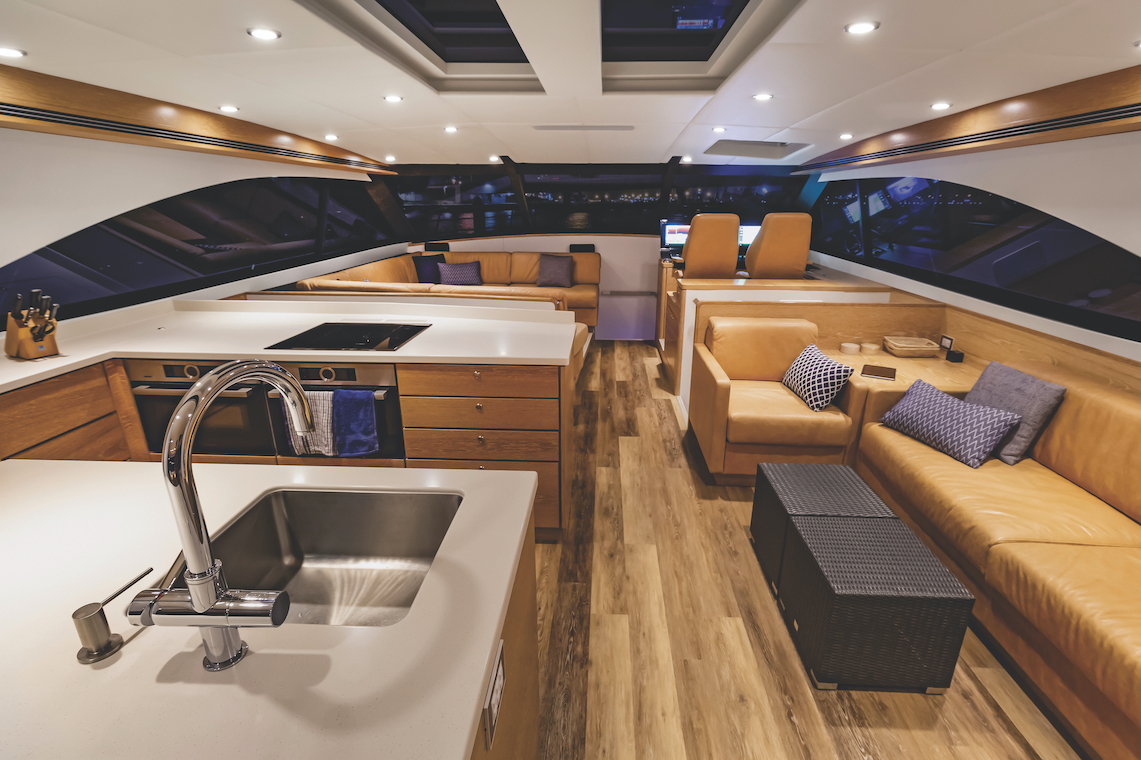 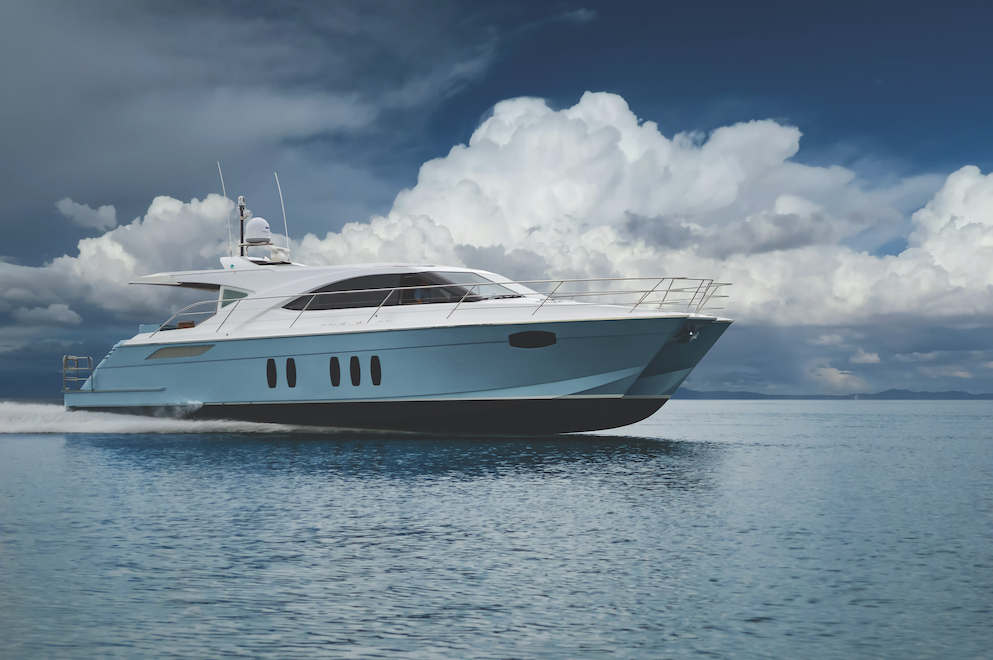 Below decks, F5 is divided into a spacious full-beam master suite that straddles the wing deck and occupies the forward sections of both hulls. There are also three generous guest cabins. With three access points for four cabins, this layout offers great separation for more comfortable cruising.

Access to the master is via companionway stairs forward of the helm, and the landing accommodates a washer-dryer. The master cabin’s king-size berth athwartships has views out through the picture window on the starboard side and there’s also a long, narrow window across the front, and a pop-up television. The exclusive ensuite bathroom, which you step down into, features a supersized shower, large vanity and the luxury of space.

Aft of the master cabin in the starboard hull, two guest cabins each offer bunks and plenty of storage, and in the aft cabin the beds convert to a generous double berth. Both of these cabins are served by a good-sized shared bathroom over in the port hull, which also has a large guest cabin with a queen-size berth. This cabin enjoys views from the walkaround bed through the feature windows on the port side. All the cabins have individually controlled air-conditioning.

Its stunning interior aside, it’s the asymmetrical planing hulls and hydrofoil assistance that set this powercat apart. Both contribute to the vessel’s amazing performance and excellent fuel economy.

F5 is an accomplished long-range cruiser, but Hill hasn’t specified huge fuel tanks to achieve range. Instead, he has designed the boat around a hydrofoil originally developed by LOMOcean for Voodoo, but since modified and refined by Pachoud’s research and development team.

The foil spans between the lower chines of the asymmetric planing hulls, which have also been further refined since Voodoo.

The combination of foil and hulls allows the 18-metre vessel to travel at 30 knots non-stop between Auckland and Fiji with a typical passage time of 35 to 40 hours.

Performance really is impressive. A pair of 825hp MTU 60 Series engines provide the impetus via V-drives, lifting F5 swiftly but almost imperceptibly onto the plane, to foil at 18 knots. The transition to foiling is seamless, and once up, the vessel will stay on the foil down to 12 knots. Zipwake interceptors automatically adjust trim.

On the foils, the ride is eerily smooth and there is no penalty for speed: fuel consumption is seven litres per nautical mile whether F5 is travelling at 20 knots or 35 knots. And unlike most catamarans, F5 banks into turns rather than leaning out.

Sitting in one of the two comfortable leather helm seats, I noticed there’s no wheel. It seemed strange at first, but controlling the vessel is easy. Steering is via Simrad autopilot or one of two small toggle switches/joysticks, and there’s also a remote control that plugs in at either the helm or the transom. With the remote, a bowthruster, and F5’s wide-set propellers, berthing is easy enough.

Three 16-inch Simrad MFDs, displaying a full range of engine and navigation data as well as video from the bow and engine room cameras, fill most of the carbon-look fascia. The attractive helm station has everything within easy reach, whether standing up or sitting down to drive.

We took F5 for a short run around the inner Hauraki Gulf, cruising effortlessly at 30 knots while sitting at 1,900rpm. A full-throttle burst produced 37 knots, but engine and hull noise remained minimal and the wake stayed flat. From the helm there was no real impression of speed until boats on the horizon suddenly leapt into view, but fortunately visibility from the helm is excellent.

This sparkling performance will be put to good use in F5 – during the New Zealand winter she will spend time in the Pacific islands of New Caledonia, Fiji and Tonga, which are easily within range thanks to the design’s speed and fuel efficiency.

F5 is an impressive vessel at every level, from build quality, performance and range to spaciousness, versatility, specification and comfort. It is no surprise, therefore, that Pachoud Yachts is currently gearing up to produce many more foiling power cats to this design, with delivery times expected to be between 12 and 18 months. Indeed, the builder already has orders for another three near-identical 18-metre Sportcats, one of which is already in build. It seems that popularity is growing already.

for the full story you can view the magazine online for free here.

Show must go on

Show must go on