Electric boats with a difference will soon cruise the waters of New Zealand through a partnership with Next Generation Boats and Swedish boatbuilder Candela.

Stockholm-based Candela has expanded its international presence, partnering with Next Generation Boats based in Wanaka on New Zealand’s South Island. The first Candela C-7 speedboat arrived in April this year and will be followed by the bigger C-8 at the end of 2022.

New Zealand has one of the highest levels of recreational boating activity per capita in the world. This doesn’t always mix well with the country’s pristine marine habitats due to increasing negative impacts from emissions, wake and noise pollution from conventional engines in power boats.

The problem was that no electric motorboat has been able to offer the elusive combination of high speed and long range that boaties are used to in their ICE craft. Boat hulls are heavy and need huge amounts of energy at high speeds, so even the best lithium-ion batteries get drained after a very short period of spirited driving.

Candela gained worldwide fame for cracking the code on long-range electric craft. Flying on computer-stabilised underwater wings (hydrofoils), Candela’s day cruiser, the Candela C-8 and sportsboat Candela C-7 use only a fraction of the energy conventional motorboats need at speeds of 30 knots. 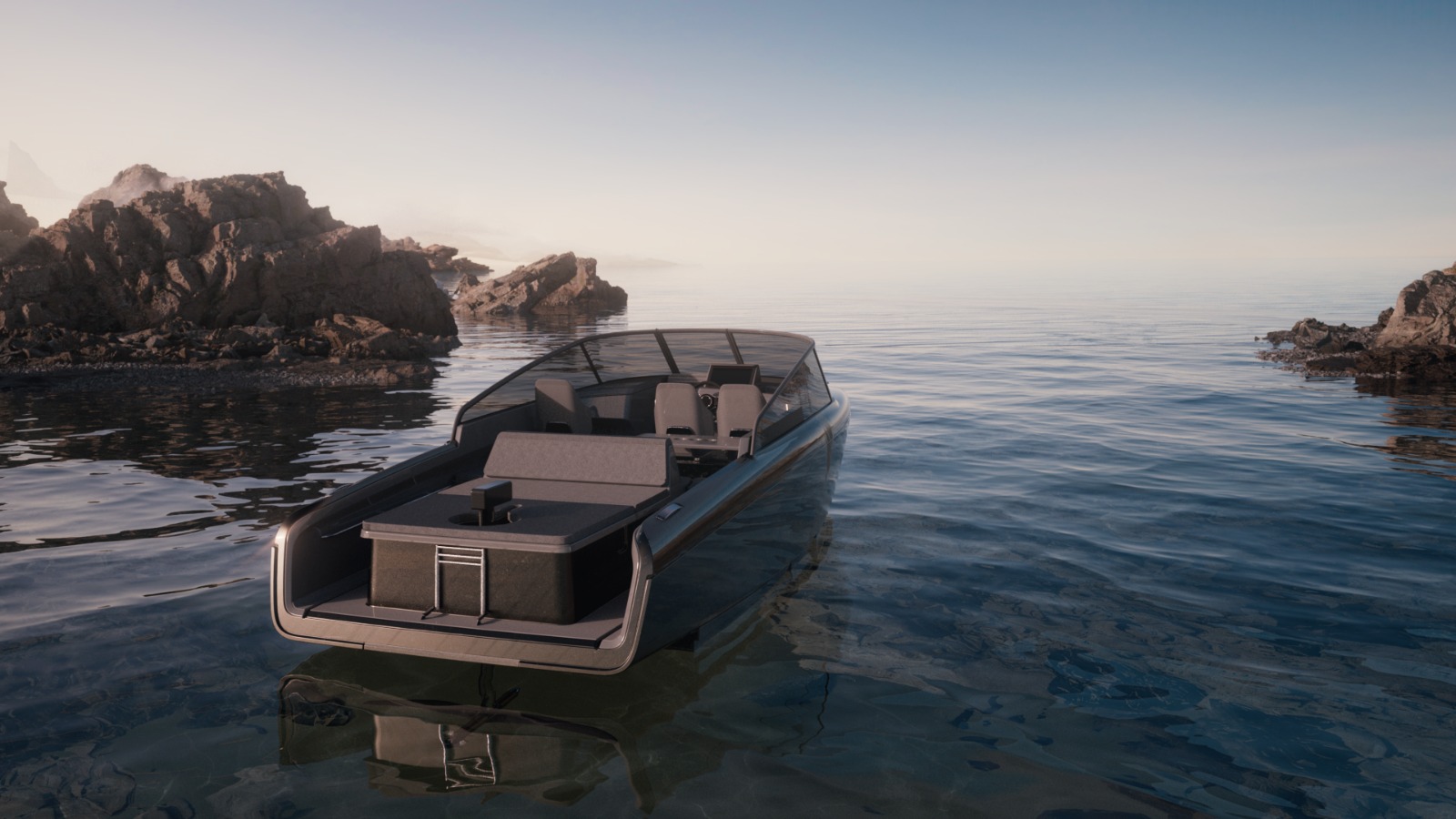 Each boat can be customised to suit its owner's needs and applications. 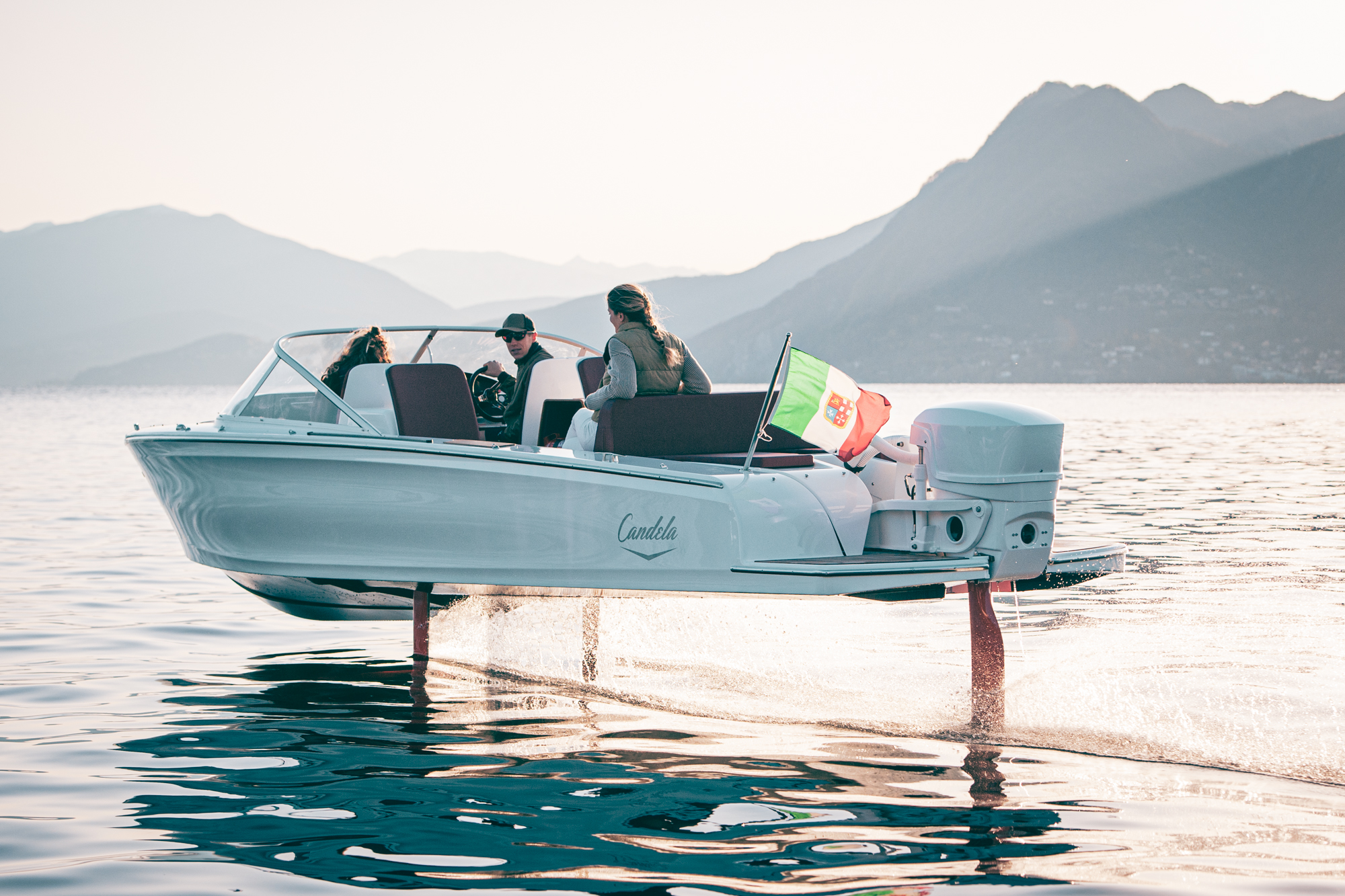 Once foilborne, Candela’s boats can travel for two to two and a half hours at a speed of 20 knots and cover 50 nautical miles. 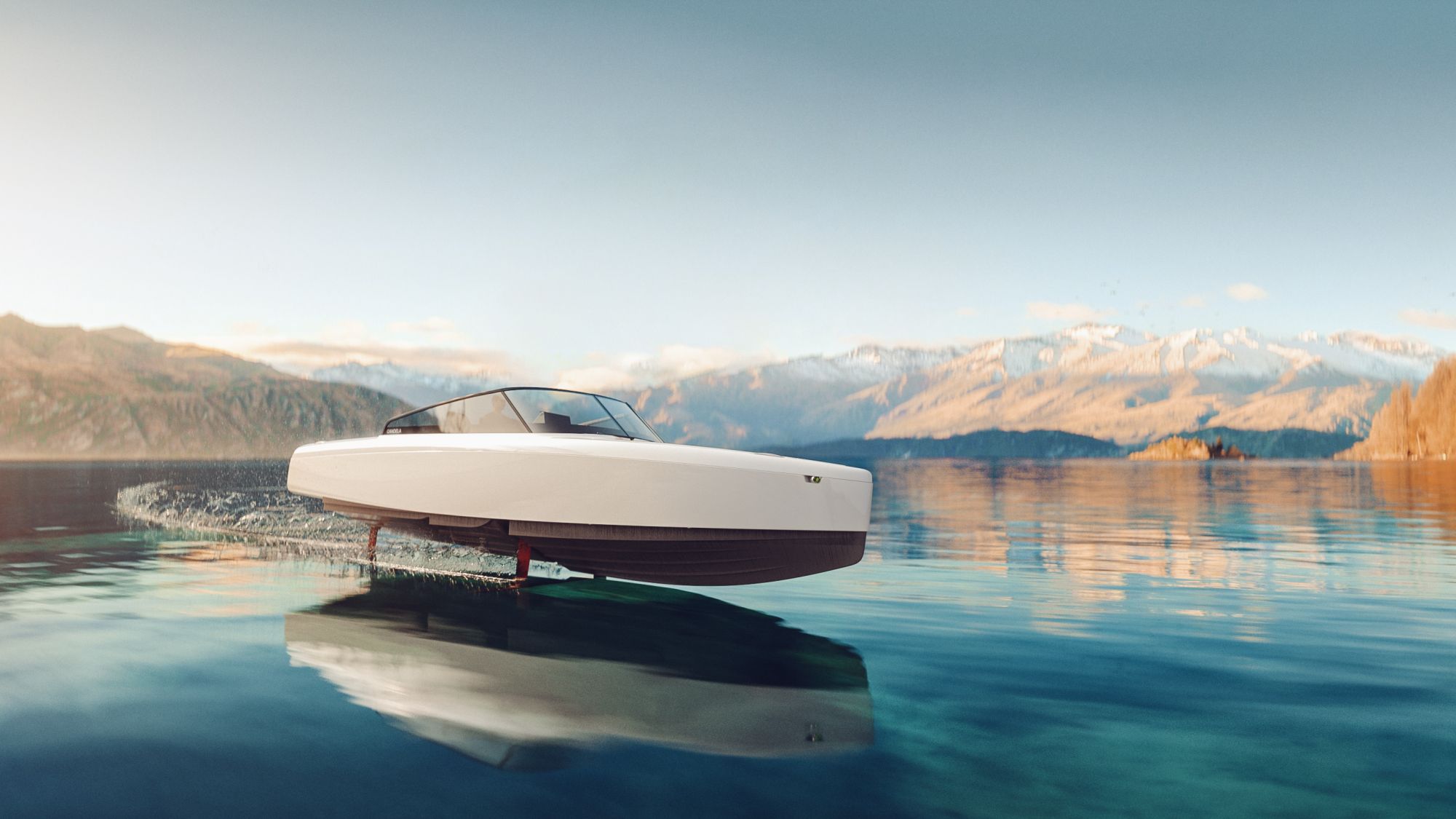 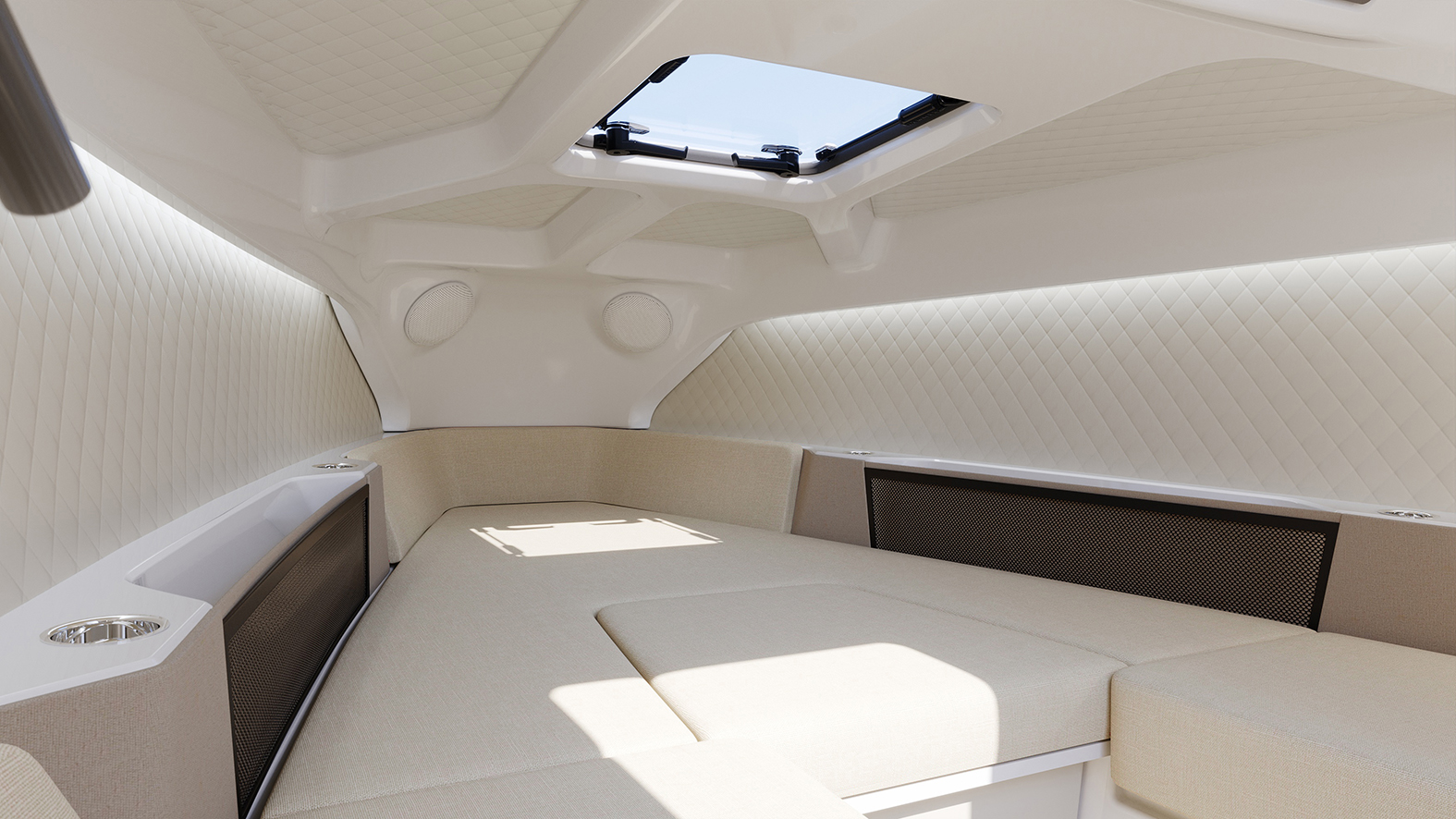 Inside, there's accommodation, water closet and various options available for layout and accessories.

The vessels store no fuel on board, just batteries. There is a 42 kWh lithium (Li-NMC) battery that provides energy for propulsion. There are no backups on board except for 5 miles of reserve range at slow speed once the battery is down to zero percent.

Once foil-borne, Candela’s boats can travel for two to two and a half hours at a speed of 20 knots and cover 50 nautical miles. The active hydrofoil system allows the boat to fly over waves without causing discomfort to passengers. The onboard computer automatically adjusts pitch, roll and height to account for side winds, waves and people moving around.

In addition to record-setting range and performance, Candela’s boats use 80 percent less energy than conventional boats, which translates not only into longer range but also to an almost non-existent wake behind the boat.

At 25 knots, a Candela craft creates a tiny 5-centimetre wave and therefore causes minimal disturbance to shorelines and marine habitats.

The Candela C-Pod submerged pod drive is whisper quiet, even at cruising speeds of 20 to 25 knots.

Two ultra-compact yet strong permanent magnet motors underwater provide 50 kW of power and directly drive counter-rotating propellers without the need for any transmission in between to achieve speeds of 30 knots in absolute silence. Electric direct-drive means no noise from gears, no oil changes and no maintenance.

The C-POD drive unit can run for 3,000 hours without service, compared to many outboard motors with internal combustion engines that require maintenance intervals of 100 hours.

The highly reduced maintenance schedule is ideal for operators in remote locations where technicians are hard to come by.

When moored, the hydrofoils retract into a hull recess above the waterline to prevent marine growth. The P-8 Voyager is also fully connected and able to take advantage of over-the-air (OTA) updates, enabling Candela’s 24/7 service department to perform remote troubleshooting.

“Electric boats are ideal for the New Zealand market,” said Kostya Marchenko, founder and CEO of Next Generation Boats.

“More than 80 percent of our electricity generation comes from renewable sources and there are many pristine lakes, harbours and estuaries to be enjoyed aboard an eco-friendly, low-impact boat.

“With 50 nautical miles of range, you can easily do a lap around Waiheke Island in the Hauraki Gulf and explore its many fine vineyards and beautiful sandy beaches. At 22 knots of cruising speed, you will get there faster and in more comfort than on a ferry.

“In fact, with such an amazing range you can easily cover most spots in the Bay of Islands, go from Queenstown to Glenorchy and back or travel the whole length of Lake Wanaka, twice. With Candela boats, range anxiety is a thing of the past.” 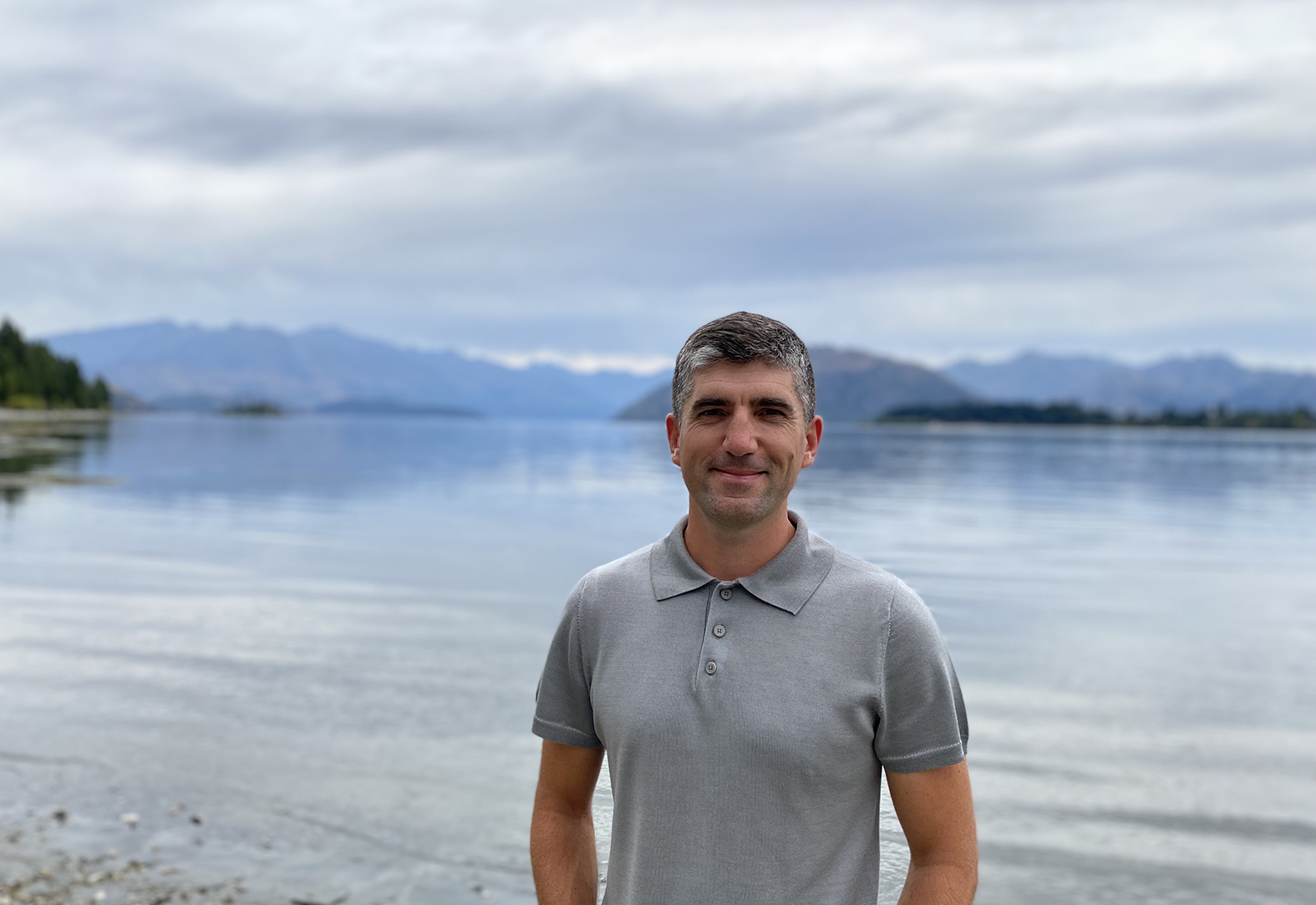 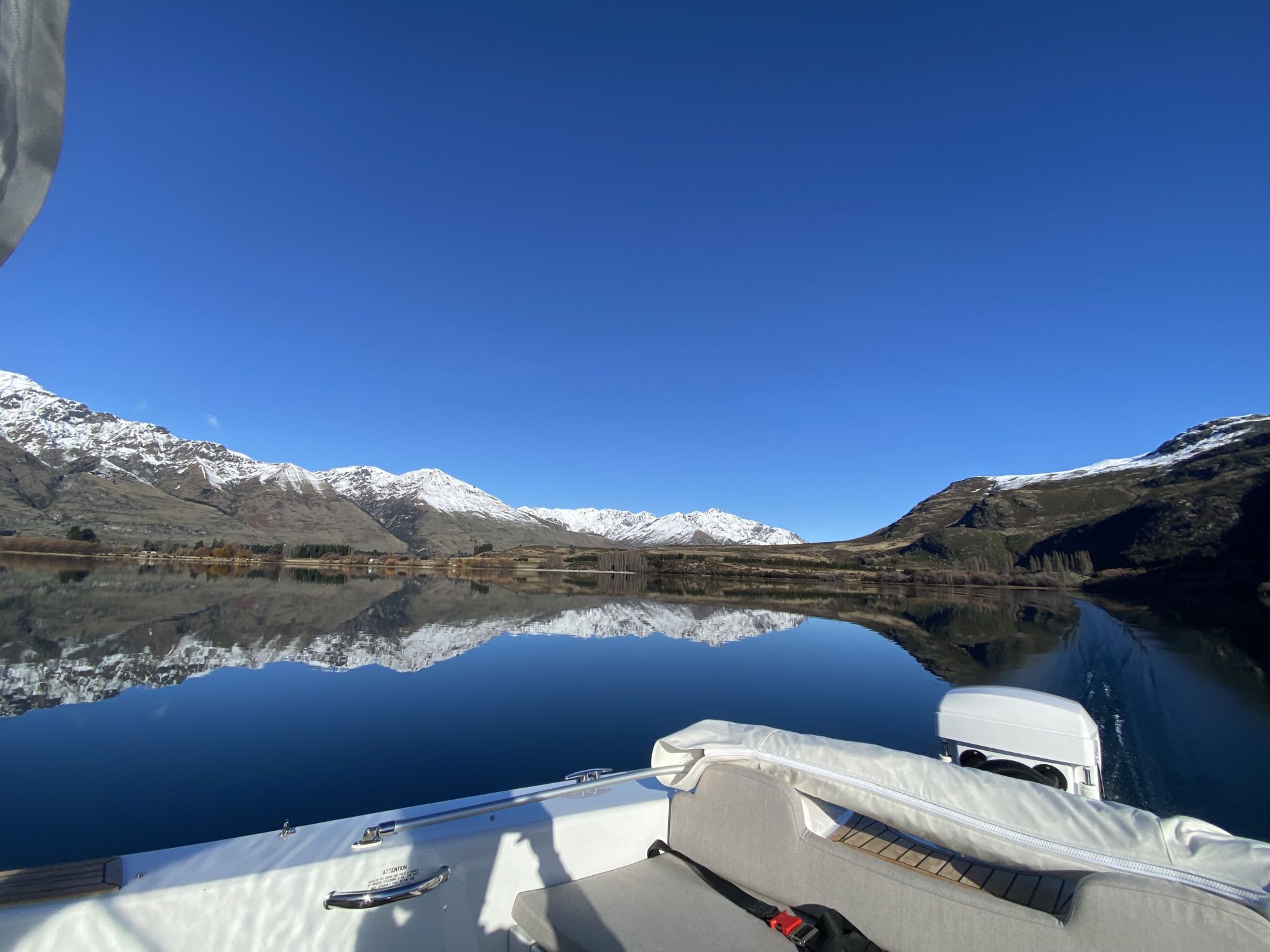 With Candela, you can easily cover most spots in the Bay of Islands, or go from Queenstown to Glenorchy and back.

Marchenko first came across Candela in 2019 when he was researching options for putting electric propulsion on his sailboat.

“I was living on board with my family,” he explained. “My wife and two kids and I spent five years sailing around Australia, New Zealand, Fiji, Tonga and New Caledonia. I was very intrigued by the Candela’s decision to go with hydrofoils.

“As I’ve learned more about electric propulsion and the current state of battery technology it all made perfect sense – there’s no way to make an electric boat that would be as good or better than conventional alternatives unless you make it hydrofoiling. Battery tech is just not there yet.

“A few years later I got into wing foiling as a water-based hobby and immediately got hooked on foiling – it’s an incredible feeling to be flying above the water surface so effortlessly and smoothly.

“We were moving off the boat and settling on land in Wanaka on the South Island of New Zealand and that’s when I decided to get in touch with Candela and set up a partnership, all with an aim of accelerating adoption of electric boats in New Zealand.

“There have been electric boats before Candela, but none of them were even close when it comes to range or speed,” said Marchenko.

“Candela has finally done that while also offering a much more pleasant riding experience – quiet and smooth, flying above the waves instead of smashing into them.

In Europe, the Candela C-8 has become the best-selling electric craft, with over 100 orders for the €300,000 (NZD $520,000), all-carbon fibre day cruiser since its launch in 2021. The C-8 has been hailed as the boat industry’s iPhone moment and is often compared to Tesla cars.

Although Candela’s craft are the world’s first electric hydrofoil boats, foiling is not new to New Zealand’s boaters. The AC72 catamarans and AC75 monohulls of America’s Cup Teams have been flying for a number of years, all while a variety of foiling watersports such as kite/wing/wind foiling are rapidly growing in popularity.

“Electric vehicles are becoming a common sight on New Zealand roads, now it’s time to tackle the waterways and speed up the decarbonisation of the marine sector,” said Marchenko.

“New Zealand is at the forefront of sustainability in so many ways – one-third of the land area is protected in parks and reserves,” said Gustav Hasselskog, founder and CEO of Candela.

“Kiwi conservation workers are at the forefront of species management. Renewables account for much of the energy generation. So, it feels great that Candela can contribute to the great work New Zealand is doing to keep its pristine waters clean.”

Next Generation Boats plans to have two demo boats for sea trials, most likely one boat on the North Island and one boat on the South Island. Marchenko believes there is great potential, especially in the tourism sector.

Turnaround time from order to delivery is approximately 18 months, depending on custom features, which span two exterior colour schemes (light and dark) and two interior finish options (desert sand and Nordic mist), boat configurations such as open top, T-top and hard top to suit various environmental conditions and add-ons such as fridge, toilet, shower and trailer.

“Each boat is configured and customised to suit the customer’s preferences and each will be built on demand,” he said.

According to Marchenko, the focus will be on demonstrations, as it’s close to impossible to explain the sensation of cruising on a Candela boat.

“There’s a number of target groups – early adopters (these are often successful tech entrepreneurs interested in new tech), those who made the switch to an electric vehicle and looking to further electrify their transport and recreation, people that highly value comfort (often a person likes boating but family members are prone to sea sickness or don’t like the wet jarring ride of conventional boat),” he said.

“Queenstown and Wanaka are popular destinations for Aussies in winter so I’m hoping to see a number of them coming for demo rides after skiing and snowboarding. Winter here is fantastic for boating with mostly calm sunny days.”