Your first hint that Audace is not your typical long-range cruiser comes in the form of a big red crane on her aft deck. And we do mean big: It has a nine-ton capacity, to hoist the 10-metre custom main tender. Few yacht owners want such hefty gear visible to passers-by, much less painted in such a decisive (dare we say defiant?) fashion.

However, Andrea Merloni – the owner of Audace – is not like most owners. From living aboard his yacht practically all year round to venturing far from his homeport in the Mediterranean – additionally toting special land vehicles for onshore explorations – Merloni may be in a category of his own.

It’s no surprise therefore that his set of must-haves when he went yacht shopping several years ago matched a limited number of builders. On the advice of his representative, he turned to Cantiere delle Marche, with a singular focus on rugged, real explorers. Not only did he get the yacht he wanted, but Cantiere delle Marche got the chance to prove its mettle in custom construction.

“A one-off project was a challenge we were ready to face,” explains Ennio Cecchini, the shipyard’s co-founder and CEO. 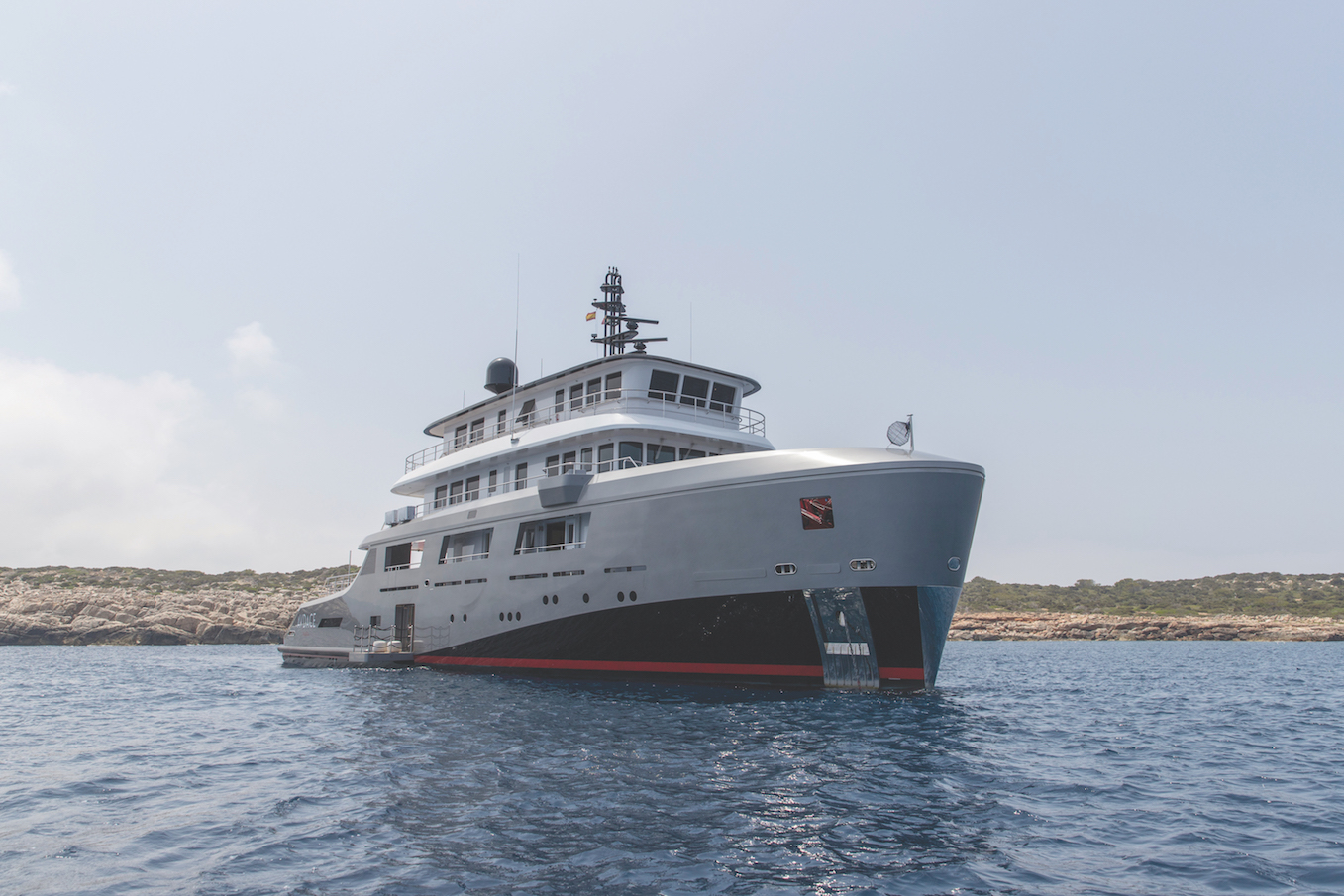 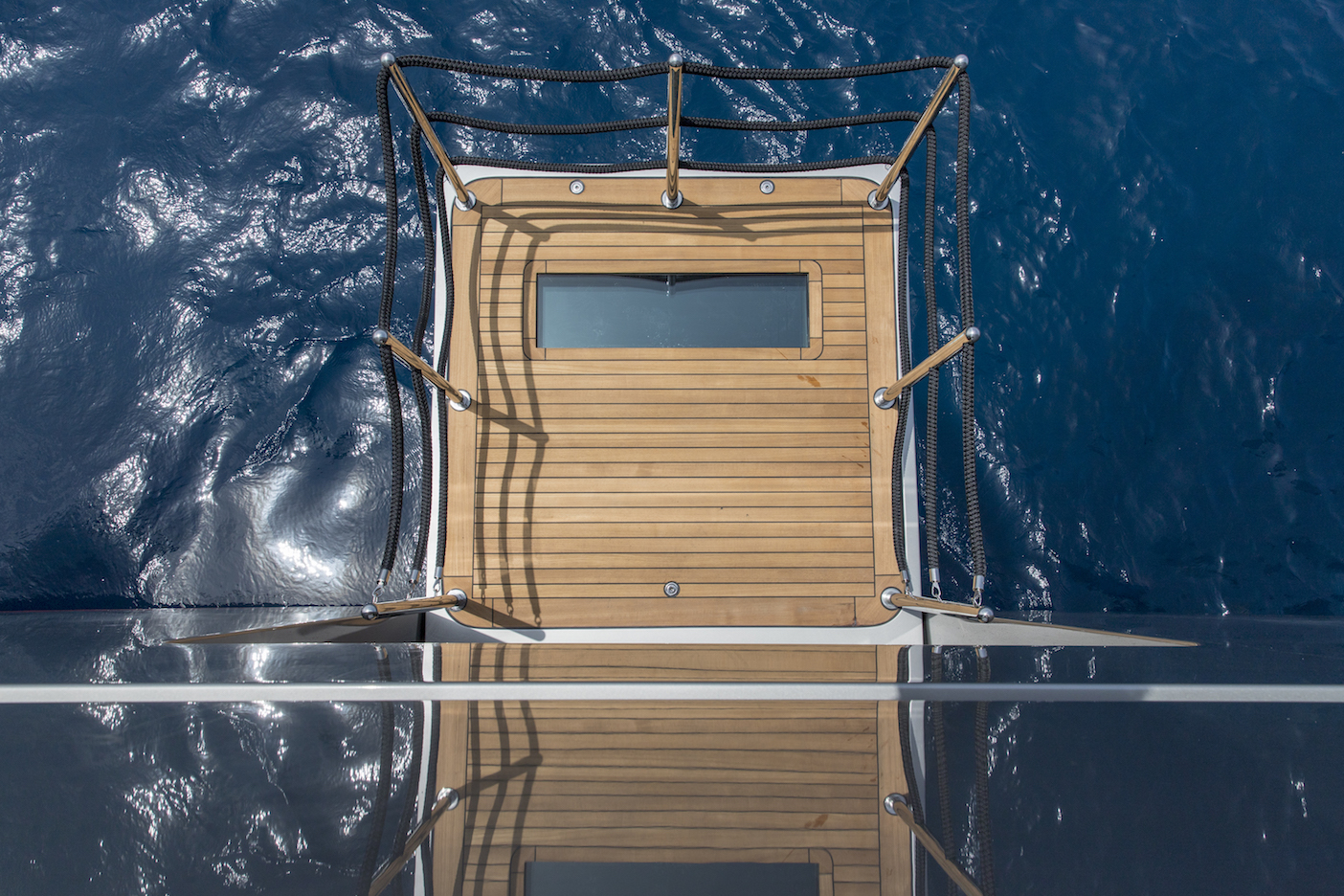 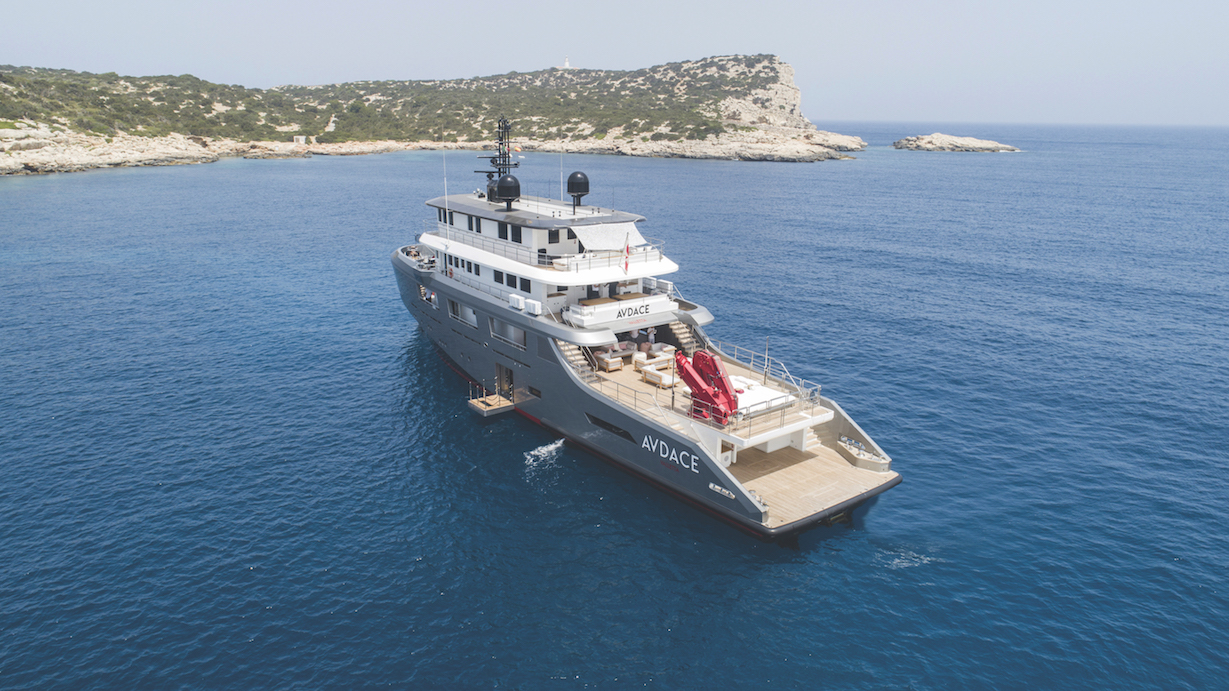 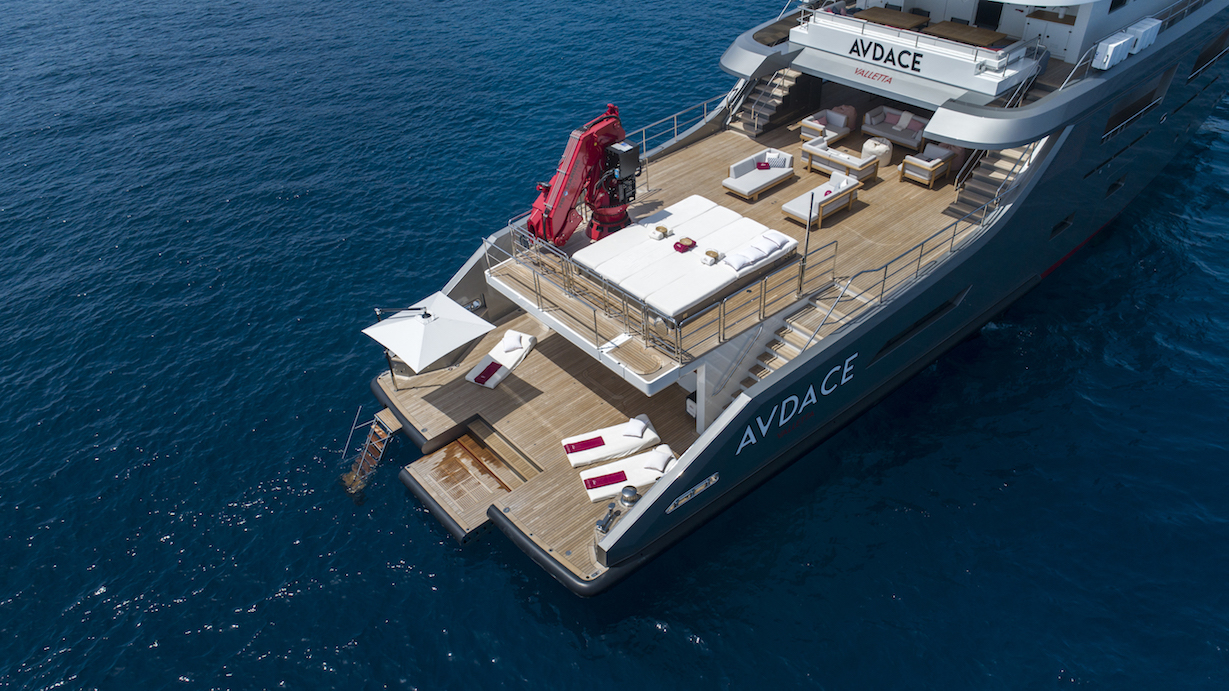 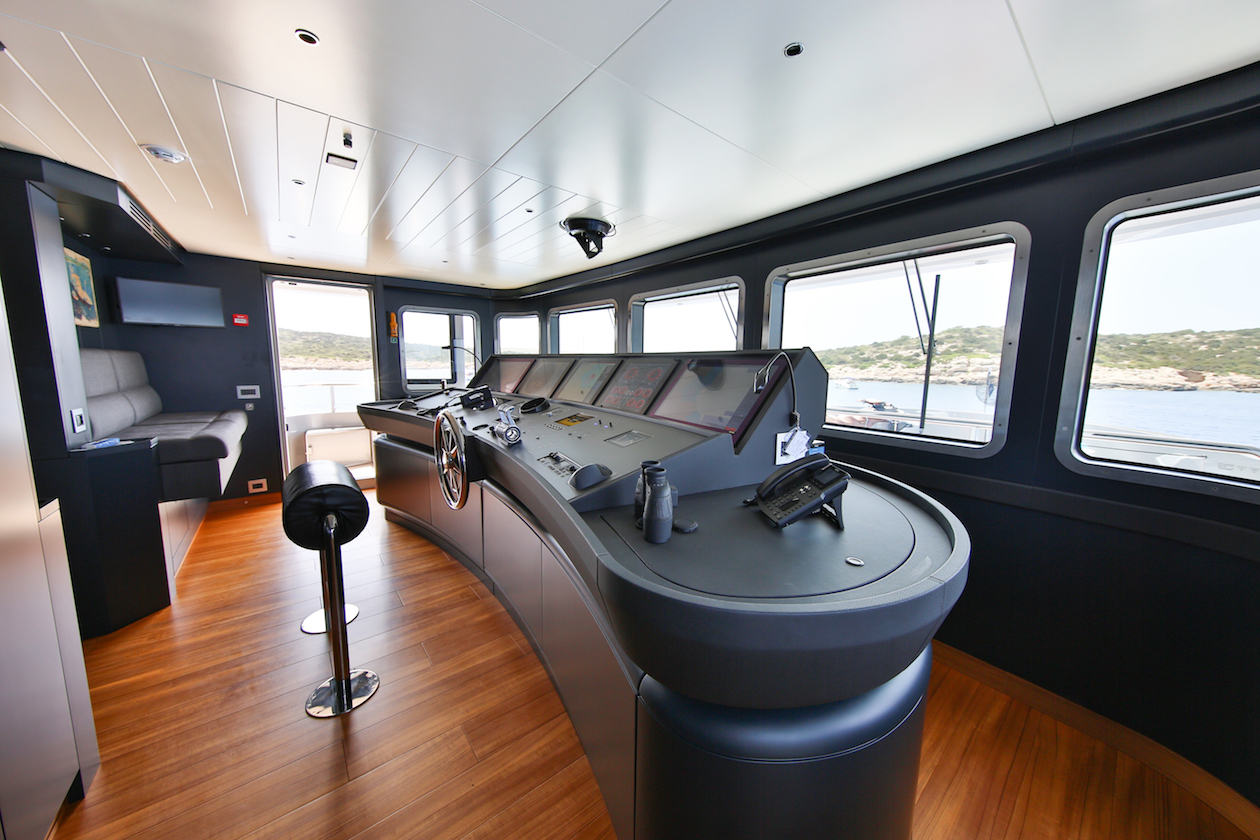 To put the 42.8-metre Audace into perspective, consider Merloni’s background in yachting. For most of the past decade, he resided aboard an Inace 95 – a 29 metre expedition yacht – off Ibiza. Since he wanted to travel to places such as the Caribbean, South America, and the Red Sea without relying on a yacht transport ship, Merloni sought a bigger and, of course, well-engineered vessel. The extra room would be as much for regularly entertaining abundant friends as it would be for his comfort, too. So Merloni began compiling a detailed list of space arrangements and mechanical systems.

Initially, he and his representative – Andrea Pezzini of Floating Life – thought they’d found the right build partner in the form of a semi-custom shipyard which offered long-range, proven cruisers. However, Merloni’s extensive set of specs would necessitate more customisation than the shipyard was willing to undertake. Given the impasse, Pezzini suggested the custom route, though starting with a proven hull design. Specifically, he suggested using a K Series design, which Floating Life had developed with Studio Sculli. Despite the word ‘series’, each K Series allows customers to choose styling, space planning, deck totals and more, and the name actually refers to tank-tested, steel hull configurations for global adventures. Floating Life oversees project management during construction, plus all logistics for customers after delivery.

Cantiere delle Marche’s commercial-construction mindset and its reputation for pleasing globetrotting clients were well matched to Merloni’s requirements. Cupro-nickel piping, independent rudders, and 12-milimetre-thick hull plating (versus the more typical eight millimetres) are standard operating procedures at the Italian yard. For more proof of toughness, witness the 26.1-metre Percheron, which Cantiere delle Marche delivered in 2012. She withstood winds upwards of 57 knots and big seas transiting the Atlantic for the first time, and also put 23,000 nautical miles under her hull in just her first two years.

Still, though, Merloni threw down the proverbial gauntlet with Audace. He wanted a five-deck height and a 42-metre length, without exceeding 500 gross tons.

Among those five decks, one needed to be solely for himself, while another needed to be a full-length, full-height tech deck with commodious dry stowage, a significant walk-in freezer, a laundry room, a garbage room (additionally containing a compactor), and two wine cellars (one for reds, one for whites). And, further, the galley needed to put out dishes for 250 guests, since Merloni loves to entertain.

Speaking of entertaining, one mustn’t forget the two nightclubs. While one is on the main deck, the primary one – and one of Merloni’s first requests, according to Cantiere delle Marche – replaces the beach club. Encompassing approximately 100 square meters, it hosts dozens of friends while some of the most famous DJs from Ibiza’s renowned clubs spin music. What’s more, the music can be as loud as 150 decibels, yet outside of feeling the pulse in a nearby room, no one will hear the sound throughout the rest of the yacht. Domenico Ranieri, Cantiere delle Marche’s project manager, asserts this because there’s one ton of insulation found in the club area alone, plus he has experienced the sensation at Merloni’s home. 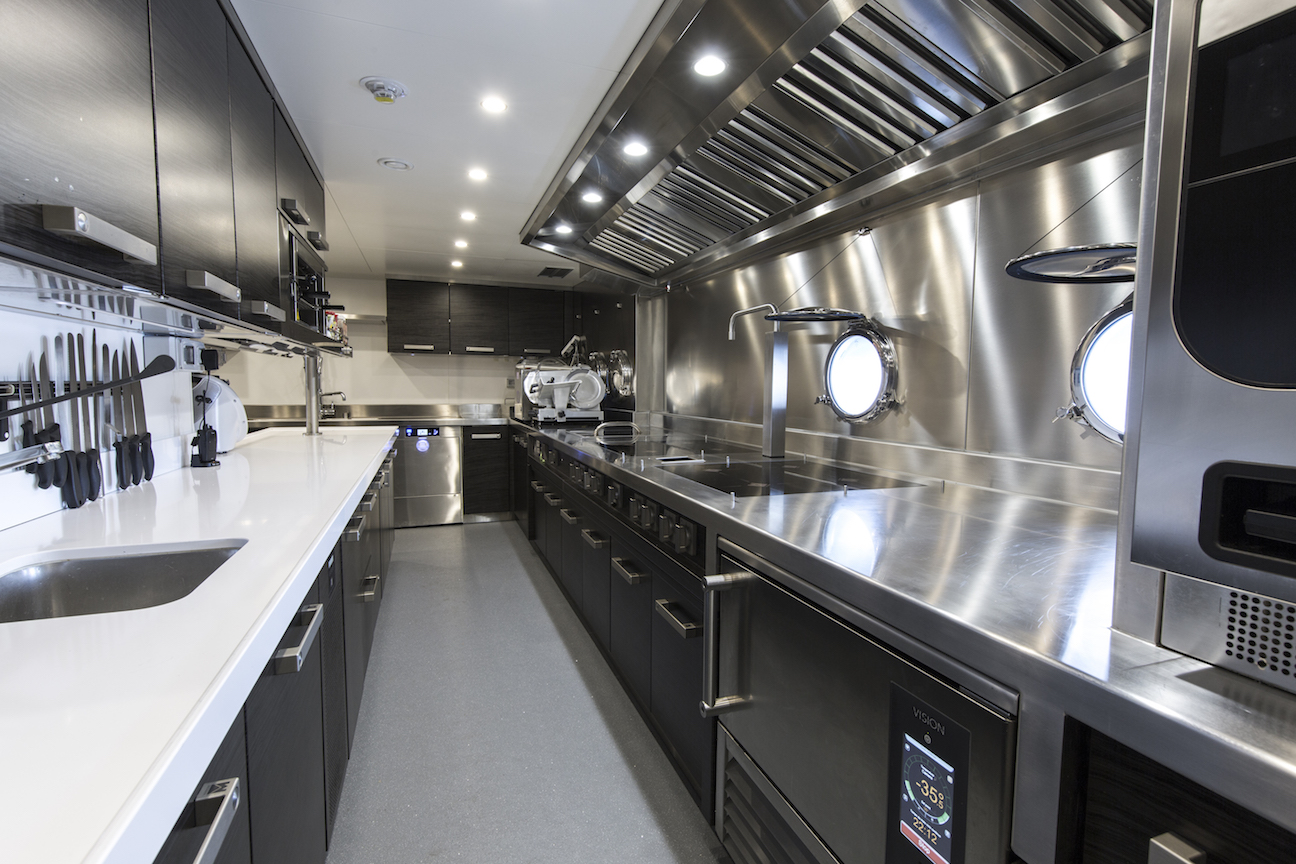 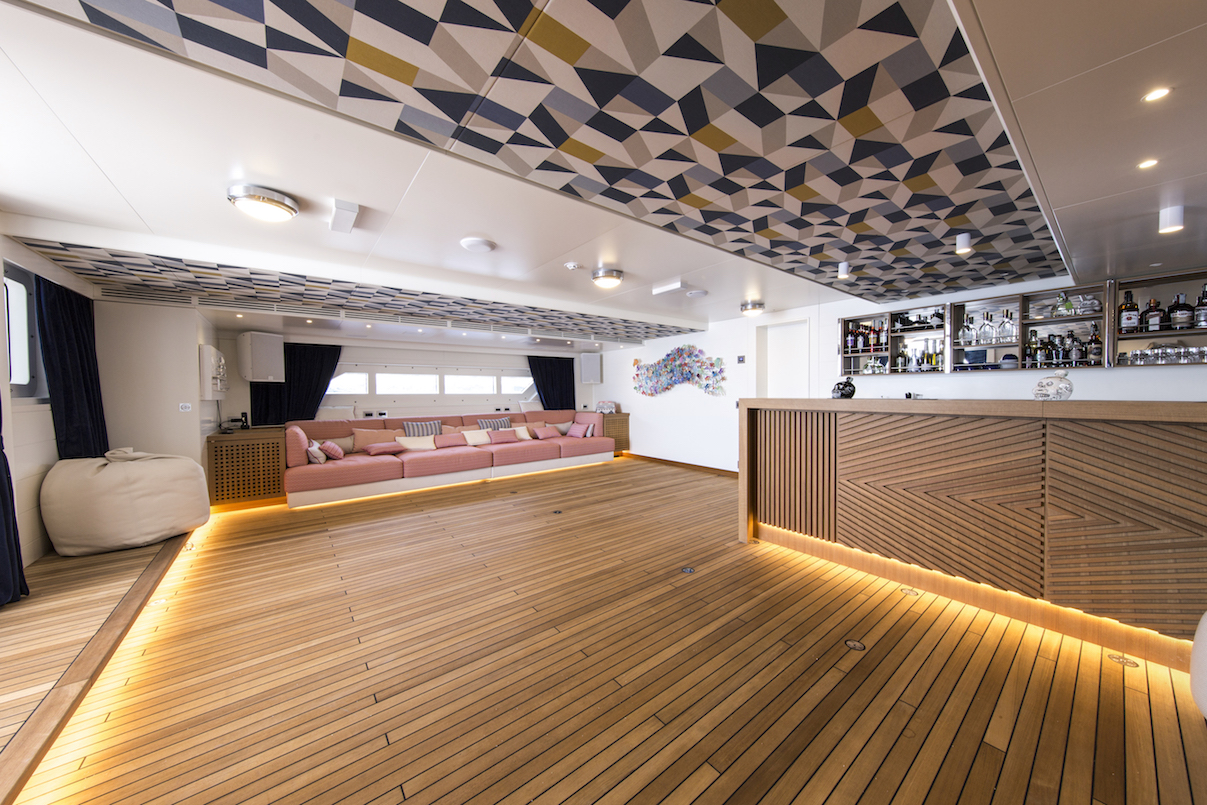 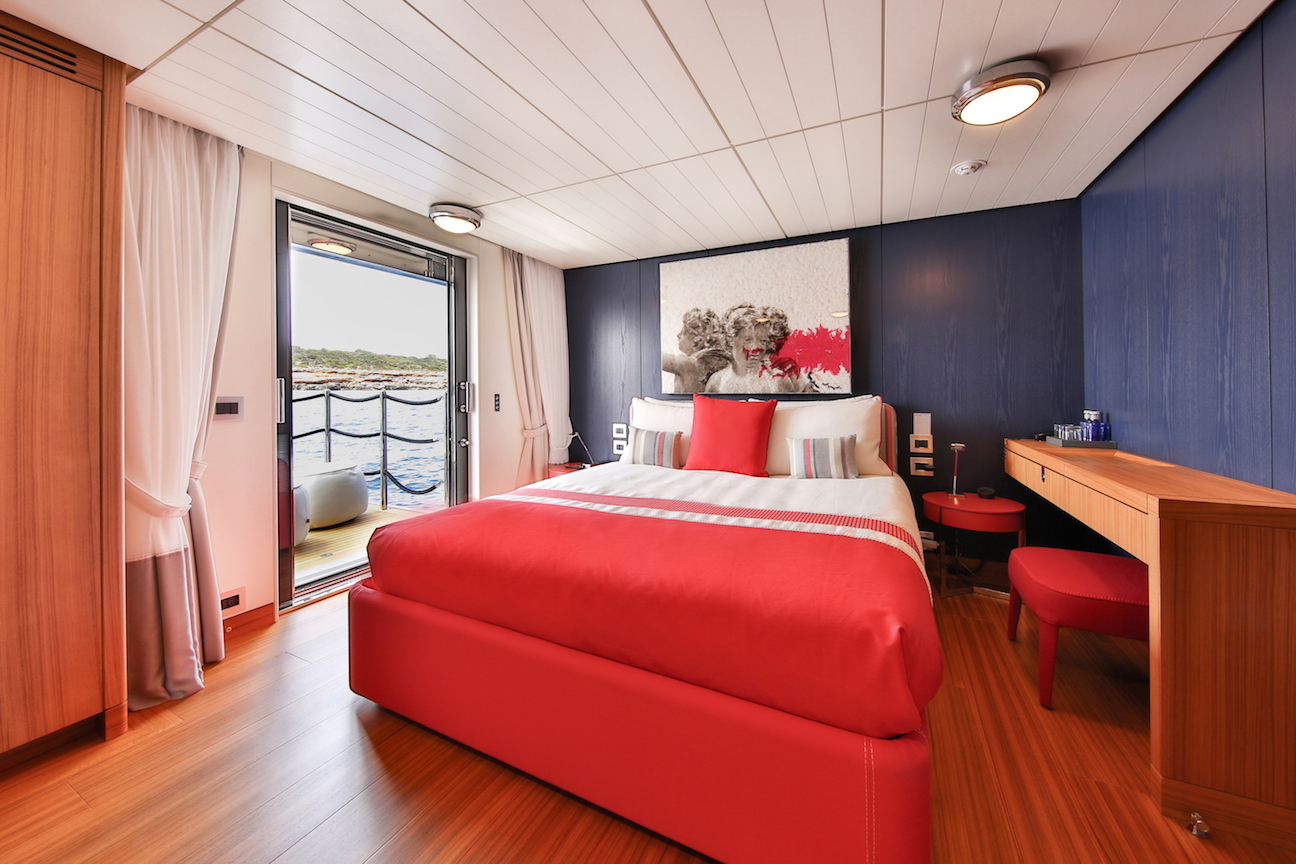 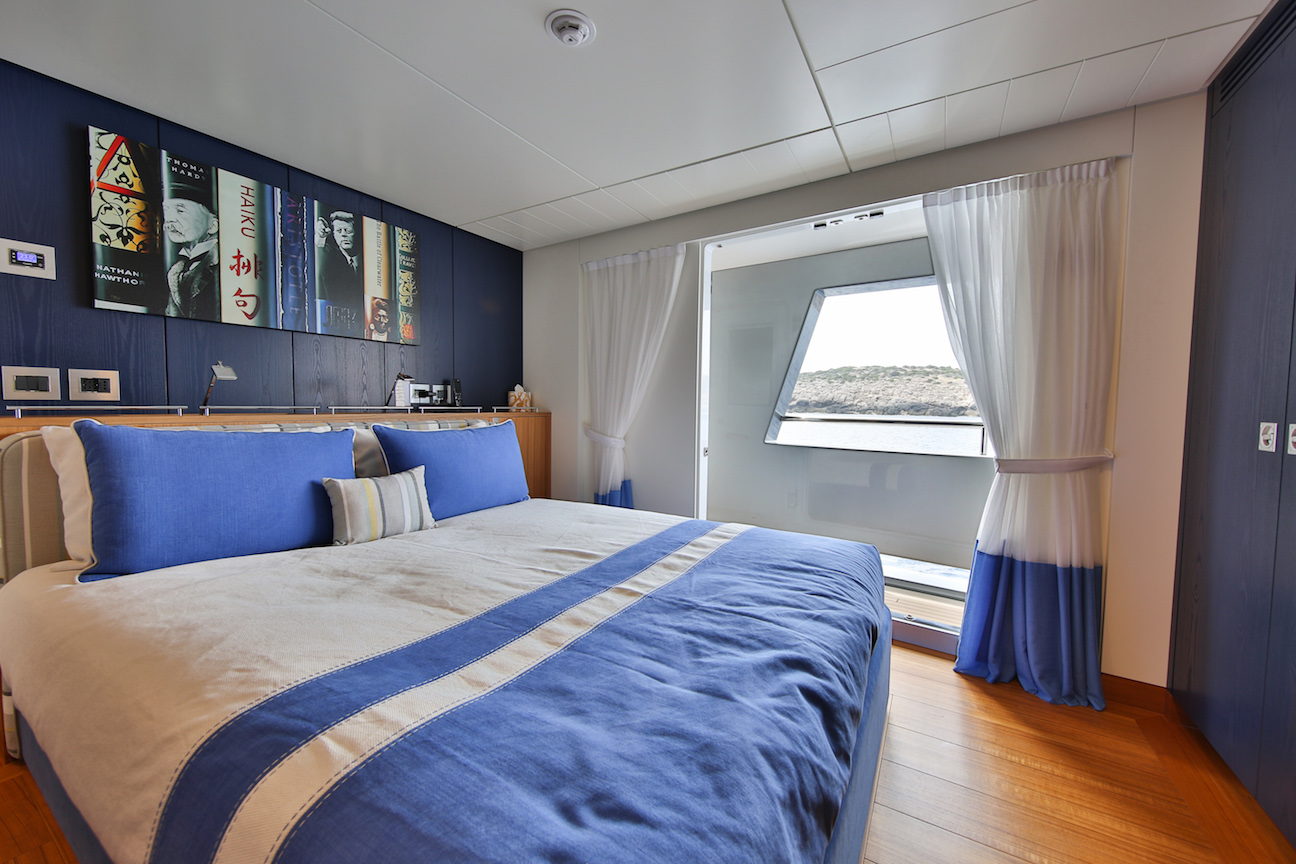 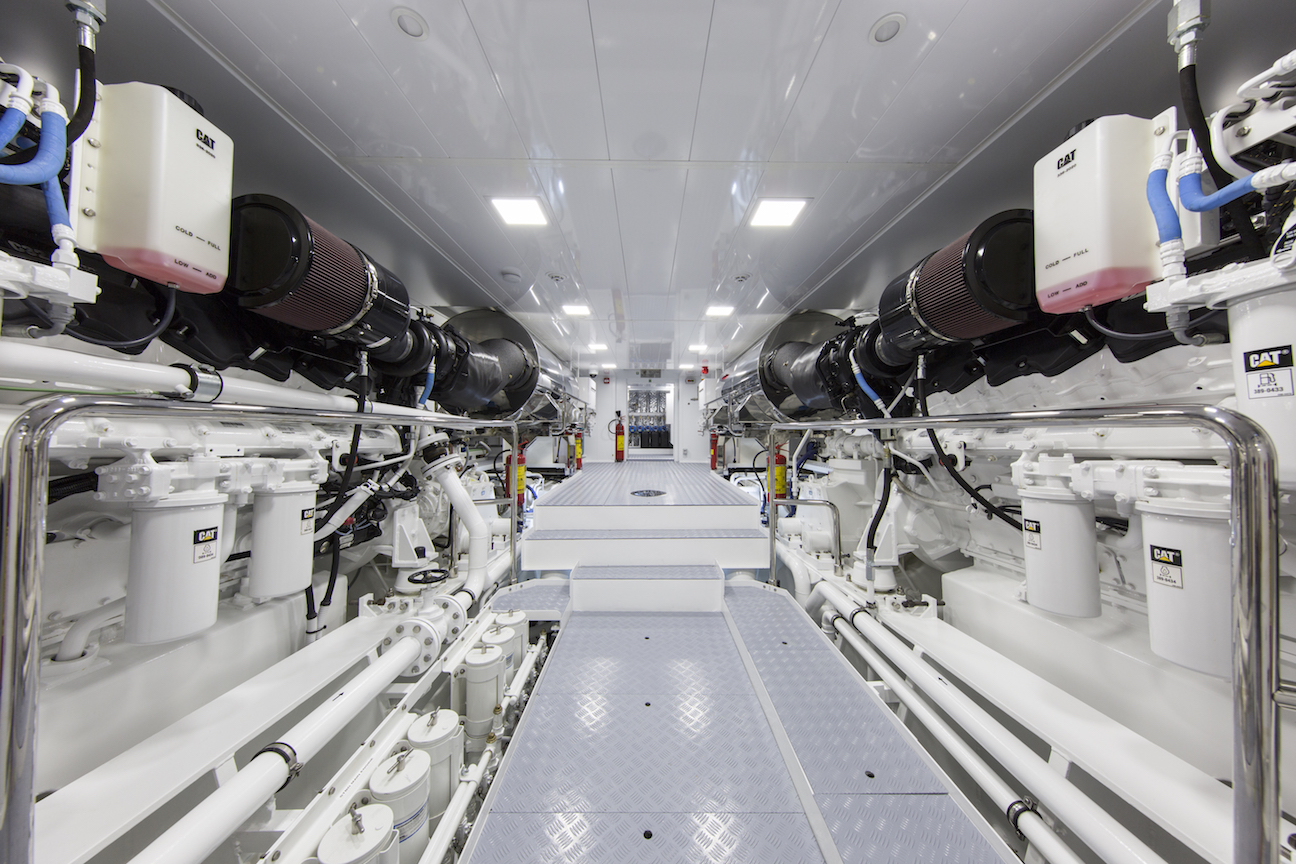 When guests have danced until they can dance no more, they have four staterooms where they can relax and recharge. Just as having full-fledged discos onboard is unexpected, so, too, is how the guest cabins are arranged. Two are on the main deck, each opening onto the side decks. The other two are on the lower deck but still feature fold-out balconies. Not even custom superyachts twice Audace’s size tend to treat friends and family this way. In addition, all four staterooms have opening ports, a “must” for Merloni.

Having two VIP-like guest staterooms on the main deck, along with the above-mentioned galley, limits the space you’d typically see devoted to a main saloon. In fact, Audace doesn’t have one at all, because Merloni hasn’t used them aboard his previous yachts. Instead, he can invite friends to come up to the aft TV lounge on his private deck.

‘Can’ is the operative word. As much as Merloni loves to party and entertain big groups, he values his privacy. It’s the reason why he wanted an entire deck for solo relaxation. Besides containing the TV lounge, it has a private alfresco area aft with a spa pool as well as table and settee groupings. His stateroom, meanwhile, sits fully forward, allowing him to take in the tremendous, varied views Audace will offer him thanks to her range of 5,400 nautical miles at 10 knots.

Those travels aren’t limited to the water, either. Audace carries some terrific toys, ranging from jetskis to an inflatable island.

The jetskis stow on custom platforms on the foredeck, beneath which two of Merloni’s most treasured toys reside. One is a custom Land Rover Defender SUV, while the other is a BMW motorbike. Reminiscent of the nine-ton crane sitting on the aft deck, another red crane, though not as hefty, lifts the vehicles. Merloni may not be done with the toys yet, either. Mindful of the future, the design and construction teams included 5.5-metre-deep holds beneath the crane’s sole. “He wants to do everything with this boat,” summarizes Ranieri.

Building a tough yacht is one thing. Building one to meet firm specifications from an owner with a singular vision is quite another. When you consider that Cantiere delle Marche hadn’t previously tackled a fully custom build, and that Merloni made 140 change orders during construction, Audace is audacious in more ways than her name. She’s all the more remarkable for being just four months delayed against the original delivery schedule.

Whether cruising in icy waters – Audace’s hull plating is 20 millimetres thick at the bow – or roaming where Merloni can launch his custom vehicles, the yacht is not going to sit still. Audace certainly makes a big, bold statement in terms of what a custom yacht can be.