Yachting guru and founder of Fleming Yachts, Tony Fleming, invites you to Venture with him to the tropical delights of Isla del Coco and the Galápagos.

Written by Tony Fleming
Photography by Christine and George Sass

It’s widely known that there aren’t many power boats that have the range and sea-keeping ability to make the crossing to the Galápagos Islands.

On our trip to this ancient wonder, Captain Chris and I were joined by Christine and George Sass, an experienced photojournalist. Our departure point for the Galápagos was at Los Suenos, Costa Rica, where there is a Marriott Ocean & Golf Resort and an astounding marina crammed with meticulously maintained sports fishing boats.

With checklists and preparations given the proverbial tick, Venture’s bow was pointed out towards the great beyond – the Pacific Ocean – and with nervous anticipation, we set off.

Our first stop was a minuscule speck that eventually took the form of Isla del Coco (Cocos Island). Located 483 kilometres off the coast of Costa Rica, Cocos is a registered National Park – managed by Costa Rica’s Ministry of Environment and Energy.

The island’s steep, forested flanks are shrouded in mist, giving the tropical island a lost world appearance. Once we arrived in Chatham Bay (see photos below), we were called on the radio from a barely visible hut and instructed to pick up one of the moorings. (I feel the need to let you know that Cocos is only accessible by boat… and there is very little infrastructure for visitors!)

The following morning a magnificent sunrise and two courteous rangers greeted us. After completing formalities, we watched a short video that mapped out the national park, as well as rules and regulations that we had to observe. At this point, I realised that arranging guided walks through the majestic rainforest would only take place through them. (They’ve cornered the market!)

At a latitude just 5 ½ degrees north of the Equator, and an annual rainfall of 7,000 mm, the climate is steamy, tropical and unpredictable. After rounding another bay, we were ushered up the mouth of a small river. Once ashore, we started our trek by venturing over an unusual suspension bridge… fashioned from retired fishing floats!

The rough track climbed steadily through the exuberant vegetation and the combination of heat and high humidity made for an exhausting trek. Initially, we attempted to keep our feet reasonably dry by avoiding puddles, but this soon proved futile when the last section required wading across a boulder-strewn river. The drenching was worth it, however, as we soon reached a breathtaking waterfall. Picture pristine water is cascading over vines and rocks before tumbling into a makeshift pool. Utter bliss!

Most people visit Cocos for the diving but, sadly, we are not qualified, and we didn’t have time. It felt rather silly to be moving on after such a brief visit, but we had hundreds of kilometres ahead of us. 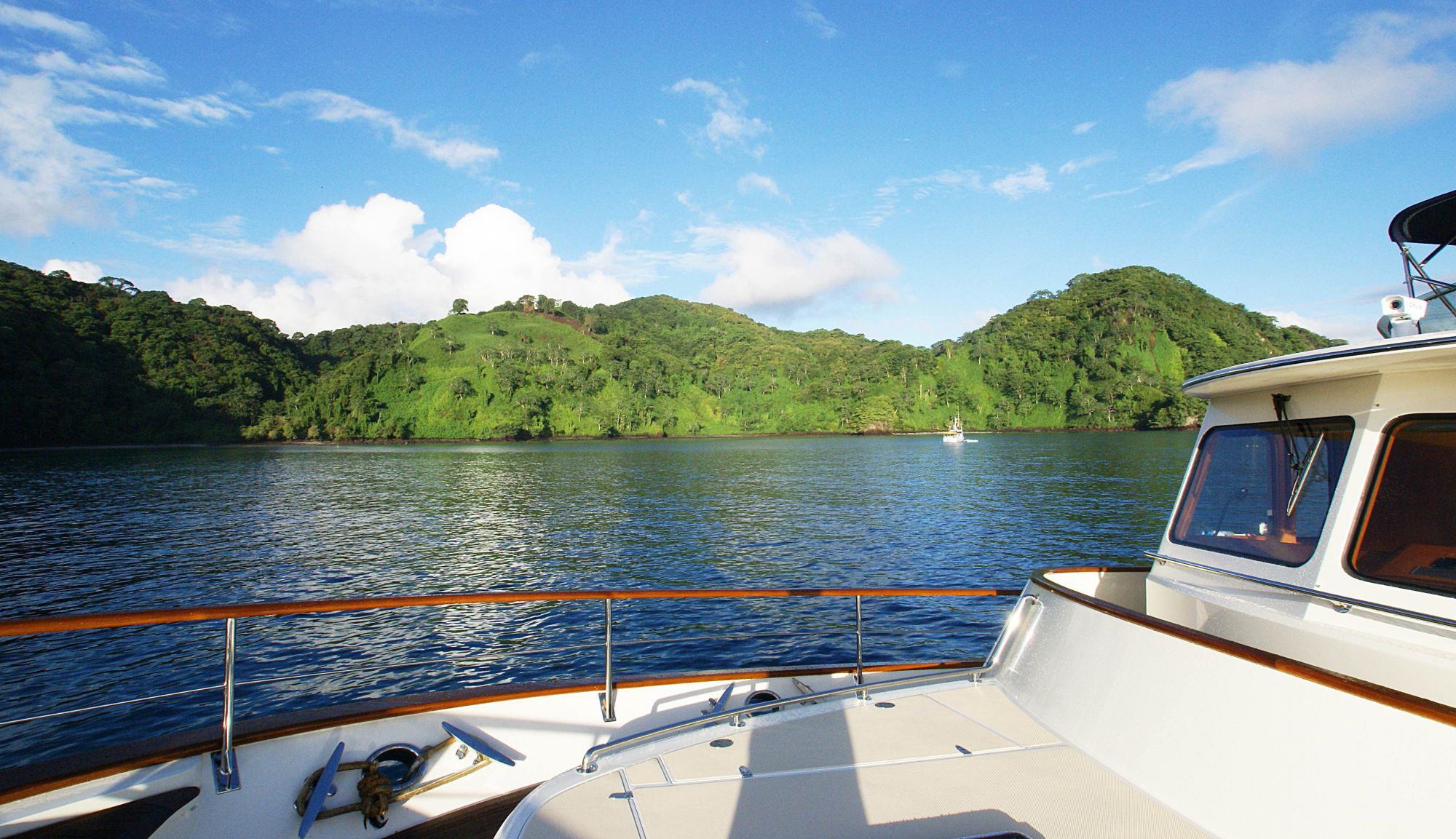 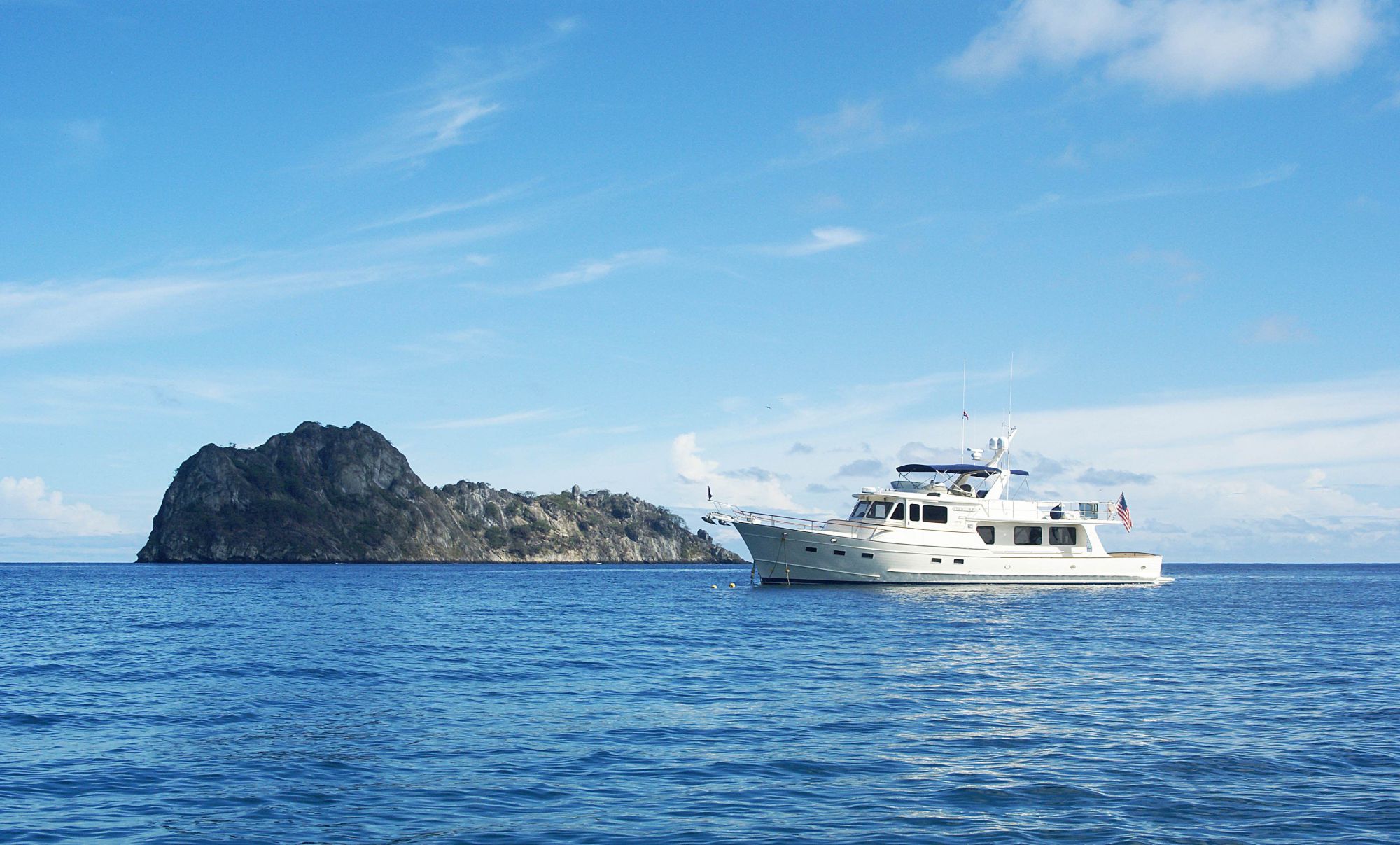 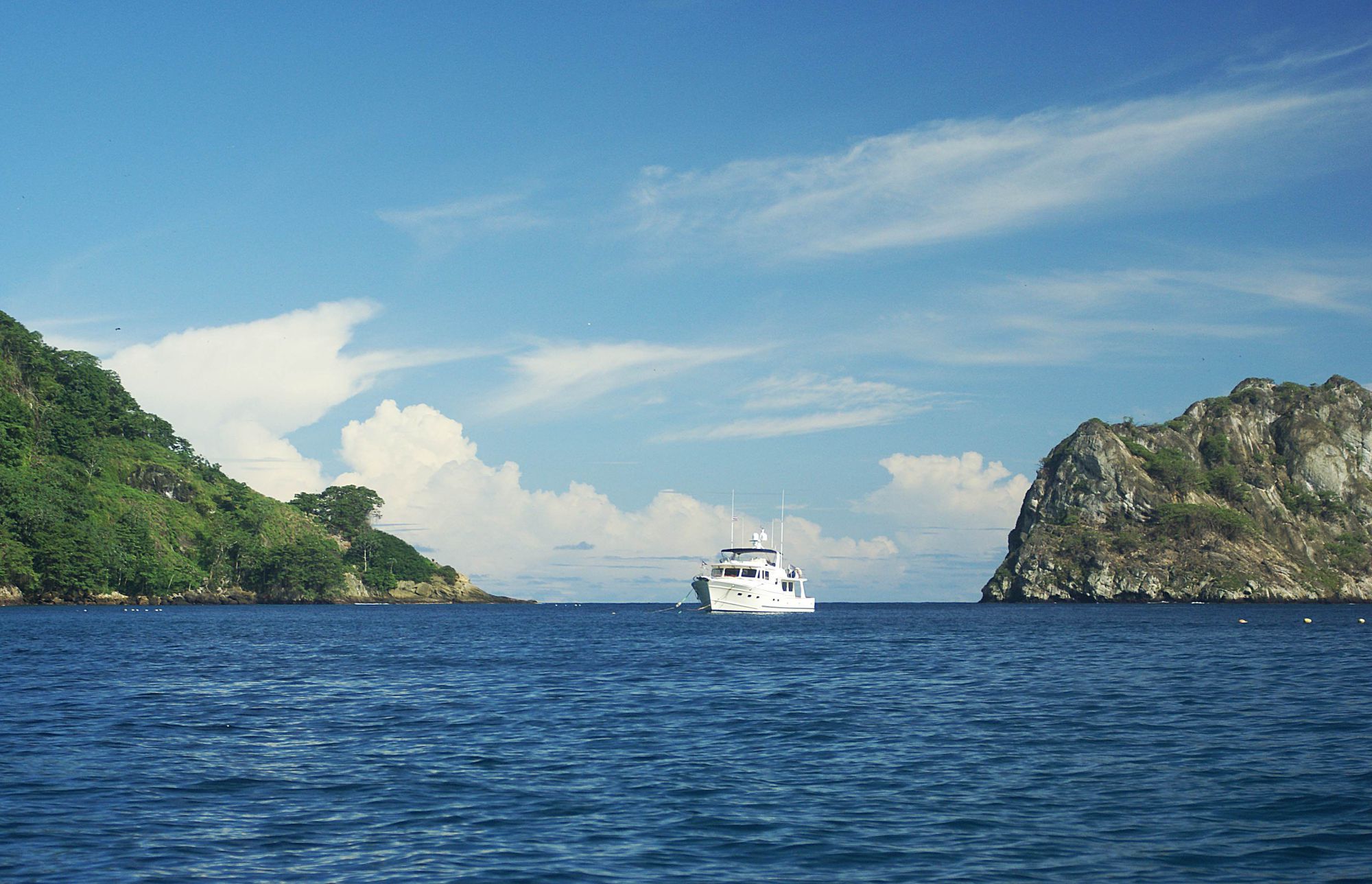 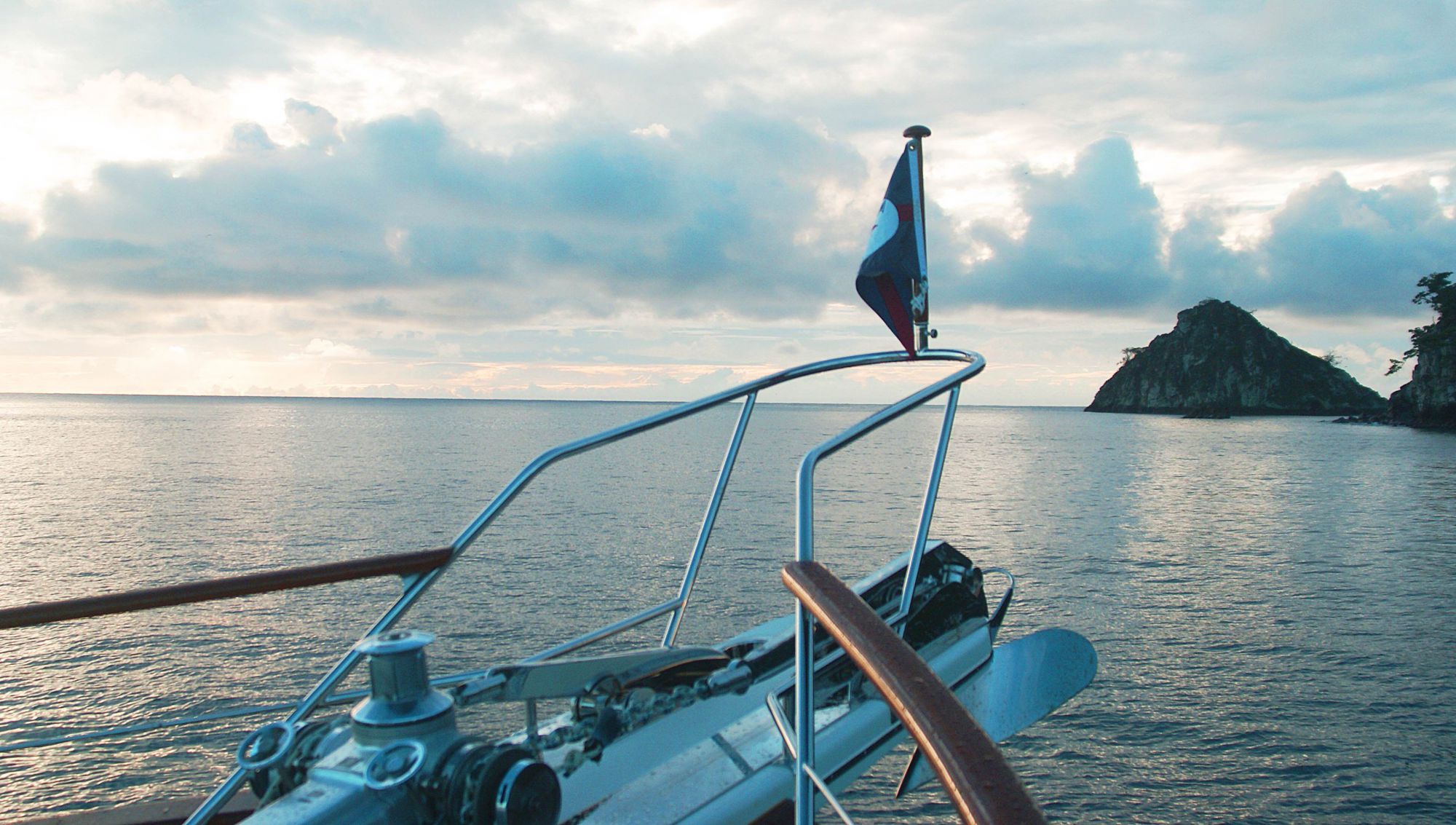 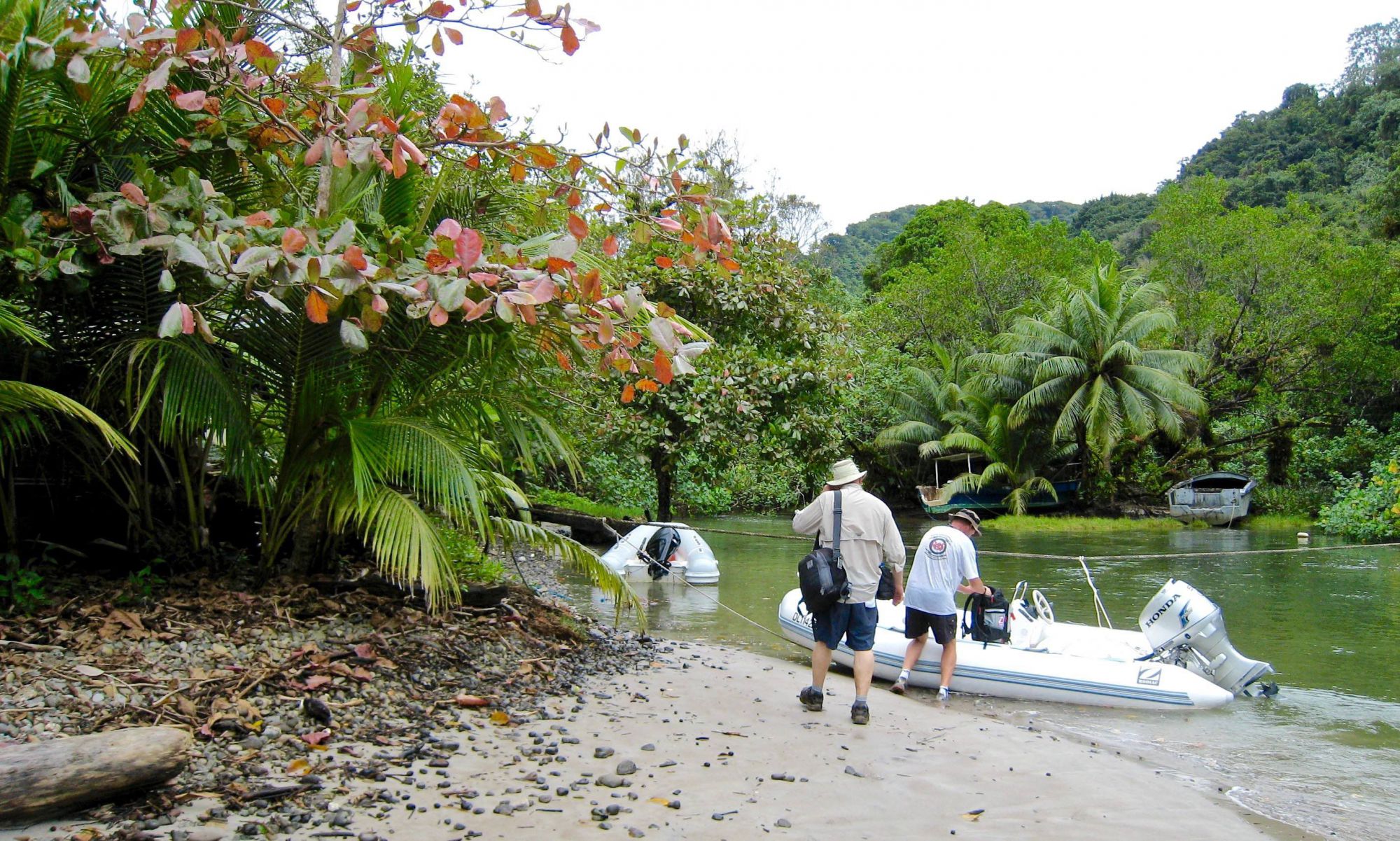 Landing up the river in the Cocos

When we left the following morning and set out on the 700 kilometre journey to the Galápagos, heavy rain clouds once again assumed the role of host, and soon Isla del Coco disappeared behind its misty curtain. For the next 48 hours, we ploughed a lonely furrow across the ocean. On the final night before reaching Galápagos, white birds (later identified as swallow-tailed gulls) fluttered like giant moths in and out of the pools of red and green light cast by the navigation lights. Except for faint clicking and mewing sounds, their flight is silent. Eat your heart out, Charles Darwin!

We crossed the Equator at 0300 and arrived in Academy Bay at Puerto Ayora on Santa Cruz Island at 0900. Anchoring amongst the many boats in the bay sent a rush as we anticipated what was to come.

We started our tour of the storied islands the following morning and, over the next eight days, cruised 526 kilometres through the archipelago. It was at this point that I began to take on board the fact that only about 3 percent of the land in the Galápagos is inhabited or cultivated by humans. Therefore, a strict itinerary must be arranged and adhered to. For example, if you are scheduled to visit somewhere in the morning then you must be gone by the afternoon.

On top of this, no one can visit any place without a guide and there can be no more than 16 persons per guide. Once ashore, the trails are clearly marked with black and white posts and you cannot deviate from the marked trail. Getting ashore can also be a challenge. Most landings are accurately described as “wet”, which means that you should be prepared to get, you guessed it, wet! Anchoring the yacht is yet another challenge, as many of the anchorages are exposed a rocky bottom. We managed to bend two anchors in as many days! 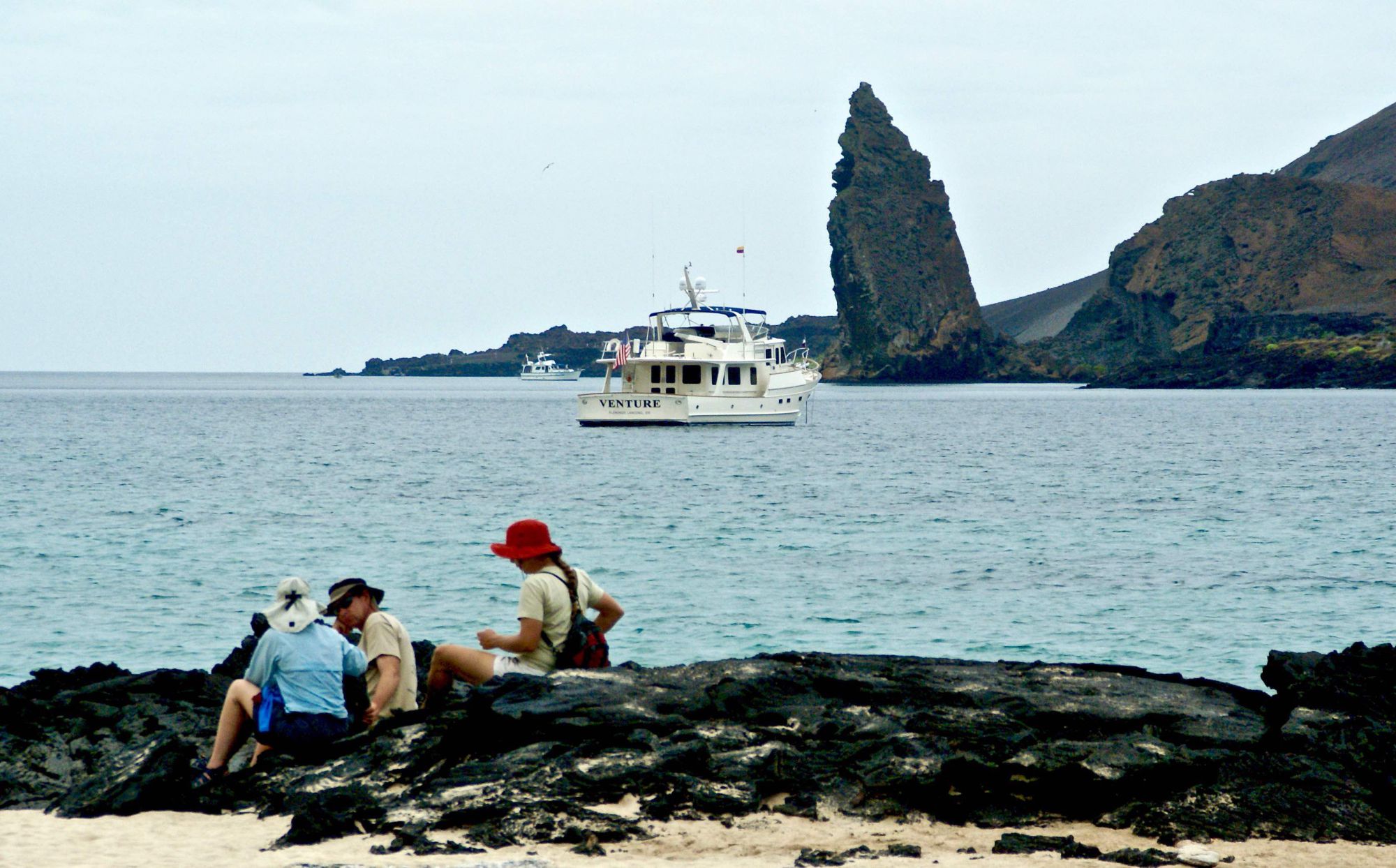 We anchored just off a lava field around the Galapagos 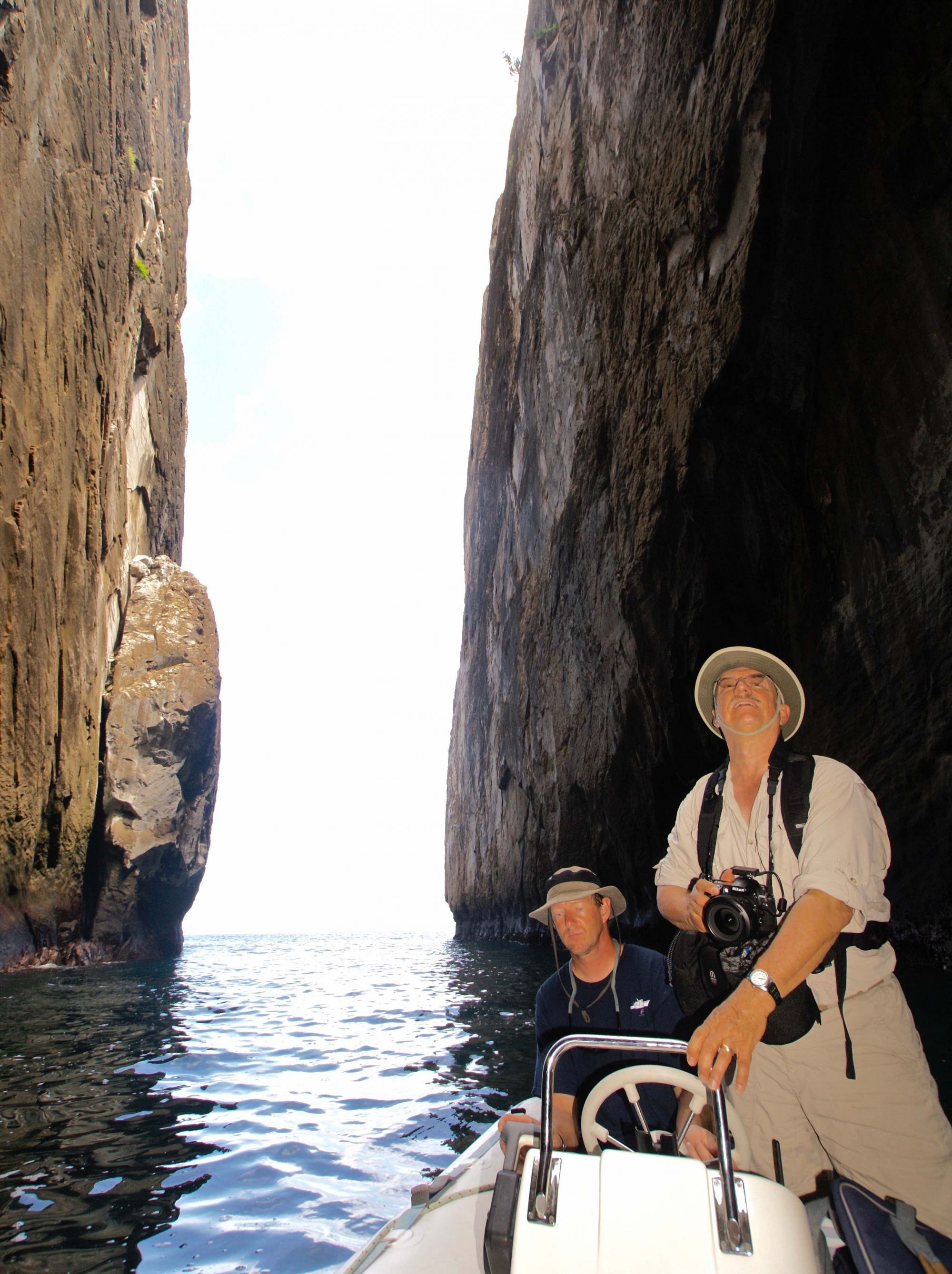 Chris and George doing what they do best! 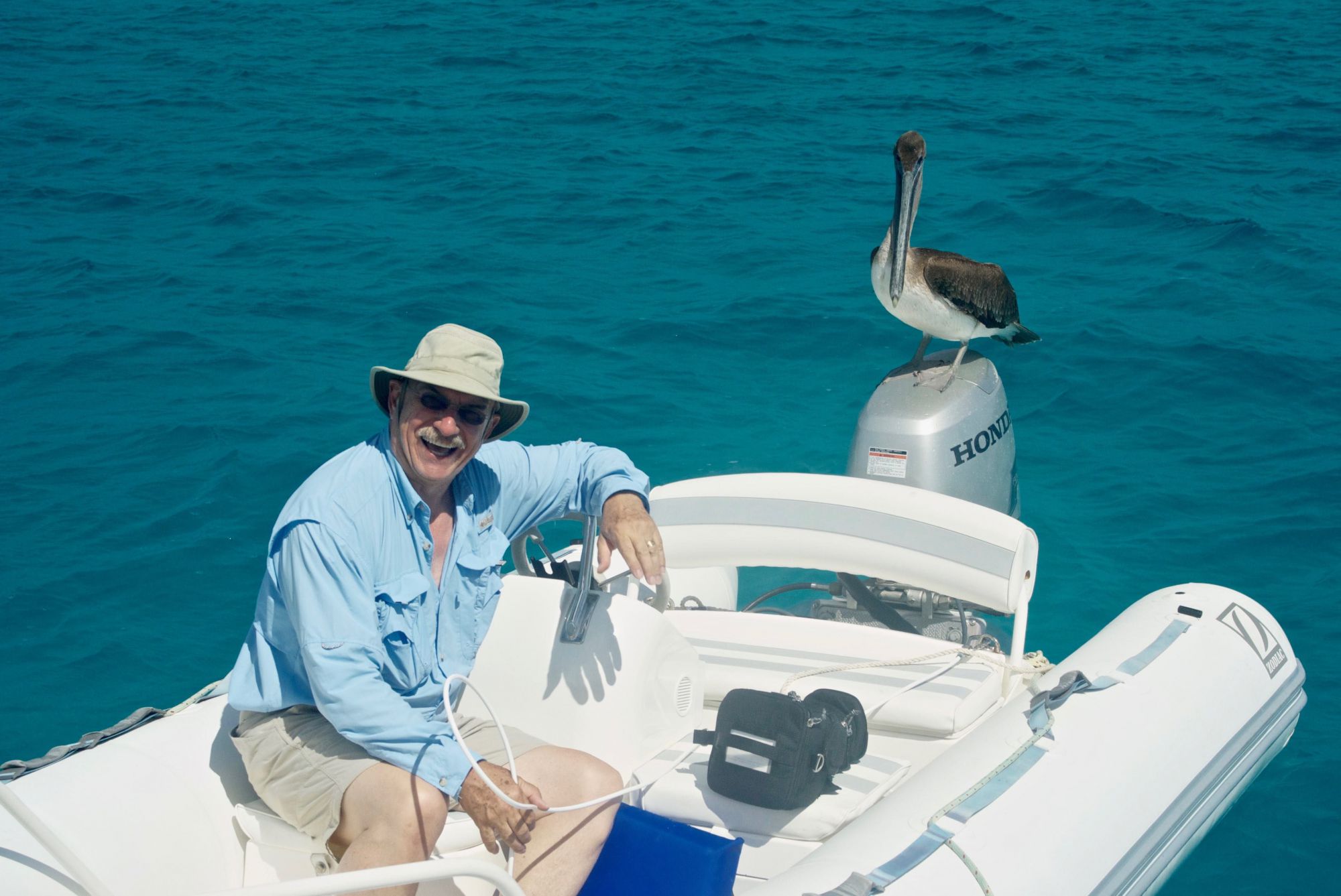 George and his new mate 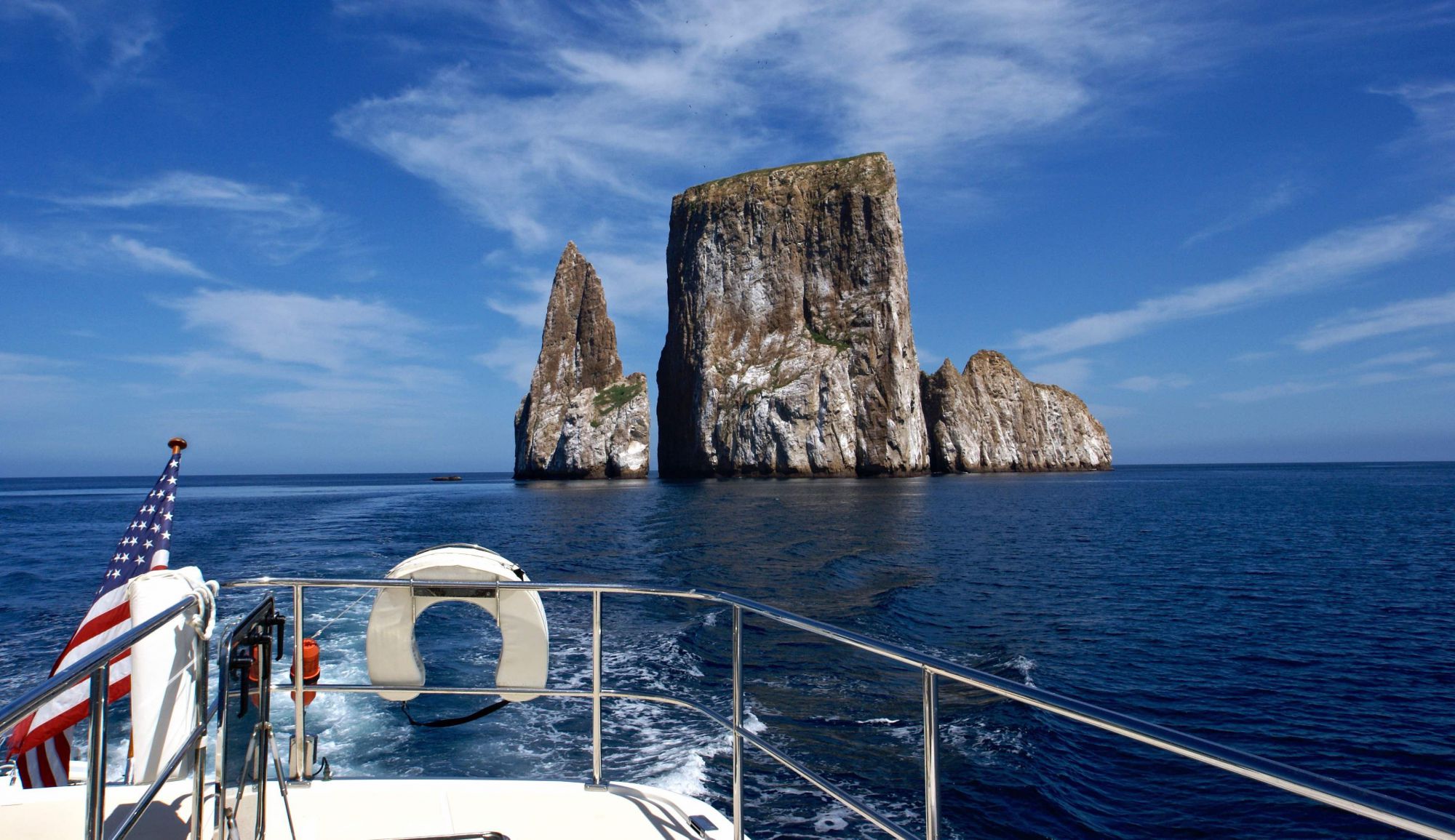 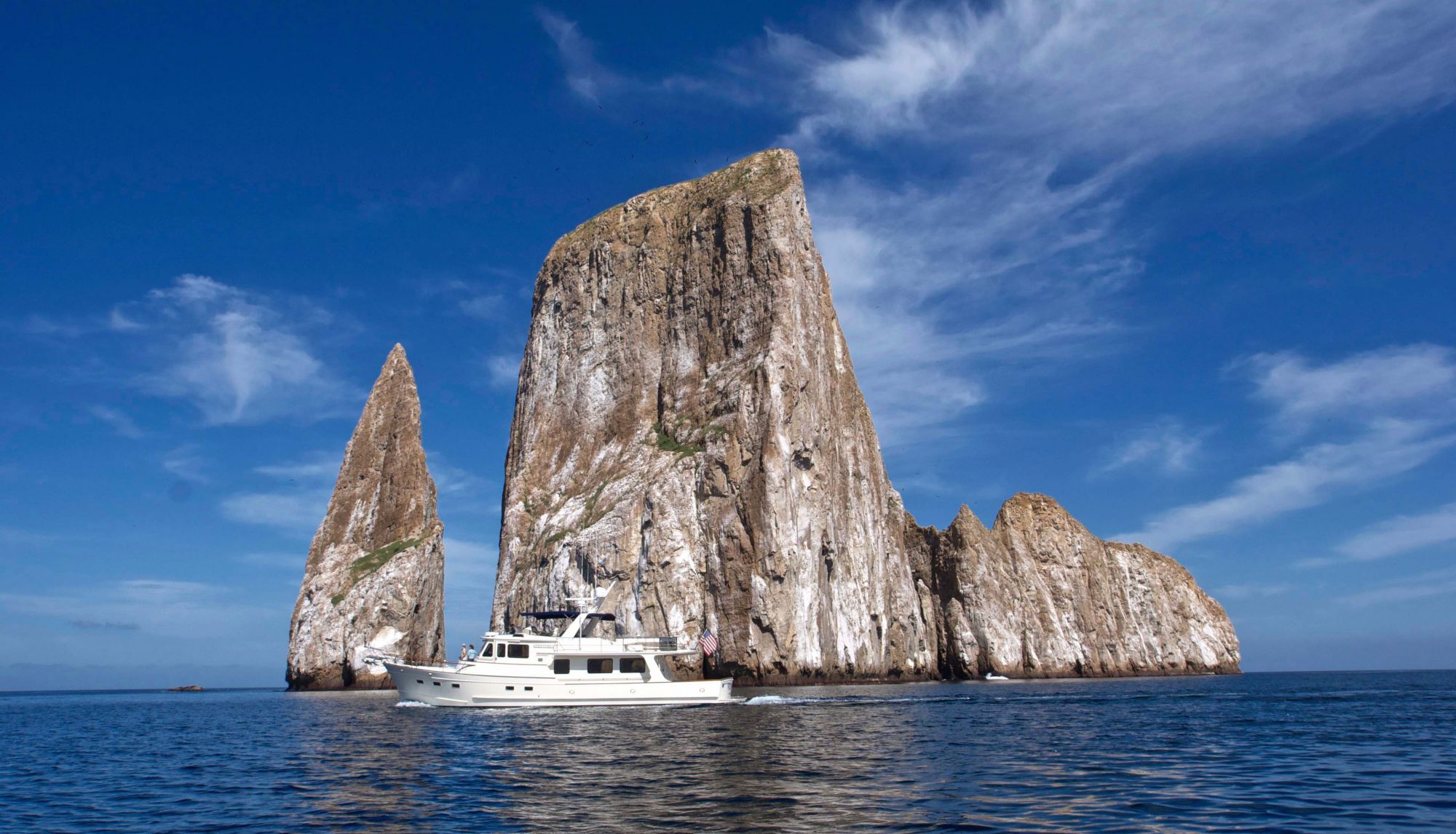 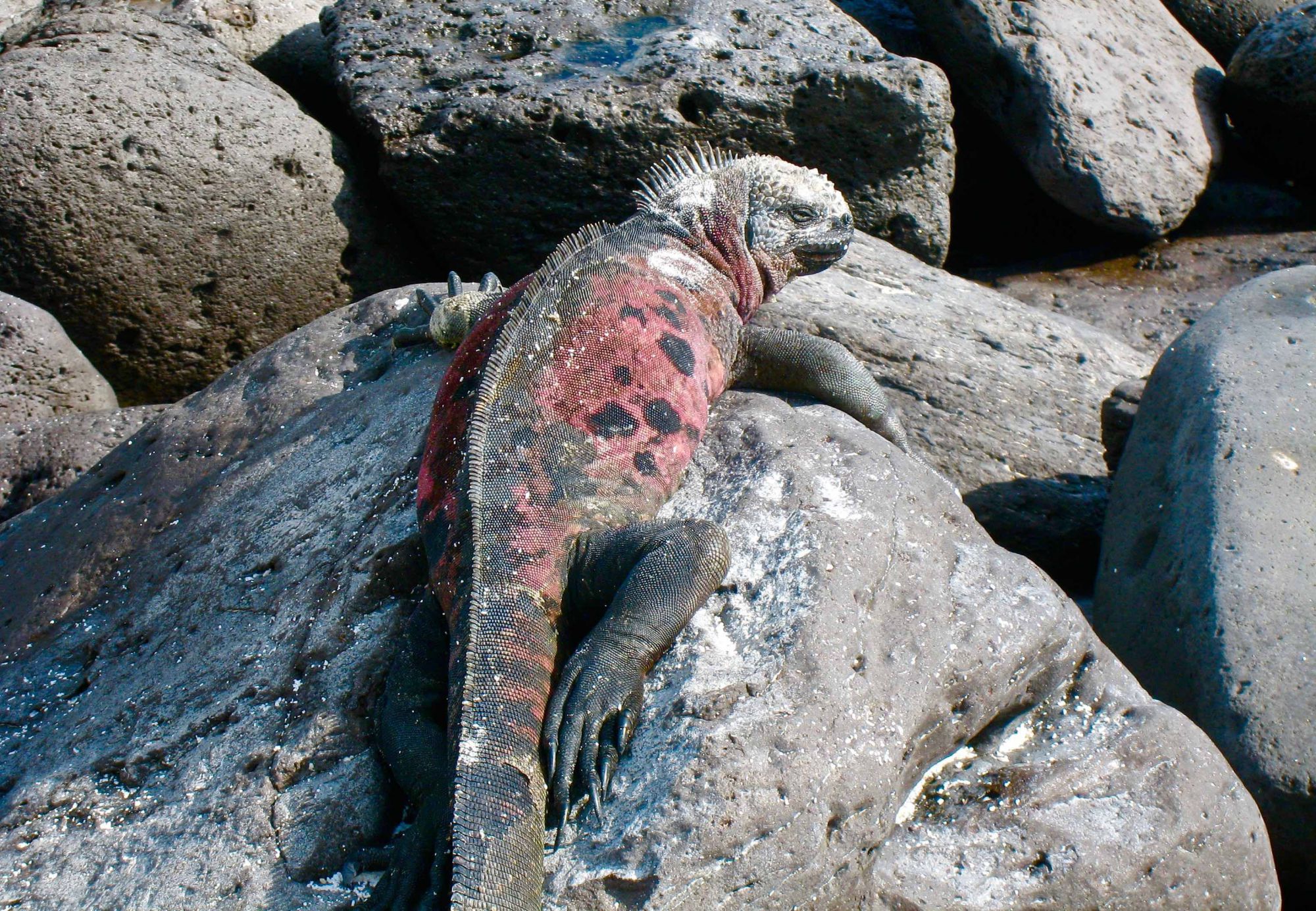 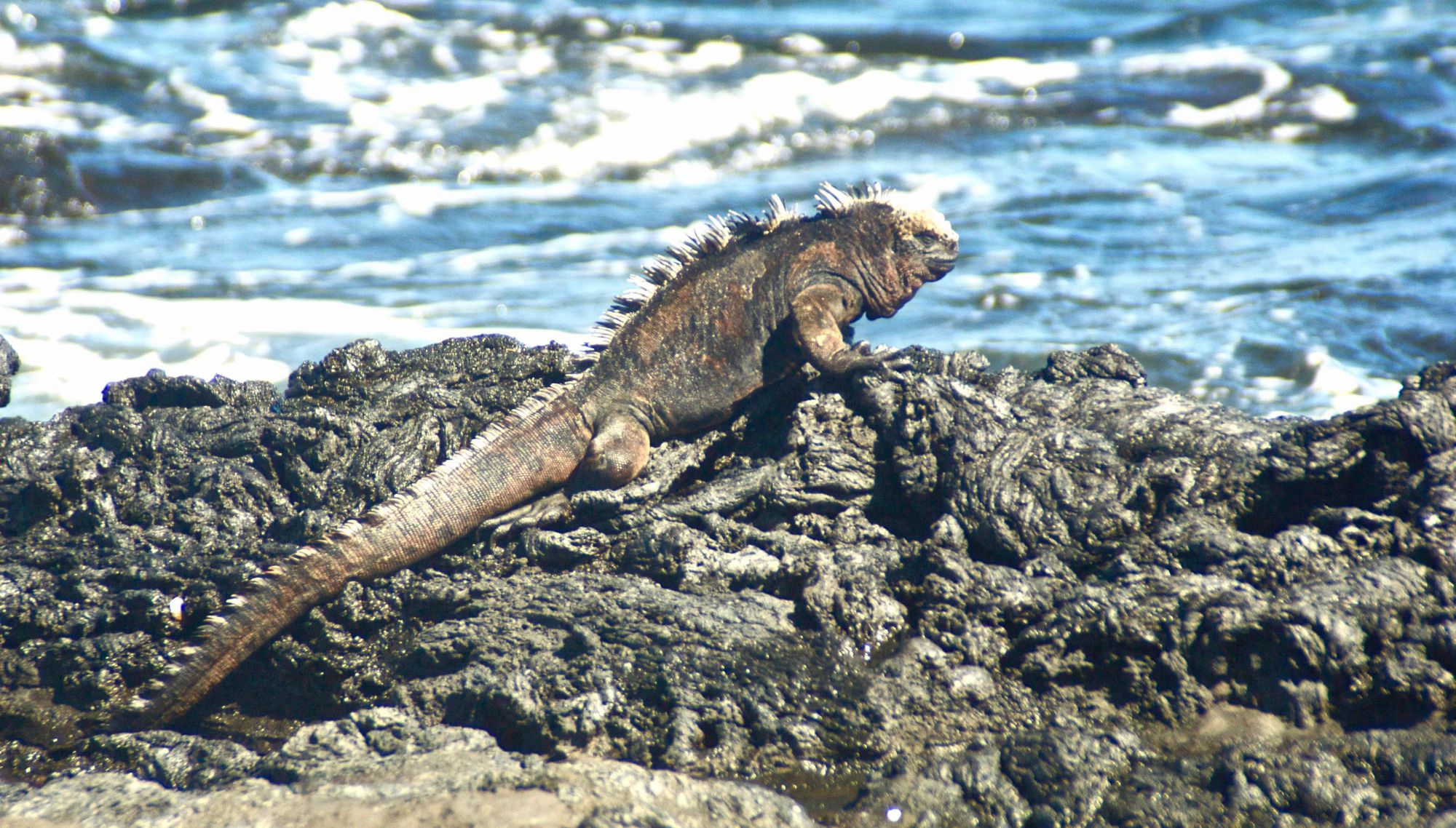 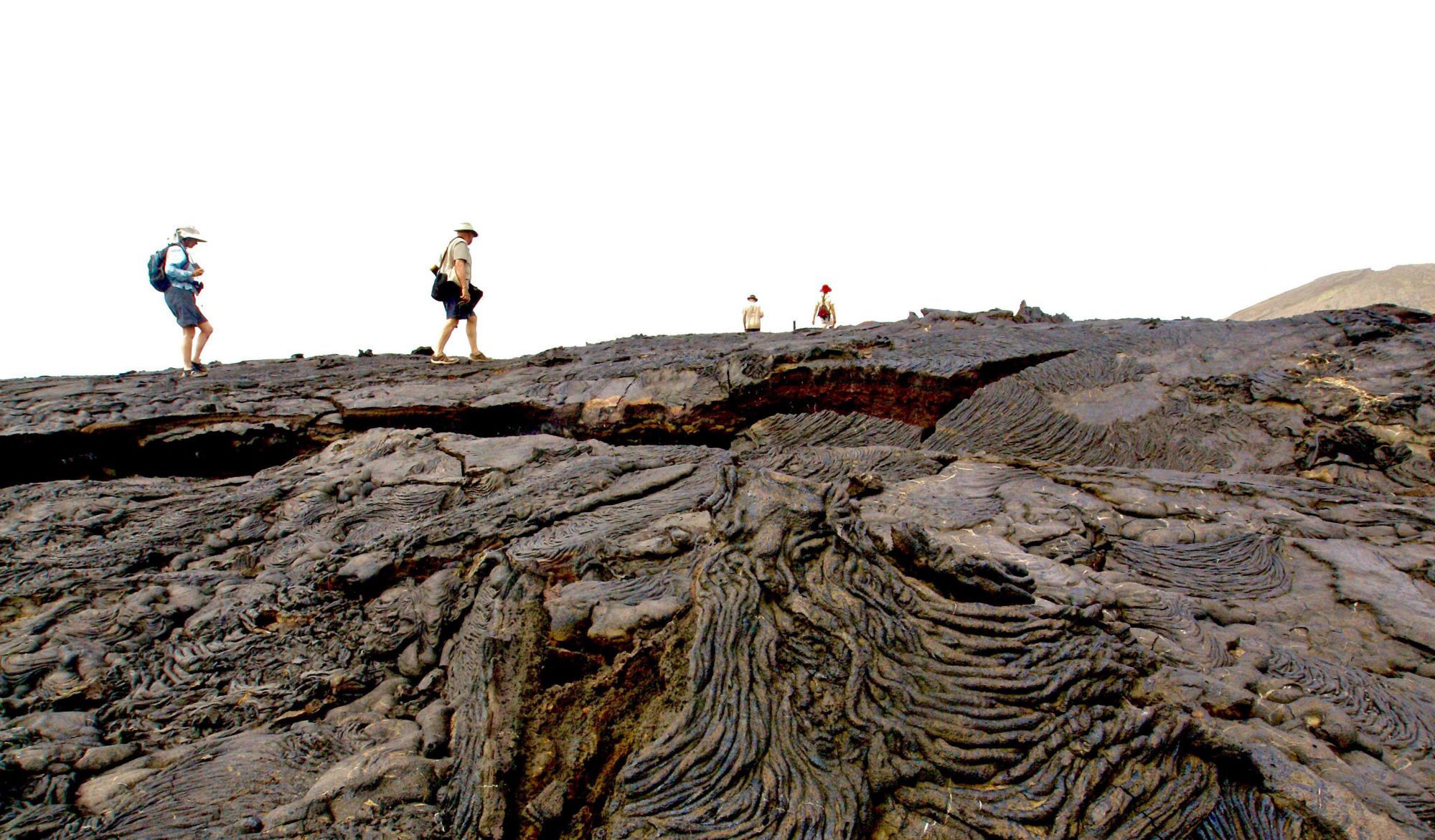 Back to the lava 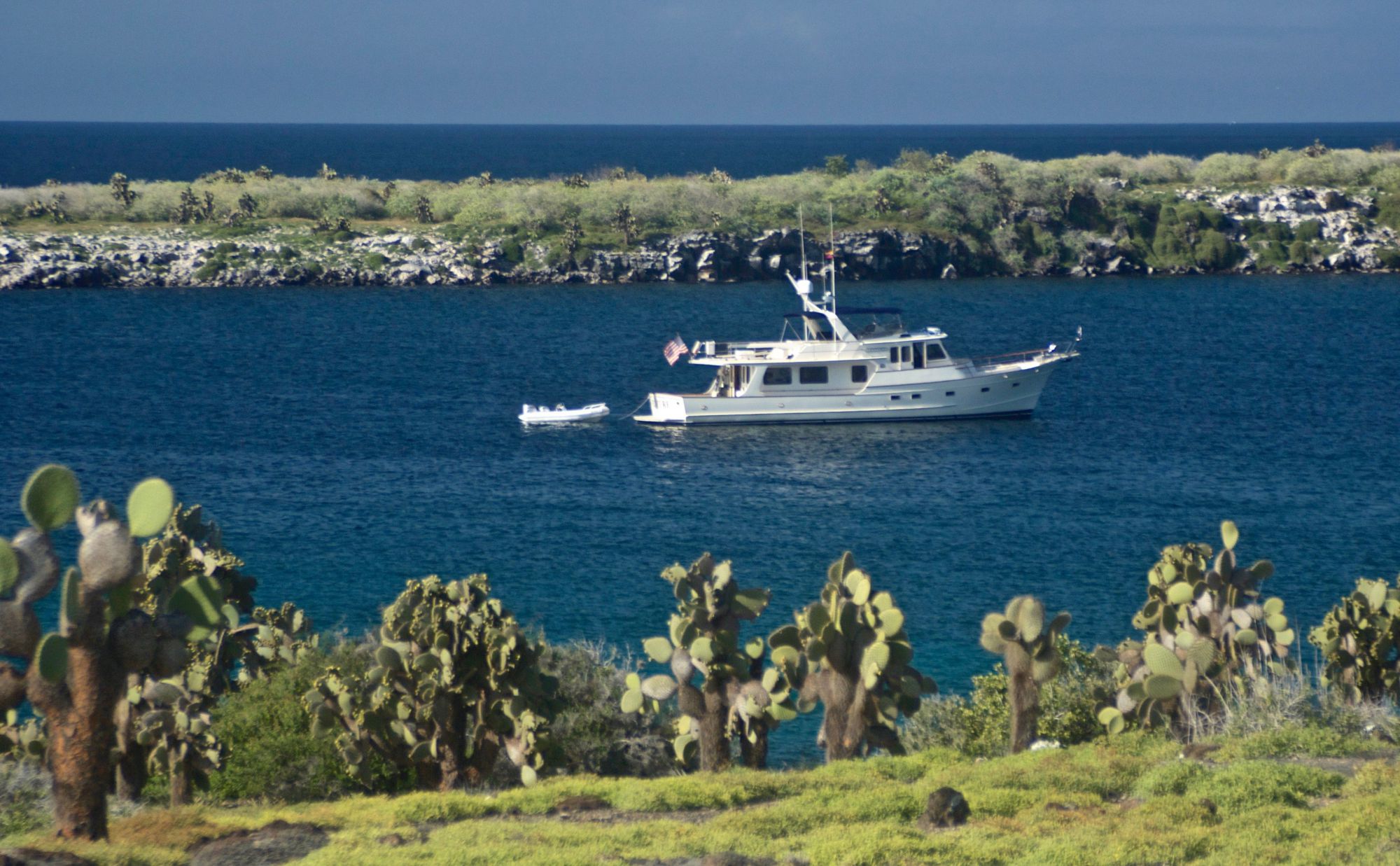 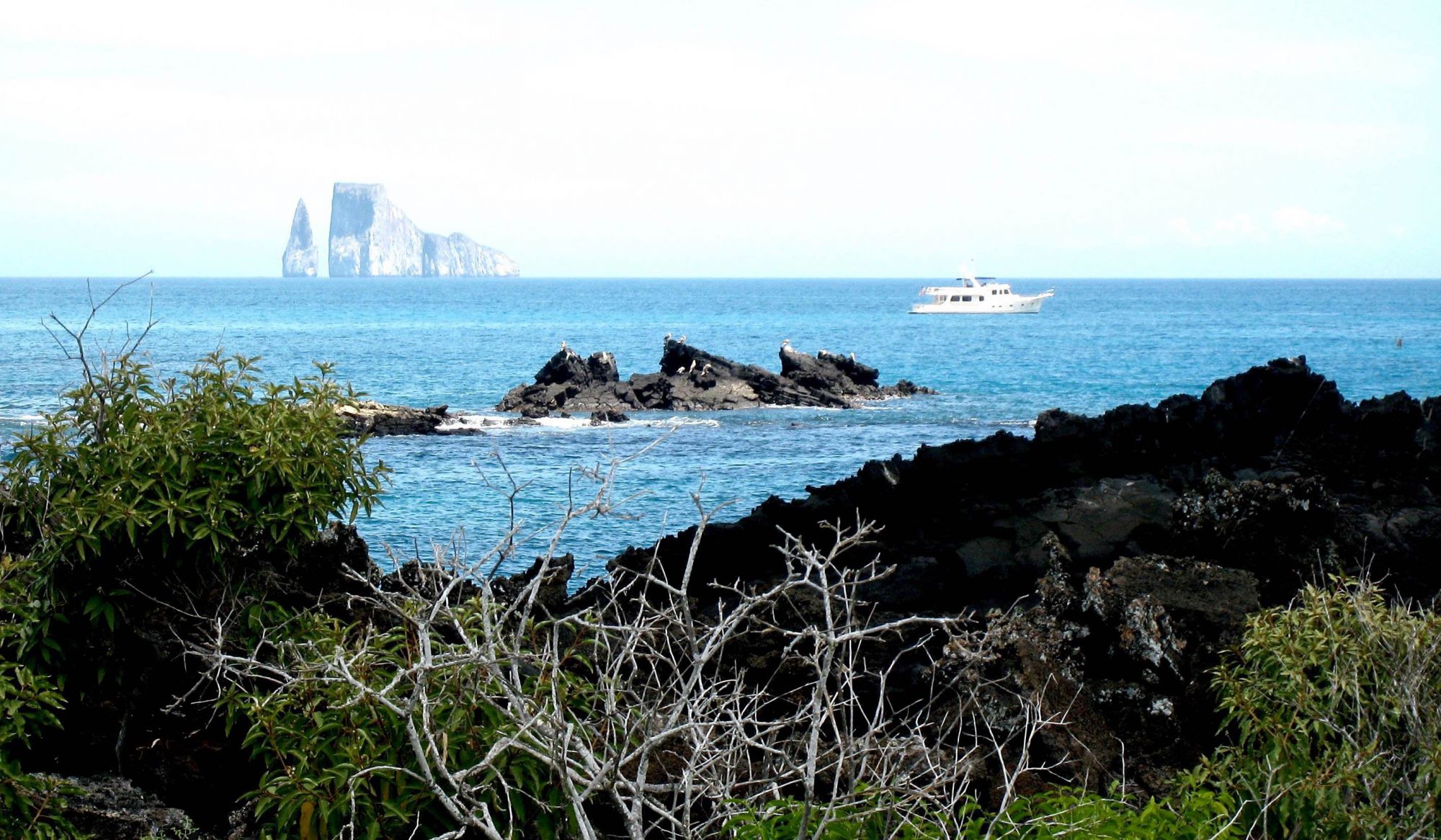 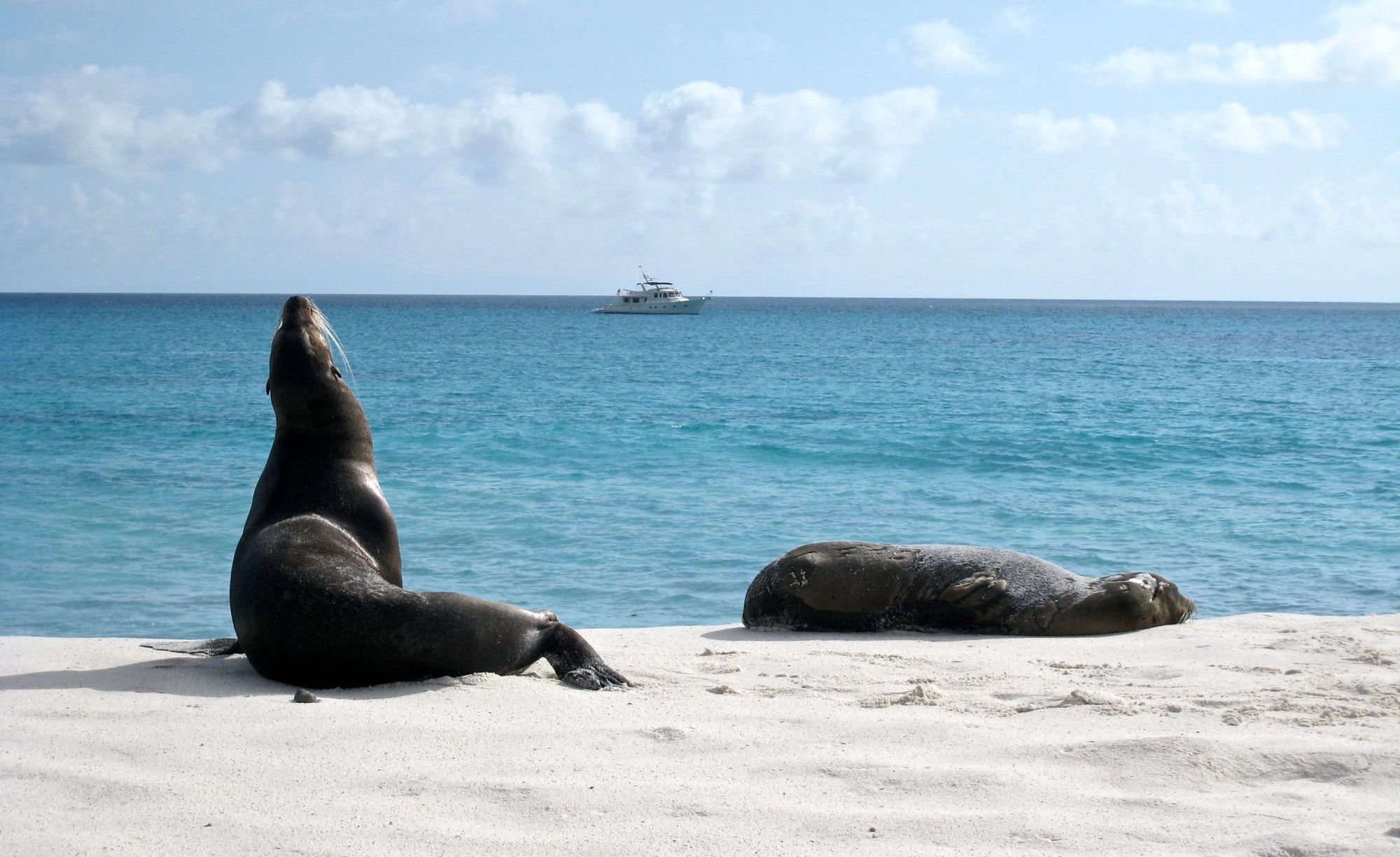 Can you spot three babes?

Being able to take the Fleming 65 – Venture to Isla del Coco and the Galápagos made this trip an exquisite adventure. The ease, comfort and ability to cruise from Los Suenos to Isla del Coco and on to the Galápagos meant that we were well rested for our island excursions and able to stick to a schedule. Since my first cruise of Venture in 2005 – and sailing thousands of nautical miles in Venture and Venture II – I have been able to enjoy nature’s pure delights and find ways to make Fleming the ultimate cruising yacht.