The Galeon 510 Skydeck is a new convertible flybridge/cruiser, the likes of which have never been seen in Australia.

The term transformer might naturally conjure visions of a self-configuring modular extra-terrestrial robotic lifeform – think of the 1980s animated series and spinoff franchise. The Galeon 510 Skydeck is perhaps not quite that curious a creature, but it is being called “the future of luxury yachts”, and if it proves itself in Australian conditions it may well turn out to be a landmark model for its size: eminently adaptable, replete with spaces that open onto nature, and featuring high quality materials and European craftsmanship throughout.

I had the chance to jump aboard hull number 62 of the innovative three-cabin model from Galeon Yachts on the Gold Coast, accompanied by Alexander Marine Australia dealer principal Todd Holzapfel who, this year, is excited to introduce the Polish brand to Australian and New Zealand markets, with the backing of Ocean Alexander’s Johnny Chueh.

One of the third generation of Galeon boats, this model came from the boards of UK-based Tony Castro Yacht Design and Italian studio Roberto Curtò Design, with significant input from Jacek Kobylko, the owner of the company (and son of founder Wieczysław Kobylko). Galeon’s in-house team took care of interior design. 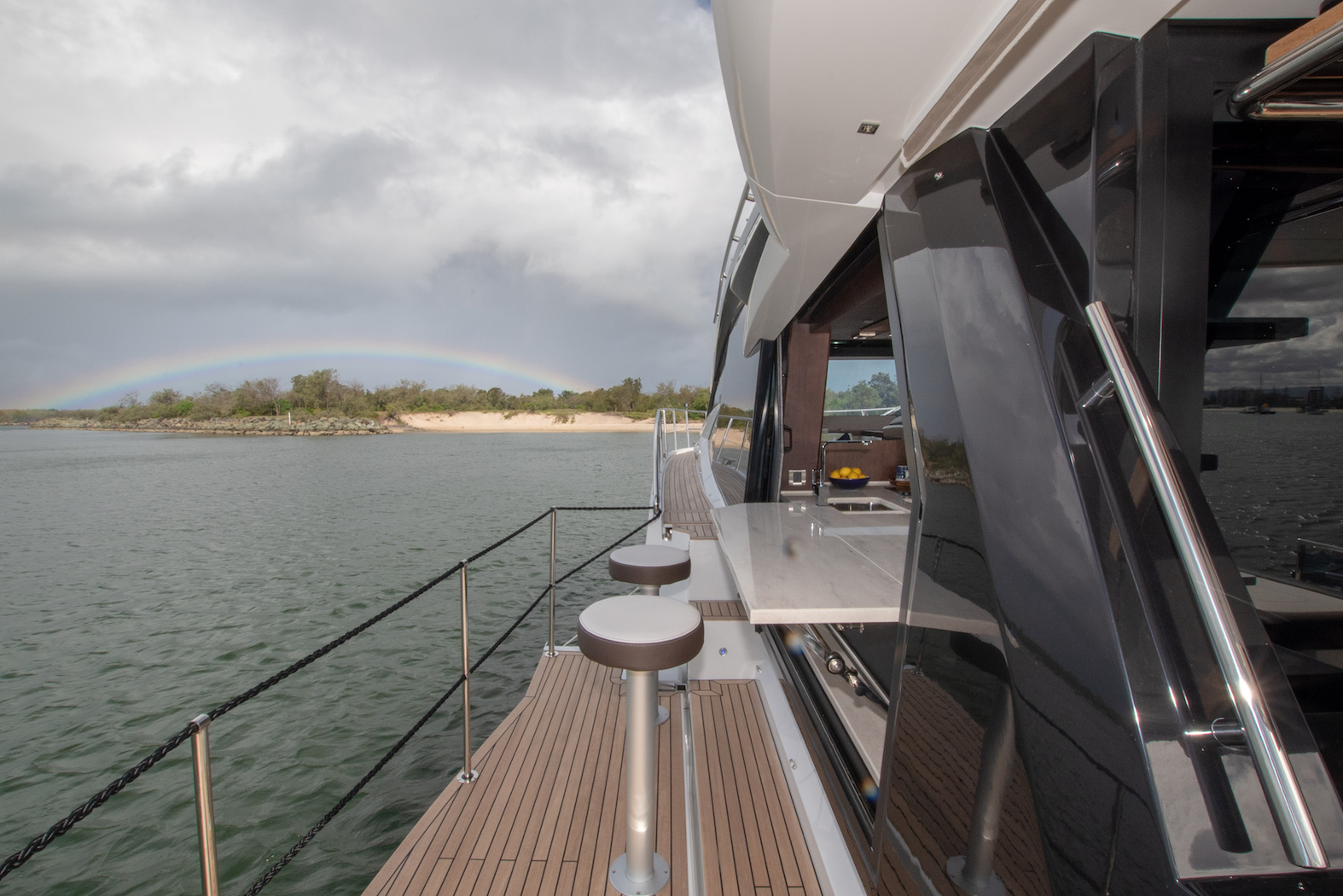 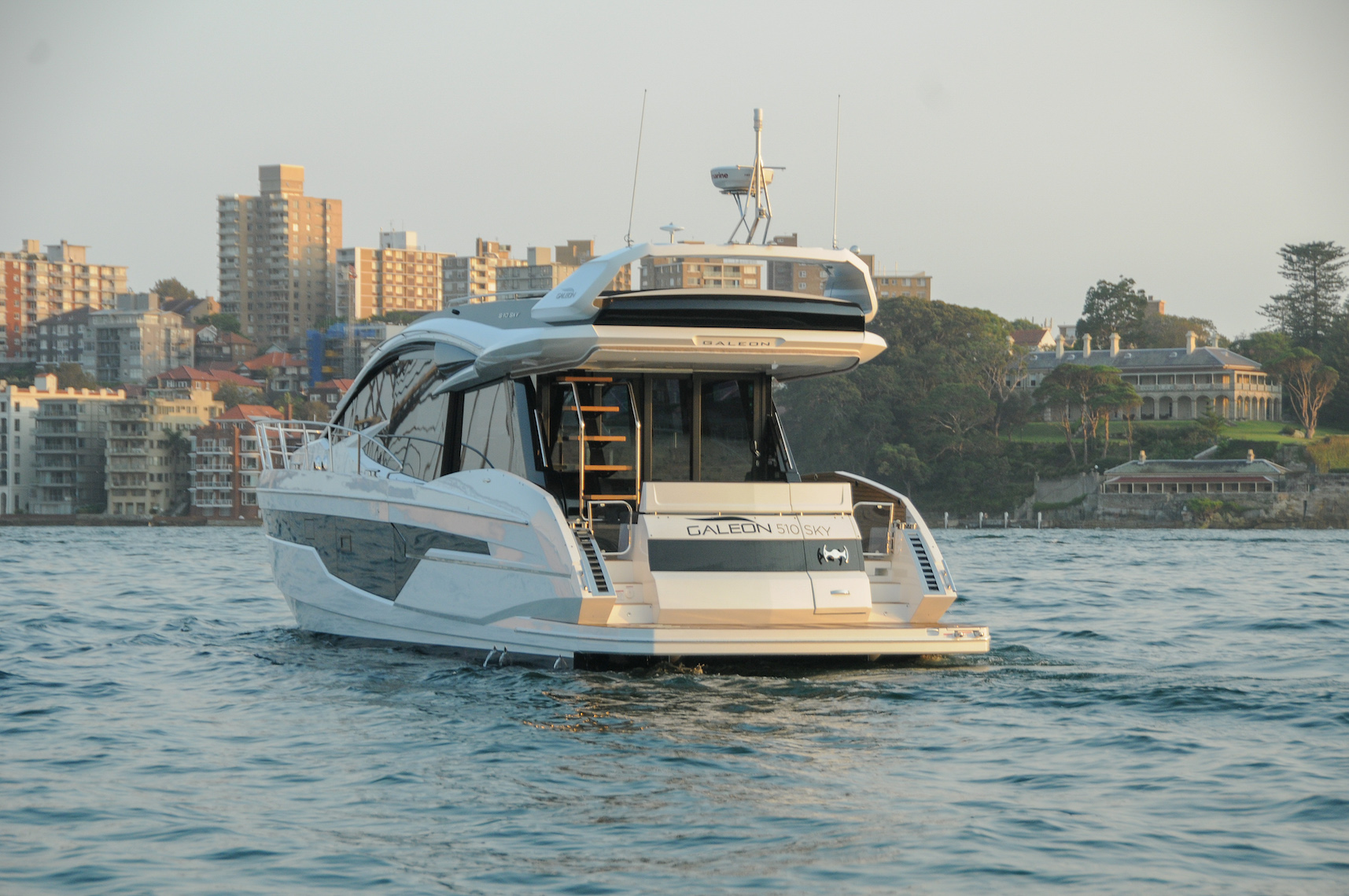 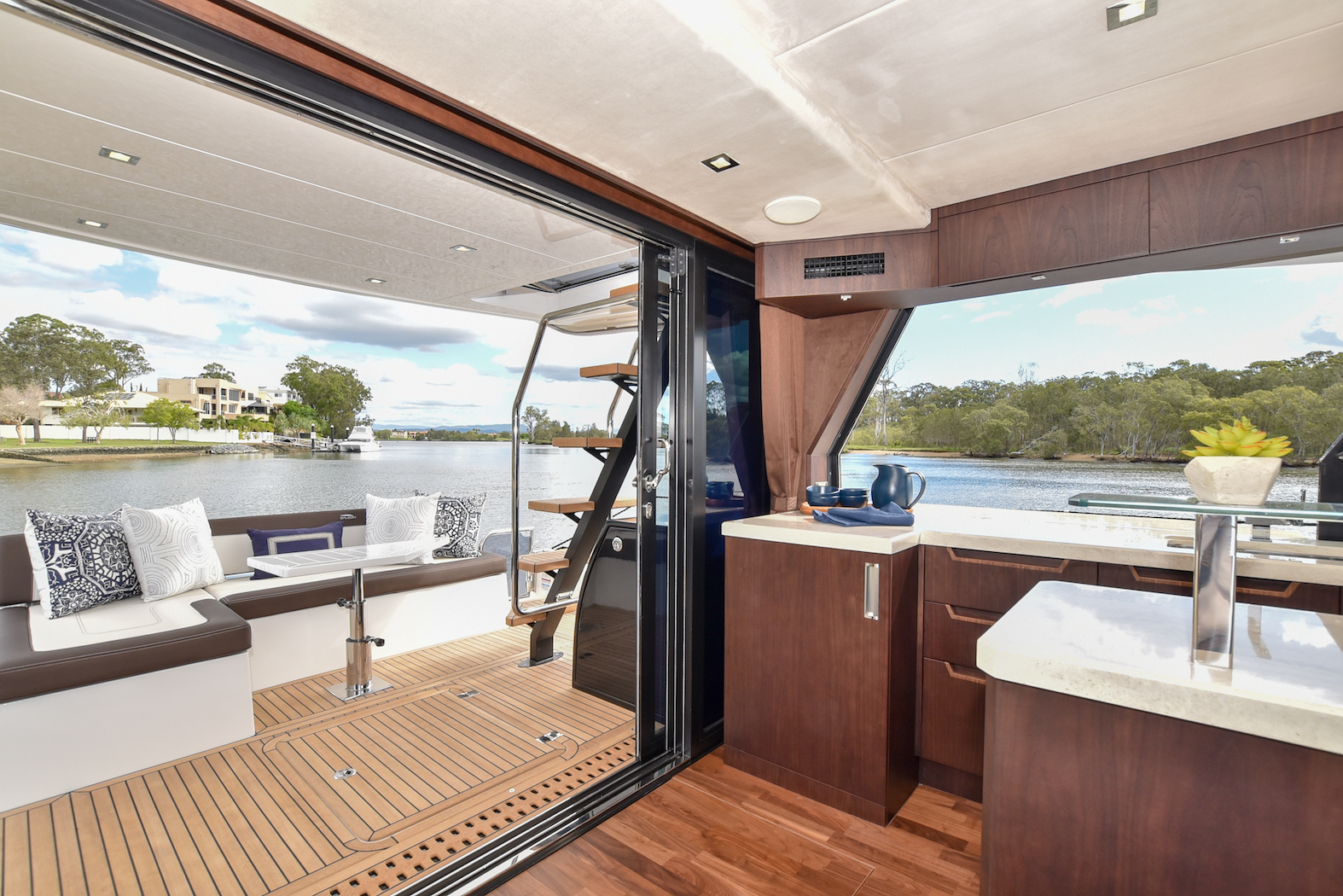 The real standout features of the model are twofold. First, and perhaps the less immediately striking, is the highly unusual open air upper deck that gives the 510 Skydeck its name. Is it a flybridge given the elevated helm station, or is it a coupe given its smooth, sporty profile? Potentially it is both at once, as Schrödinger would put it.

The key to the conundrum is an automatic soft top cover, not unlike those that convertible cars employ to connect their owners to the sky. “Have you ever seen a disappearing flydeck?” Holzapfel asks cryptically, and at the touch of a button, all is revealed – or rather, covered – by a black soft top (of Sunbrella fabric over hydraulically powered stainless steel ribs) that seals the helm station and sun pad lounging area as if it never existed, forming part of the exterior’s graceful curve.

You would never suspect that underneath that lean, assertive profile the skydeck seats seven, with a rating to 800 kilos, a full helm station with three spacious chairs, a hi-lo table and inviting lounge area. There is no stowing required, and the transformation process is quite swift – a little under two minutes all up. There are many reasons why boat lovers may not want a flybridge – perhaps they dislike the inevitable clears, or object to the dominant, bulky shape, or want to avoid a high centre of gravity. But with this level of convenience, why not revel in the best of both worlds?

The second extraordinary feature of this social butterfly – and one which is sure to draw envious, even confused looks at marinas and anchorages – is the foldout beach club, the first of its kind seen in this segment of our market.

With the push of a(nother) button, sections of both gunwales, port and starboard, fold out into neat cantilevered balconies to extend the usable cockpit width up from the beam measurement of 4.46 metres to six metres. Most foldout balconies have previously been seen only on superyachts, and in private spaces – not social hubs like this, and not at all on boats of this size. The feature was introduced on the 2016 Galeon 500 Fly, which has been a popular model among European and American owners.

Expanding the space further, when the wide side windows slide away, suddenly you have the ultimate entertaining zone: on the port side, two bar stools can be set up along with foldout bar surface, which effectively doubles galley bench space. On the starboard side, there is a sofa that can be configured to face the water – the perfect spot for a sunset cocktail and some tunes over the Fusion or Bose sound systems.

There are, of course, removable safety ropes, stanchions and safety pins in stainless steel – it takes a couple of minutes to set all these up, including the hydraulic action – and Holzapfel recommends using appropriate caution, i.e. keeping the balconies closed while underway. When they’re folded up, you’ve once again got the sleek profile you may need to fit into your berth.

The adaptability does not stop here – it is a recurring motif throughout the functional and living spaces. Hopping inside to the main deck’s gleaming starboard side helm station, there is a swivelling helm seat that turns 90 degrees to form an extension of the sofa when the helm’s not in use. Unfortunately this seat is not height adjustable, though the hi-lo lounge table is. The helm-side window slides open completely, which is both lovely for the added breeze and sure to aid with docking. Holzapfel says a docking remote would be an option, but you’re unlikely to really need it with both bow and stern thrusters – which come as standard – at the ready.

For more contact with the elements, the helm area also has a retractable sunroof panel that opens a swathe of sky overhead in 10 seconds, almost silently.

On the foredeck, the table can be stowed and lounge backrests folded down under a lid for streamlined cruising. There is an optional soft-top bimini shade system with carbon fibre poles ex-factory. Aft, the hydraulic hi-lo tender platform happens to double as a fine swimming platform, and its steps fold into a mini staircase, rather than ladder rungs – great for easy use by young and old alike. 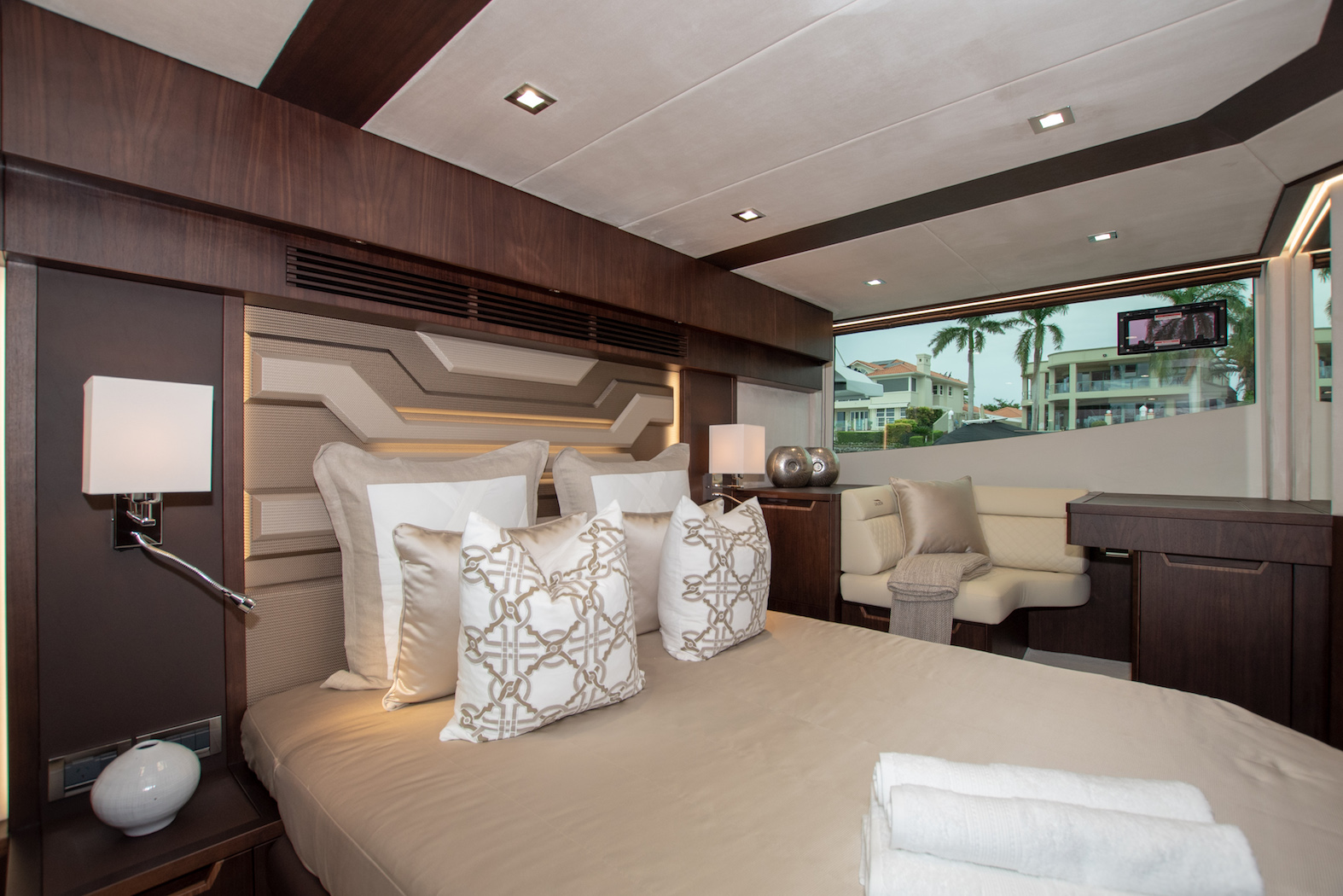 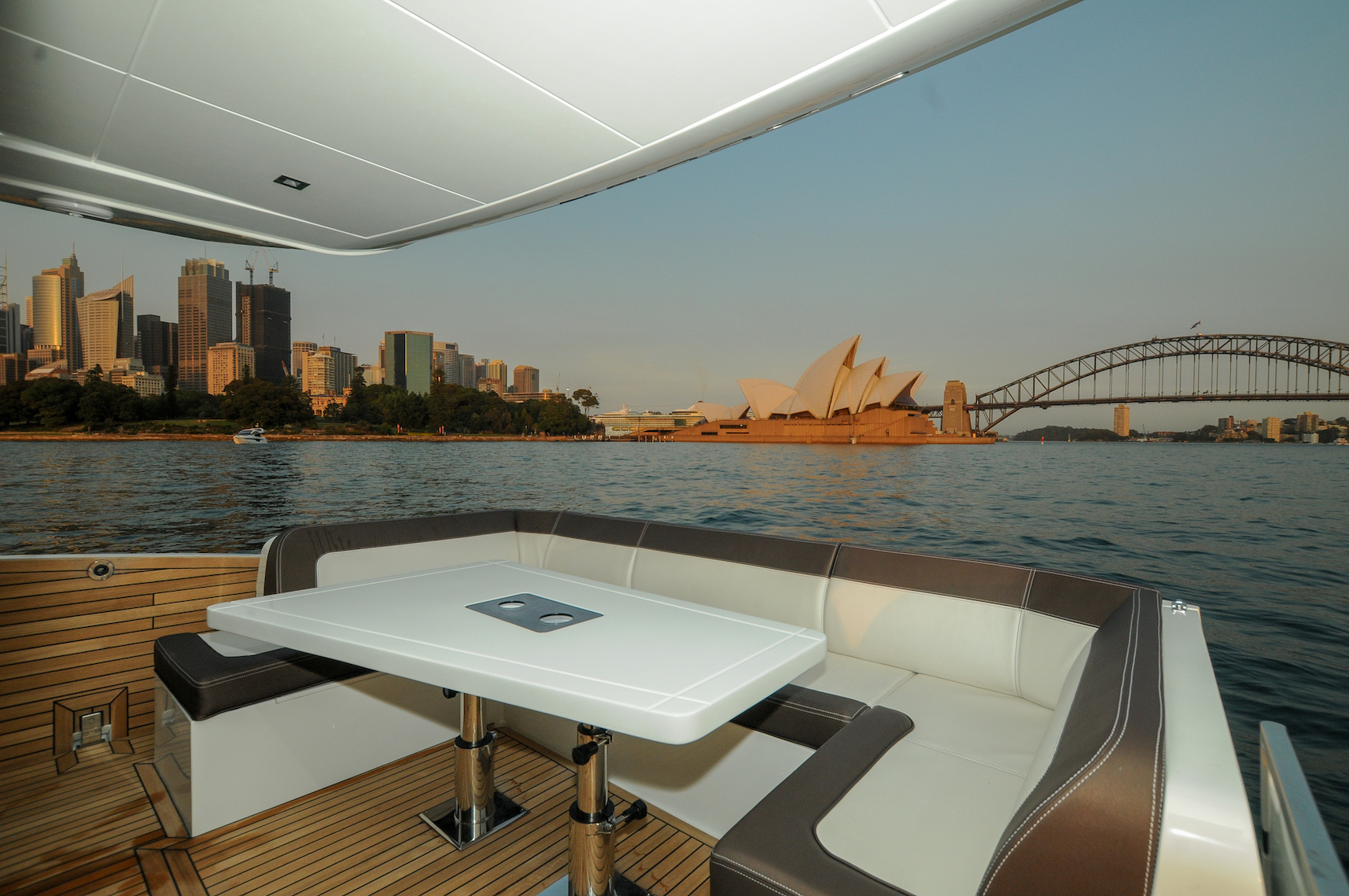 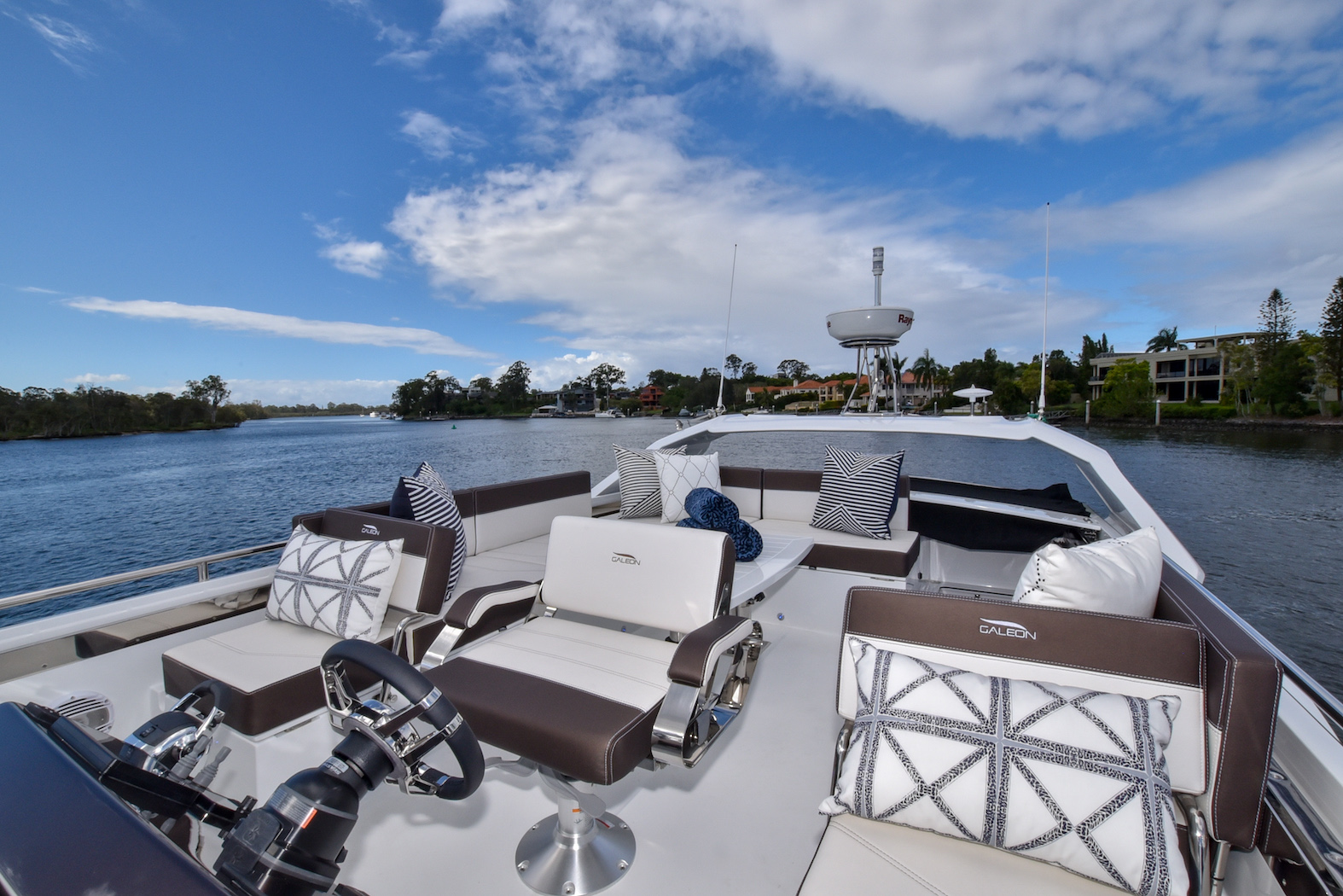 Australians tend to love an aft galley: a social space that connects the helm station and aft cockpit. This galley has plenty of thoughtful touches, like the dishwasher’s positive latch to make sure it stays closed at sea, the double sink with modern fixtures, abundant overhead storage, and matte walnut finish for the well-crafted cabinets’ veneers. The sliding glass door that divides the galley from the aft cockpit entertaining area has four panels, only one of which is fixed. In a smooth operation, they lock into place so that you can have one, two or three open.

One major concern for Antipodean users will be the refrigeration, as Holzapfel concedes that the Northern Hemisphere-standard solo bar fridge is unlikely to satisfy our needs – or, perhaps I should say, thirsts.

So for the heavily optioned Australian standard there will be an additional Waeco drawer fridge with 24-bottle capacity, accessible from the cockpit, plus an icemaker and watermaker all located in the handy aft cabin – which the Poles originally intended for use as either a tender garage, a crew cabin with ensuite, a gyro stabiliser locker, or a toy locker.

A level of lavishness unusual for a boat of this size is particularly apparent when you descend into the accommodation foyer with its leather-bound handrails and solid wooden doors. There are three cabins here, each well-appointed and offering ample storage space. The day head, complete with sumptuous mosaic tiling (another option Holzapfel made standard), Kerlite stoneware and caramel glass sink, is also accessible directly from the VIP stateroom.

Striking features of the full-beam master cabin and ensuite are the comfortable make-up and jewellery station or study, six-plus feet of headroom, recessed flat screen TV, hidden washing machine and dryer, and what is called an ‘enlightened bedhead’ – I won’t spoil the surprise.

The 510 Skydeck also has everything you’d expect under the hood: the engine room, accessed via a removable panel in the galley, hosts twin Volvo Penta D11-725 engines – these are the biggest possible for the space. There is an Onan generator selected for its low servicing burden, two fuel tanks holding 1,800L in total, and a Dometic chilled-water AC unit.

This GRP hull mould, which is shared with the Galeon 500 Fly, has a draft of 1.3 metres, meaning the cruiser will be perfect for careful manoeuvring around both reefed areas and sand banks such as those flanking the Gold Coast’s waterways, where we take the 510 for a spin. Sliding out at 9.7 knots towards South Stradbroke, we show an average 91L/hr fuel consumption on the Raymarine Multifunction Display. We reach a snappy 31 knots seemingly effortlessly, and with reasonably low noise levels. Holzapfel informs me that during the two-day delivery trip from Sydney to the Gold Coast, they punched into nasty weather the whole way, taking on a headwind and relentless two-metre waves yet still achieving a respectable 22.5 knots at 75 percent load, using between 175–190 L/hr.

The advantages of this model do not stop at cool gadgetry. There is quality imbued in the less flashy aspects too, seen for example in the inch-thick Burmese teak steps up to the skydeck, the lavish snowy carpeting throughout the accommodation, or the careful ventilation of the bowthruster box under the VIP cabin. High standards are partly attributed to an impressive level of vertical integration at the company’s two factories outside Gdansk. From stainless steel bow rails and cleats to teak milling, woodwork, carbon fibre fabrication and GRP hull moulding, almost every element is built in-house, allowing for cost-efficiency and stringent quality control.

All said and done, the Galeon 510 may not be able to defend the planet against Decepticons, but it certainly does promise to get the adrenalin pumping, and transform your favourite place on earth into a space that’s even more social, more open to sea and sky, and – ultimately – more liveable. And that’s enough to get anyone animated.