The superyacht Aurora arrives down under for the summer.

The 74-metre superyacht Aurora arrived in Brisbane at the end of November ahead of summer sojourn down under.

This magnificent, five-deck, privately owned superyacht is the first of its kind to enter Brisbane’s City centre, up the Brisbane River.

“Welcoming Aurora to the City Reach of the Brisbane River is an historic event,” said Rivergate General Manager, Andrew Cannon.

“Aurora is one of many international superyachts forecast to head to our shores in the next few years, taking advantage of all our region has to offer and generating revenue at many levels in the marine and tourism industries.”

The complex operation was made possible thanks to Rivergate with the collaboration of Maritime Safety Queensland, Harbour Master Johnathan Beatty and superyacht logistics consultancy, Foreign Flag Yachting.

Australian Captain Stephen Bay helms Aurora, ably assisted by a multinational crew trained to the highest standards. A veteran of two seasons cruising in the Mediterranean and the Caribbean, Aurora made the 12,000 nautical mile voyage to Australia virtually non-stop. 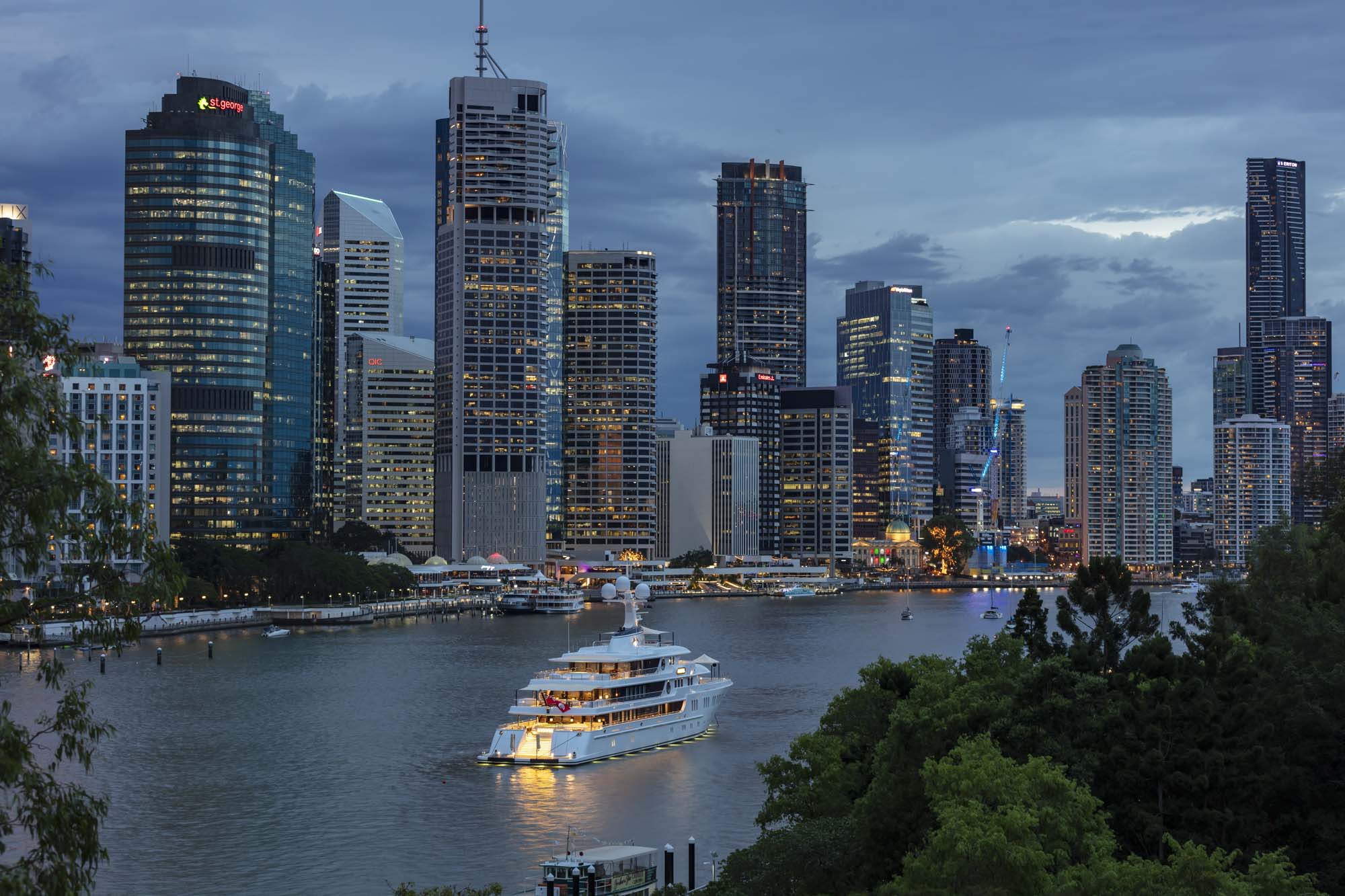 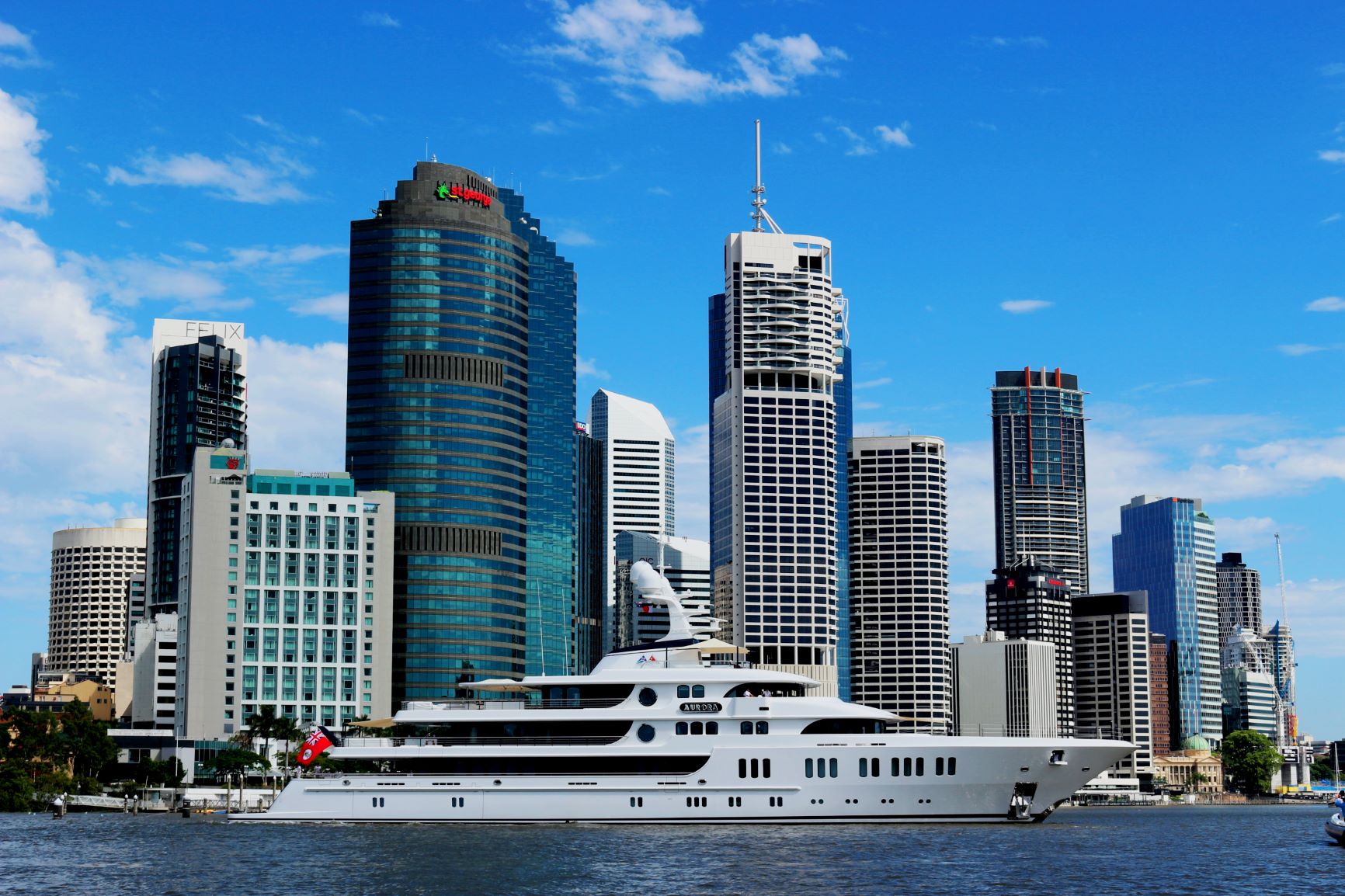 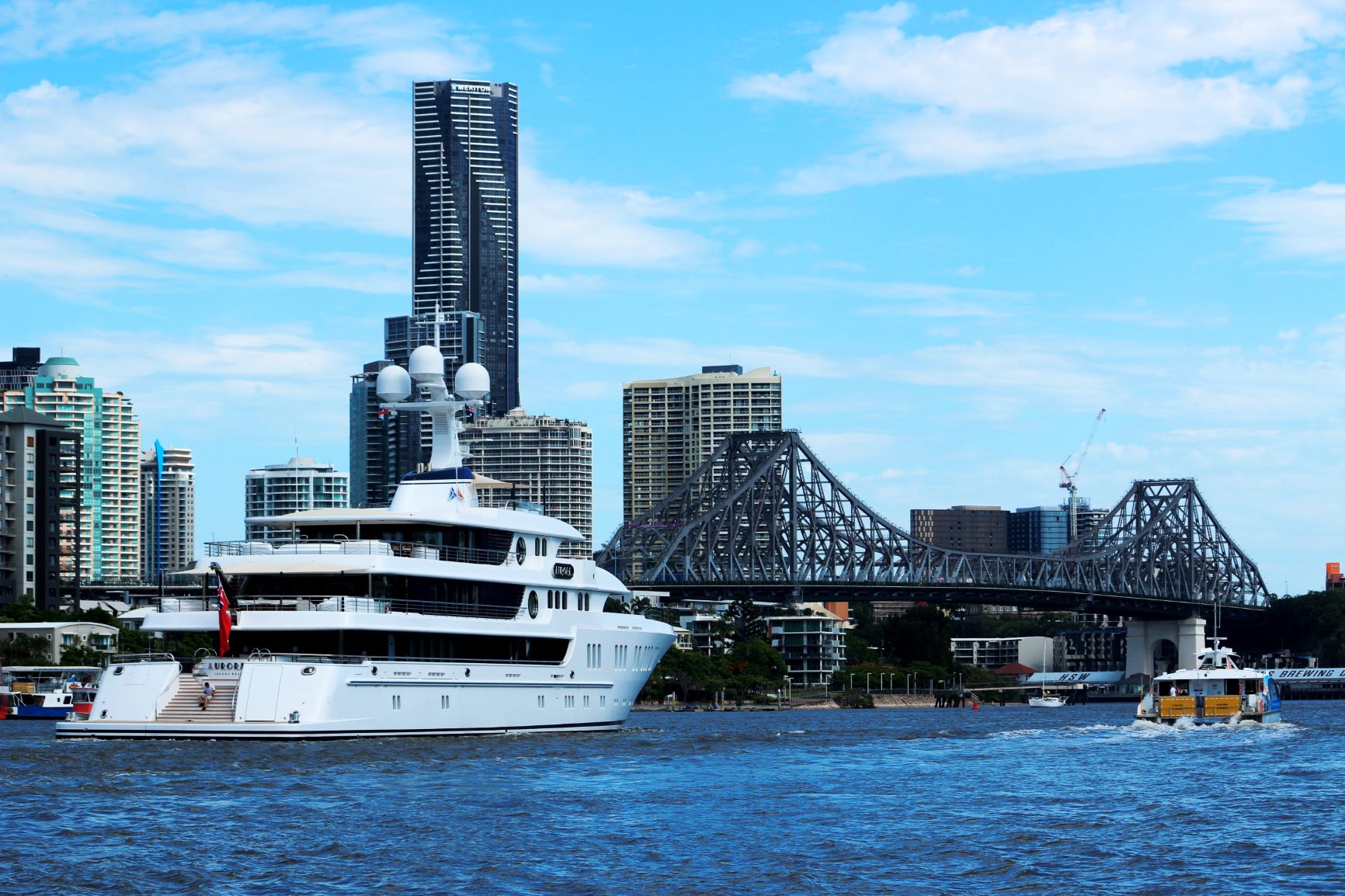 The epic voyage began in Barcelona in mid-October, headed to Albania, via the Suez Canal to Sri Lanka where they refuelled, then skirting Indonesia, around the top of the Gulf of Carpentaria and along the Queensland coastline to Brisbane’s Rivergate Marina and Shipyard – a journey of seven weeks.

“Asia, the South Pacific and Australia hold a definite allure for international superyacht owners,” said Captain Stephen Bay. “Australia is a long way from Europe and the US, but guests are looking for alternatives to the Med and Caribbean.”

Once here, the distances between cruising grounds such as the Whitsundays and Great Barrier Reef, Sydney, Melbourne, Tasmania and emerging destination the Kimberley Coast in WA means you have to allow plenty of time to cruise these iconic regions.

Aurora is now enjoying Melbourne after having enjoyed Sydney on New Year’s.

Aurora will spend the next few months cruising Australian waters.  “Australia is too big to do everything in one itinerary,” said Captain Stephen. “We will definitely look at coming back again.”

The 18-month old superyacht, which took three years to build, has massive fuel capacity of 240,000 Litres, giving it a remarkable range of 6,500 nautical miles, and a beam of 13 metres, making Aurora the largest volume superyacht in her class.

A high-tech, modern marvel, Aurora is as environmentally-conscious as she is splendid. Her onboard systems include low emissions engines, sound and vibration dampening, zero-speed stabilisers, glass crushing system, waste water processing and storage, plus watermakers, icemakers, refrigeration, freezers and copious storage for self-sufficiency at sea.

According to a 2016 Independent Economic Impact Study by AEC, the superyacht industry in Australia is estimated to support a total of around 14,500 full-time jobs worth $1.2 billion in wages and salaries and contributing $190 million per annum via foreign tourist/ guest and crew expenditure to the Australian economy.