Myanmar is known as the Golden Land – and for good reason. Everywhere you look, you are greeted with golden sunsets, stupas and smiles. Rivers glisten like gold, their banks dotted with small villages filled with shining temples, and at sunset the sun’s rays shimmer along the water’s surface.

Indeed, there is no better way to explore Myanmar’s golden heart than a cruise along its iconic waterways – the Irrawaddy and Chindwin Rivers. Myanmar’s longest river, the Irrawaddy flows north to south from its source high in the Himalayas through some of the nation’s most spectacular regions before emptying into the Andaman Sea. Best known as the ‘Road to Mandalay’, it is also one of the most popular destinations for Myanmar’s growing tourist market.

But for a chance to really experience Myanmar at its most authentic, a cruise along the Irrawaddy’s tributary, the Chindwin River is hard to beat. As far as rivers go the Chindwin is undeniably scenic. Steep banks of granite border the river, interspersed with rolling hills and verdant forest, occasionally revealing monkeys jumping along the shoreline. And considerably less traffic and much fewer tourists ensure that a journey along this largely unspoiled waterway is a truly magical one. 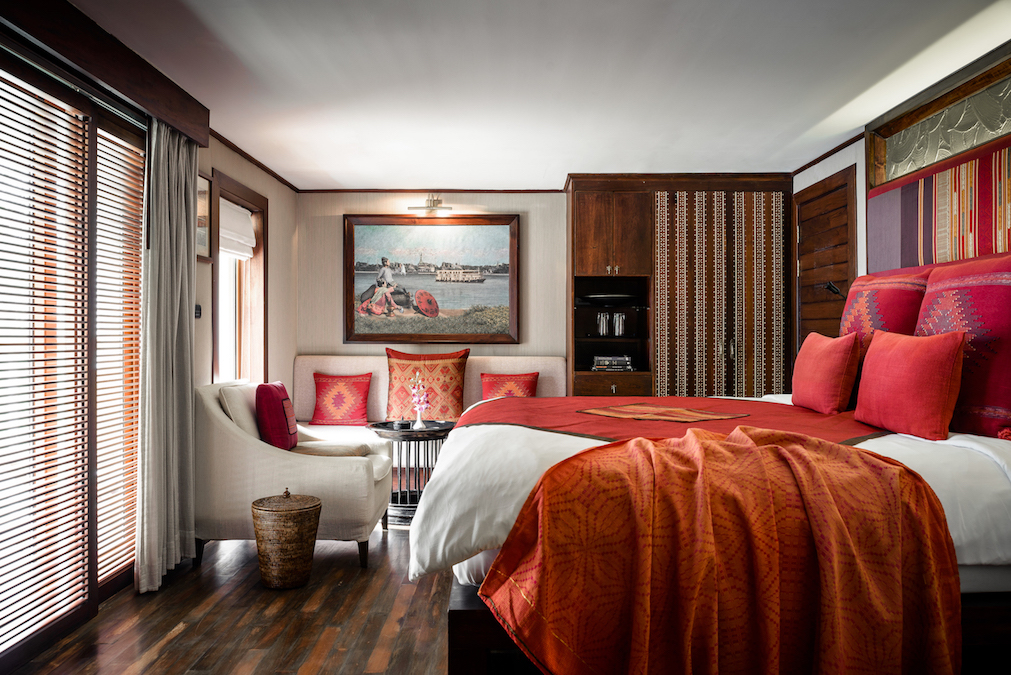 Monywa, the first major town along the Chindwin, is a popular visitor stop on overland travels and is best known for its Thanboddhay Pagoda, an enormous Buddhist temple covered with more than 500,000 images of Buddha. The town is also home to Myanmar’s largest likeness of Buddha, measuring almost 100 metres long by 27 metres high and housed in the stunning Bodi Tataung Pagoda.

There are also plenty of rural villages to explore along the way. Nestled at the foot of the dramatic Western Mountain Ranges. Kalewa, with its exquisite hillside pagoda overlooking the river’s placid waters, makes for an exceptional and atmospheric photo opportunity. Cruising further along the river’s jungle-clad stretches, the tiny town of Sitthaung is the perfect spot to relax and soak up the views of emerald green paddy fields, not to mention a chance to discover bustling markets and experience a traditional way of life, which has remained largely unchanged for hundreds of years.

Next up, beyond the village of Masein, misty blue and green hills rise high on the horizon interrupted by the astonishing sight of 28 whitewashed pagodas filing down from the crest of the hill towards the water. The number signifies the 28 Buddhas who have brought enlightenment to the world. and is a sight rarely seen by tourists.

But for something truly awe-inspiring and unique, a visit the cave pagodas of Po Win Taung and Shwe Ba Taungis not to be missed.

Carved out of the surrounding sandstone hills, the breath-taking setting is a highlight of any trip to Myanmar. The two cave pagoda complexes are believed to be over 300 years old and, together, comprise almost one thousand caves in which both the Buddha images and the thrones were carved out of living rock. Pass through entrances rimmed with traditional motifs of vines, flowers and figures of mythical beings, before encountering caves covered with exquisitely executed and ornately detailed 17th century frescoes, carvings and paintings.

After meandering through sleepy riverine villages and towns, most cruises conclude in the majestic city of Bagan where the Chindwin re-joins the mighty Irrawaddy. Regarded as one of the greatest architectural sites in Asia, Bagan was the centre of Myanmar from the 11th to 13th centuries, a period which saw successive monarchs build multitudes of massive stupas and pagodas, many of which still guard shores of the Irrawaddy today.

Luxury boutique travel operator Sanctuary Retreats, is one of a small number of companies to offer voyages along the Chindwin, taking travellers to places that visitors rarely see – through the jungles of the north, forgotten villages and ancient towns almost to the Indian border.

Custom-built using traditional Myanmar materials, Sanctuary Ananda combines all the comforts of 5-star contemporary luxury with the refined elegance of authentic Burmese design, with one of the highest staff-to-guest ratios on the river, offering up a truly remarkable and fascinating way to enjoy one of Myanmar’s less travelled regions.