The name might mean “finished”, but as Jeni Bone discovers, for one ecstatic, seafaring couple, the delivery of their exquisite custom creation M/Y Finito heralds merely the beginning of the next phase of their cruising ambitions.

Ray and Denise David are by their own account “normal, no-fuss people” who like fishing, entertaining, and country and western music. Developers from Darwin, they are both experienced boat owners who like nothing better than cruising the remote reaches of the islands around the Kimberley Coast or further afield to Indonesia and Papua New Guinea.

“We wanted everything on our boat to be functional and beautiful,” said Denise, who, with Ray, oversaw the entire build process of their Whitehaven 7500 Sports Yacht, M/Y Finito. From sharing samples and colour palettes via email, to four visits to the factory in Kaohsiung for tweaking and major modifications, they enjoyed being so hands-on.

“We started with a clean slate. We had no preconceived notions of what a boat should be, and were able to think outside the square,” she added. Denise did admit that her briefing procedure with Ryan Hanson and Jason Kao at the factory consisted of “waving my arms around, taking a tape measure and drawing my ideas on the floor. 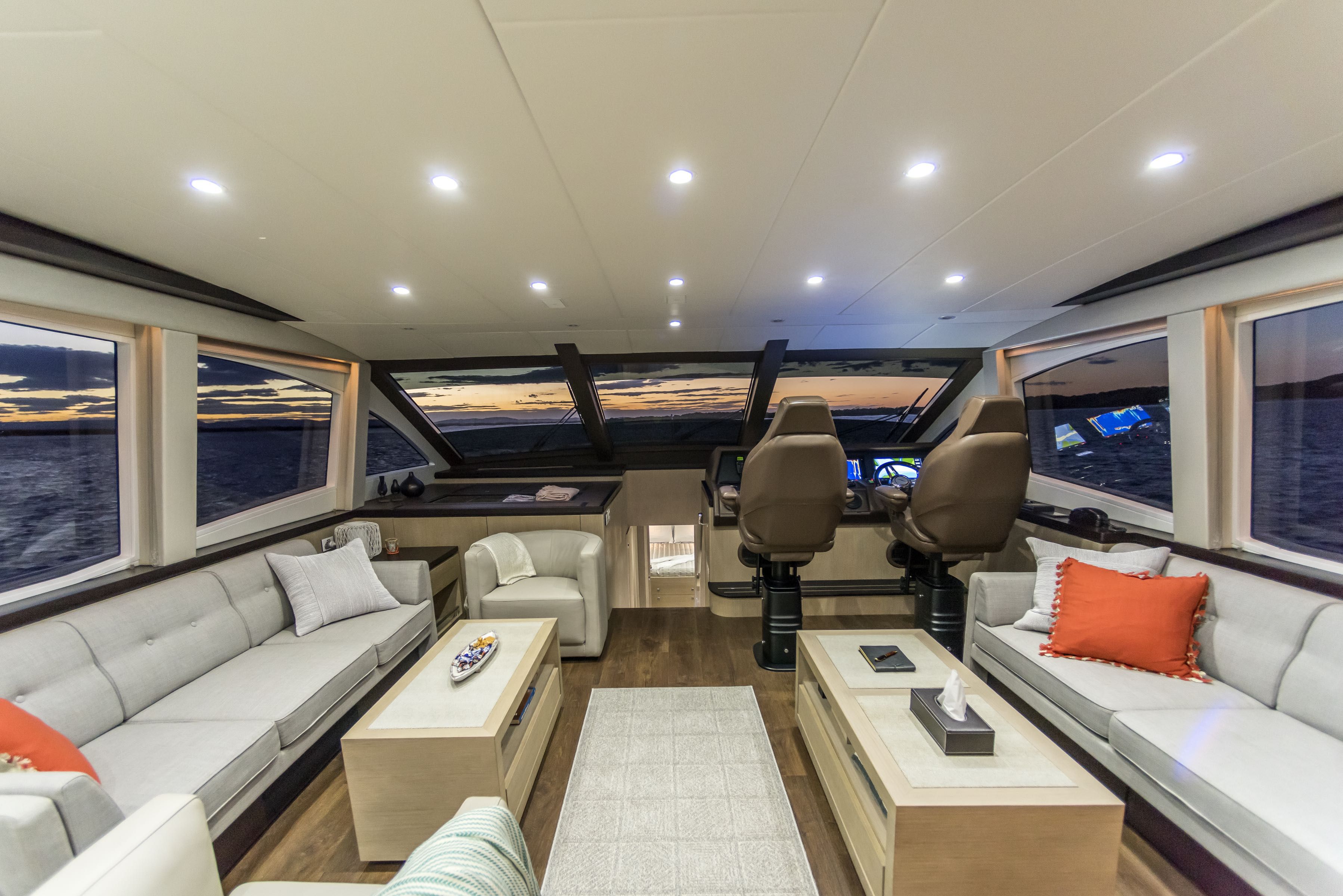 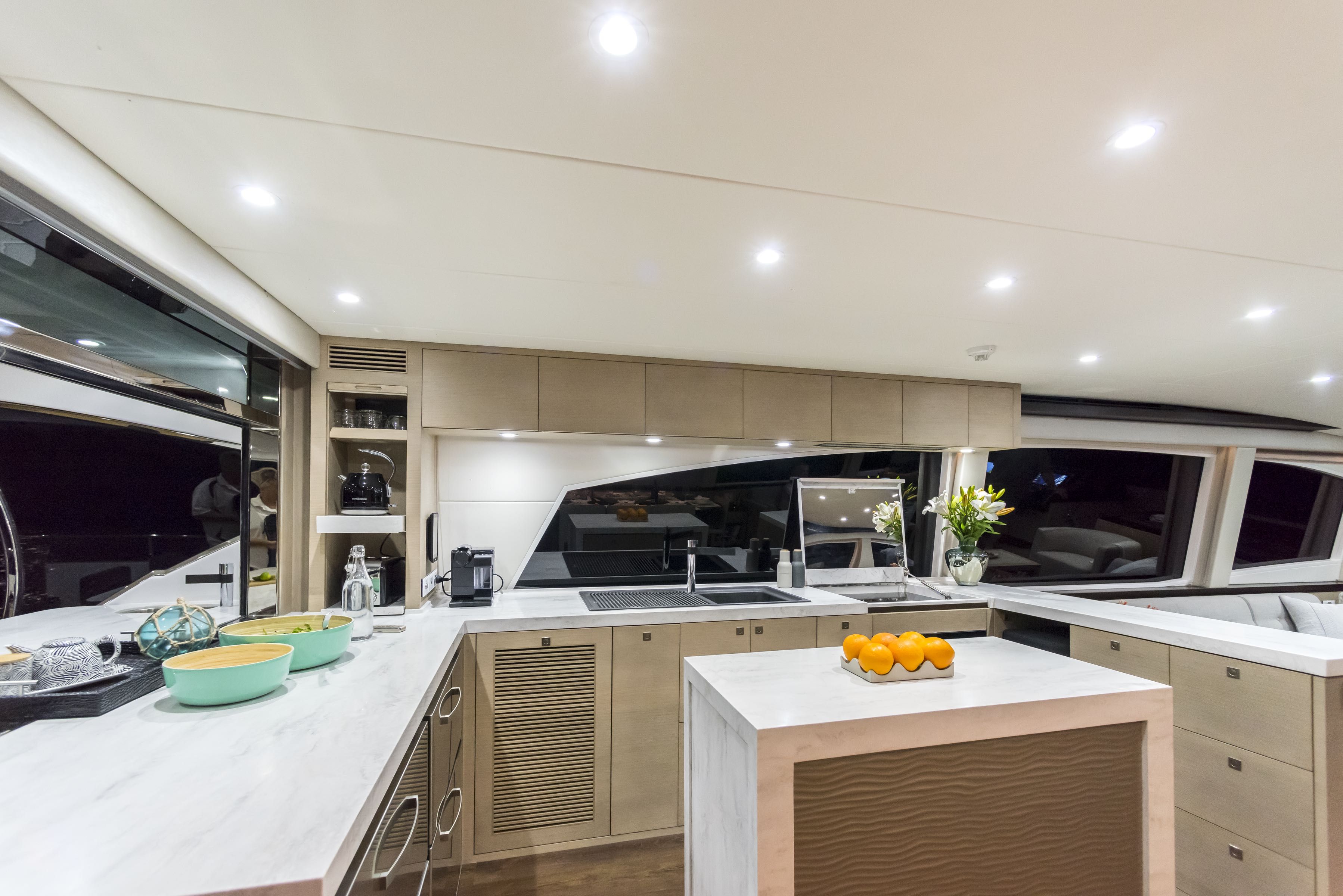 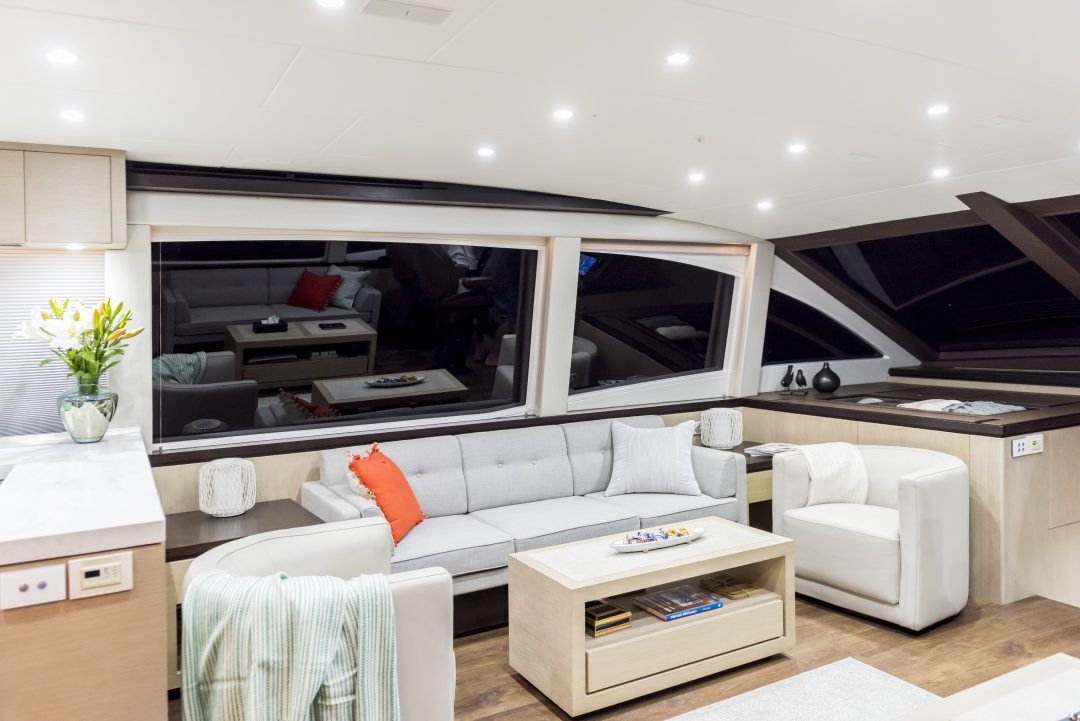 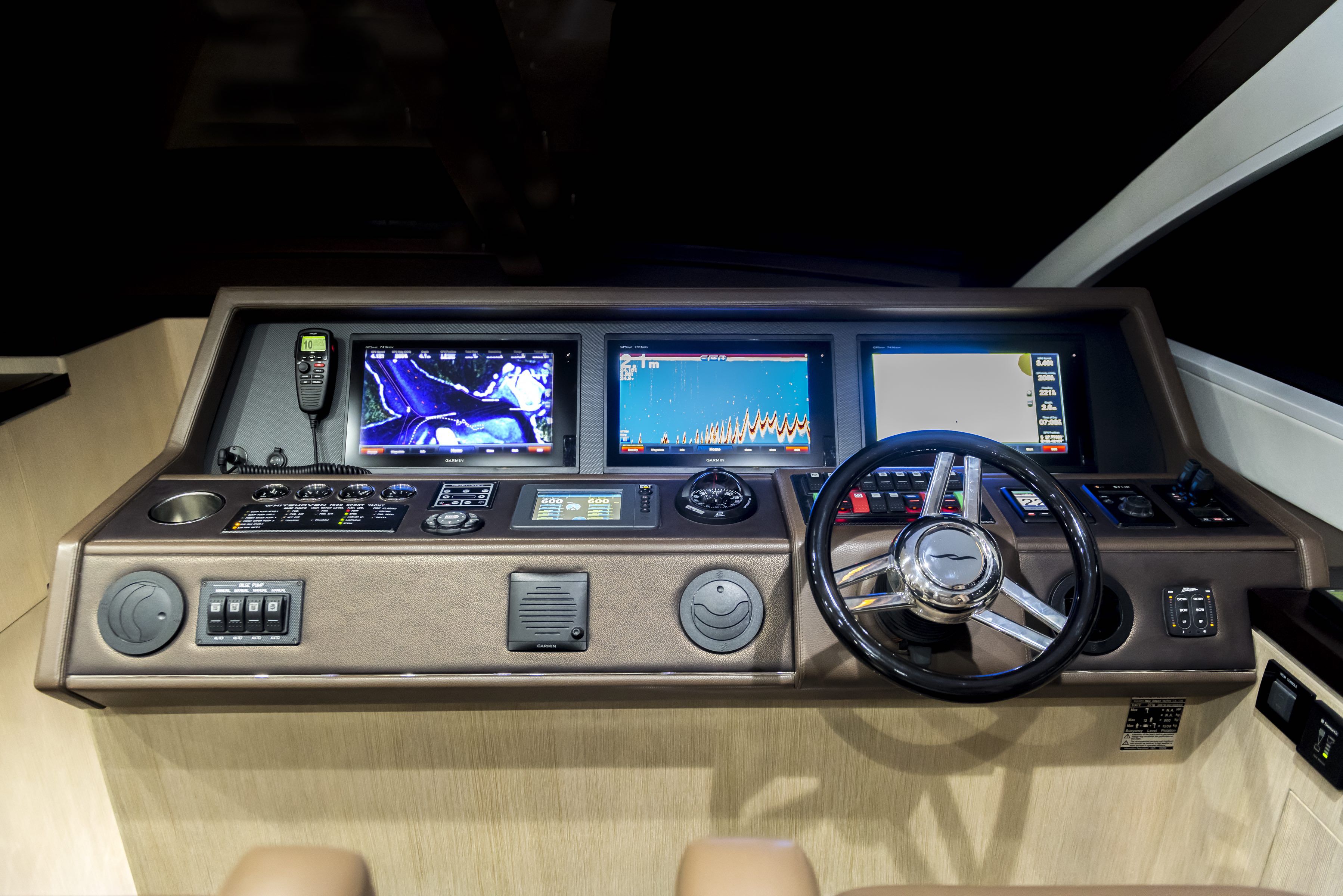 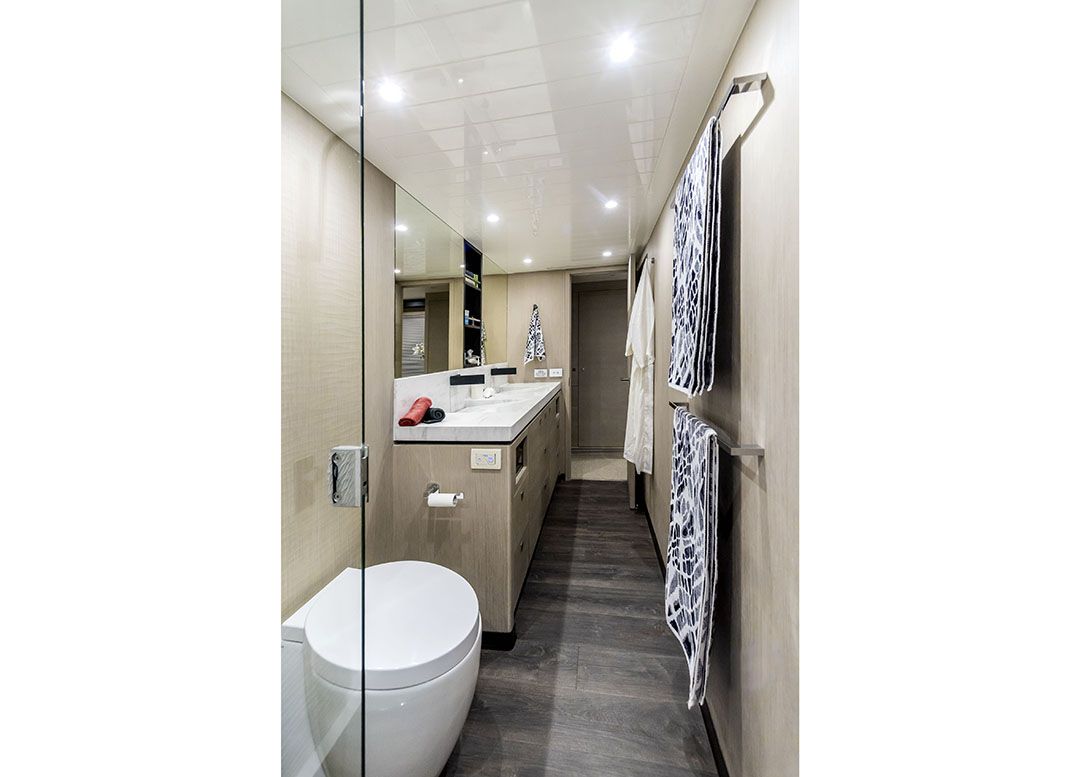 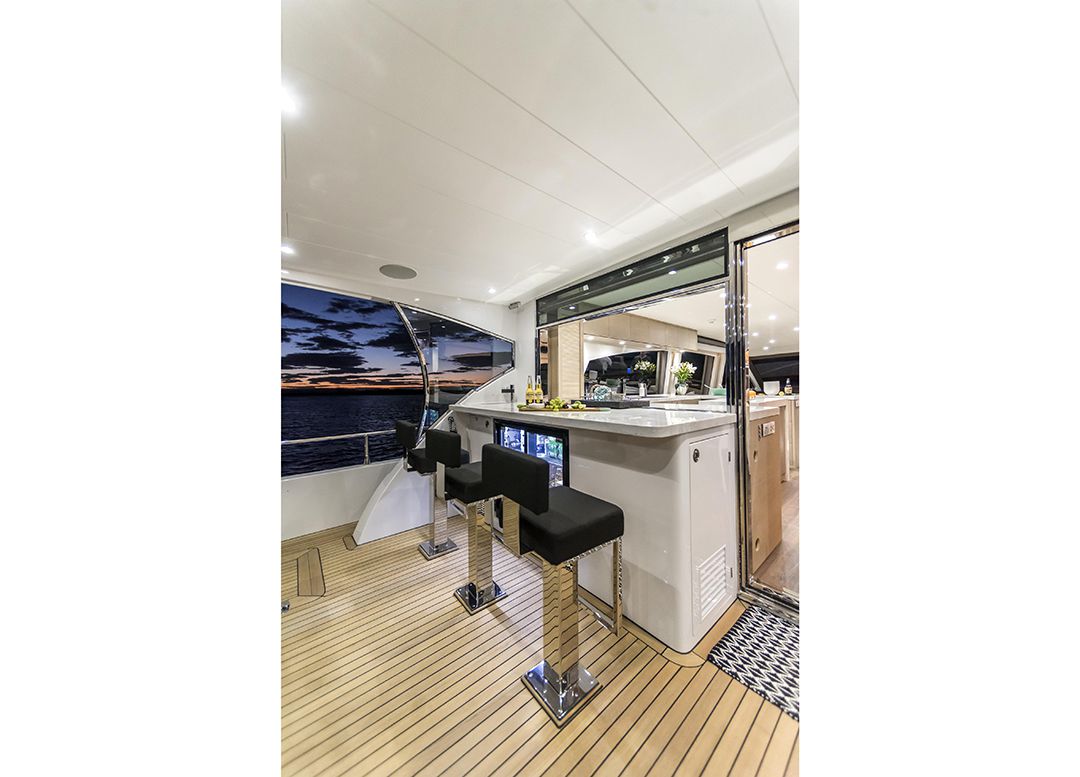 We wanted something that was our own style, beyond the traditional, with no limitations. Whitehaven gave us a free hand to do whatever we liked conceptually, and Keith and Ryan provided guidance on layout and engineering.”

Denise and Ray had previously owned a Whitehaven 640 Sports Yacht called M/Y Y Knot that they took ownership of in 2010, so were no strangers to the Whitehaven ethos and process. “It was such a great experience,” said Denise. “We were very comfortable doing it all over again. Our second Whitehaven, our final boat, is virtually an extrapolation of our previous boat, but a bit bigger to fit a bigger tender. 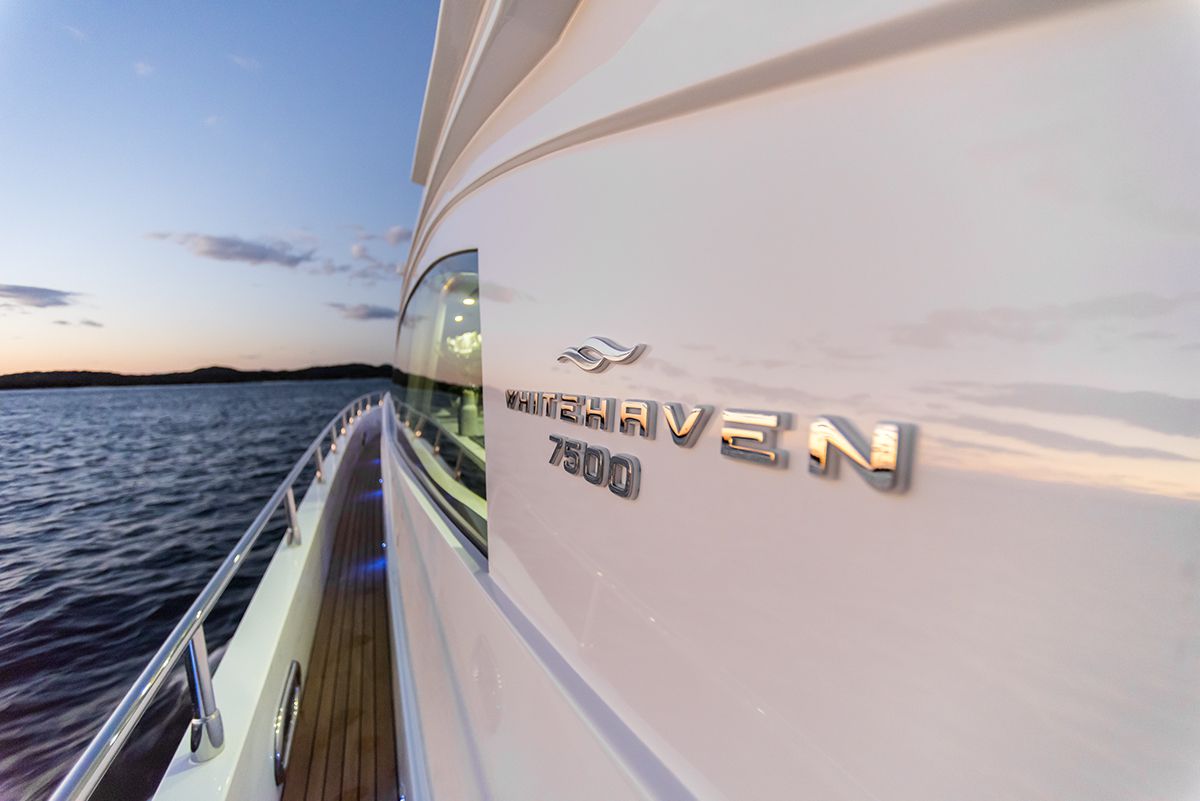 We have included all the features we had in Y Knot on this boat, with additional extras such as navigational and entertainment equipment.

The entire process took just 13 months from initial discussions following the 2015 Sydney International Boat Show to delivery in October this year. A justifiably proud Ray explains, “Everything is handcrafted in the factory. They made all the furniture from scratch, exactly how and where we wanted it.”

The advantages of building in Taiwan – using all imported materials and equipment sourced from Australia, the US and Italy – are myriad. As Whitehaven founder Keith Hanson revealed, “You can simply achieve a product of uncompromising quality and customisation that you could not do in Australia for the same price.”

He continued, “With Whitehaven, clients can access affordable craftsmanship – sometimes the result of two or three generations – and a tremendous breadth of trade skills in one place. It would be too daunting to try and get all those trades at one time in Australia, and the costs would be exorbitant. The team in Taiwan can work seven days and nights [a week] to meet a deadline and get the job done; and all with a great can-do attitude!

At the New Ocean factory where the Whitehaven Motor Yachts range (including the 6000 Series) is built, checks and balances are in place for stringent quality control. All work is overseen by naval architect Jason Kao and seasoned boat builder Ryan Hanson.

“As with every Whitehaven, owners can have as much or as little involvement as they like,” Hanson added. “Whether that’s a turnkey copy of an existing model, some personal variations to an existing boat, or a more involved approach working with the Whitehaven team to build your ideal boat that suits your personal style and boating lifestyle.” 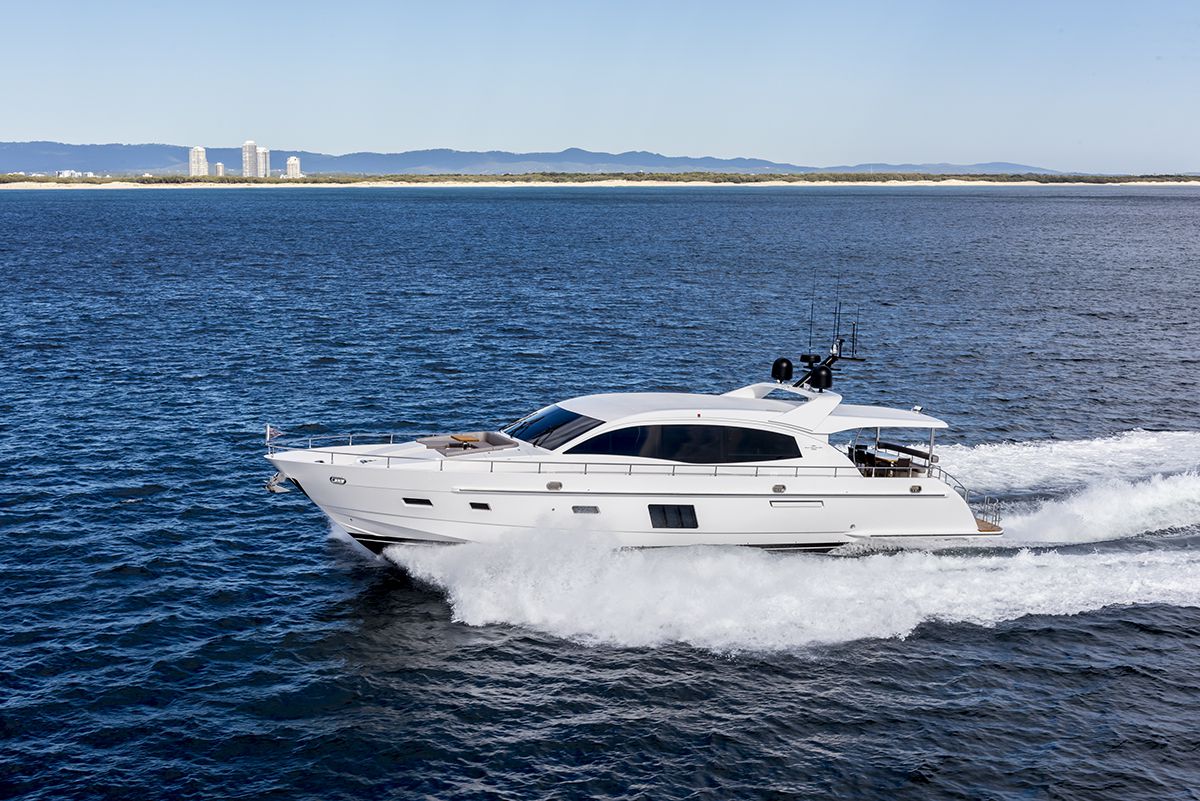 Finito was a labour of love, according to Denise. Featuring a single-level, open-plan living space for easy entertaining, it flows seamlessly from the interior to exterior and boasts a host of attributes that suit its use as a long-range bluewater cruiser in the tropics.

Its massive glazing heavily tinted to beat the heat and glare, Finito also boasts a 10,000-litre fuel capacity, which means it can roam for 1,500 to 2,000 miles in a stint to the Wessel and Tanimbar Islands, or east to the Louisiades Archipelago in the south-east of Papua New Guinea.

The aft hard-top awning has been extended for complete protection during the heat of the day, and for drinks while watching the stunning Top End sunsets, while the foredeck has been designed with a table and seating to truly savour the panoramic views.

Because they boat in croc country, the Davids’ tender of choice is a four-metre fibreglass Haines Hunter Sea Wasp with the stabililty and hard bottom to handle any waterway from mangrove and coral cay to rocky shoreline. Impressively, the four-metre tender is housed in a large, purpose-built, fully enclosed garage accessed via a clever hydraulic door from the extra-large swim platform. From here, the watertight door leads to the capacious engine room.

Dual bait boards can clip in to the cockpit railing, and there is extra freezer and storage space for bait and the anticipated haul. A Southern Stainless barbecue is a necessary inclusion for cooking the fresh catch of the day.

The supremely spacious aft deck has expansive seating for 10 or more, as well as a barbeque, fridge and bar complete with three stools. Manufactured by Aerotech, a unique electric up-down window opens to the galley.

The air conditioned comfort of the saloon is preserved with the one-touch electric sliding door, also from Aerotech, which ensures smooth passage for guests juggling glasses. 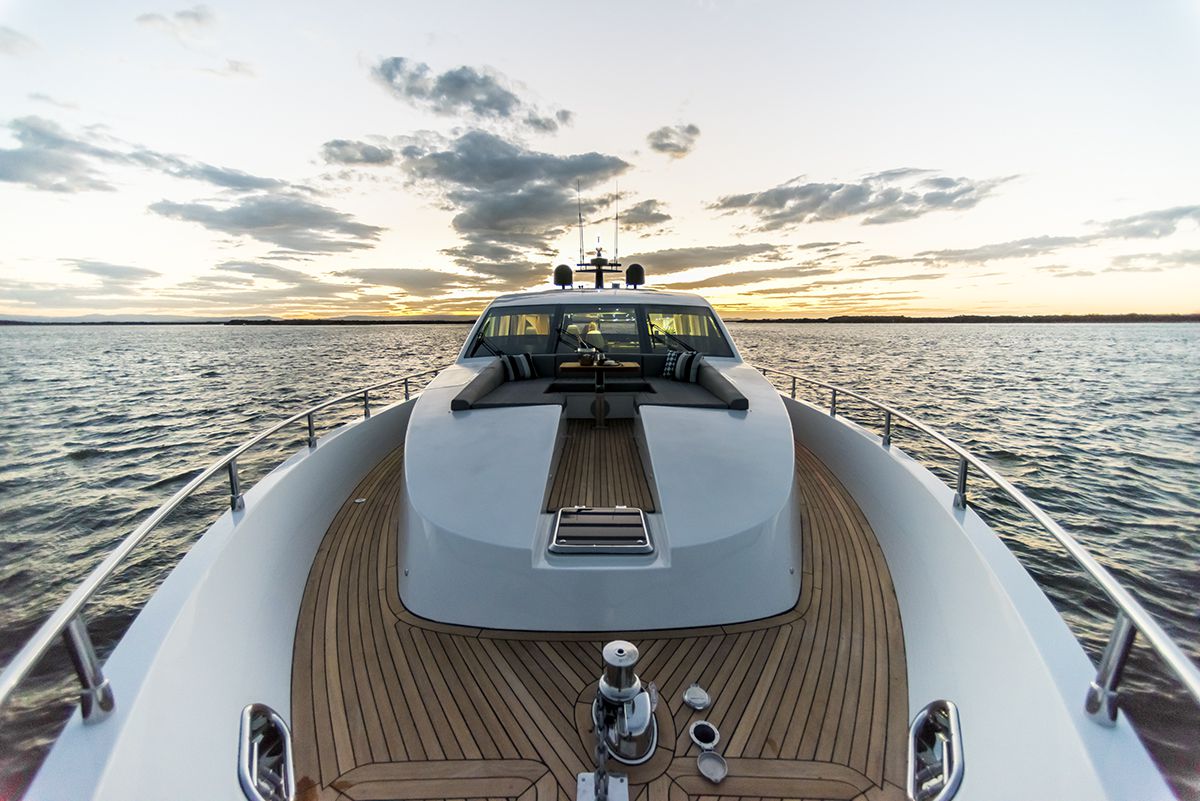 The interior is a study in masterful design and impeccable craftsmanship, a harmonious blend of practical inclusions and aesthetics that intrigue at every turn. The saloon, galley, lounge and helm form a unified whole, an inviting social space with massive wraparound windows. Seated, guests will appreciate that all the furnishings are below the eyeline for unimpeded views.

All furnishings were custom made, including the elegant, freestanding, round-edged eight-seater dining table. “We didn’t want a poky dining area where half the group is squashed up against the wall,” said Denise of this work of art. “It’s full size with heaps of room for people to circulate and spread out.”

The beautifully designed and well-equipped galley opposite is an entertainer’s dream, with all appliances concealed behind practically appointed smooth cabinetry, with large galley island and expansive Corian®benchtops that can cope with spills and rugged use.

The lounge area is inviting, with its custom-made seating and coffee table with mock stingray inlay made of leather, textured to replicate the much more costly and delicate material. Top-of-the-range, Italian leather Besenzoni helm seats can swivel to face the dining or lounge areas, adding to the convivial vibe.

Flooring is a commercial-grade, timber-look vinyl. As Denise pointed out, “It’s lightweight, nice under foot, and easy to fix if anything happens.”

Below decks are the three sizable suites, including the lavish master that makes optimal use of the full beam, with king bed, chaise longue, desk, vanity, robes and marvellous ensuite with twin marble, angle-flow sinks, full-height shower and portholes for sea breeze and views.

The decor comprises hand-chosen elements such as textured timber, large feature panels of handwoven Italian leather, corrugated white, genuine Versace tiles that Keith discovered in a non-descript shop in Kaohsiung, combined with the restrained and skilful use of space, light and storage.

A feature carried over from Y Knot is the second galley that doubles as a utility area, including Fisher & Paykel appliances stowed neatly under Corian® benchtops, while under the staircase lie 1,000-litre freshwater and blackwater tanks. A five-kVA inverter generator powers the galley refrigerator and fridge drawers. 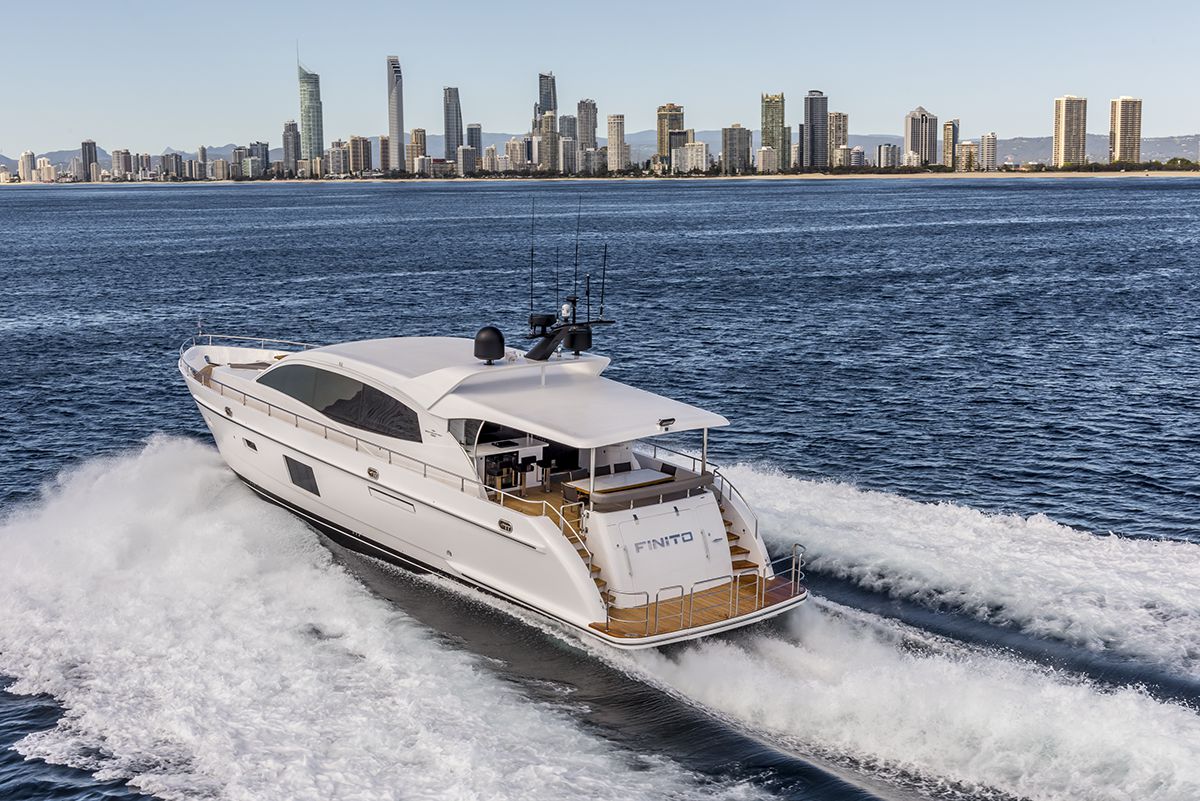 STATE OF THE ART

The engine room is air conditioned and as beautiful as it is practical, with its seven-foot ceiling height and logical layout, all specified by Ray, who is totally at home surrounded by his workbench, rods, deep freeze and impeccably labelled systems. The watertight door provides assurance in rough conditions.

The 240-volt electrical set-up was designed to Australian standard by electrical marine surveyor Peter Fowler of Benson & Brown. For propulsion, Finito uses two Cat C18 ACERT six-cylinder engines each running 1,150hp. And while the boat can achieve a 24-knot head of speed, at a more reasonable 10 to 11 knots over long distances, fuel consumption is about 64 litres per hour.

“We could easily do 120 miles per day at 10 knots, gliding between anchorages from 5am to 5pm. It’s comforting to know that this boat uses the same amount of fuel as our smaller boat,” said a very satisfied Denise.

Of particular note is the state-of-the-art Twin Disc QuickShift® transmission designed to interface with the Twin Disc EC300 MGX Electronic Control System. Added to that, there are three Express Joystick System stations, one at the main helm and one to each side in the cockpit.

“Ray and Denise experienced the technology first-hand at the 2016 Sanctuary Cove Boat Show on the Twin Disc demonstration boat,” recounted Keith. “We were all convinced by the Twin Disc QuickShift transmission, coupled with its EC300 propulsion. The Express Joysticks are a sheer joy to use and make docking and manoeuvring simple and user friendly.”

Finito can be controlled conventionally through the EC300 dual leverhead station right up to full speed, while the joystick is best for docking and travel or manoeuvring at slower speeds of up to 10 knots. “This is ideal in the case of Finito,” added Keith. “The joystick and positioning system are perfect for Ray and Denise. In Darwin, they have to take their boat through a series of locks and this system gives them precise control and manoeuvrability in a relatively confined space.”

After taking possession of Finito on the Gold Coast, Ray and Denise plan to cruise north to meet family at Hamilton Island, no doubt fishing and crabbing wherever they drop anchor.

“It’s been an enjoyable journey so far,” said Ray, musing on the entire process over a prawn roll and cold beer from the comfort of the cosy aft bench seats.

Given the effort, input and emotional involvement, was it all worth it? “Absolutely! We got exactly what we wanted and we wouldn’t change a thing!”

Straight from the fish’s mouth

Straight from the fish’s mouth