He recently spoke with Scott Alle about his path to success and preferred way to enjoy boating: island hopping with family aboard his Benetti 93, Liberty Call.

Thailand has been very good to John Stamp.

Originally from London, he has forged a successful business, the JST Group, supplying specialist services and products to the oil, gas, and power industries across Southeast Asia.

The JST CEO and founder is talking to me from his office in the company’s JST Tower in the bustling Suan Luang district, not far from the heart of Bangkok. The wide-ranging conversation covers his life’s passions – family, business and boating.

Stamp is astute and sharp but also self-effacing, with an old-school way of drawing out a yarn or anecdote in a gravelly voice that reminds me of certain members of the 25 Sydney Hobarts club. 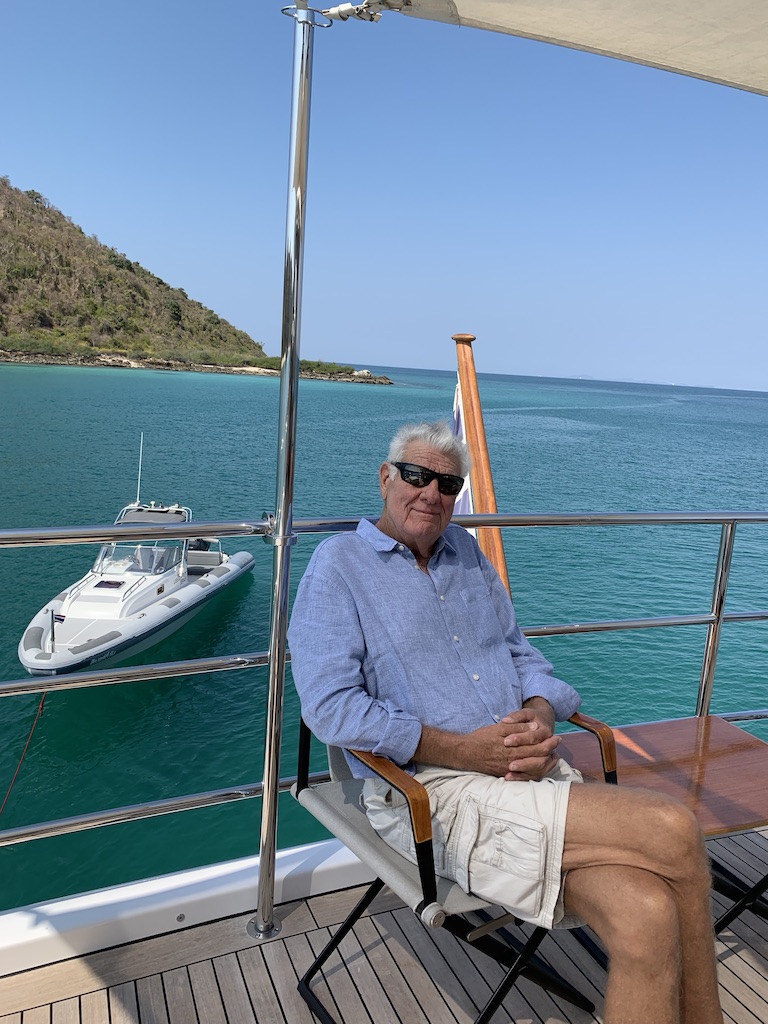 I ask him about The Londoner, the brewing house popular with expats and locals that he thoughtfully installed on the first two floors of the JST building. Described as a ‘family friendly sports pub’ with big screens for soccer matches and a terrace, it even offers London beers brewed on the premises.

“My commute to the pub is about 60 seconds,” Stamp confides. “If the lifts are busy it can stretch out to two minutes,” he says ruefully.

How The Londoner came to its new digs reveals something about Stamp’s can-do approach. Originally opened in the dark days of the 1997 crash, and despite predictions of doom, it immediately flourished. But after 15 years, a proposed exorbitant rent hike left it with an uncertain future.

Stamp simply decided to move the Bangkok institution he started to the new headquarters of the JST Group. A bigger, better version of The Londoner opened in 2016 and Stamp, as owner, personally welcomed many of the customers back.

The move was a resounding success and a testament to Stamp’s work ethic that’s taken him from humble beginnings in post-war Marylebone, London to the owner’s stateroom of an Italian superyacht.

John Stamp’s parents weren’t wealthy. They didn’t own a boat, nor knew anybody who spent their leisure time yachting. It was a hard upbringing, difficult enough that John sums up the motivation for his success as: “My desire and prime objective has been to put as great a distance between me and poverty as possible.”

By age 20 he was on his own journey, arriving in New York and working for welding giant Eutectic Welding Alloys Company.

After living in various locations around the South Pacific and Asia including Sydney, New Zealand, The Philippines, Taiwan and Hong Kong, he ended up running Eutectic’s Southeast Asia operations for them.

“I used to spend my life on the plane,” Stamp remembers. “I started JST in 1983 and then went independent in 1988. We’ve had our ups and downs, but we’ve done pretty well.”

As for the big lessons in business: “I worked 80 hours a week for the first five years.”

The company is now a global operation under the umbrella of JST Holdings of which JST Technical Services is the original and still biggest component. His brother Derek is Chief Operating Officer of JST, but as founder John is still in the office every day, though he admits to leaving “a little earlier” than he used to.

And who would blame him in escaping Bangkok’s congestion and smog for a head-start on a weekend aboard Liberty Call, his Benetti Delfino 93, purchased only a few months after completion in 2015. 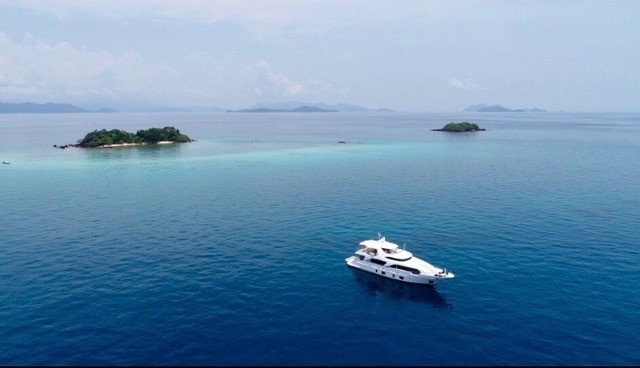 Liberty Call’s highly desirable cruising attributes are extremely well suited to weekends and longer sojourns in the Gulf of Thailand.

The exterior lines feature large expanses of glass to allow John, his wife Laura, and their guests to take in the hundreds of kilometres of coastline stretching south of Bangkok to the Cambodian border, and the more than 60 islands dotting the eastern waters of the Gulf.

The boat’s huge sundeck has an al fresco dining area fitted with a barbecue, fridge and icemaker, while an electric sunroof provides shade when required. The six-person Jacuzzi on this deck is a custom design by Benetti, especially for the Delfino series. Twin MTU V8 2000 engines give Liberty Call a range of 1,670 nautical miles at a cruising speed of 10 knots and zero speed stabilisers ensure a smooth stay at any anchorage.

“The key point is the layout,” John emphasises. “There’s a place to sit in the bow. There are three dining areas – one in the flybridge, one in the aft cockpit and one in the saloon – great if it’s raining. The best thing is that Liberty Call is made for use in Thailand, meaning we can use the boat 12 months a year. Our flybridge is open, it suits this kind of relaxed lifestyle and that’s where we all sit,” he says. 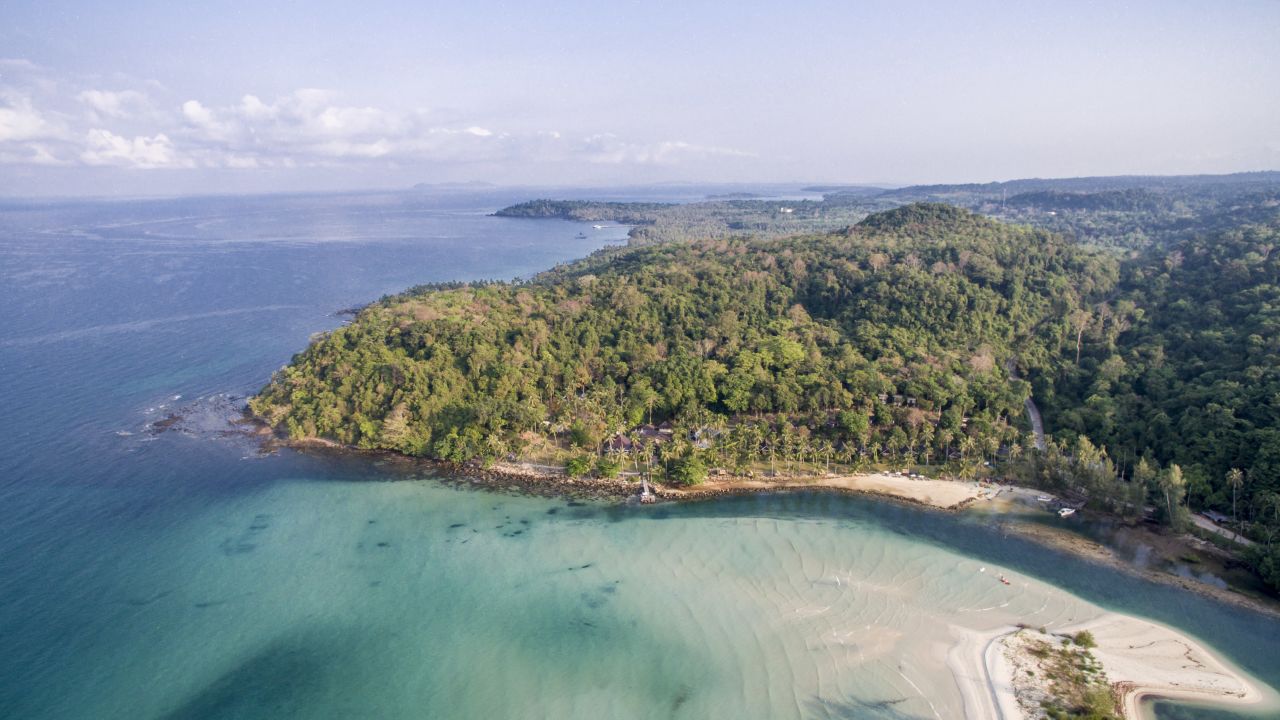 As the boat is operating most weekends, there is an extra rigorous maintenance schedule. Though, as John puts it, it’s far better that Liberty Call is out and about rather than languishing in a marina like many of her counterparts in the Med.

Thailand essentially has three main island groups, comprising nearly a thousand individual islands. Best known are Phuket, the country’s largest off the west coast and other islands in the Andaman Sea, Koh Samui on the other side of the peninsula on the western side of the Gulf of Thailand, and the lesser known islands on eastern side of the Gulf including the Koh Chang archipelago, which are the favourite destinations for John and his family.

“Because I’m still working we normally head out to a little local island which has six different places to go,” John explains. His international crew consisting of a Kiwi captain, Filipino stewardess and Thai deckhands have Liberty Call prepped and waiting, the lines are cast off and it’s time to kick back and take in the multiple delights of the cruise.

“The feeling of being out at sea, the fresh air on your face, getting some sand between your toes on a deserted beach and opening a bottle of champers. It’s just a wonderful experience,” says Stamp.

For Stamp the highlight of the cruising year isn’t a tour of the well-frequented party hot spots but a leg south to Koh Kood, or Koh Kut, Thailand’s fifth largest island.

Koh Kood’s beaches, rainforests and waterfalls are the featured attractions of the island. In 2014 The Guardian described it as “Thailand’s last unspoilt island.” There aren’t many roads traversing its 111 square kilometres, so a private yacht and its tenders offer the best way to access Koh Kood’s unique experiences.

“We go down there in Songkran [Thai New Year], a water festival, so unless you want to get drenched you get out of town,” Stamp advises.

“It takes a day to go down and a day to come back and we have four or five days there. It’s the most beautiful island and one reason is that the only way you can get around is by boat – unlike the nearby larger island of Koh Chang. We go to different bays. It’s a very pleasant trip.”

This year John and Laura will again host mostly family and a few fortunate friends aboard Liberty Call during Songkran. I have a feeling this former Londoner, who gladly became a Thai citizen 25 years ago, never tires of the moment dusk falls over a nearby island.