The 9th annual ASMEX Conference was capped off with a brilliant evening commencing with Benetti Pre-Dinner Drinks followed by a celebration of the outstanding achievers in the Australian superyacht, marine export and commercial spheres at the 2019 Australian Marine Industry Awards Gala Dinner.

The Gala Dinner was held in MacArthur’s Ballroom at the InterContinental Sanctuary Cove Resort, Tuesday 21 May, to honour the worthy winners over 11 categories.

“Their investment, hard work and high standards pay off. We are proud to elevate this amazing group of marine industry professionals and pay tribute to their talent and tenacity.” 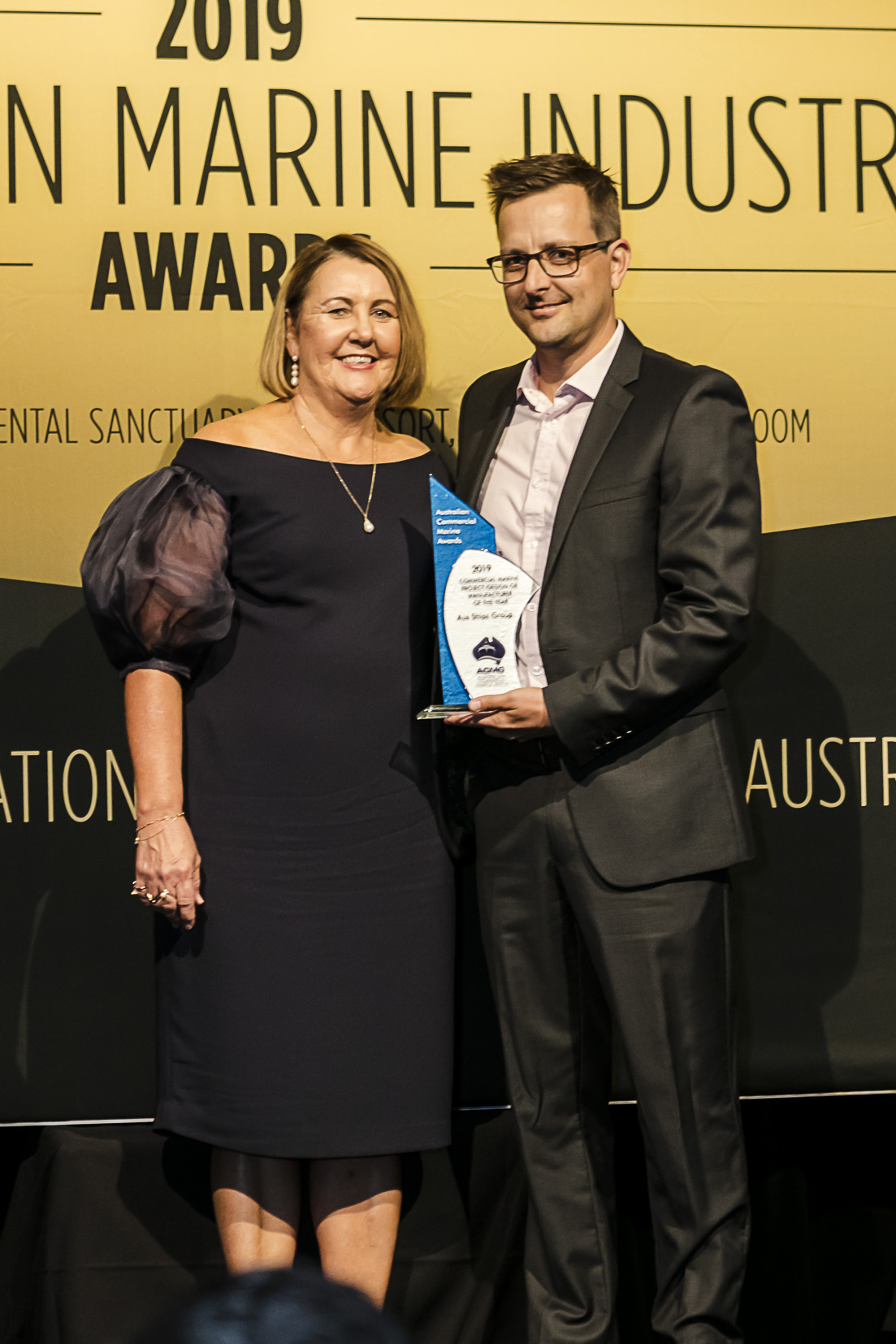 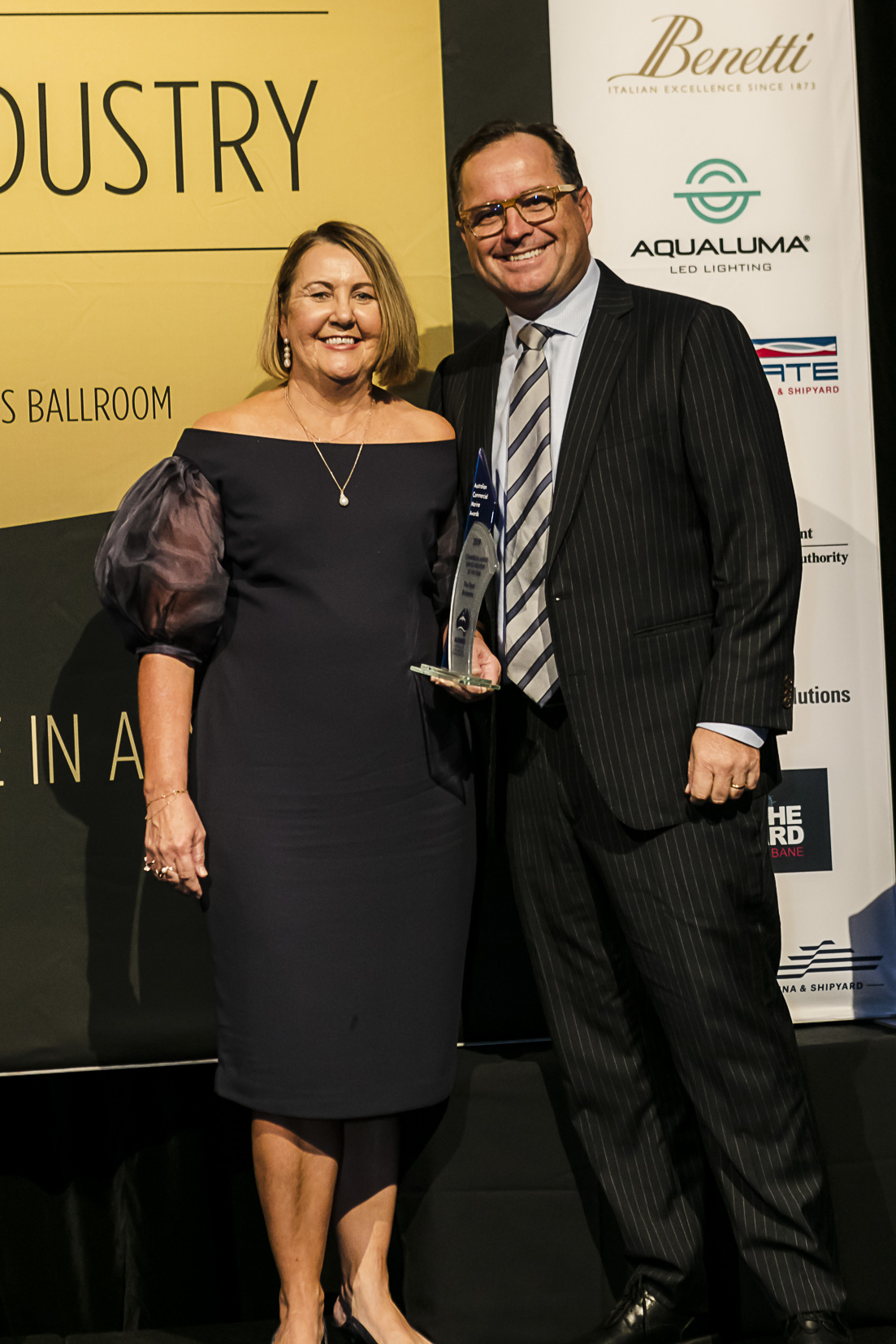 BSE Maritime Solution’s Commercial Marine Service Provider of the Year was won by The Yard Brisbane. 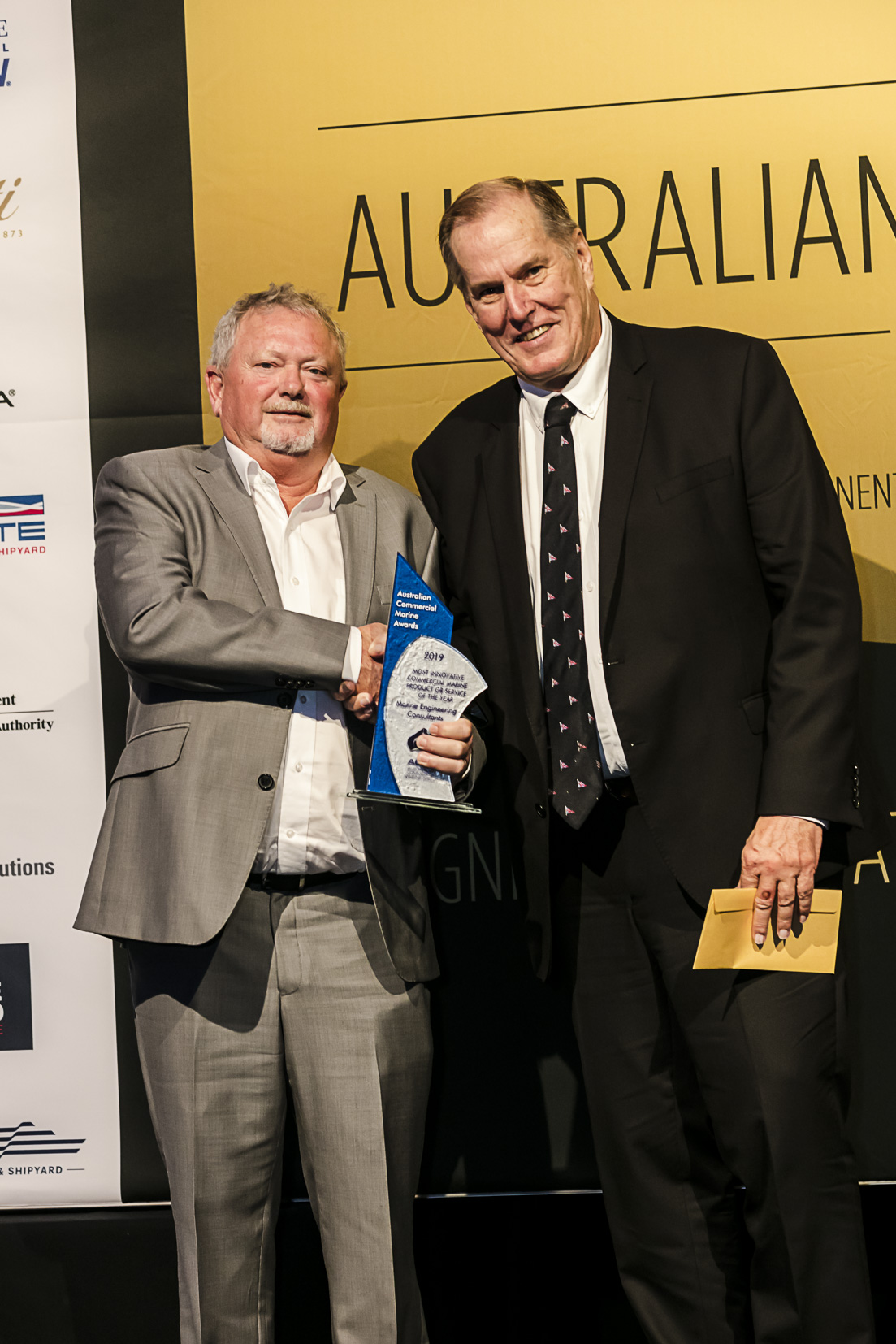 In the Commercial segment, Aus Ships Group took out The Yard Brisbane’s Commercial Marine Project/Design or Manufacturer of the Year Award for its high-profile work on the diverse fleet of craft for the InterContinental Hayman Island Resort.

Tommy Ericson, CEO of Aus Ships Group, based at Rivergate Marina & Shipyard, Brisbane said “The Award is fitting recognition of our ability to deliver projects from end to end; being concept design to construction to delivery.

“Every division of the group was able to work together to ensure each unique boat was produced to the client’s exacting standards without compromise.”

As Director Murray Owen explains “We nominated an innovative, luxury helicopter pontoon that was built for Hamilton Island Air and designed by One2three Naval Architects.

“This pontoon has a VIP lounge area complete with superyacht tender that launches inside this VIP area which becomes a large swimming platform from inside the pontoon once tender is launched, plus innovative bird deterrent spikes that operate remotely from chopper on approach and departure. The pontoon is moored at Heart Reef and is self-sufficient by means of solar and wind generation power with means to produce desalinated water.

“It’s always a humbling pleasure to win an award as it showcases our ability to industry and shows we are on the top of our game. It’s a great accolade for all involved in the project.” 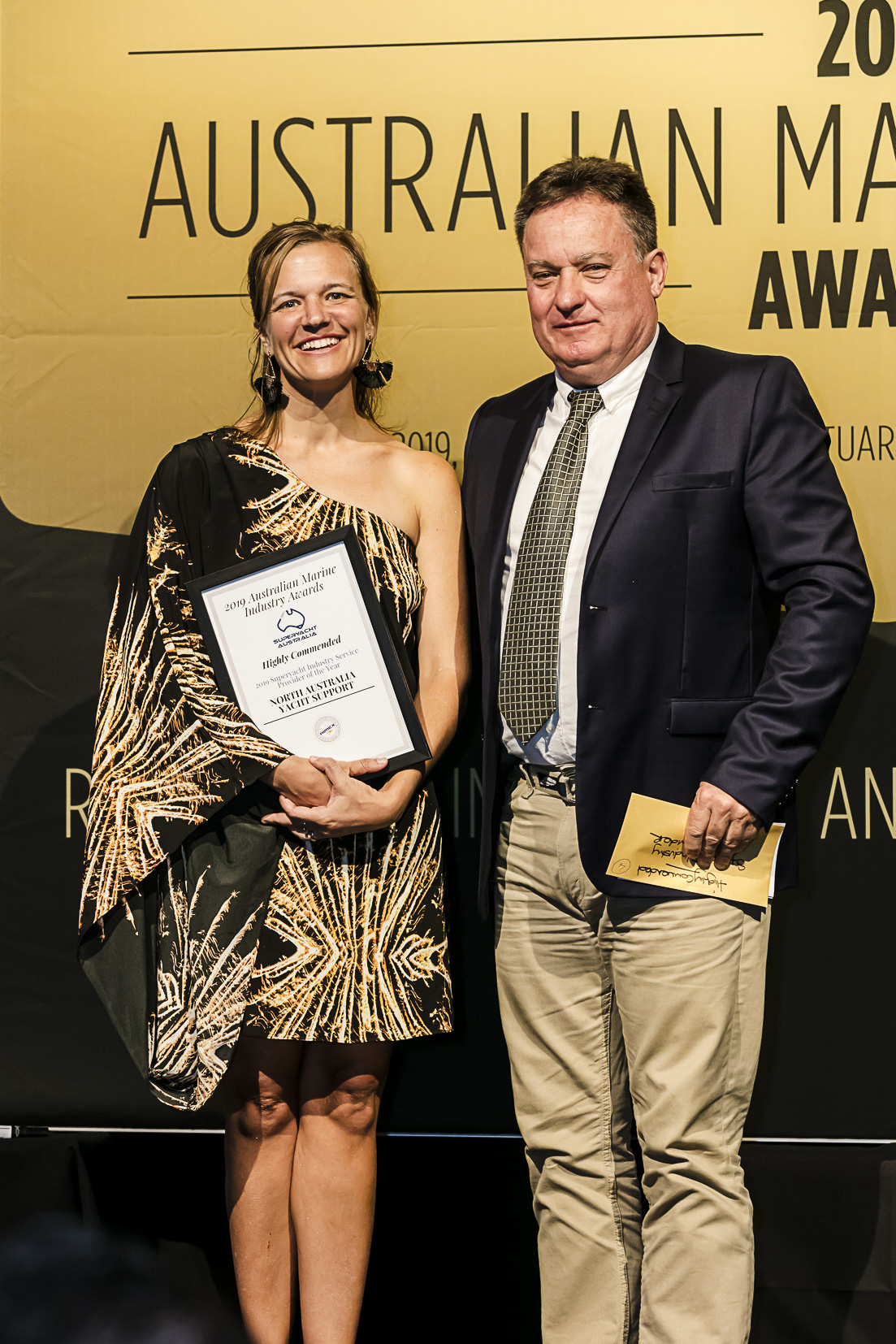 Highly Commended in the Superyacht Industry Service Provider of the Year was awarded to North Australia Yacht Support. 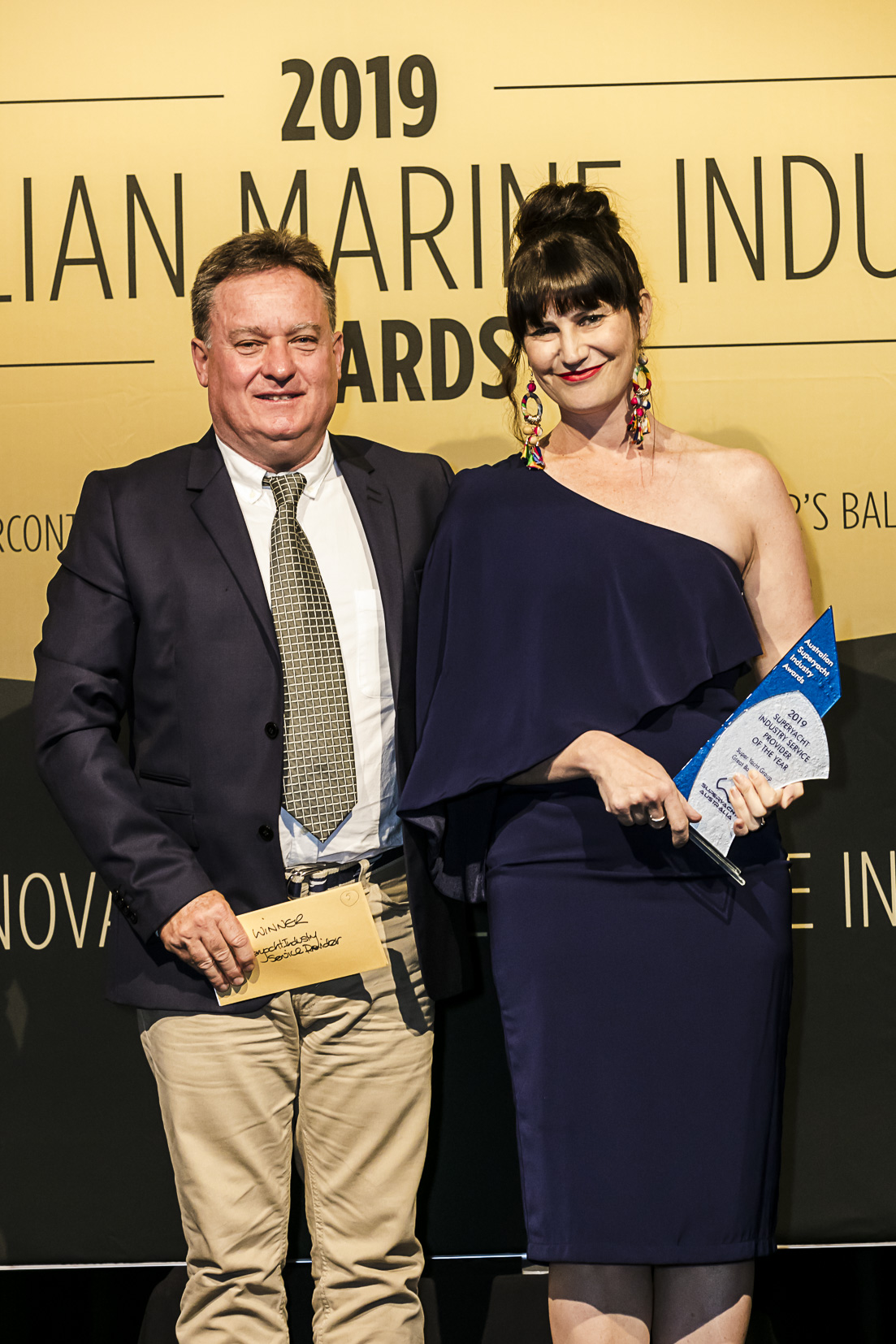 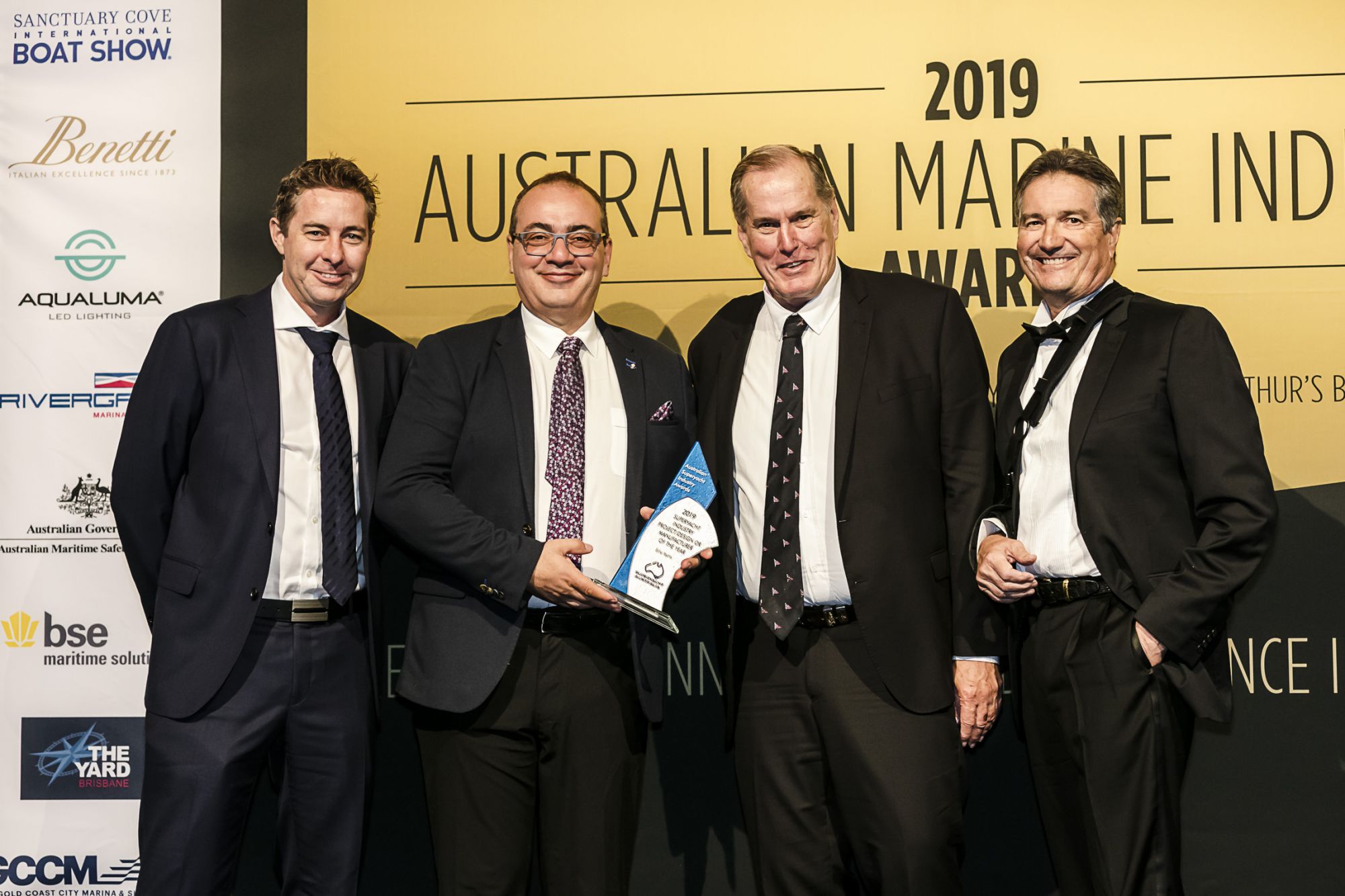 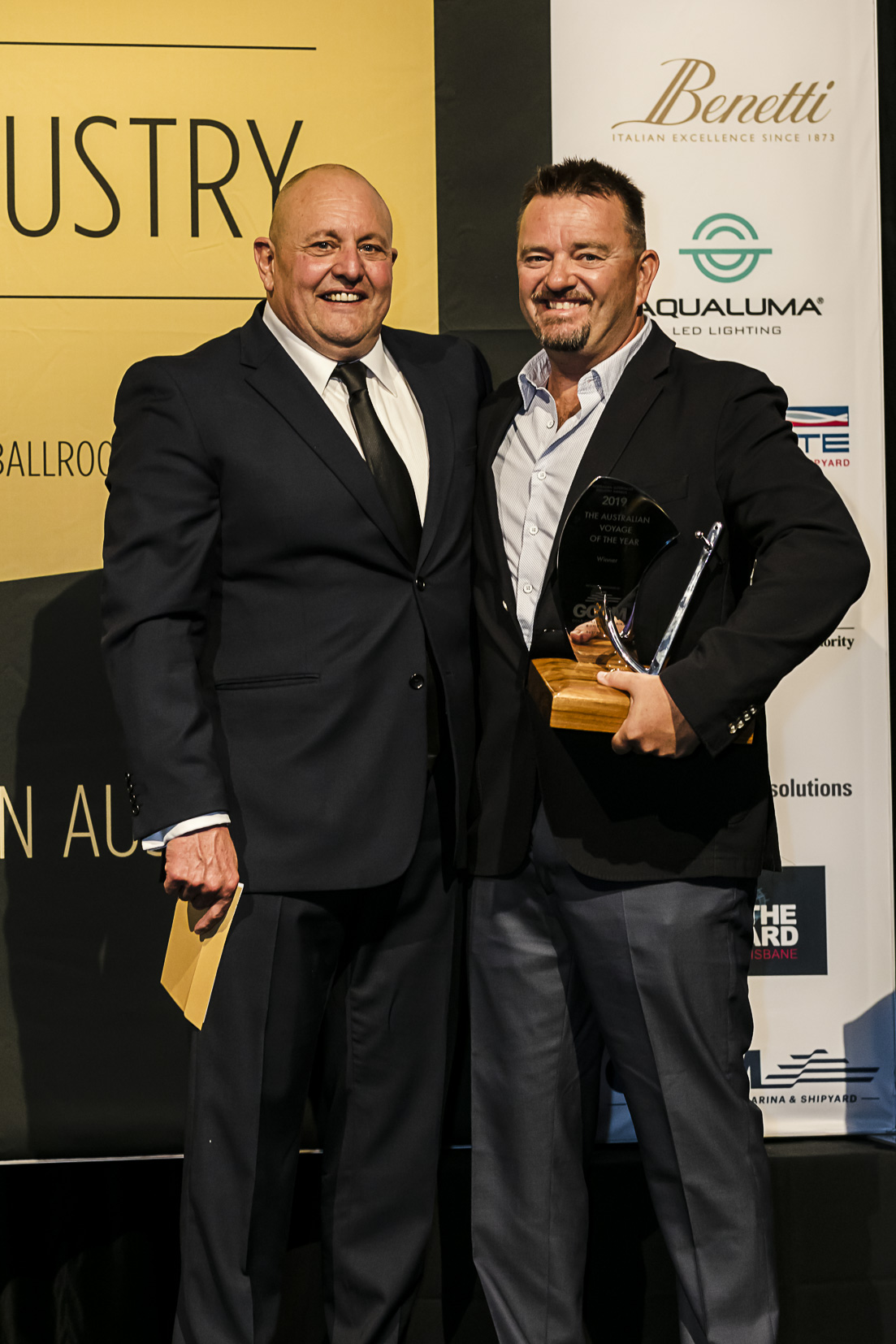 In the Superyacht segment, the quality of entries demanded a Highly Commended as well as a winner in the Superyacht Industry Service Provider of the Year category, and North Australia Yacht Support was recognised for their activity in this arena.

“This award is great recognition of our work to promote cultural awareness in our region and to share the truth on the health of the GBR, that although it faces future challenges, it is still alive and well with world class diving opportunities.

“Thank you to the great team at Superyacht Australia for their success on another great conference and awards night, added Joanne”

From Western Australia, Echo Yachts deservedly took out Rivergate Marina & Shipyard’s Superyacht Industry Project/Design or Manufacturer of the Year for 84m ‘White Rabbit’, with exterior and interior design by Sam Sorgiovanni, which has the distinction of being the largest ever superyacht built in Australia, the world’s largest aluminium superyacht and largest trimaran superyacht.

“Echo Yachts is proud to have been recognised among our industry peers and international guests. Awards are a fantastic way of getting our message out there about what can be achieved in Australia in terms of high quality and innovative superyacht builds.

“Our proximity to Asia makes us brilliantly positioned for new builds and refit work in the region.”

“The management of Echo Yachts wishes to thank all our hard-working skilled employees and sub-contractors who worked tirelessly throughout the project.”

Rounding out the Superyacht segment, the inspirational Gold Coast City Marina & Shipyard Australian Voyage Award was presented to the intrepid Captain Martin Debanks of luxury charter yacht, MY SPIRIT, for the voyage of a 10day charter from Cairns, then Lizard Island to Port Douglas.

“There was special mission for our client and her family, checking out the Great Barrier Reef and seeing for themselves it’s general health,” explained Martin. “They are avid snorkelers who very much into conservation and preservation of marine life. This is their seventh visit and they were thrilled and very relieved to see the Reef is in very good condition. They spent at least four hours a day snorkelling, and particularly loved Pixies Reef, off Ribbon Reef number 10.

“I feel privileged to receive such a fantastic Award,” Martin continued. “And to win it for a local Voyage is a proud moment. It’s our local region and so many people’s bread and butter such as marlin fishing operations and dive boats – who do a brilliant job protecting the Reef and showcasing it to the world. It is a fantastic way to counter some of the sensational media coverage around the health of the Reef.” 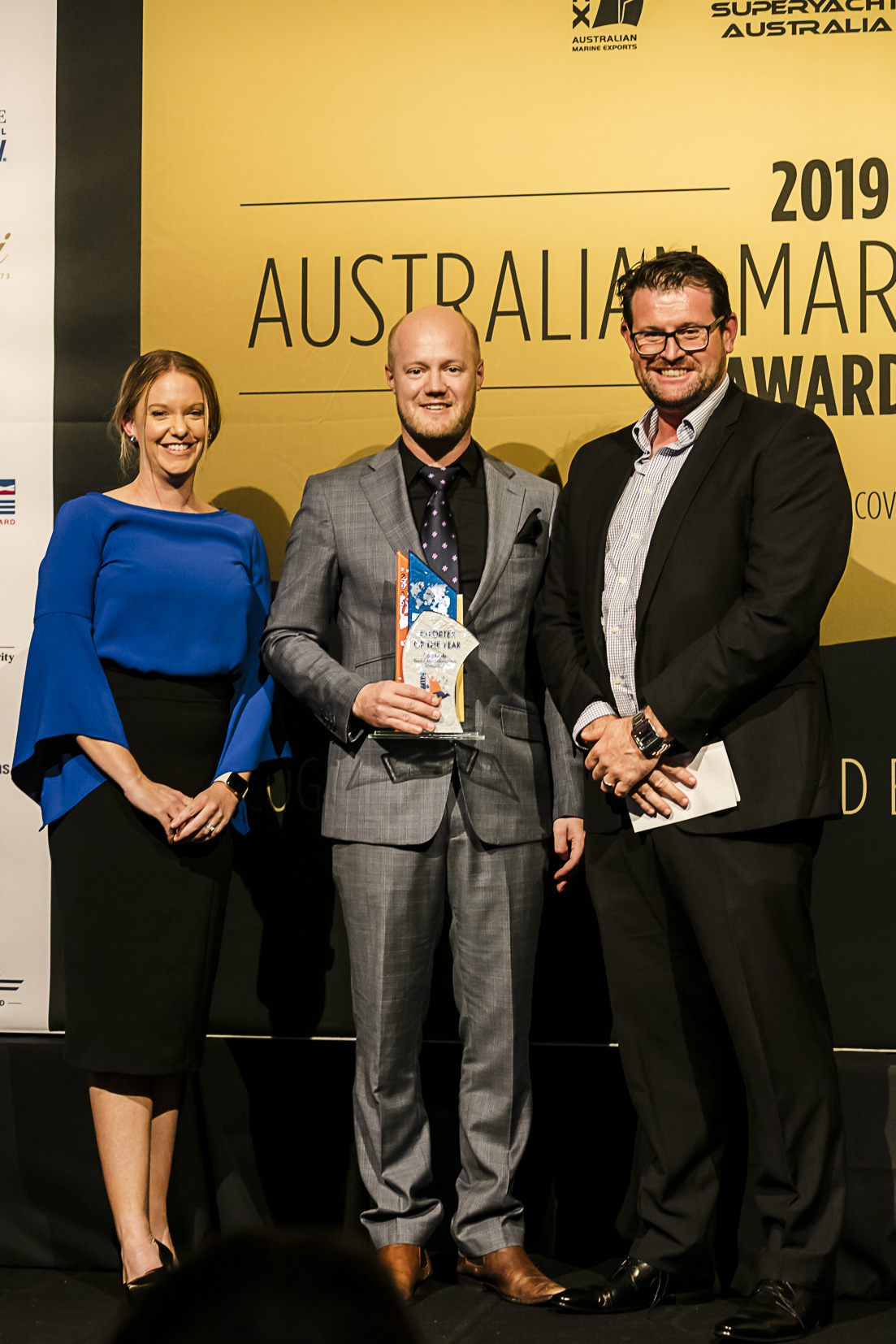 Seahub was awarded Marine Industry Exporter of the Year - one of Seahub's three awards, received by co-founder, Matthew Hyde. 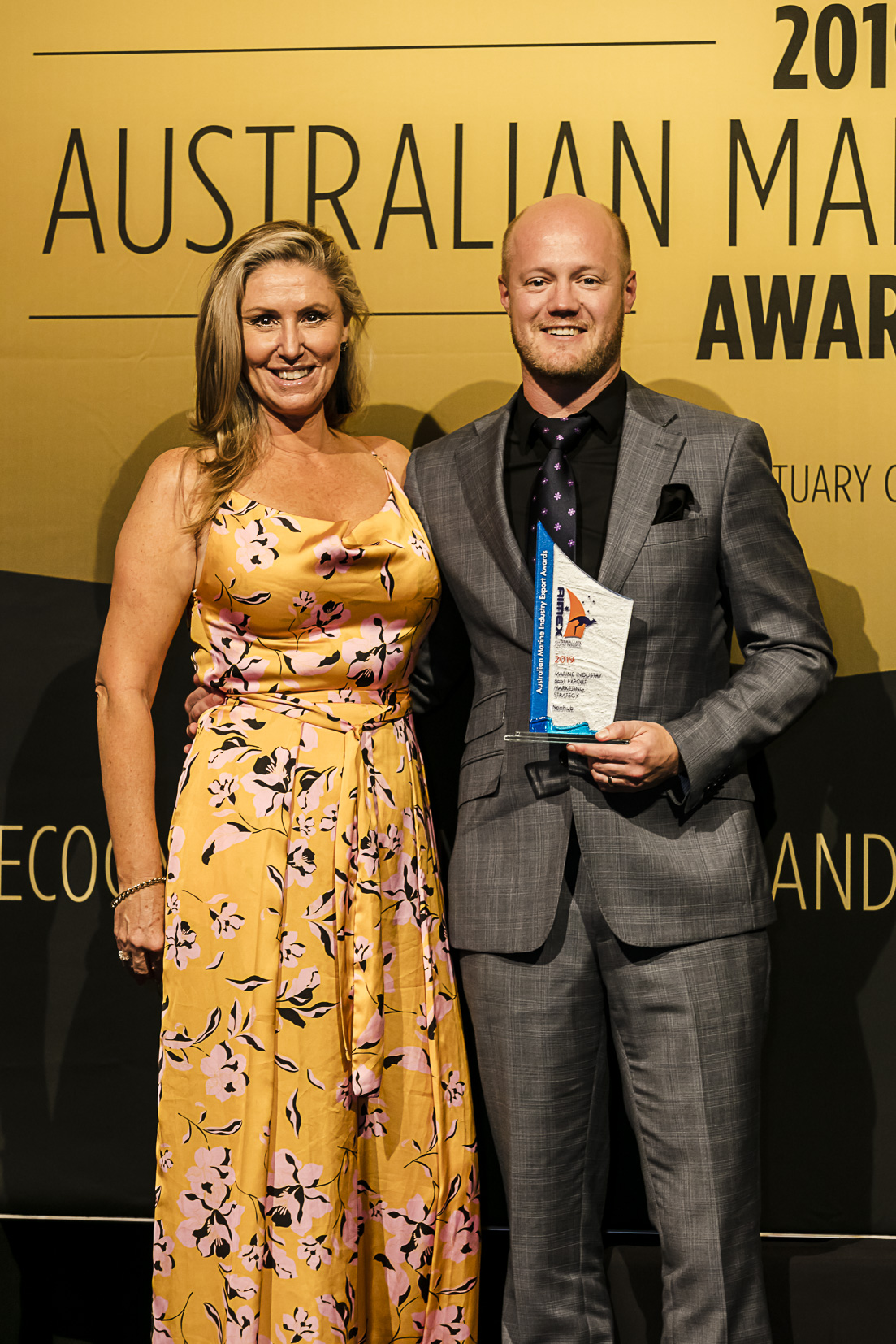 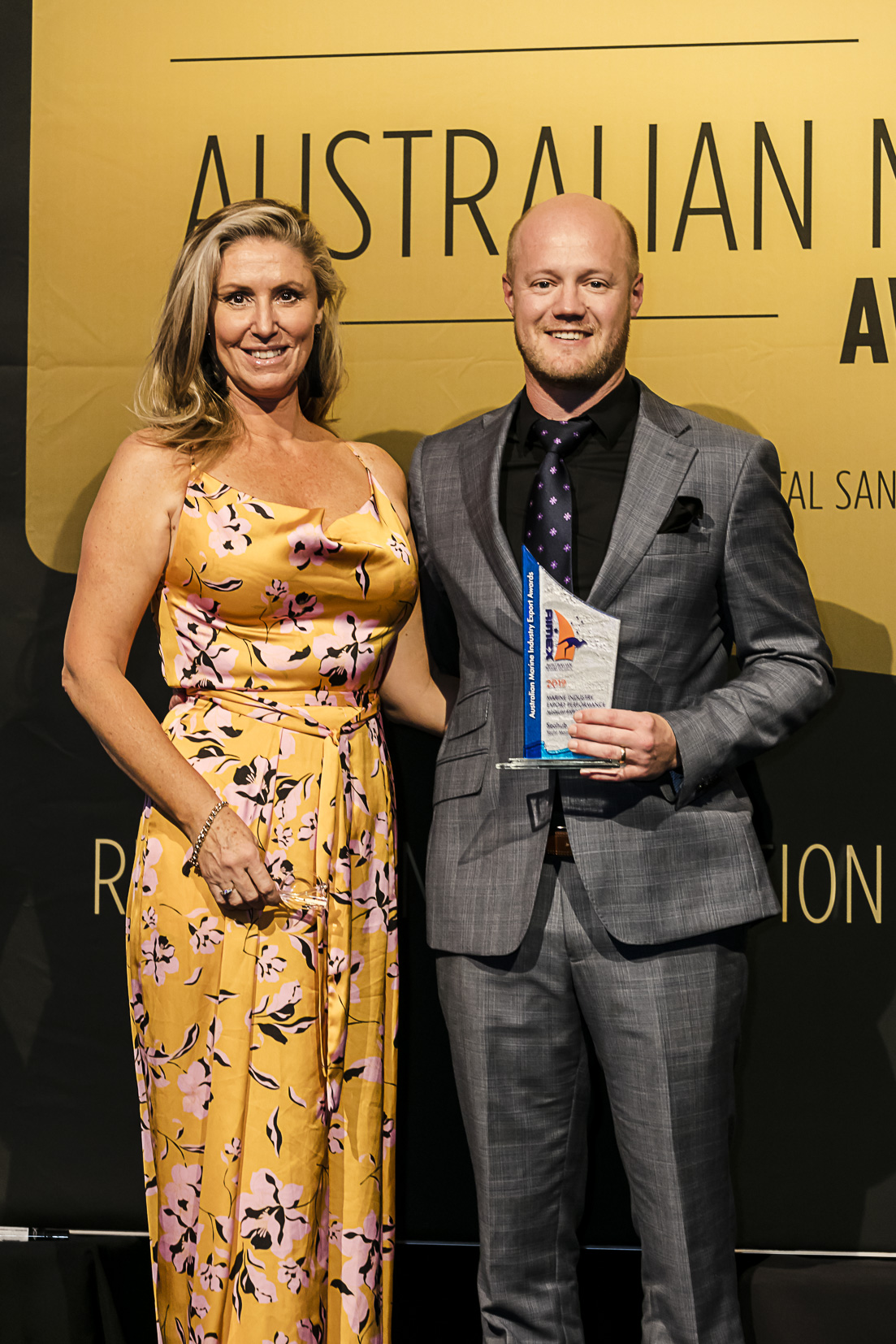 In the Export category, Seahub scooped three of the four Awards, a testament to its ground-breaking innovation and appeal.

Sanctuary Cove International Boat Show were sponsors of the Marine Industry Exporter of the Year award.

A user-friendly maintenance management software, Seahub was devised and developed by Matthew Hyde and Sam Wheaton. Seahub is an intuitive and user-focused solution designed to manage vessels ongoing maintenance and safety requirements.

Matthew Hyde said winning the brace of Awards put his team “over the moon”.

“To receive these awards from AIMEX is a huge honour given the calibre of businesses that come out of the Australian market. We’re lucky enough to work with international vessels and the reputation that has been paved before us by Australian businesses is often what allows us the chance to do what we do today.

“Our entire team is really thrilled to receive this recognition. It’ll keep us jogging on the spot for a long time to come.” 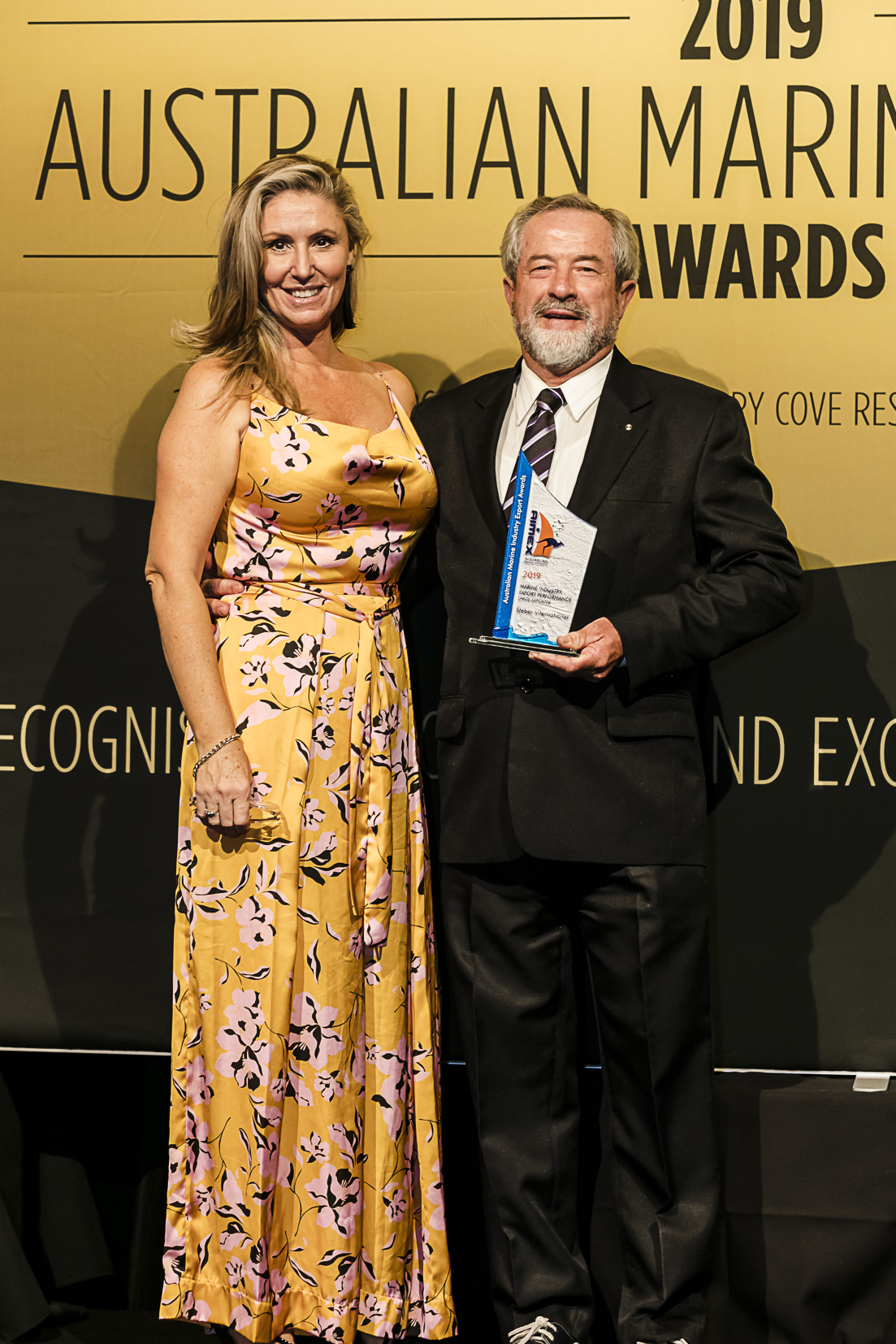 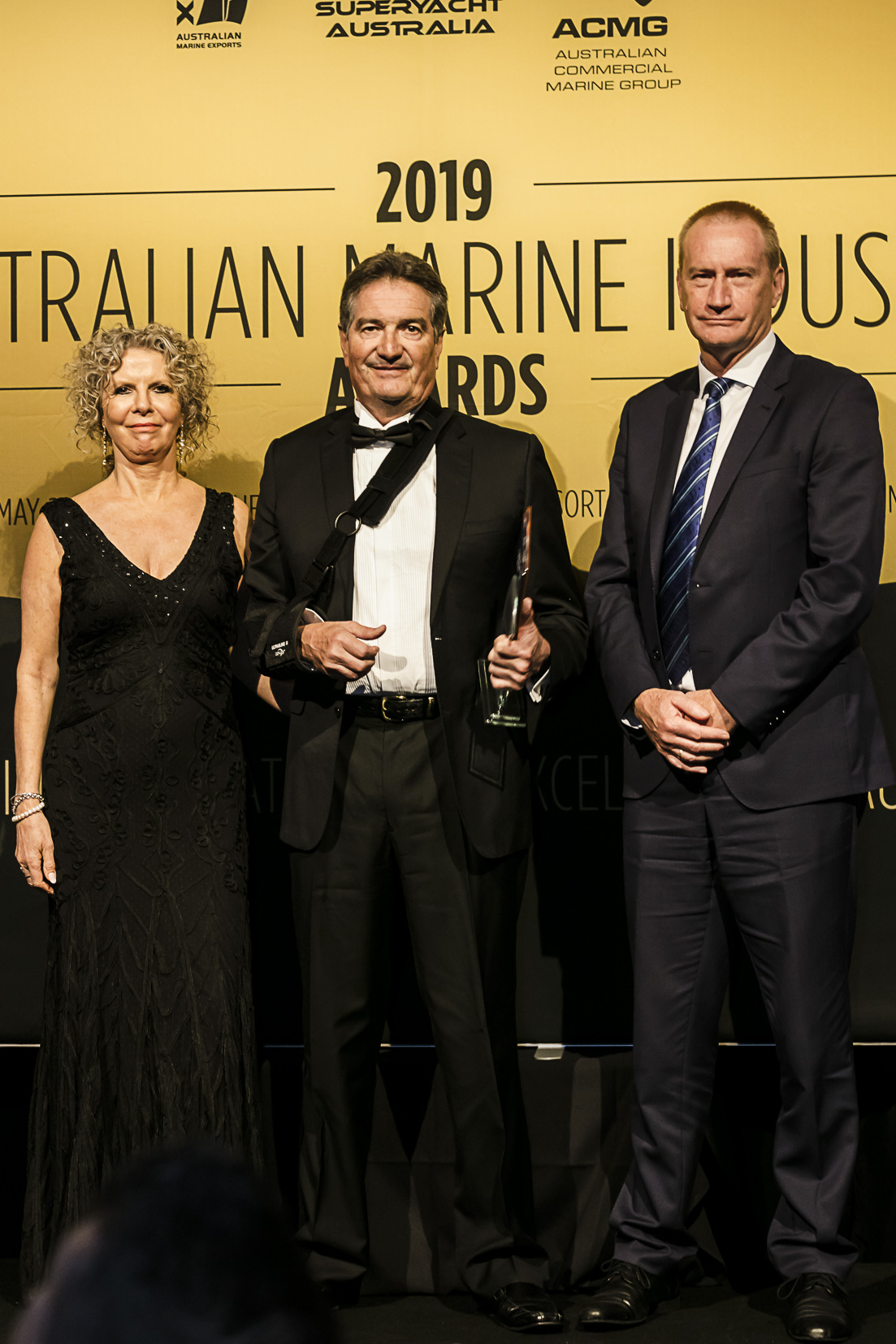 Renowned worldwide for their robust commercial craft, Steber International was founded in 1946 and remains a family owned business operating from Taree NSW.

Steber is considered a pioneer in the construction of fibreglass vessels in Australia and manufactures high quality commercial and recreational motor vessels, ranging in size from 6.5 to 20m and used in commercial fishing, charter, patrol, sea rescue, medical support, surveillance and recreational use.

“I am very pleased indeed!” said Mark. “I’ve been around for a long time, built dozens of boats. During this time, I have surrounded myself with very good people on this journey and we have achieved some amazing things along the way.

“White Rabbit is the most successful build I’ve ever been involved in and Awards of this nature are recognition of our time on the ground and that we’ve delivered the goods. It’s a nice recognition of the entire journey!

“All the accolades ‘White Rabbit’ has received have increased interest in our business ten-fold, from all over the world,” Mark continued. “Being based in WA can seem daunting to brokers, but we have a powerful suite of factors in our favour: facilities, talent, ability to create a customised product, plus a favourable exchange rate for overseas buyers.

“Building something like ‘White Rabbit’ which was a five-year journey, proves the effort is worth the investment.”

“The continued support of these businesses enables the recognition and worldwide promotion of Australian ingenuity, talent and innovation,” said David.