With the theme “Driving Innovation and Sustainability”, the focus of this year’s ASMEX conference was industry-led environmental and sustainability initiatives, plus a commitment to promoting Australian ingenuity and facilities to the world.

The conference was a huge success with 170 delegates attending to discuss and debate key opportunities and to set the agenda for the future promotion of the Australian marine industry.

Michael Healy, MP for Cairns and Queensland Government & Superyacht Strategy Champion officially opened the conference and emphasised the onus on industry to tell government what is required for growth.

Speakers included Andrew Ridley, CEO of Citizens of the GBR who was inspired by the perception in Europe that “the Reef is dead” following two sequential bleaching episodes which made the news where he was living in the Netherlands, Andrew was motivated to understand the issues for himself, and then engage the world to comprehend and protect the GBR. 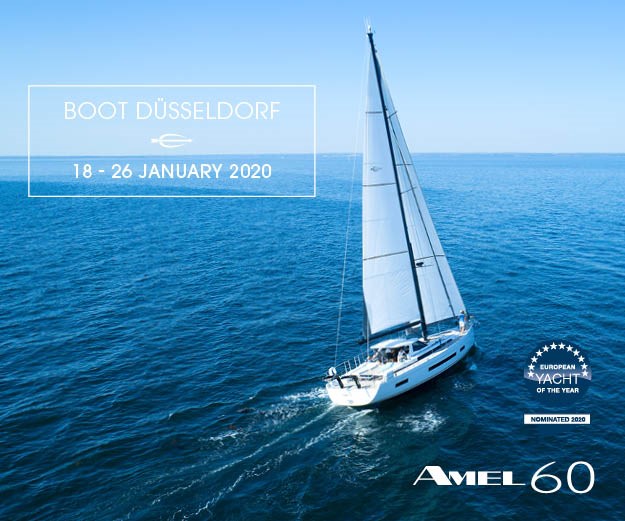 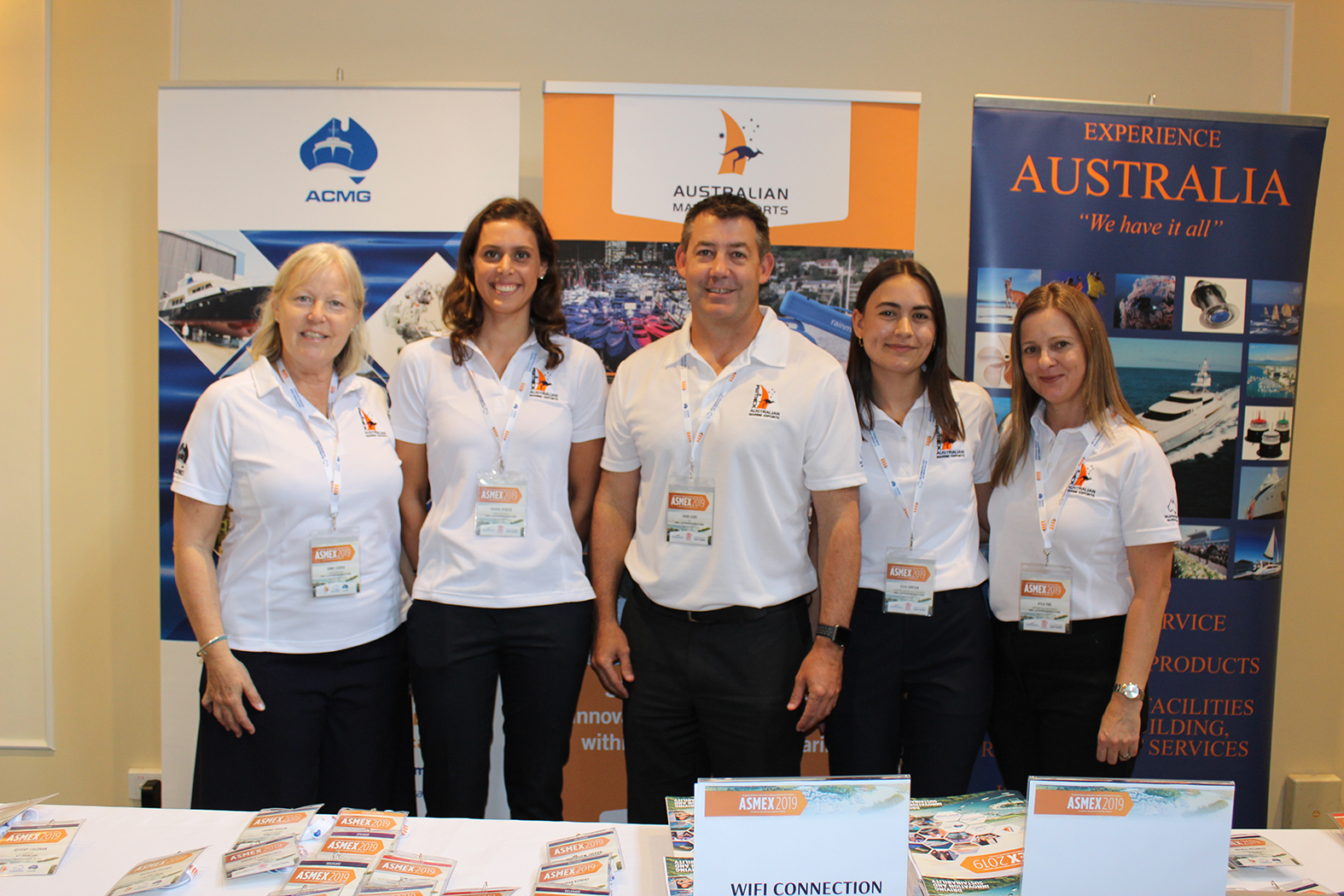 The AIMEX team welcoming delegates at the start of ASMEX. 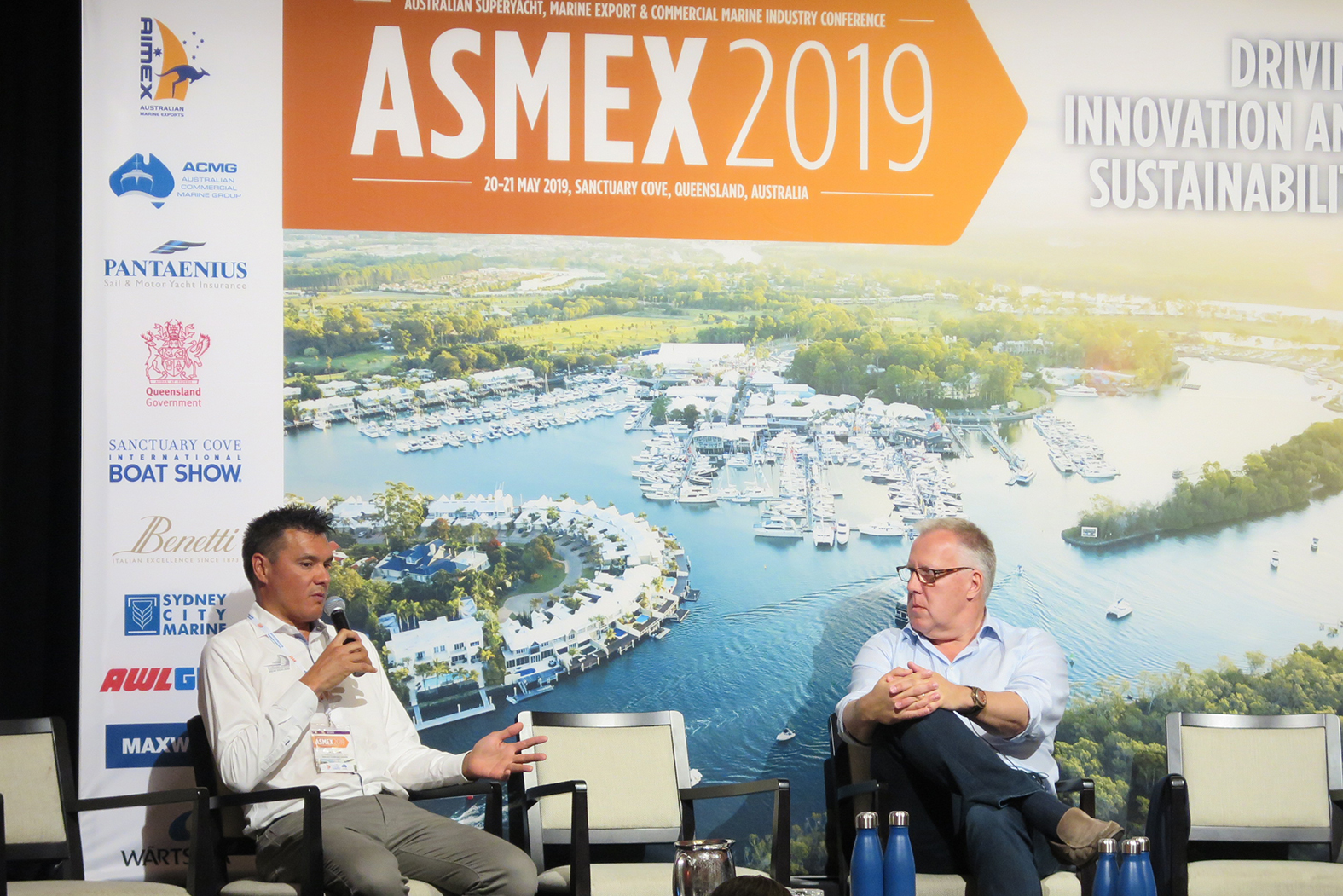 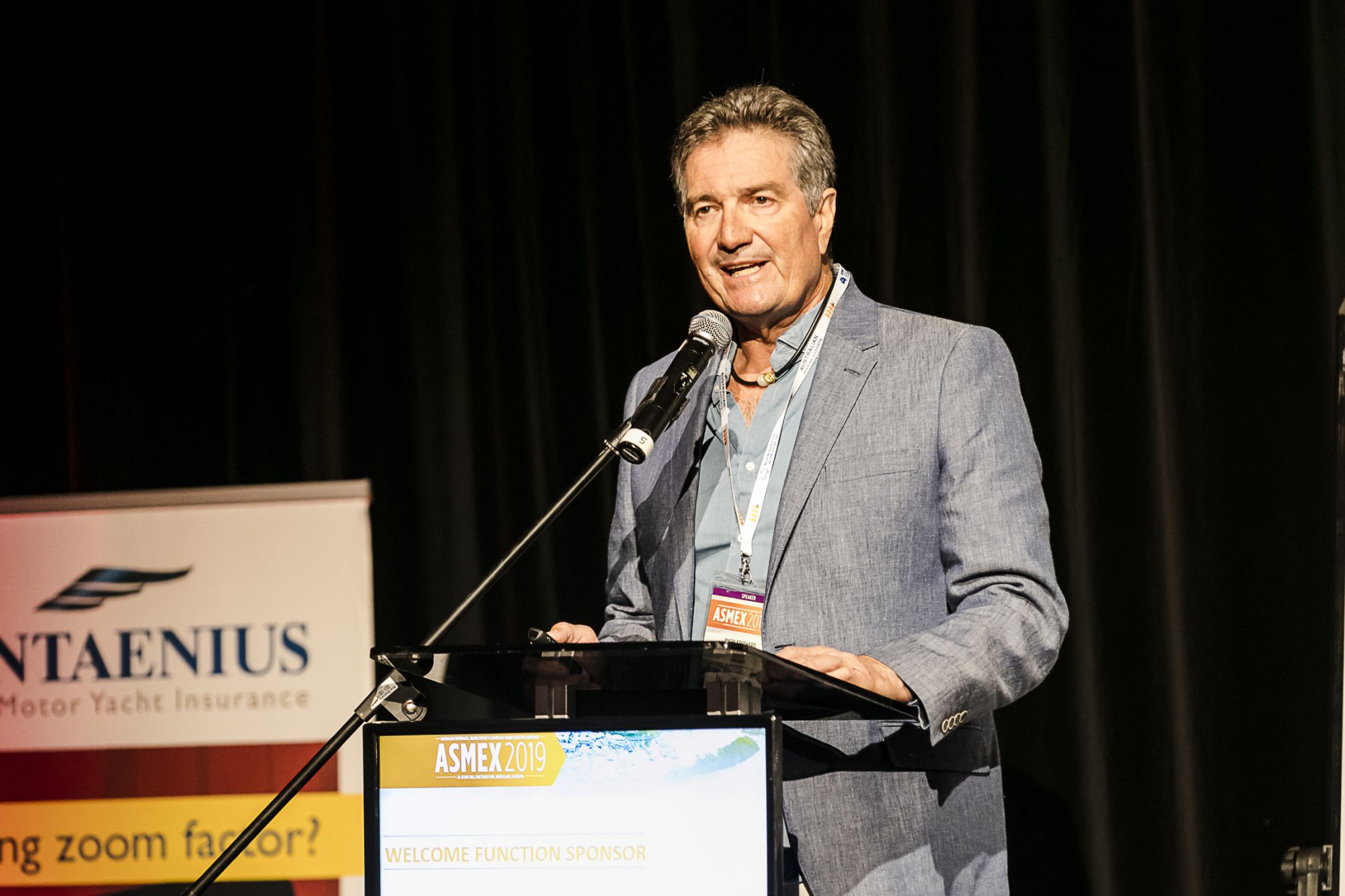 He finished with a clear message to delegates to spread the word, that although the Great Barrier Reef has been damaged from recent bleaching’s it is far from dead and there are multiple projects underway actively working towards a full assessment in 2020.

The crucial factor in Auckland hosting the AC36 is the support of the NZ Government and Auckland Council, who recognise the value of the event and the visiting superyachts to the local economy.

“It’s to the tune of NZ$1 billion, which is a lot. We’ve received interest from 120 superyachts seeking berthage and we’ve created a massive program of events to keep them here. There will be a direct impact on the NZ boat building industry across the board, from superyachts to tenders and sail makers, and that will flow on to Australia because we will run out of capacity,” said Aaron.

Japan was also in the spotlight, with a lively overview by Nigel Beatty, Director of The Someya Group.

Mr Beatty touched on the stats and facts about Japan, which will host the Rugby World Cup in 2019 and the 2020 Olympic Games, such as its archipelago of 3,000 islands, protected waters, huge inland sea and 15% more coastline than Australia.

“It’s safe, clean, very modern, and yet also offers more than 2,600 years of fascinating history. And there are more Michelin-starred restaurants than New York, London and Paris combined.

Superyachts such as MY BIG FISH, MY A and MY EXUMA have all experienced Japan, many are repeat visitors.

“And really, Japan is not far from Australia and there’s support all the way, through Taiwan, Hong Kong, Palau, Indonesia, Melanesia. Compared to the traditional ‘milk run’ across the Atlantic, it’s actually shorter.

“It should be our collective aim to get these big superyachts to the Pacific and then we send them down. Together, we should be lobbying governments and Chambers of Commerce so they understand the value of visiting yachts to their economies.”

Craig Norris, CEO of Victoria International Marina, Canada, echoed this sentiment, pointing out in his presentation that “the Pacific potential is enormous”.

“The Pacific North West has a vibrant yachting community – some 350 resident yachts and 150 visiting yachts”.

MC Martin Redmayne did the figures and suggested that given the membership in the Asia-Pacific region, around 1,000 member businesses, they could unite to form a marketing bloc as “a group of passionate people with a singular aim of promoting the Pacific to US and European superyachts”.

“You need to think big!” he urged delegates. “The Pacific is the future,” agreed Mr Beatty.

The journey from concept to completion of the multi-award winning WHITE RABBIT was delivered by Mark Stothard, Director at Echo Yachts.

At nearly 3000 gross tonnes, 84m in length and 19.6m beam, WHITE RABBIT is largest superyacht built in Australia, the largest aluminium and largest tri-hull superyacht in the world, launched in September 2018 and winning the Judges’ Commendation Award at the recent 2019 World Superyacht Awards.

“At the client’s request we explored their desire for ‘engineering boldness’ in the vessel’s form and latest technology engineering systems design,” said Mr Stothard. “The net result is a truly world class yacht and a credit to everyone involved.” 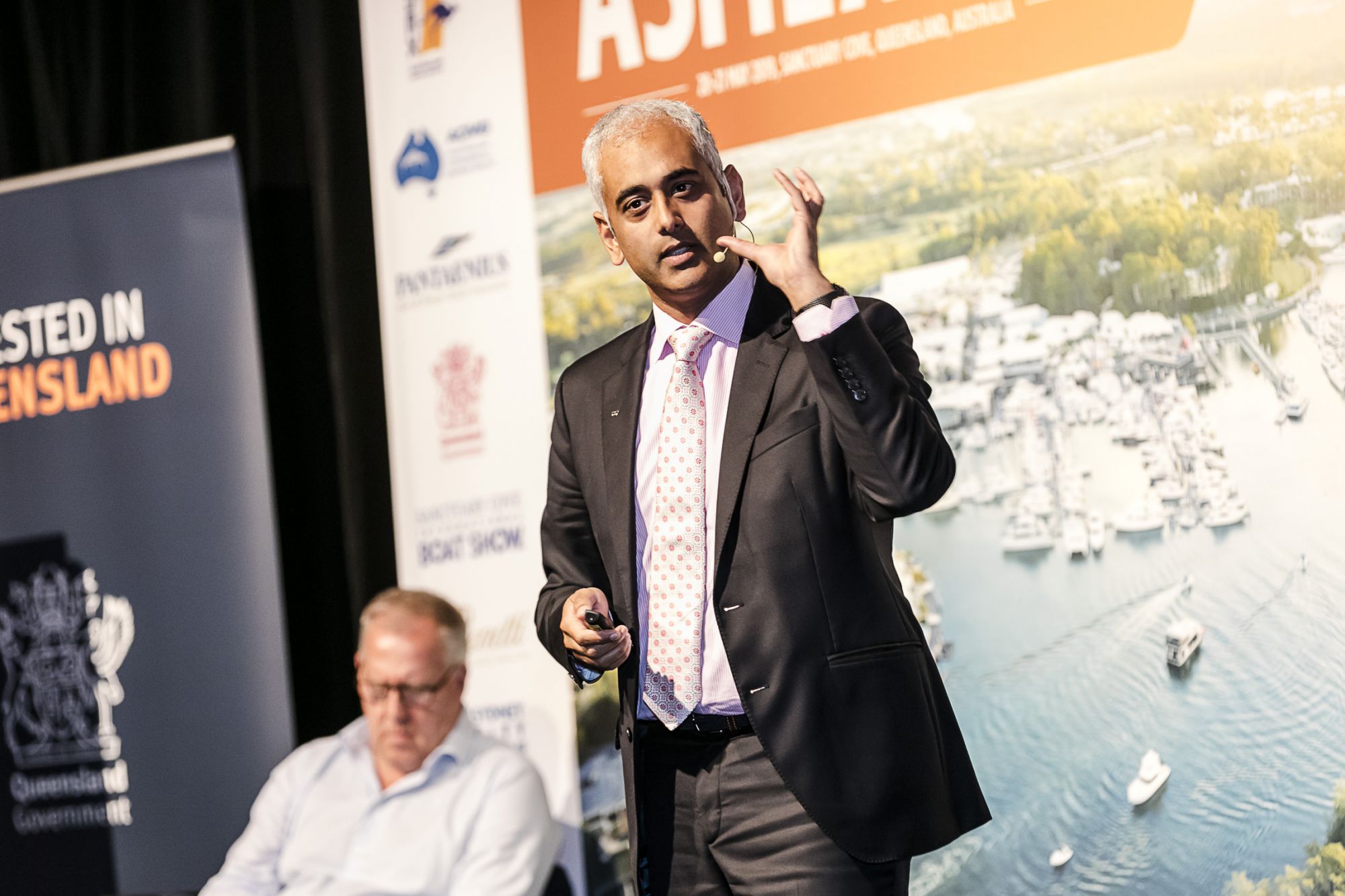 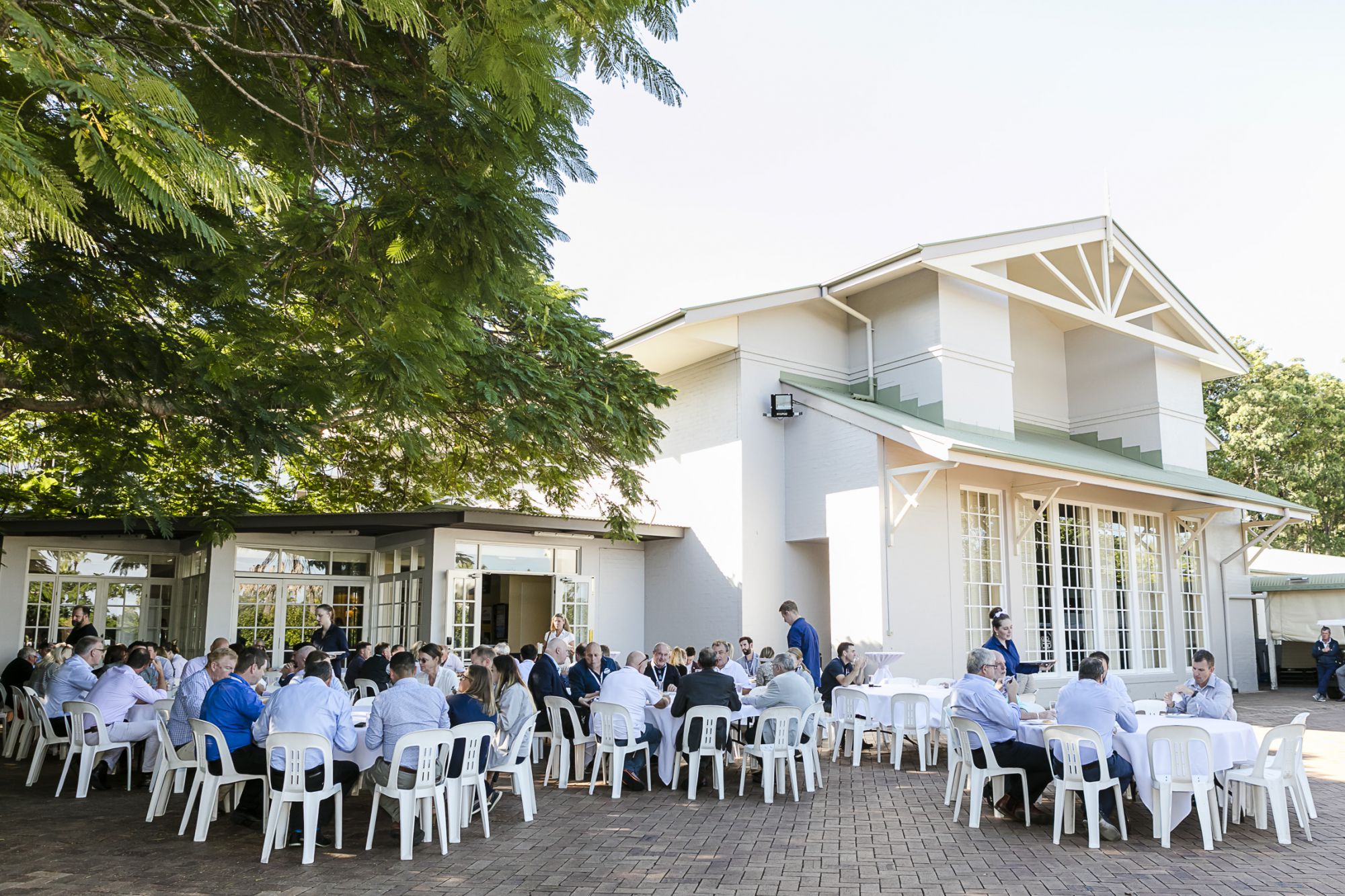 Delegates enjoyed the networking and socialising. 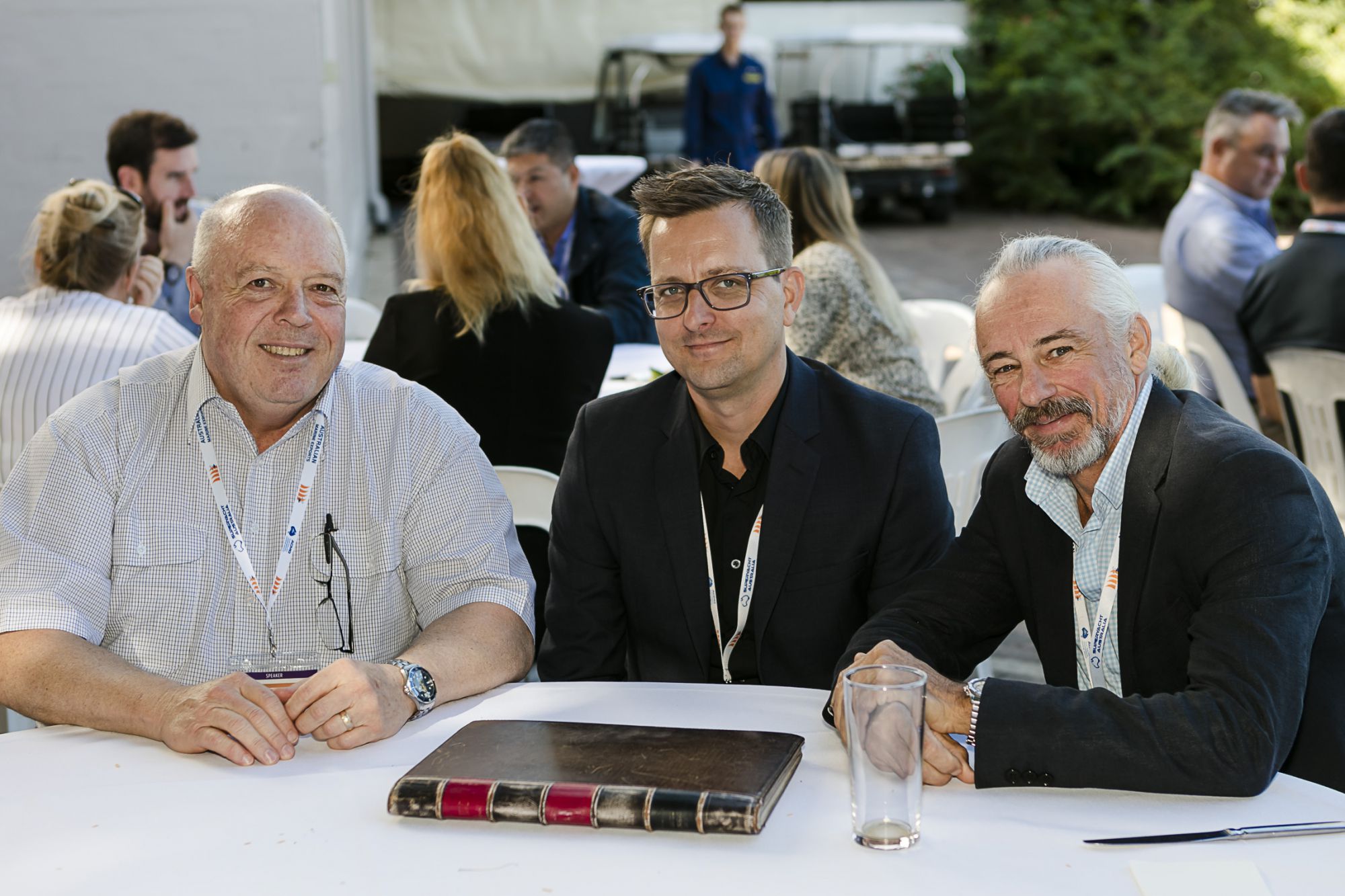 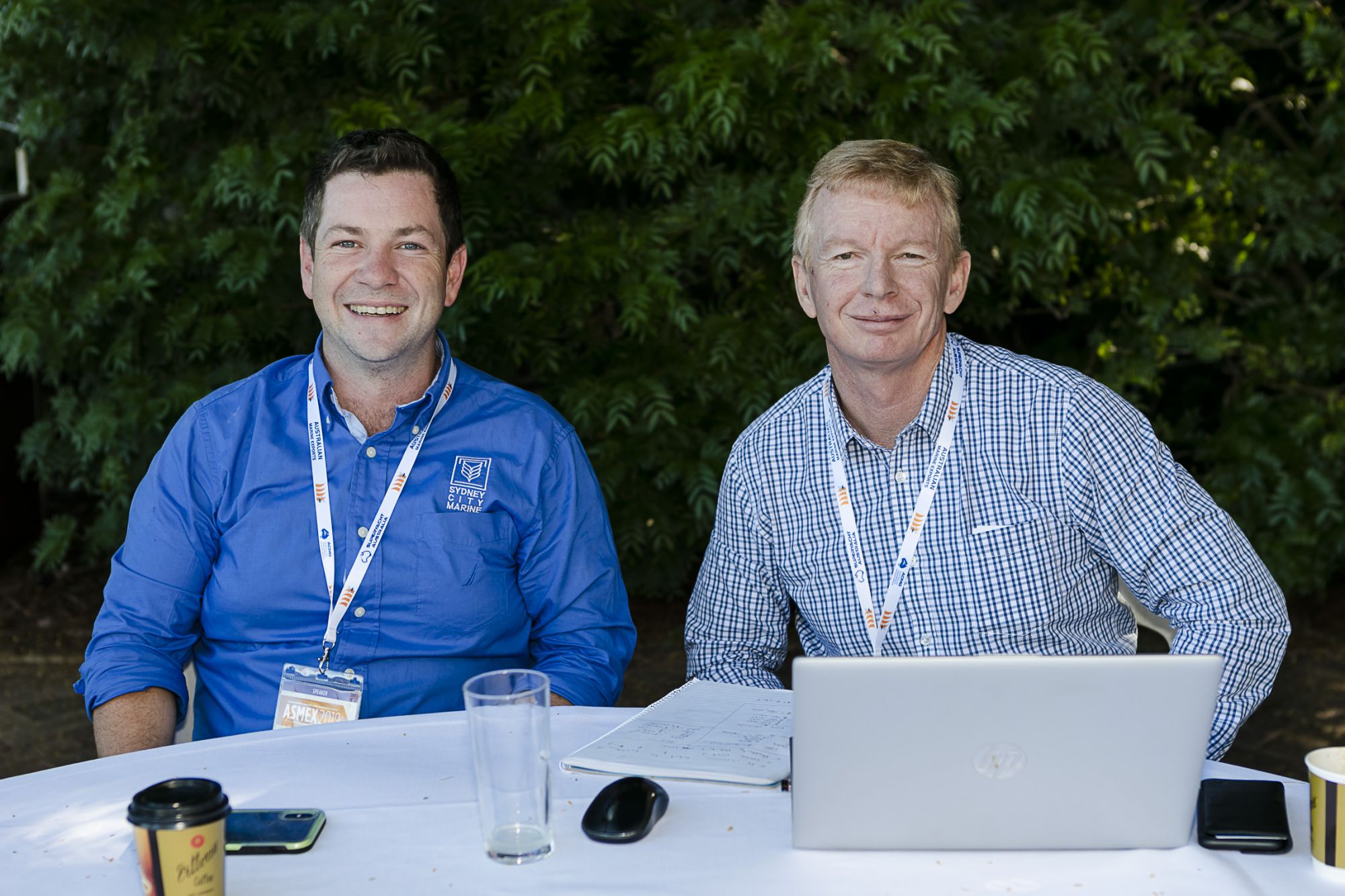 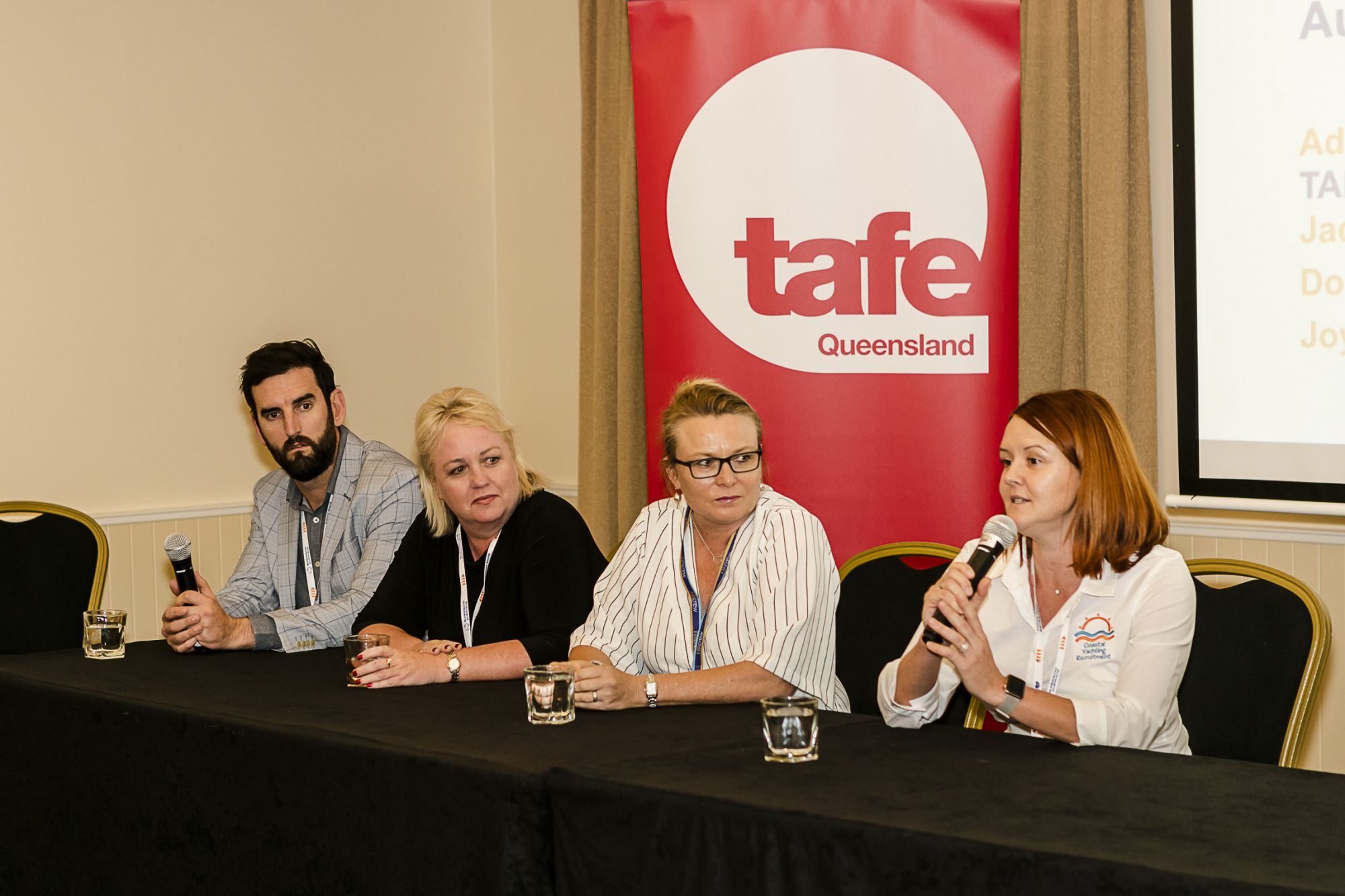 Breakout sessions on training, crewing and managing the skills shortage. 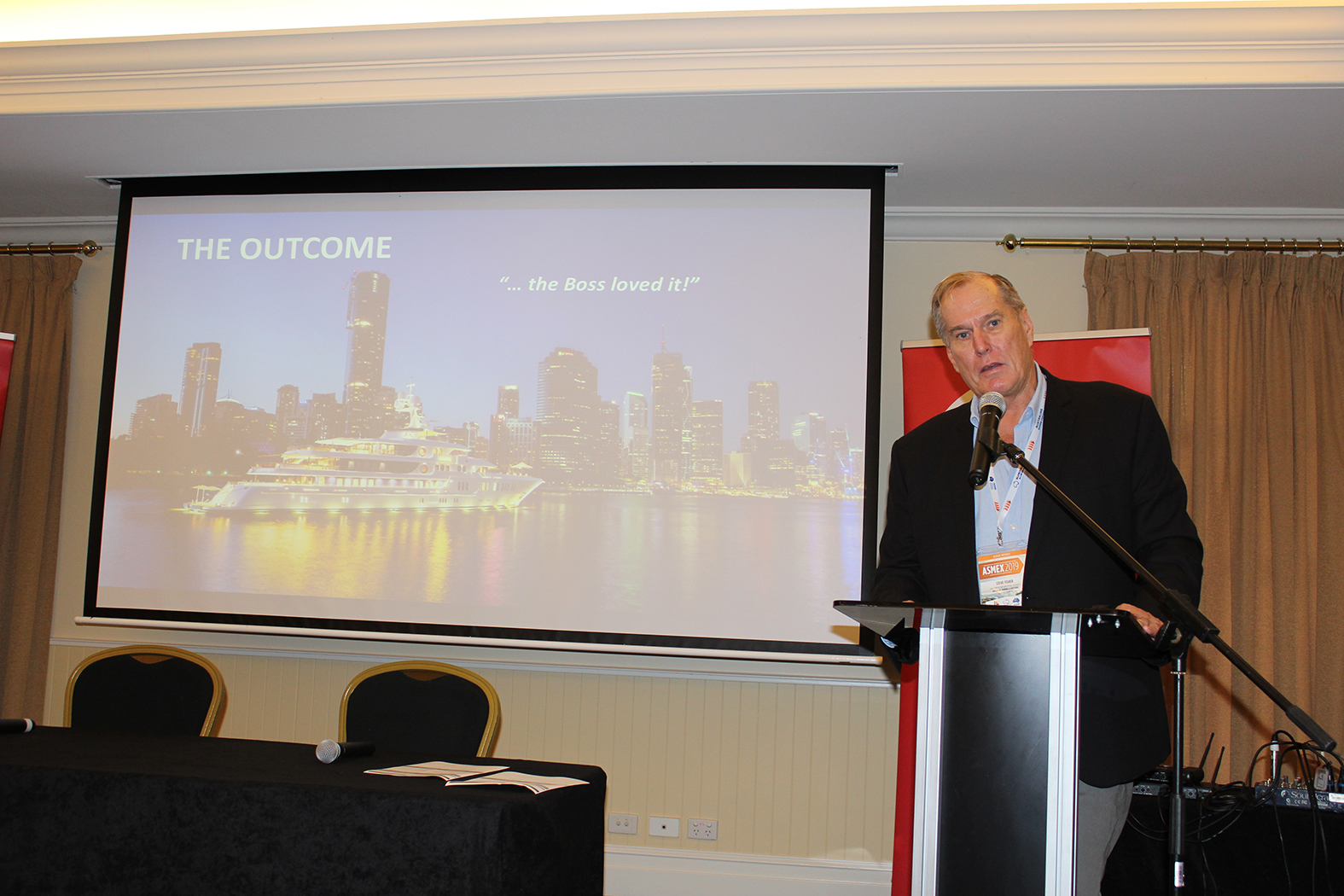 Steve Fisher, Rivergate at the breakout session focused on dealing with government.

Kiran Haslam, Marketing Director, Princess Yachts presented on “Innovation in the Marine Industry. From innovations in toilets in confined spaces, conveying how innovation can be improvement, rather than major advance, to a cryptic, compelling advertisement for the Princess R35, Mr Haslam had the audience transfixed with his patter, poise and pertinent marketing advice.

“Innovation is by definition, ‘intellectual creativity without any thought given to economic outcome’.” He then referred to the greatest disruptor, heralding the modern era of research and philosophy, Charles Darwin, who hypothesised “the species that survives is the one that is able to adapt to and to adjust best to the changing environment in which it finds itself”.

He urged delegates to look beyond the “same old people” in their marketing and get to know Millennials and what motivates them, consider adapting your message to the gaming community, which he said “is going ballistic”, and “open our world up to more people”.

“No other industry has the appeal, the personalities and the allure of the yachting industry. It’s remarkable because it’s intimate. It’s inviting people in to where we eat, sleep and entertain friends and family. We need to revolutionise and innovate. And remember, personality goes a long way!”

Along with topical speakers, ASMEX featured several panels to include a session on the topic of “Growth drivers in the Australian refit and repair market”, that was led by Steven Fisher of Rivergate, Brenton Fischer Sydney City Marine, Trenton Gay Gold Coast City Marina and Shipyard, Justin Parer BSE Maritime Solutions and Mark Phelps The Yard Brisbane.

It was agreed that Australian yards have world’s best standards, and that government at all levels was required to “get onboard” to facilitate growth, but while most agreed that major investment in new facilities and equipment is a positive for the industry and that skills shortage was a serious concern, opinion was divided on the rate of the predicted influx of superyachts. 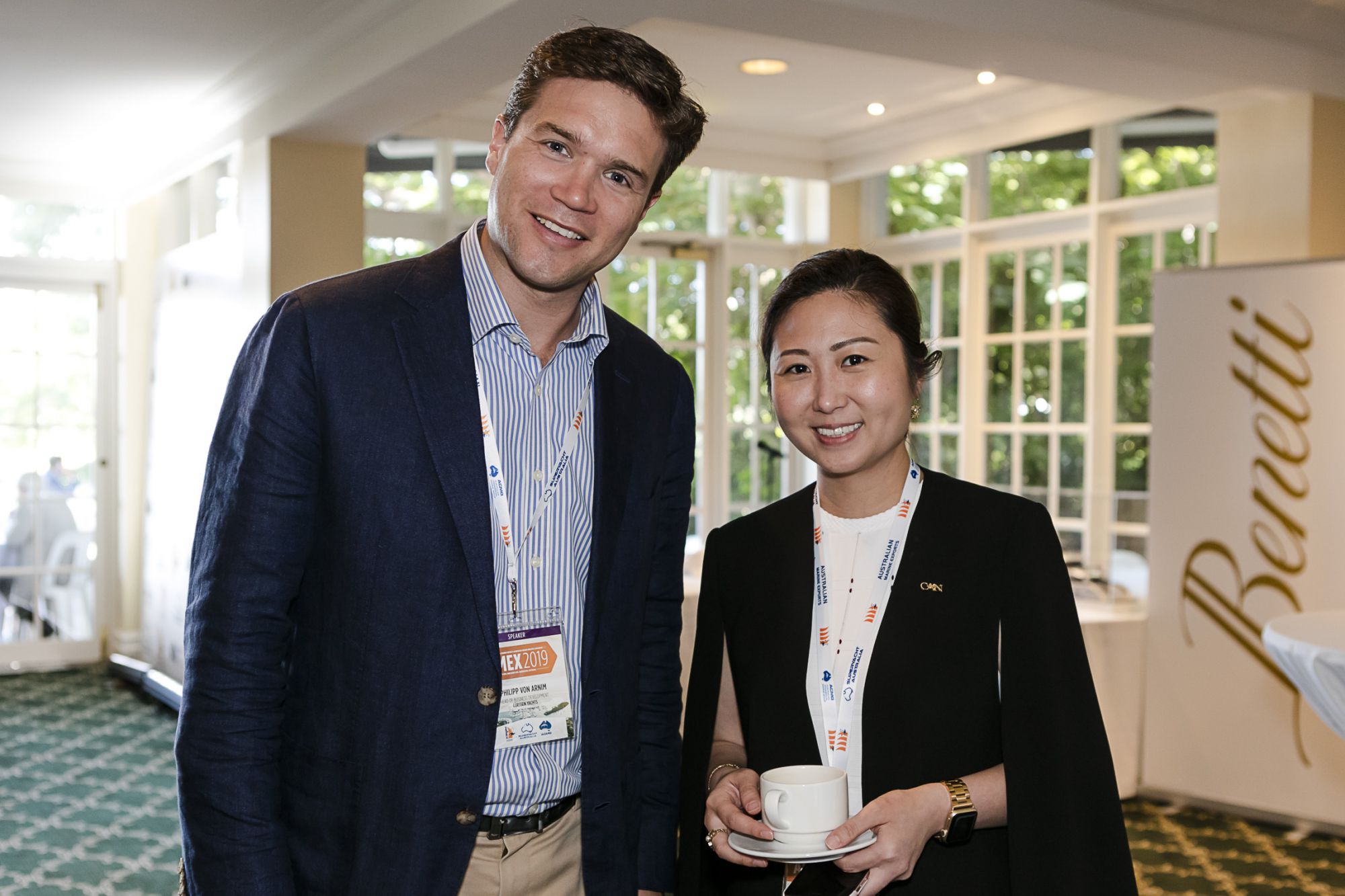 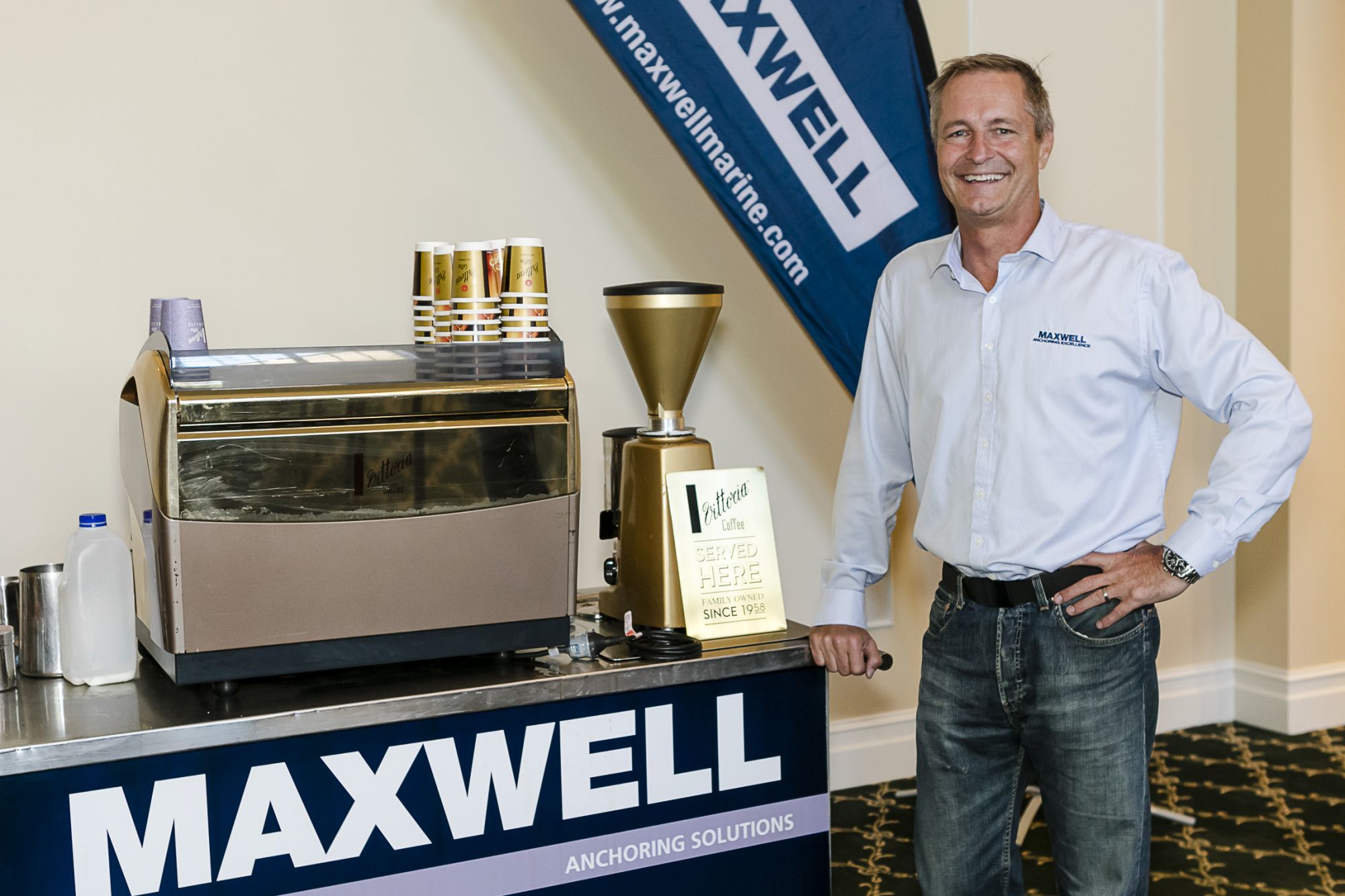 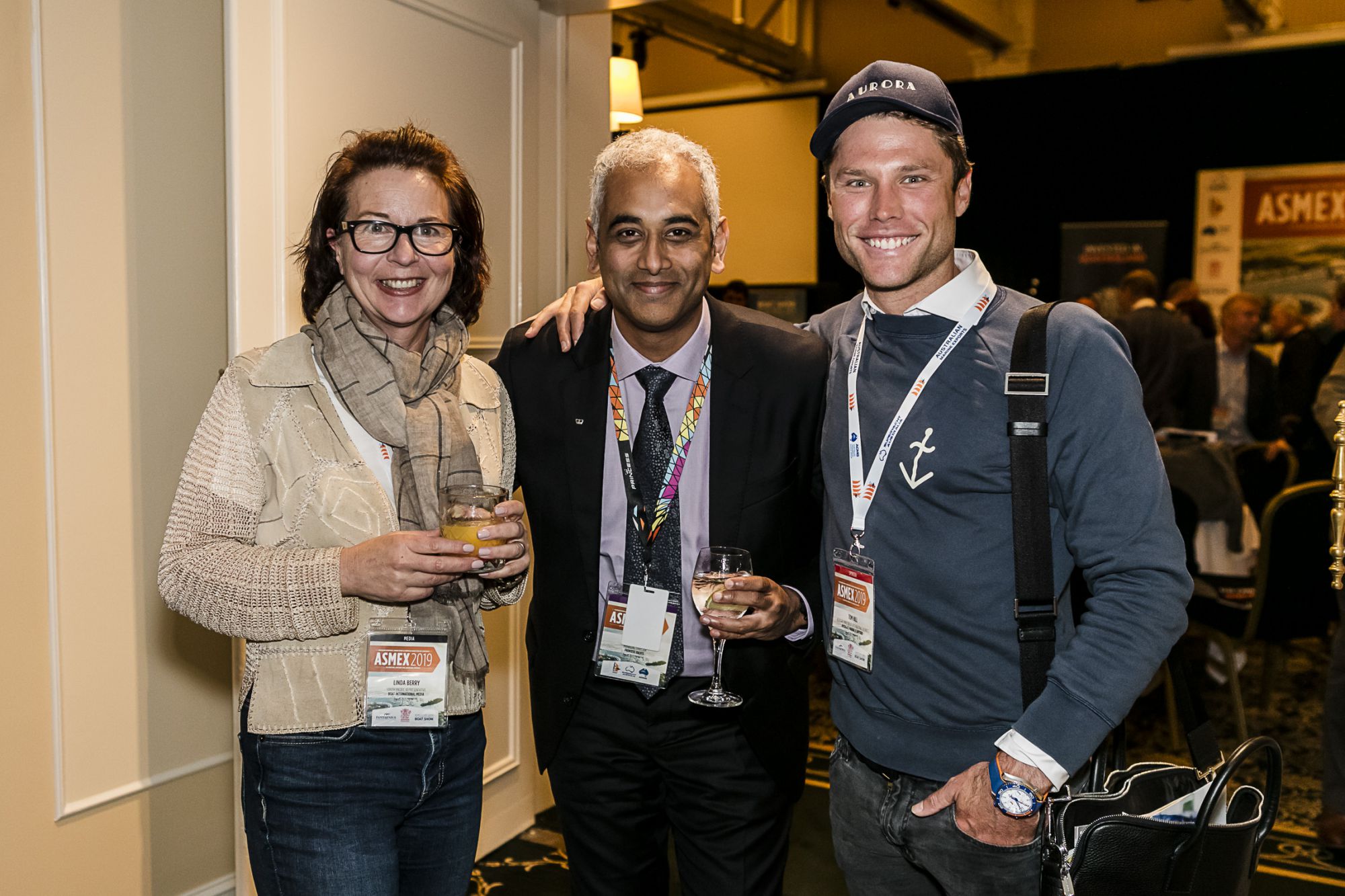 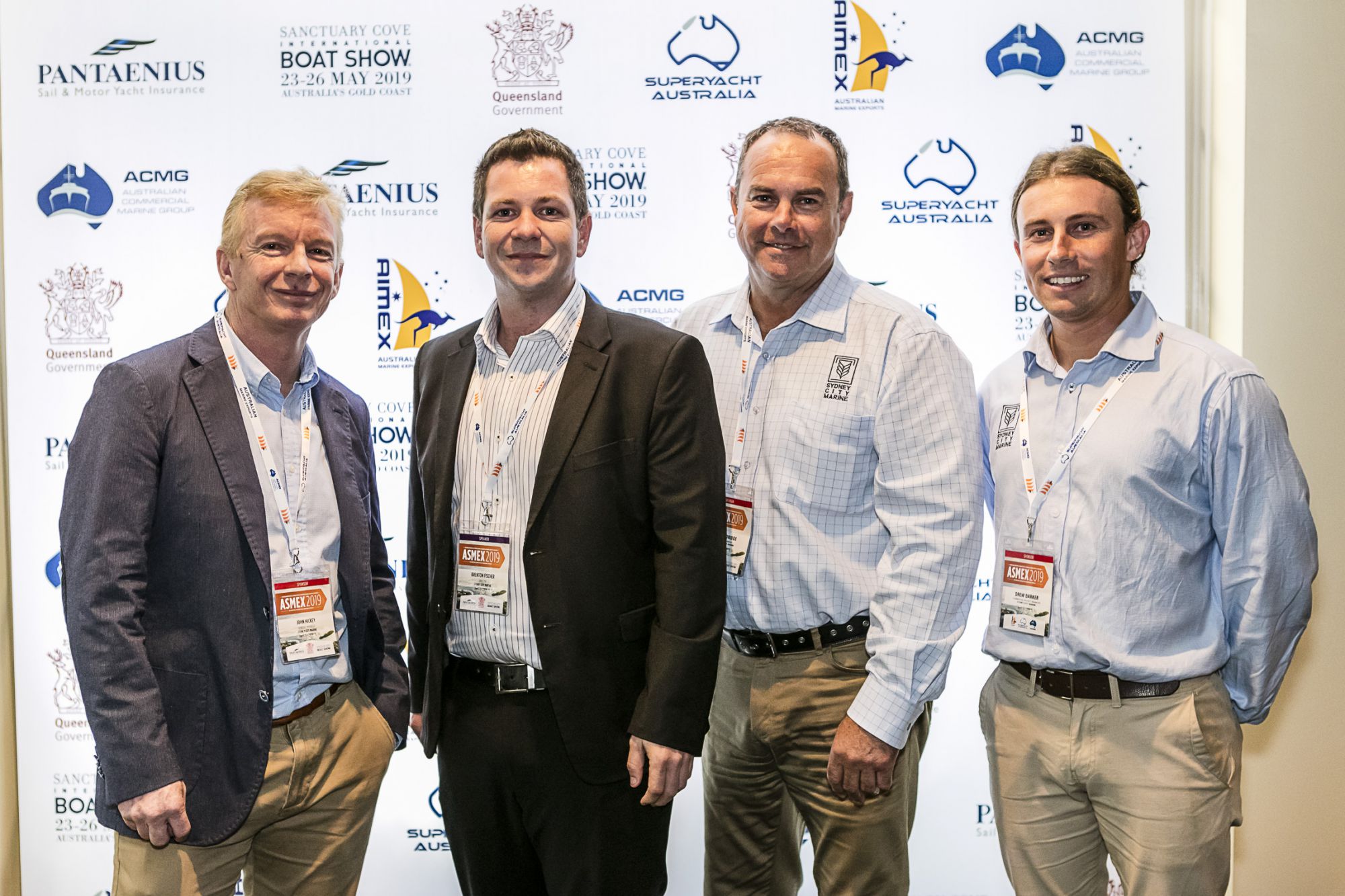 The team from Sydney City Marine.

Another panel discussion on “Innovation and Project Development”, featured speakers with formidable international experience: Sam Sorgiovanni, based in WA and renowned for his designs of superyachts such as MY ANASTASIA, MY BARBARA, MY RUYA, MY JUBILEE, MY HEY JUDE, and the exceptional, highly-awarded WHITE RABBIT, built in Australia by Echo Yachts; Gillian Carter, naval architect from Pacific Marine Design; and Philipp Von Arnim, Head of Business Development, Lürssen Yachts.

While all agreed superyachts are indeed increasing in size, Mr Von Arnim reported that Lürssen was bringing “smaller yachts back in focus”.

“The segment of yachts 50 to 90m is looking very promising for the first time since post-GFC,” he said. “Lürssen got through the GFC very well, and we currently have 12 yachts under construction in that segment. Oceanco and Feadship have all their order books full too.”

Much of the design innovation is being led by owners and their appetite for new systems, health and wellbeing and long-range autonomy.

On the afternoon of the last day of the conference delegates had the choice of attending a Commercial/Export or a Superyacht breakout session.

Mr Redmayne encouraged those gathered to “network better, work together to form an executable strategy. It has to be more than a lot of talk and no action.”

“The theme of this year’s ASMEX conference “Driving Innovation and Sustainability” is very much the core of what we do here in Australia” said Richard Chapman, AIMEX President.

“ASMEX has brought together key decision makers from across the globe and Australia last week to look at opportunities and challenges alike in the marine industry. The calibre of the presenters, the enthusiasm of the delegates and the genuine desire for industry players to collaborate for mutual benefit is encouraging and AIMEX looks forward to facilitating these partnerships and opportunities”

“We have been pleased and proud with the feedback so far from delegates to this year’s ASMEX conference,” said David Good, AIMEX CEO.

“Together, we can grow the local superyacht and broader marine industry, which will lead to increased jobs and prosperity across the board.”