Revamping a classic is never easy, writes Kevin Green, but the Amel 64 strikes a fine balance between modernising these bluewater yachts while retaining the quality for which their french builder is known.

Henri Amel has been producing quality cruisers from his renowned yard in La Rochelle on the rugged west coast of France since 1968, when he created an easy-to-sail yacht that would encourage his wife onto the water. There are now more than 1,400 models sailing, including the two current models, the Amel 55 and the flagship 64.

Thanks to local dealer Vicsail, several Amels have passed through Sydney. An Amel 55 attracted a lot of interest at the Sydney International Boat Show, but the yacht that put the yard on the map was its popular 16-metre (53-foot) Super Maramu, which numbers 500 and remains a sought-after cruiser. I boarded one in the Pacific many years ago, and was impressed with its clever features such as lockable deck hatches and the ketch rig.

Even after Henri Amel gifted the company to his 132 employees, his ideology and in-house build philosophy continued in the later models, as I found when sailing the Amel 55 from its Mediterranean base in Hyères on the beautiful Côte d’Azur, and then boarding some of the 64 models in Hyères and also at La Rochelle. 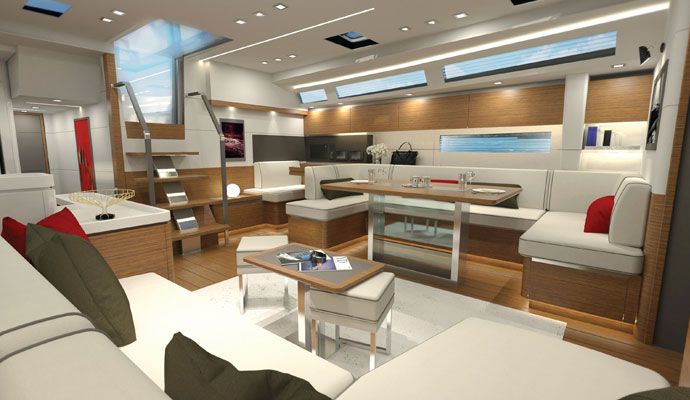 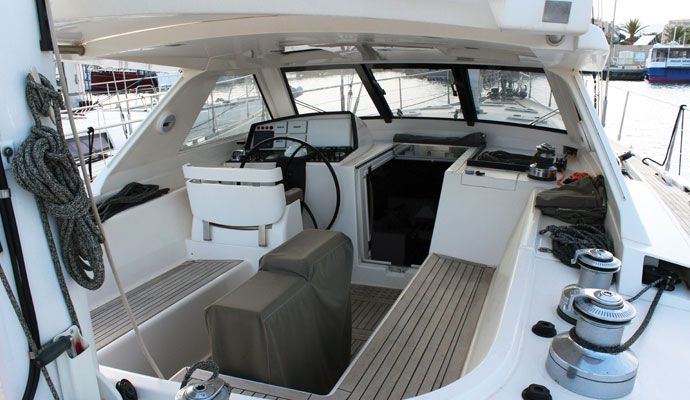 The deep cockpit has all lines running into it for easier handling when cruising. Image by Kevin Green. 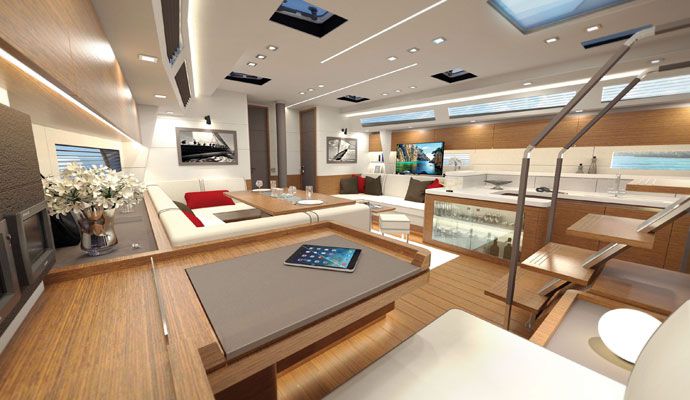 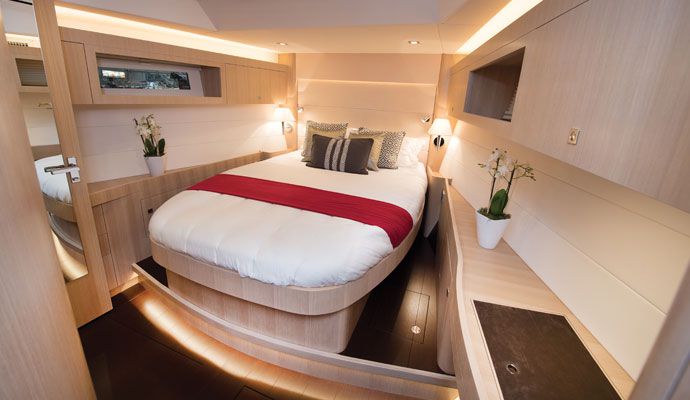 The owner’s cabin has a large island bed and spacious ensuite with separate shower area. 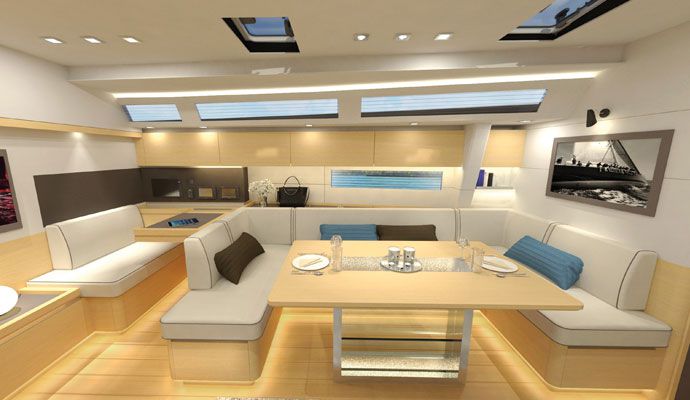 Note the ample opening port lights, which are ideal for the tropics.

The semi-custom design offers several layouts and two- or four-cabin options are possible. The two-cabin has large suites fore and aft, plus a small skipper’s bunk near the transom.
Alternatively, the model I boarded had the owner’s suite forward, with a small skipper’s bunk adjoining. The aft contained a double cabin plus a smaller one alongside with bunks, ideal for the kids.
This comfortable cruising yacht had three bathrooms, with two aft. The owner’s cabin had a large island bed and spacious ensuite with separate shower area. There is even more space below when the dinghy garage isn’t included.

The final big-ticket item the Amel 64 scores is a walk-in engine room. Here I found space to inspect the Steyr six-cylinder, 150hp, 3.2-litre engine and marvel at the very clever engineering done in-house by Amel. The latest models now use a 180hp Volvo.

The Racoupeau design incorporates features that are core to Amel’s popularity with bluewater cruisers: a central cockpit, covered helm and ketch rig. The deep cockpit has all lines running into it through gutters to the electric winches for headsails, mainsail and the mizzen.

The main console bristles with joysticks that control the furling of all sails and the thrusters at both bow and stern are ideal for handling this long-keeled hull. My own handling experience on the 55 was at first challenging due to the long keel, but once I’d mastered the fore and aft thrusters, I easily berthed this yacht in a very tight marina space at Hyères. Under sail with the 55, I hoisted all plane sail in a mere five minutes from this functional cockpit. Impressive.

Deck gear includes Harken winches and blocks. Jammers are on many lines, which allows multiple controls, and of course, the ketch rig spreads the sail area across the genoa, staysail, mainsail and mizzen.

Electronics include a powerful B&G Hydra H5000 computer that runs plotters at the console and the navigation station, plus a second autopilot, Lewmar chain counter, engine controls and more, such as a primary Furuno autopilot and radar.

The rest of the cockpit is devoted to relaxation with a U-shaped, cushioned bench and elongated table plus plenty of under-bench locker storage. 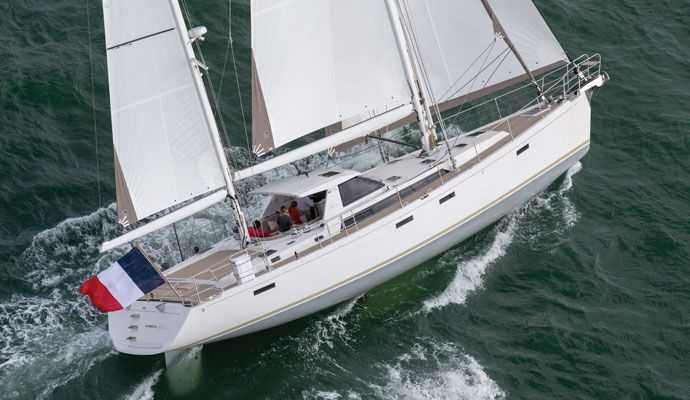 The ketch rig and staysails spread the sail area, and allow the Amel 64 to be handled by a couple.

Looking at the ketch rig with its Swiss alloy spars specially made for Amel, the genoa and staysail have quality Reckmann electric furlers with manual overrides by winch handle. The electric main mast furler system can also be manually operated by unbolting two fixings to allow non-electric operation. (This manual-override is a feature on several parts of the Amel 64).

Other good points include halyard locks on the mast that create a tidy base without the Dyneema lines flailing around.

Line lockers around the aft decks also add to the tidiness that features throughout the Amel. Other clever touches include the boom doubling as a davit, thanks to a strong pully integrated into its end so it can lift heavy outboards and other gear (including rescue crew). The large aft deck has sun pads, and beyond are hatches to the dinghy garage.

Unusually, Amel has used composite, moulded deck material called Amel Teak, which is integrated into the topsides. Unlike teak, it won’t require replacement. It felt sure underfoot, yet even more security is available from the tubed, stainless-steel handrail when walking forward.

At the bow, there are large double rollers with an integrated water system for cleaning the rode and twin two-kilowatt windlasses with capstans. For trade-wind sailing, a carbon bowsprit can fit into the port roller. Like most things on the Amel, the cleats are oversized, including midships.

Behind the windlasses lurks an enormous lazarette with collision bulkhead in front, which houses the drop-down bow thruster. The hawse pipes ensure that the anchor chain won’t catch on anything.

Prolific French designer Olivia Racoupeau has created a sleek hull with tall topsides to maximise volume while retaining the trademark integrated keel gearbox system unique to Amel. Construction is solid GRP, and the mast shrouds use tie rods to connect to the GRP/wood hull grid for rigidity. Watertight bulkheads run throughout the hull, including the walk-in engine room. All major furniture bulkheads are integrated into the hull to increase rigidity.

Similar to the Nautor Swan philosophy, the Amel is fitted out as standard with many liveaboard essentials such as generators (19.5kVA Ona), watermaker, washing machine and ancillaries. Electric power is both 24V and 12V, and ancillary power now comes from a Volvo D4 180hp, which is connected to a unique gearbox system that runs through the keel. On the Amel 55 this initially felt clunky, but worked fine nevertheless.

For strength, both the skeg and keel-fin are part of the mould  with the cast-iron bulb added later. This gives a rather modest ballast ratio of 25 percent, which is in keeping with the conservative sail plan of these sturdily built and well-proven bluewater cruisers.